WHERE IS BUM FARTO?

IT HAS ALL THE TRAPPINGS OF A Hollywood blockbuster: drugs, conspiracy, flashy cars, murdered witnesses, crooked politics, Santeria, an army of undercover officers and an eye-wateringly bad wardrobe. And yet, outside the borders of the tiny island where it all went down some 40 years ago, few are familiar with the tale — that is, unless you happen to belong to the group of particularly vocal Jimmy Buffett fans called Parrot Heads.

If you’re of the right era (and all those margaritas in Margarita- ville haven’t melted your brain over the decades) think back: You might remember Buffett performing in the 1970s while wearing a particularly peculiar white T-shirt. Fans close enough to the stage might have been able to read the cherry red letters that stretched across Buffett’s chest, four words and a question mark that asked one simple, ridiculous question:

“Where is Bum Farto?”

To begin, it should be acknowledged that parents possessing the kinds of surnames well-suited to bullying must perform a particularly sad kind of research prior to deciding on a first name for their child: Can this name be in any way shortened, lengthened or otherwise altered to form a hilarious and uncomfortable moniker that will doom my kid to a lifetime of wedgies and snickering? (see: all Ben Dovers, Dick Longs, former MLB outfielder Rysty Kuntz). Particular care must be taken; those hailing from the clans of Cox, Hooker or Weiner would do best to avoid the name Richard without exception.

Others subscribe to the concept of aptonyms, where one’s last name is particularly suited to, or perhaps the motivating force toward, one’s career choice. Would Marilyn vos Savant have worked so hard to achieve her world-record IQ score if she’d been named Marilyn vos Average? We may never know.

Without a doubt, there are some surnames that, even hyphenated, simply cannot be spared from ridicule. (Perhaps explaining why, though Kuntz was able to graduate to playing for the White Sox, poor Steve Shartz never stood a chance, doomed to the minor leagues for the entirety of his career). Some are so perfectly awful, so comedy-ripe, that to shy away from the obvious associated nickname would do a disservice to its owner. They are so bad they are good; the kinds of names that tend to cause their owner to develop astounding levels of charisma or intelligence in order to compensate, social Darwinism hard at work.

For Joseph Farto, this could not have been truer.

Even at a young age, Farto showed incredible promise. Born in Key West in 1919, Farto grew into a precocious child, a natural smooth talker who spent much of his boyhood hanging around the firehouse located across the street from his father’s house. Having developed a reputation for being able to charm the firemen into slipping him their spare change, his cheeky behavior earned him the nickname “Bum.” Farto, to his enormous credit, leaned into it, proudly adopting the moniker for the rest of his known life.

As a young man, he returned to the firehouse to work as a nozzle man, and by 1964, had worked his way up to fire chief. He basked in the praise of his colleagues and fellow citizens, garnering a reputation as a hard-working, vivacious public figure with a taste for attention. Two years later, a unanimous city commission would recommend he be fired after allegations of Farto’s misuse of department funds. A Civil Service Board conveniently chaired by his nephew ruled to overturn the commission’s verdict, finding Farto guilty only of threatening to fire one of his employees. Instead of dismissal, they recommended a suspension. Thirty days later, Farto was back in the firehouse.

Despite his legal troubles, Farto remained a beloved eccentric in the eyes of Key West. Never one to shy away from attention, he became a flamboyant fixture at local baseball games, where he was granted special permission to drive his neon green sedan into the stadium in order to assemble a Santeria shrine on the car’s fender for luck.

He amassed a growing collection of lurid suits and developed a fondness for flashy gold chains. He took to wearing a set of rose-colored glasses, and enjoyed being recognized as he cruised around town in his luxury, Santeria-shrine-supporting sedan, which he’d personalized with a golden eagle hood ornament. (In case the suit, the chains, the car and the permanent-optimist glasses weren’t obvious enough, he also registered a vanity plate for his car that proclaimed it belonged to “El Jefe.”)

A few years into his reign as chief, Key West’s naval base, active since 1822, closed its doors. The subsequent reduction of the tiny island’s population had an immediate effect on local businesses, save one: the trafficking of drugs into the U.S. through Key West. (Things got so bad that fishermen began pulling up “square grouper,” a nickname given to the bales of marijuana trafficked to the Keys from Colombia.)

It became ludicrously easy to buy drugs in Key West; bumper stickers and T-shirts urged fellow drivers to “Smoke Florida Seafood.” Soon, the influx of marijuana, coupled with the apparent ease with which one could unload drugs in Key West, attracted the drug’s more frenetic cousin, cocaine. The dangerous stimulant fast became an island favorite, and its dealers more brazen, hawking their wares in public. One former assistant prosecutor went so far as to comment that, to Key West residents, selling marijuana was no different than shrimp.

It was easy for Farto to join the game, which he did quickly and successfully, selling both marijuana and cocaine from his favorite bench outside the fire station he captained. Not surprisingly, word trickled north — right alongside the drugs being driven up U.S. 1 to Miami and Tampa, at which point the baton passed to the local drug cartels. The onslaught of drugs trafficked through Key West was too much for Gov. Reubin Askew, who sought the help of the Broward County State Attorney’s Office. That department’s findings were enough to incite a six-month investigation led by the U.S. Drug Enforcement Administration, the Florida Department of Criminal Law Enforcement and the Dade County Organized Crime Bureau. “Operation Conch,” named for the designation locals give to those born on Key West, was a go.

The investigation relied heavily on the help of an informant named Titus Walters, whose deep acquaintance with Key West’s drug scene was the result of his having lived as a junkie for years. Playing to Farto’s weakness for garish attire, Walters finagled the introduction of undercover agent Larry Dollar to Farto, under the guise that the former wished to buy an ounce of cocaine in exchange for a large gold-and-diamond ring. Farto, according to court record, told Dollar that he would contact Manny James, a city attorney and the adopted son of the police chief, in order to complete the deal. James had made a name for himself as the go-to defense for Key West’s upper echelon of drug dealers, and was long-suspected by officials as having been directly involved in the trafficking of drugs himself.

Days later, Walters’ cover as an informant was blown. He was found dead in a bathtub, having been injected with a mixture of heroin, Drano and battery acid, with two bullets in his brain.

After some delay, Farto eventually procured the cocaine, and the exchange — held at the fire station, of course — was caught on film. The operation had the final piece of evidence it needed to convict who they believed to be the reigning bigwigs of Key West’s drug scene. It was a balmy September day when 28 agents arrived in Key West, only days after Farto’s condemnatory photo shoot.

When checking into their motel, the agents were conspicuous not just in their number, but by their having made the No. 1 error that those attempting to fly under the radar in Key West make: They wore ties. Undeterred, they recovered quickly from the gaffe, making sure to provide a plausible cover story, one that a motel clerk would easily believe. The story? That they were all ferocious martial arts fans, and had traveled to Key West for an upcoming karate match.

The next day, phony karate enthusiasts patrolling the island in unmarked cars snatched prominent local Conchs from the street, one by one, to the confusion and horror of local onlookers. People called the police to report what appeared to be a string of kidnappings. A subsequent profile of Operation Conch by Stuart McIver, which appeared in the Sun- Sentinel, described the ensuing pandemonium:

Agents took each of the alleged dealers by surprise, including Bum Farto. (They) also caught up with Manny James, Manuel Currito Ortega and Artie Crespo, a previously convicted gambler. Crespo had been acquitted the night before on a weapons charge. His attorney was Manny James. One of the men, Bobby Marion Francis, was already in jail. He was charged with murdering Titus Walters and later would be convicted of the crime.

In a wild outburst of legal incest, Farto, James and the others were all bailed out by Ortega, a fellow defendant. Bum then hired James to defend him against three charges of drug dealing that could send him to prison for more than 30 years.

Farto was convicted in 30 minutes.

It was supposed to be a day trip. Free on bond, he kissed his wife goodbye, explaining he needed to make a quick visit to a friend up in Miami. He’d see her later that evening, he assured her. Suitcase-less and cheerful, he rented a car (the keys to the fire department’s vehicle having been revoked after his sentencing) and left Key West heading north on U.S.1.

Three weeks passed before his wife, despondent and having exhausted all leads, called the police. A little over a month later, Farto’s rental car was found abandoned in Miami’s Little Havana neighborhood.

Rumors swirled that Farto had absconded to his father’s native Spain, or else gone into hiding in South America. Some pointed to his dedication to Santeria, a religion deeply misunderstood by many locals, who — unfamiliar to the practice — believed it to be dangerous (the occasional appearance of severed cow’s tongues and headless chickens didn’t help).

Many seemed positive that Mafia members in Tampa were responsible, while others believed Colombian drug cartels, anxious over the possibility that Farto might turn informant, had lured him north and then had him “taken out.” His wife, unable to collect Farto’s insurance benefits due to his being labeled a missing person, only succeeded in having her husband declared legally dead after a decade of painful litigation.

Today, an original “Where is Bum Farto?” T-shirt rarely surfaces, the holy grail of Key West eBay auctions for any self-respecting Key West resident. In the very unlikely event that Farto has survived until now, he would have celebrated his 97th birthday this July. Eavesdrop on a conversation between grizzled men at Sloppy Joe’s and you might very well hear an impassioned defense of Farto’s escape, or else a bragging guarantee that someone’s cousin’s sister-in-law has it on good authority that Farto was taken via seaplane to the middle of the Atlantic ocean and made to skydive without a parachute.

Wherever he is, whatever his fate, Farto’s tale has earned him a place among Key West’s most illustrious historical figures. His story has been canonized into Key West’s greatest mysteries; he has been immortalized in both song and book. For better or worse, the island will never forget him — nor will its residents ever stop asking: Where is Bum Farto? ¦ 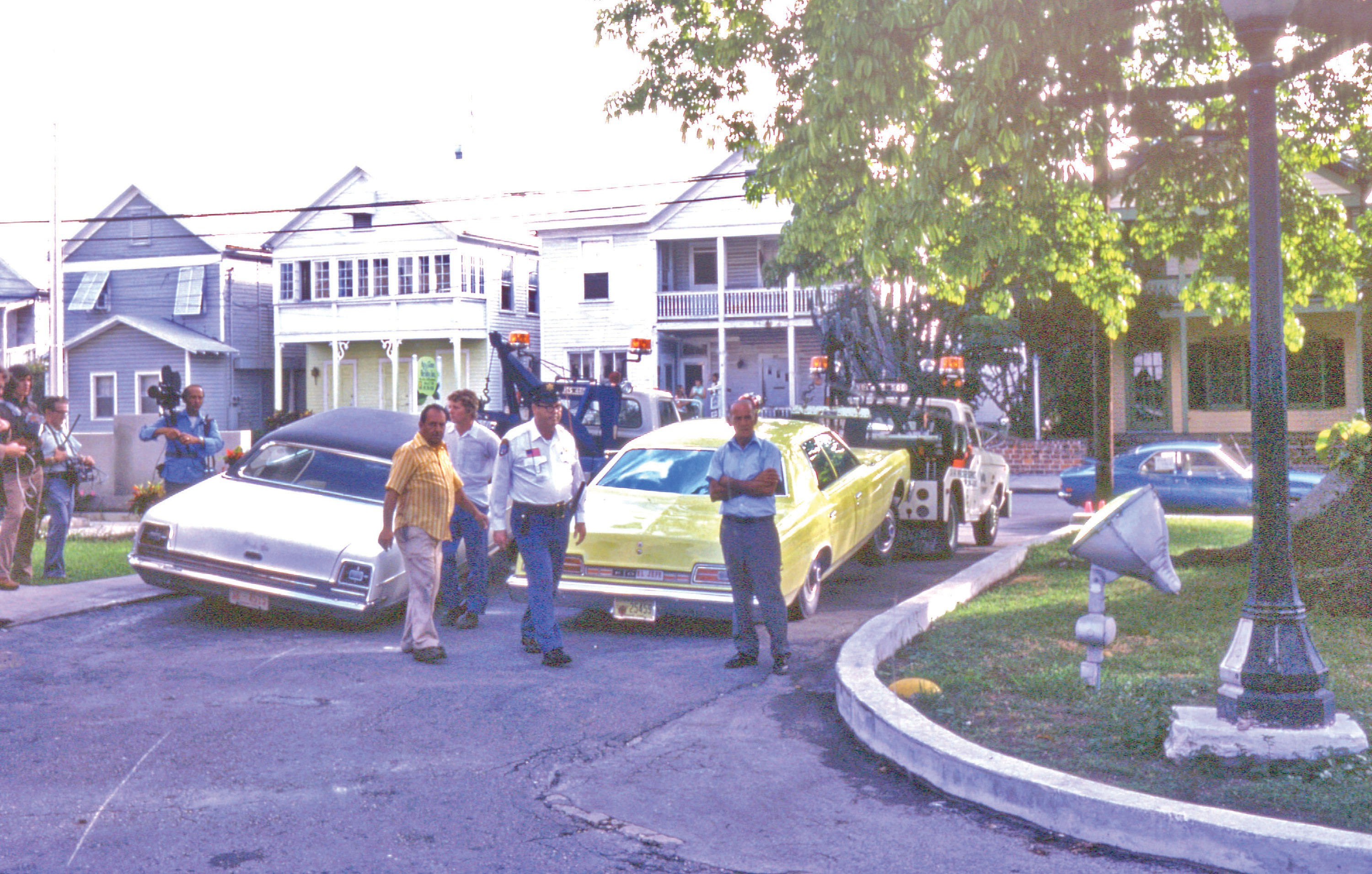 Fire Chief Bum Farto’s car being towed after his arrest during Operation Conch in September 1976. 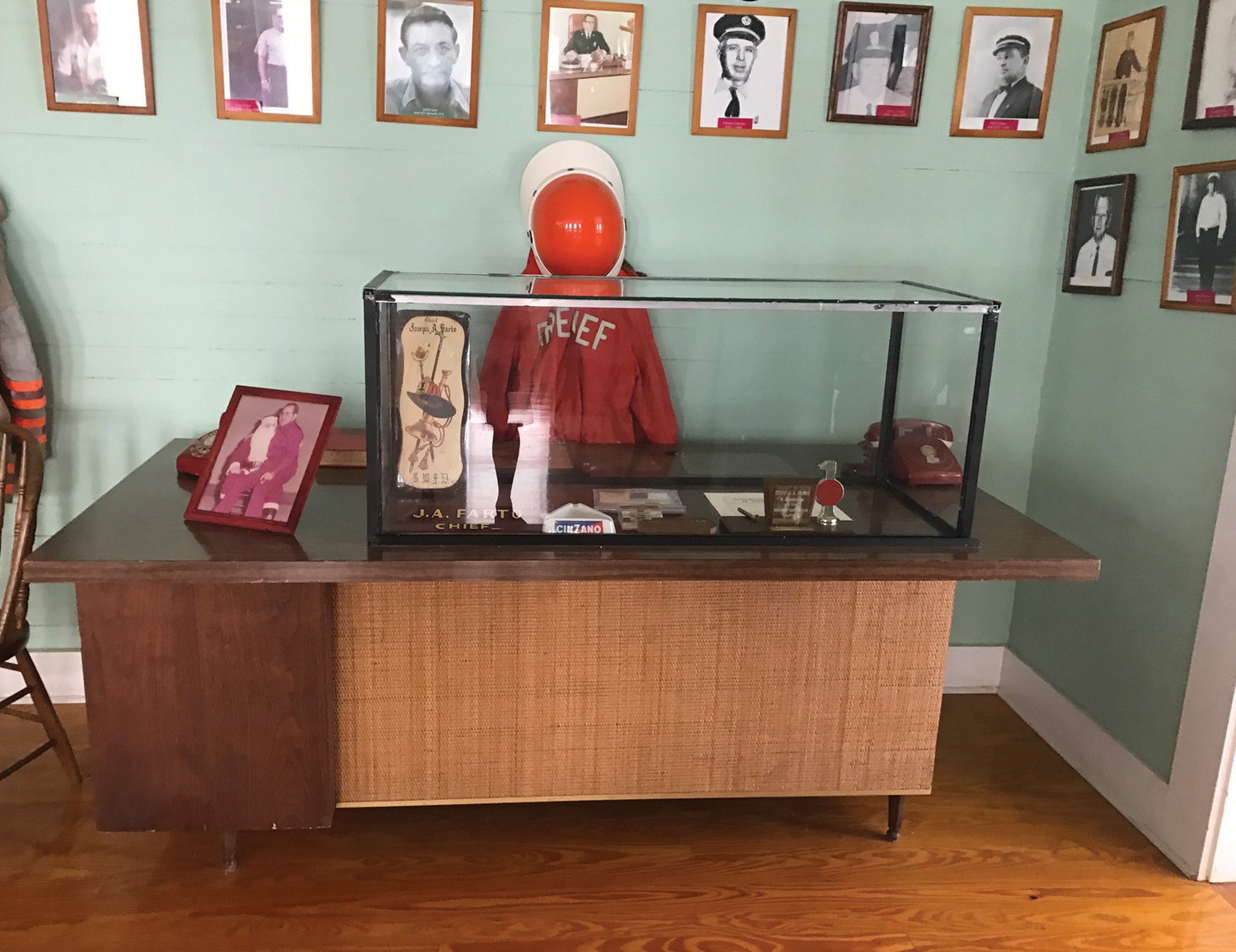 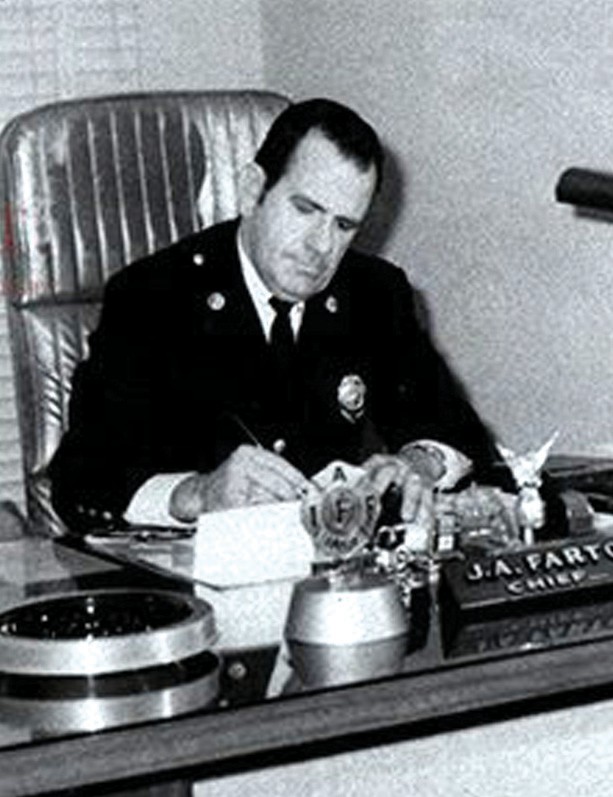 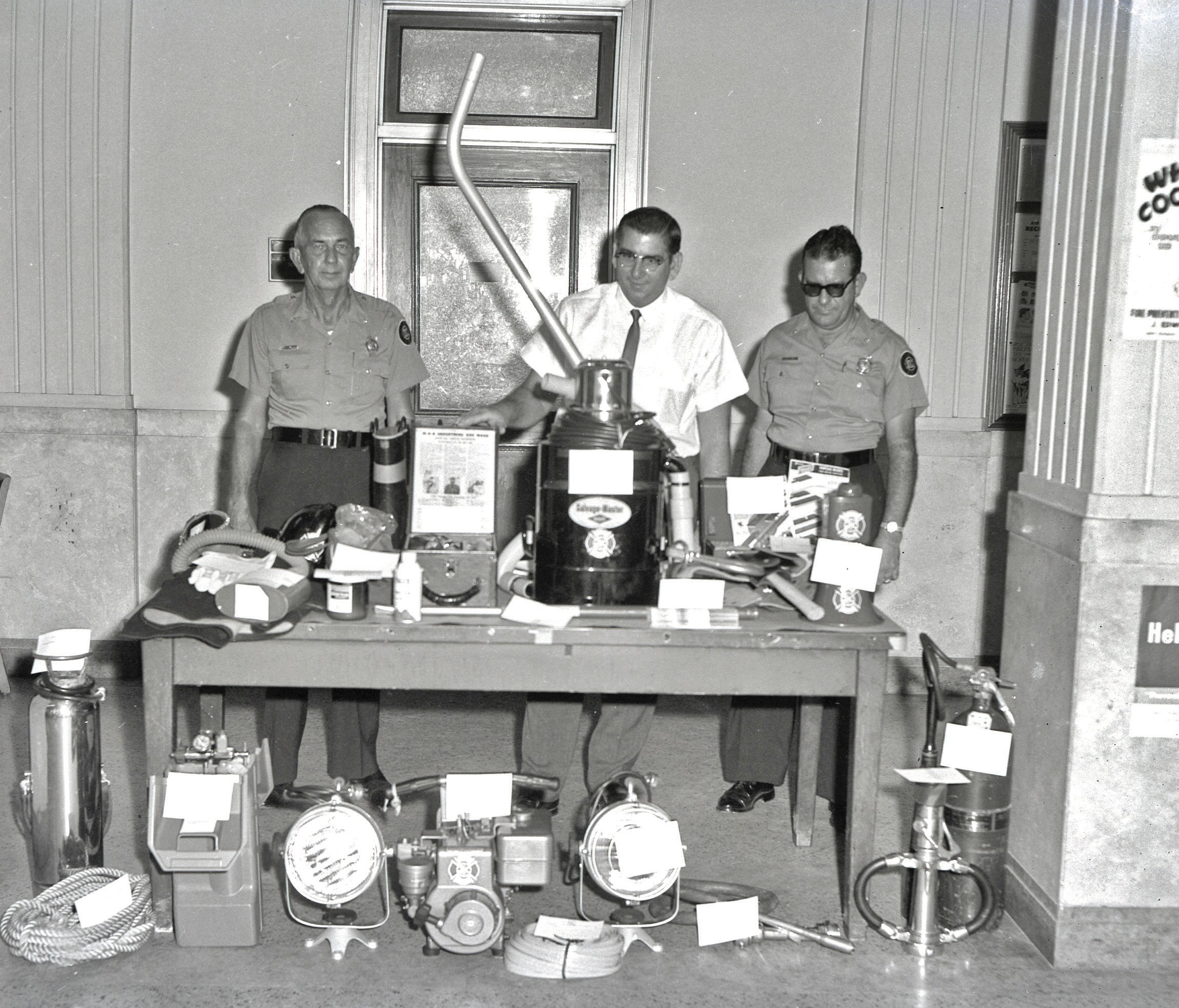 One response to “WHERE IS BUM FARTO?”