WHAT TO DO, WHERE TO GO 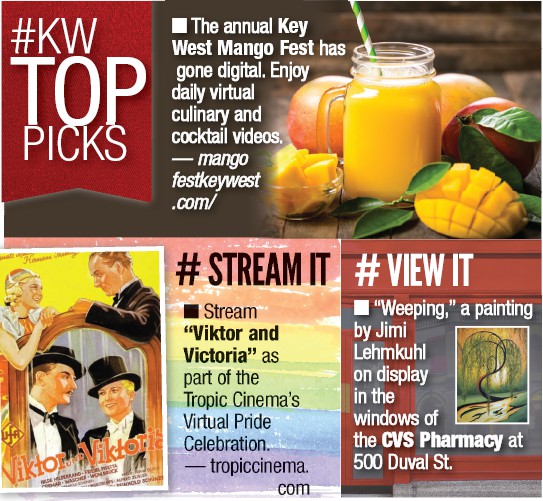 — Submit calendar listings and high-resolution photos to laura. richardson@floridaweekly.com. Email text, jpegs or Word documents are accepted. No pdfs or photos of fliers. The deadline for calendar submissions is noon Saturday.

On the Radio – The Waterfront Playhouse and US1 Radio present Daphne
du Maurier’s “Rebecca,” the next play in
the Waterfront Playhouse Radio Series.
In a lineup of great motion pictures,
“Rebecca” stands as one of the giants.
It is arguably Hitchcock’s greatest film
effort, replete with jolting, slap-in-the-face plot twists and gothic sets. Dark and
moody, it will star Jessica Miano Kruel
as “I,” Christopher Peterson as Mrs.
Danvers and Ross Pipkin as Maxim, costarring Gerri Louise Gates, David Black
and John McDonald. The live broadcast
will air at 8 p.m. on 104.1 FM and US1Radio.com, but spectators are invited to
the theater to watch the voice actors at
work. Tickets are $40 and are sold on a
first-come, first-served basis.

consideration for the annual festival and
banter with special guests. www.
facebook.com/fortmyersfilmfestival/.

Between Two Palms – The Studios
of Key West presents Between Two
Palms, a series of intimate conversations
with art and theater luminaries every
Wednesday at 6 p.m. These conversations will be led by Studios Artistic Associate, Murphy Davis, a Key West/New
York stage director and former Artistic
Director of the Bay Street Theater. This
week, view a live stream discussion and
Q&A with Reed Birney, who played
Vice President Donald Blythe on “House
of Cards.” He is also a distinguished
stage actor, having won the Tony Award
in 2016 for his performance in “The
Humans.” Buy tickets for the series at
tskw.org/between-two-palms/.

Window Art – The corner windows
of the CVS Pharmacy at 500 Duval St.
is host to a display of artwork by local
painters Martha Cook and Jimi Lehmkuhl. Both Martha and Jimi are academically trained painters who have a passion for painting and have made it their
profession. Though Martha’s work is
reflective of impressionism and Jimi’s of
surrealism, there is a cohesion, like two
languages saying the same thing, except
visually. The show runs through Aug. 15.

Virtual Pride at the Tropic – In
lieu of Key West’s traditional Pride Celebration, the Tropic Cinema’s virtual
library features both classic and new
queer cinema films to stream at home.
Virtual offerings chosen specifically for
Pride Month include “The Surrogate,”
“For They Know Not What They Do,”
“Mädchen in Uniform,” “Michael” and
“Victor and Victoria.” Learn more and
stream films at www.tropiccinema.com.

Keys History – The Florida Keys History & Discovery Center offers Facebook live virtual visits at 1 p.m. on
Mondays with Mote Marine Laboratory’s Aquarium Biologist Blake
Terry. At 10 a.m. on Tuesdays and
Thursdays, Discovery Center Curator Brad Bertelli features a glimpse of
the museum through existing exhibits. Every other Wednesday, Bertelli
hosts Cocktails with the Curator, an
open question-and-answer hour about
all things Keys history. On Field Trip
Fridays, Bertelli visits a different historic site in the Upper Keys and provides a brief history lesson at 10 a.m.
And if you miss one of the live events,
you can always access the Discovery
Center’s ever-expanding digital media
offerings on-demand on its YouTube
Channel (search “Florida Keys History
& Discovery Center”). www.
keysdiscovery.com/.

emphasizing harmony with nature.
These works are earth-friendly in the
selection of materials (including recycled and natural material) and themes.
Sculptures by local artists accent the
natural beauty of the conservation site
on Stock Island through July 31, from 10
a.m.-4 p.m. seven days a week. 5210 College Road, Stock Island. www.
keywest.garden/. ¦