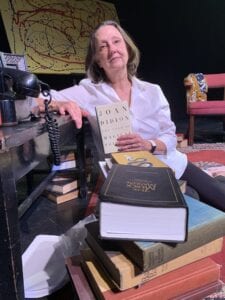 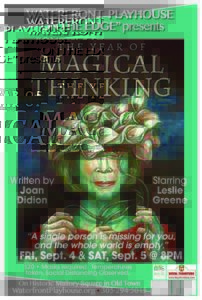 Waterfront Playhouse will present two performances of “The Year of Magical Thinking,” Sept. 4-5.

The award-winning Waterfront Playhouse will present Joan Didion’s “The Year of Magical Thinking” for two performances only, on Sept. 4 and 5 at 8 p.m. Didion is an American writer who engaged audiences in the realities of the counterculture of the 1960s and the Hollywood lifestyle. “The Year of Magical Thinking,” starring Leslie Greene, is a one-woman show that recounts Ms. Didion’s experiences of grief after Dunne’s 2003 death, as well as the hospitalization and death of their daughter.
Days before Dunne’s death, their daughter, Quintana Roo Dunne Michael, was hospitalized in New York with pneumonia which developed into septic shock; she was still unconscious when her father died. In 2004, Quintana was again hospitalized after she fell and hit her head disembarking from a plane in Malibu. She had returned to Malibu, her childhood home, after learning of her father’s death.
“The Year of Magical Thinking” opened on Broadway in 2007 starring Vanessa Redgrave and has been performed throughout the world. Leslie Greene comes to the Waterfront from Baton Rouge and has performed in not only “The Year of Magical Thinking” but productions of “Long Day’s Journey Into Night,” “Who’s Afraid of Virginia Woolf?,” “The Belle of Amherst,” Lillian Hellman’s “Toys in the Attic,” “The Vagina Monologues” and numerous others.
Ms. Greene has never performed in Key West before, but she is a frequent visitor to the island with deep ties to Waterfront Playhouse Artistic Director Tom Thayer and his husband, actor and director John McDonald. “I met Tom in 1971 and subsequently met John in 1989 through the theater in Clarksville, Tennessee,” she said. “It was snowing and John was going back and forth to mass on his bike. One Sunday, it was miserable out — the snow was up to our shins — and John stopped and asked if I’d be interested in reading for a minor role in ‘Toys in the Attic.’”
Years later, Ms. Greene was serendipitously given the opportunity to perform “The Year of Magical Thinking” at a thematically appropriate time in her life. “I considered it to be my theater swan song in Clarksville,” she said. “My mom, who was ill and passed away this last Christmas, was able to be there. Because it’s such a heavy play and I was taking care of my ailing mother, I had been having issues with getting through some stuff, but having her in the audience, I flew. Her eyes didn’t leave me for a minute and her smile was there the whole time — it was like WHAM! What a great way to go out — it was the beginning of the end to a journey.”
Ms. Greene’s performance at the Waterfront will be her second time interpreting Ms. Didion’s words on stage, with a fresh perspective. “My first performance was driven by fear,” she said. “The fear of just getting through it and having people enjoy it and get something from it. I listened to the words, but I didn’t really listen to the words. The more I would do it, the richer it would become for me. Now it’s like I’m with an old friend. My routine is to sit outside in Baton Rouge early in the morning with my dogs and my coffee and the script and it’s like I’m talking to an old friend. Sometimes I’m talking to my dogs, sometimes to an invisible person, sometimes to my mom, sometimes I’m just talking to the universe. The more I do it, the more I see the intent behind the words.”
And Ms. Greene believes Ms. Didion’s words are universal, no matter what your experience with grief. “When I was in my 30s, I thought, ‘Gee, life isn’t that hard, nobody’s died,’” she said. “Right after that, I lost my grandfather, grandmother, father and brother — boom boom boom. Then I lived with my mother while she was dying. Each one of those experiences I got through in a different way. We all get through grief in a different way, but there are also things that are universal, like sorrow or loss when the person who dies means something to you. And that’s what Didion is addressing. It will happen to you. The details will be different, but it will happen. And you’re going to have to figure it out on your own, but eventually we all discover how to cope.”
Tickets are $20 and reservations can be made by calling 305-294-5015 between the hours of 9 a.m. and noon Monday through Friday. Seating is limited to 50 people. Masks are required, temperatures will be taken at the door, social distancing will be observed and the theater will be thoroughly sanitized after each performance.