Up the Keys with Kim Stamps

Sandwiched between the decadent “caviar” lifestyle of South Beach, Miami, and the rum daze of Hemingway’s island, lies a slew of islands, the Florida Keys. Running about 125 miles, this chain of islands is part of a larger archipelago. It slithers through some interesting locales, slides past keys that offer unlocked discoveries, yet all flash by as the drivers gawk at their GPS’s final destination, Key West.

As much as Key West nuzzles at the bottom of the chain, it rises to the top, as the crème de la crème of the Keys. Stirring up tales of pirate ships, “square grouper” and smallest bar shots, it froths around in most prospective visitor’s conversations.

However, if one manages to escape the wantonness of Key West and reach the steps that lead “Up the Keys,” one will step into a world of passionate dedication to the other, “red-headed stepchild” Keys that make up our island chain. Up the Keys is owned and operated by the ebullient Kim Stamps, who has created the ultimate Florida Keys land experience. 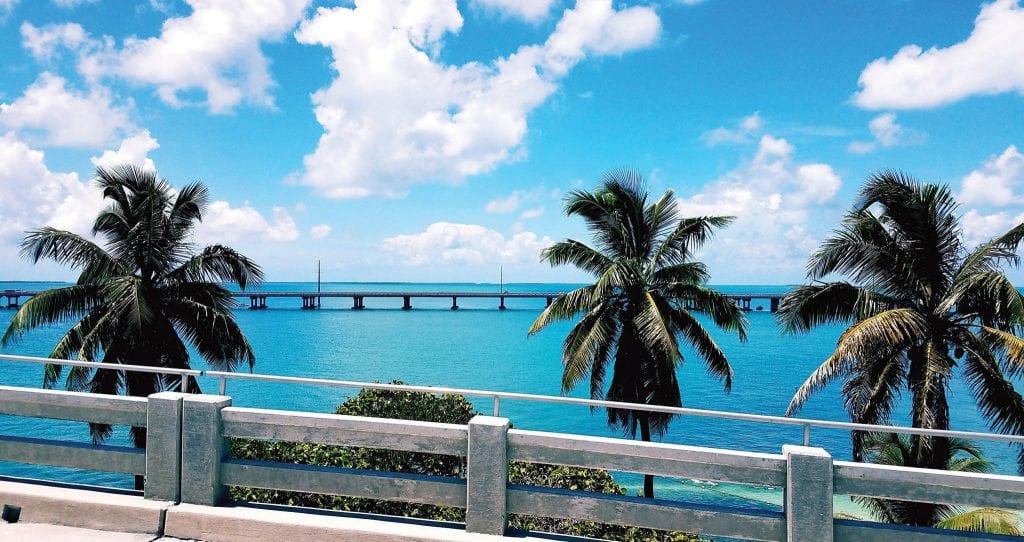 Started by Stamps in March 2016, Up the Keys specializes in eco-tours that take guests from Key West up to Marathon. With her commitment to creating indelible land-based memories, she has over 12 years of tourism and transportation experience. Jumble that in with her intimate connection to nature and spritely demeanor and you have an enticing mix to savor the diverse flora and fauna of the Florida Keys. And today, armed with intrigue and curiosity, I rode along with her, searching for answers about the rest of the Keys.

Her smile grinned wide from a gentle face, wrapping up my morning fog with humbleness and warmth. The tone was set as we ventured toward US 1, the sky boldly clear, allowing for inspiring views as far as the eye could see.

Stamps decided to create her business around her years of experience gained from both living and working in the Keys. Born out of being a sponge for history and a yearning to guide, she went from the cubicle of her cab to the seedlings of a budding business model. 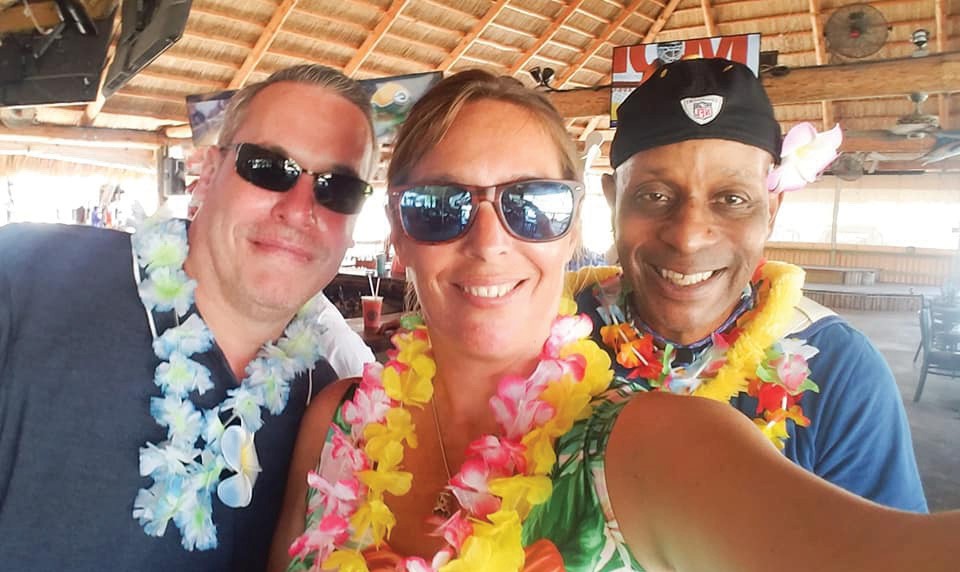 “I always gave suggestions to the occupants of my taxi, whether it was to visit the Blue Hole or search for the Key Deer,” Stamps states. “And then one day I decided, on the advice from my taxi riders, to start running the tours myself.”

With her personal touch gilded with love and belly-sincere laughter, our first slice from the informational pie was about the Key West lighthouse. “It was closer to the water when it was built in 1848, but the Navy dredged out the channel where the cruise ships come in. And they added land, so now it’s pretty far inland,” Stamps sniggers.

She continues with a hint of a “conspiracy theory.” “My theory is they wanted the ships to come across the reef, to wreck, because of the economy of it. There were a few things they did to get them to wreck. It was a huge economy. Between that and the cigar industry, Key West was the richest city, per capita, in 1890 in the United States. There was also a barge with a fake lighthouse that they would move. No joke!” she utters, her laugh enveloping the van. 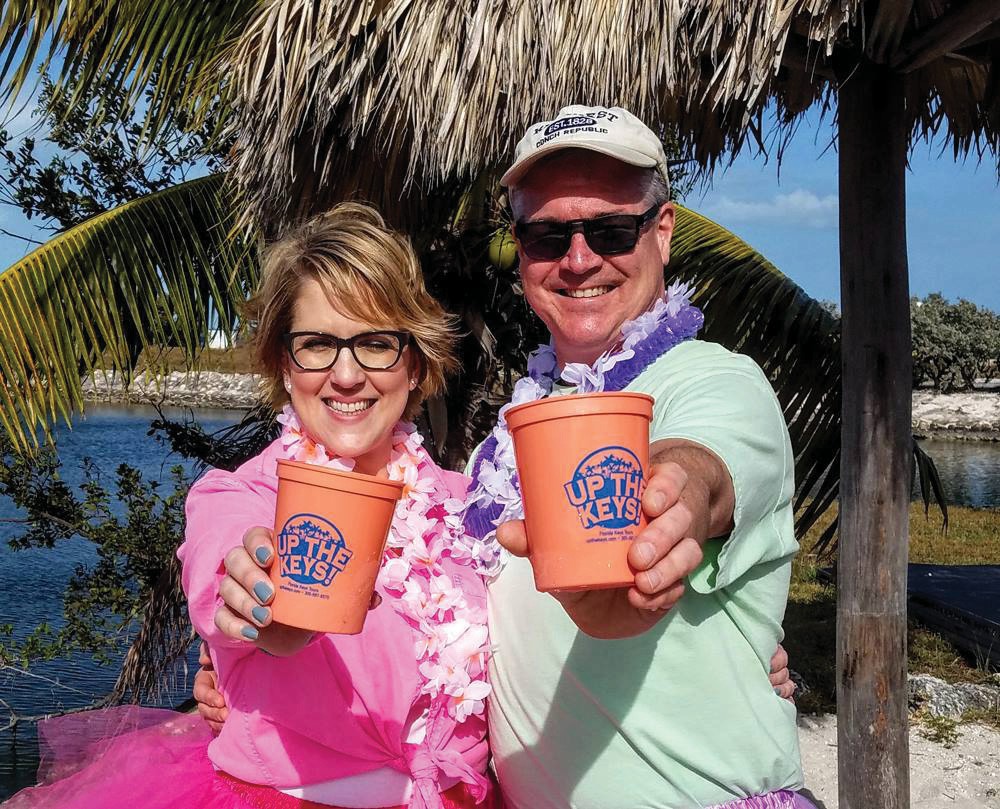 Stuffed full with that informational nugget, we continued north. Peering east toward the shallows of the Atlantic Ocean, we crossed many bridges. They are prevalent up and down the Keys, reminders of the labored sweat and toil spent delivering access to the Southernmost point of the continental United States. And of the foresight of one Henry Flagler.

Stamps chimes in, timing her quest to deliver factual snippets perfectly. “Do you know the Henry Flagler story?” she asks. “He is one of my heroes. Such a visionary, it was amazing. He was partners with John Rockefeller with Standard Oil. Because of that, he became one of the richest men in the world. He and Rockefeller bought railroads to transport the oil.”

A white heron glides across the road, fluttering idly as it rests its “wheels” on a red mangrove branch. Shuffling its feathers into submission, nature listens in as Stamps continues. “It’s the late 1800s and everyone sees the Keys as this mosquito-infested swamp, but he sees a tropical paradise. He developed Florida. Rockefeller and him built a railway line all the way to Homestead, and he wanted to keep going.” 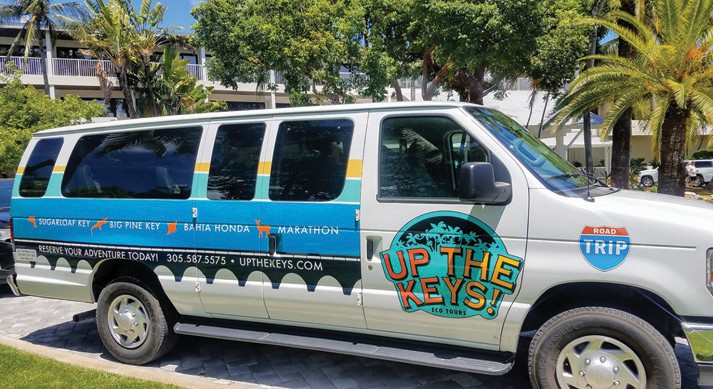 My armament of intrigue is bolstered and craving more. Stamps waxes lyrical the rest of the Flagler legacy. “Rockefeller didn’t want anything to do with the railway construction to Key West,” she continues. “He said it was going to cost way too much money and was an impossible task. So Flagler spent $50 million of his own money in 1912.”

I am shocked at the amount and question Stamps on the value of that money in today’s economy. True to her informational wealth, the answer comes bundling out. “$20 billion! Just on the Key West extension, 126 miles of railway track, 42 bridges and multiple island landfills. It took him less than eight years to build it.” 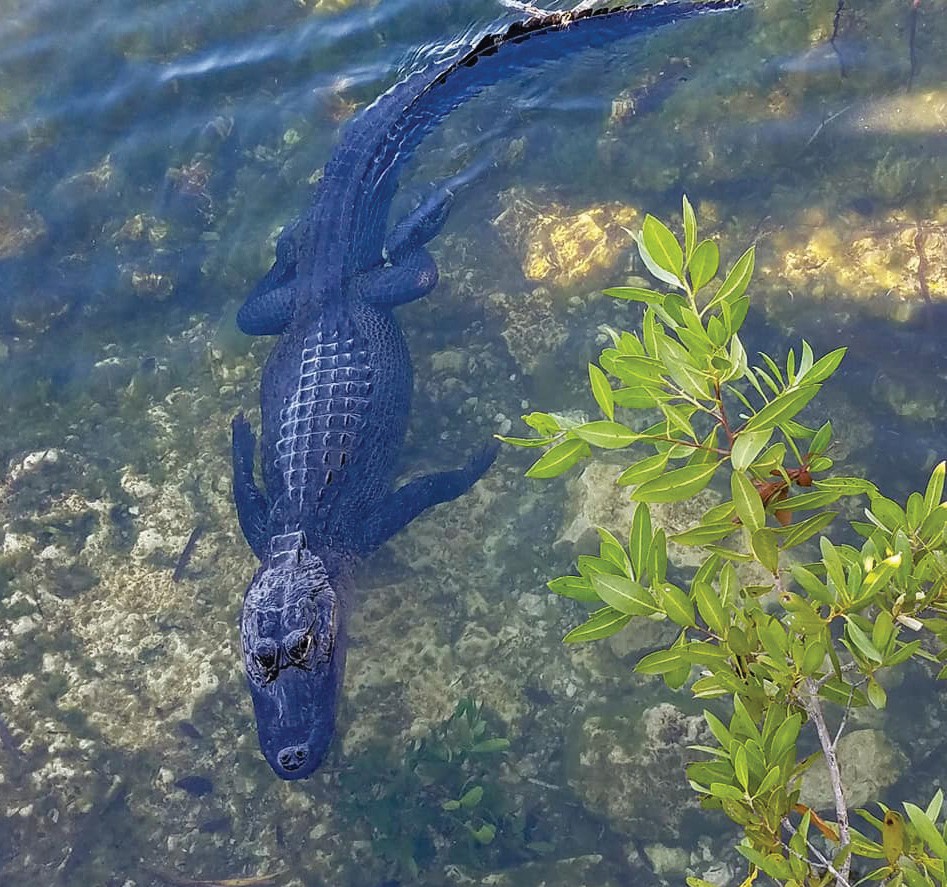 Gasping at Flager’s wealth and generosity, we turn left toward the National Key Deer refuge in Big Pine. Established in 1957, the refuge is home to the buttoncute Key Deer. A sub-species of the Virginia white-tailed deer, they prosper among the backlands, nibbling on grasses, thatch palm berries and mangrove leaves. We spot a young buck, crouched, its mouth mowing the grass.

“They were separated from their white-tail cousins over 15,000 years ago when the glaciers melted and isolated them from the mainland.” The male holds its ground as we drive by, wheels bruising the road. It’s on the endangered list, having been ruthlessly overhunted during a poorly enforced hunting ban from 1930 into the 1940s. Their plight came to fruition in the 1950s, after Glen Allen, an 11-year-old boy passionately wrote pleading missives, initially to President Truman, and then to President Eisenhower. 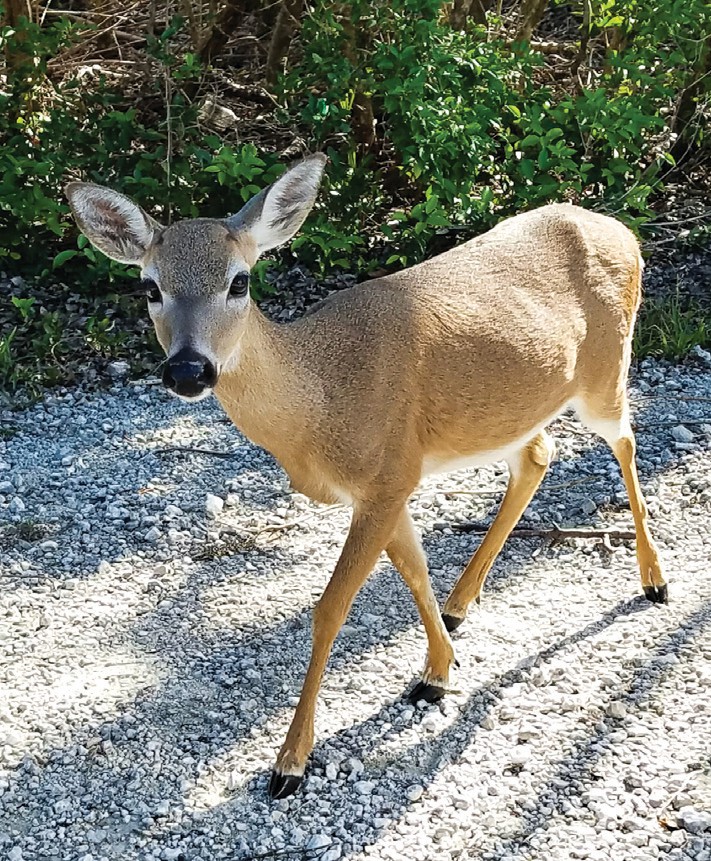 Kim ushers in some startling information. “The scary thing is the Fish and Wildlife Service right now might recommend the Key Deer to be delisted off the endangered species list. They would then be no longer protected under the federal government.”

Her words collide with me, crunching up my face. “In 2016, they did a count of between 800-1,000 deer,” she continues. “With the proposed relaxation of the protective law, the county will be able to issue building permits, which will take away Key Deer habitat. That’s my main concern.”

As she stokes my consternation, the embers of frustration evident in my voice, I notice a board. It stares us down with the total number, to date, of how many deer have been killed this year by motorists. Glancing over, I can only ponder the devastating impact we’ve had on Earth since our conception.

“We lose about 120 each year and throw in the screwworm epidemic of September 2016, the number can fluctuate radically,” she says. Stamps drives through the neighborhood in search of more deer, eventually arriving at the Blue Hole, another integral part of her tour.

Along the way, she explains how the screwworm was eradicated. “Sterile flies. The Panamanian government still sterilizes flies to create a wall between Central and South America, to protect against the screwworm. They FedExed the flies over and in a course of six months, they released about 200 million flies. But it worked. That and the deer being administered, orally, with antiparasitic medicine,” she informs me.

By now, Stamps has sutured her passion for her job into the very lining of my curiosity. Intricately weaving hems of knowledge, she made sure that all questions were answered with panache and honesty. Swelling with pride, she walked us to the Blue Hole.

A narrow pathway guided us to the lookout, an abandoned rock quarry. Containing mostly freshwater, it plays host to a variety of nature’s entertainers, most notably two alligators. We sifted our eyes through the pristine surroundings, searching for wildlife. A green heron tight-roped walked along a narrow branch below us, ecstasy-eyes craving dinner, tadpoles flittered about the surface, a lone osprey flapped its weight effortlessly above us, its partner never too far away (they mate for life) and one of the alligators hugged the quarry’s edge, bringing order to the quarry. 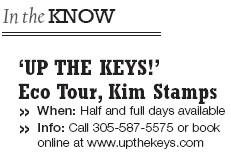 “There is also tarpon here, brought in after Hurricane Wilma in 2005. Whenever we have hurricanes it brings saltwater marine life into the freshwater ‘lens,’” Stamps adds. This tidal exchange, commandeered by gravitational cycles and Mother Nature, allows for a vibrant ecosystem to flourish in the harshest of conditions. We might be privy to this knowledge, yet if only we could be so accommodating to the diversities of the human population, we might be able to coexist at a fraction of how nature conspires to accept everything.

Back in the van our next and final destination was Bahia Honda State Park. About 36 miles from Key West, it is a popular stop for many Florida Keys visitors. Home to the old railway bridge, it’s an imposing sight resting on memories and ingenuity.

Stamps explains that, with the help of German concrete engineers, along with Flagler, they were able to “figure out a formula for concrete that would cure in warm saltwater.” She continues, “When you look at the Bahia Honda piers built back in the day, they are in better condition than the road built above it.”

Atop this site, where the winds hustle and sing below, I peer out to the Atlantic Ocean. Blue butterflies dance their merry way, nothing but the moment at hand. Currents battle each other, pushing and pulling their contents in Earth’s largest washing machine.

Today has been a magical foray into the heart of the Florida Keys, through the sincere soul of Stamps’ unabated love of being nature’s divine messenger. She extols the value of being in symbiosis with nature. A deep-seated connection to the natural world lessens our impact and, with Stamps in the driver’s seat of a most charming tour, we have a leader destined to change our attitude.

Hang up your desires to play just in Key West and hop on one of her tours. You will also be surprised by tales of Hefner’s rabbits and a “License to Kill.” ¦

3 responses to “Up the Keys with Kim Stamps”