Tiny notes on our 40th celebration of Fantasy Fest 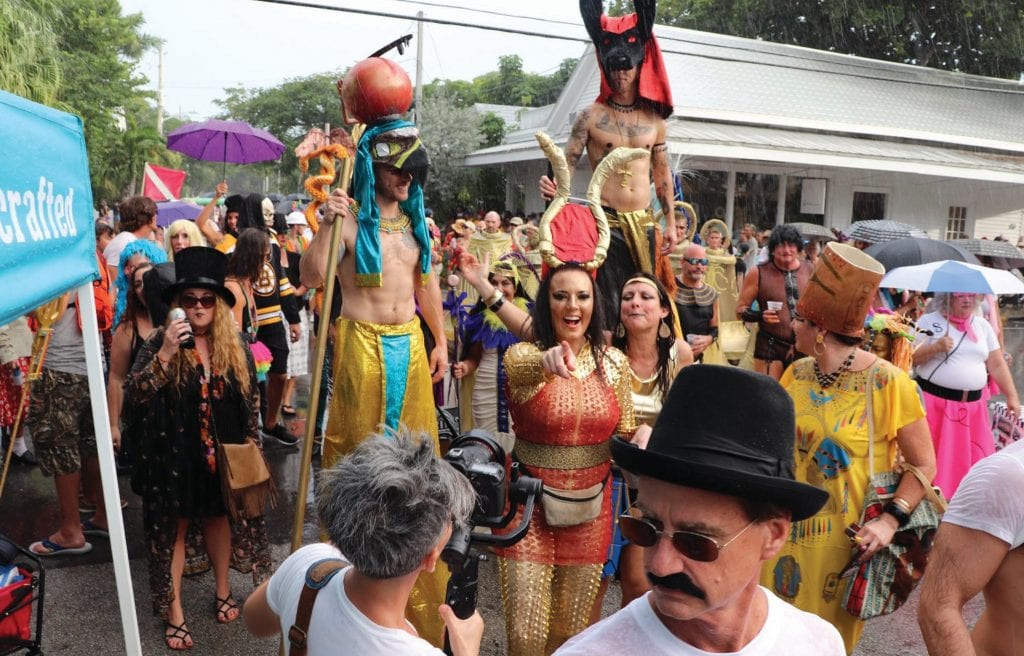 My journal could not fit in the tiny pouch accompanying all of my costumes this year, so my already attached, slightly larger than average head had to make do chronicling all the adventures. Here are tiny notes on our incredible costumed jaunt through Fantasy Fest 2019.

We Are the Champions

The Royal Coronation for this year’s Fantasy Fest King and Queen went off without much of a hitch. Snazzy numbers by candidates and local talents plus interludes by the cast of the Waterfront Playhouse’s “Rocky Horror Picture Show” helped move the whopping three-hour-plus proceedings along. Contrastingly, last year’s showing at the Amphitheater felt like it would never stop.

In the end, the bookie’s favorites claimed the top titles. All four candidates contributed to a combined total of almost $130K for A.H. Monroe. Queen Karen Frank-Noll’s campaign — which many suspect raised the lion’s share — cemented its support early, used a foundation of tried and tested events with one or two experiments sprinkled in, assembled a team of campaign veterans and, importantly, remained pleasant to deal with throughout the weeks. It’s incredible that we forget that if people think you’re nice, they’re more inclined to give you their money. This wasn’t a blisteringly creative powerhouse pool of contestants or one featuring incredibly loud or larger-than-life personalities, but they provided many a great lesson in covering your basics for the next round of royal antics. 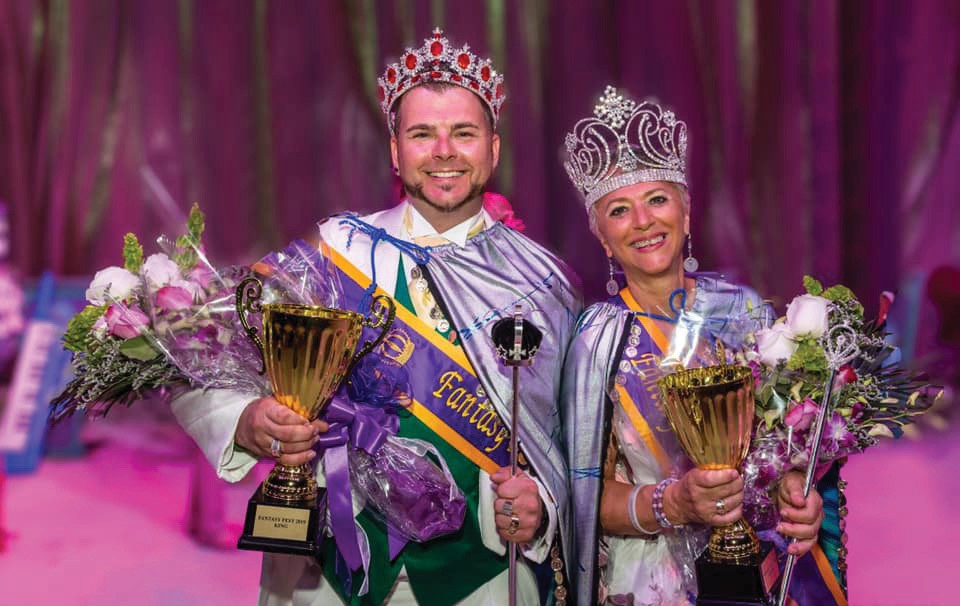 Sacrificing oneself on the altar of fashion was out this season. Simplicity was in. Many island residents confided that a combination of comfort, finances, less time and Fantasy Fest fatigue led them to scale back from last year’s extravagant showings for more efficient affairs. Float elements were refashioned as opposed to being gutted. Walking entries and kinetic apparatuses became more desirable. Glow paint was slapped on instead of intricately stroked into paintings worthy of being displayed at The Louvre. 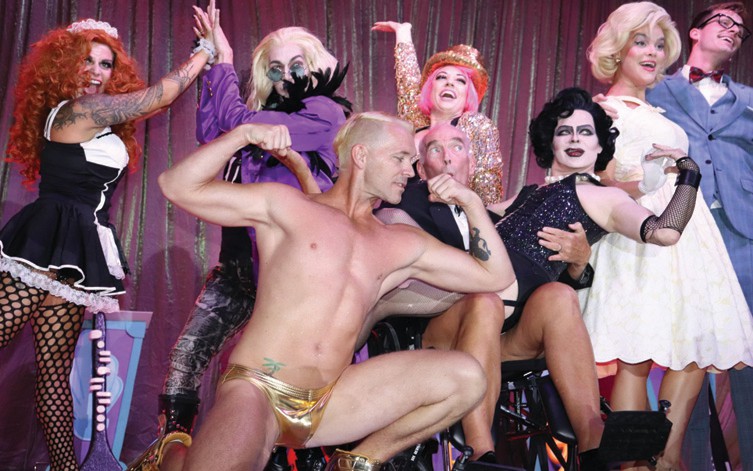 There were absolutely revelers who reached for the stars with theatrical whimsy. The Egyptian gods at the Masquerade March and Mozart ensemble at the Bud Light Parade were exceptional. However, far more revelers seemed quite happy planting their feet firmly on Earth this time around, saving their resources for what they imagine will be a monumental 2020.

This year’s 10th annual Zombie Bike Ride was a smashing success. You definitely have something great when a bunch of mostly sober individuals are willing to roller skate or foot propel their niece’s scooter roughly four miles on what can be some very bumpy roads. I’m looking at you Bertha Street! And I see you, Atlantic Boulevard. It’s the bicycle version of the Locals Parade with a bit more black and white paint. 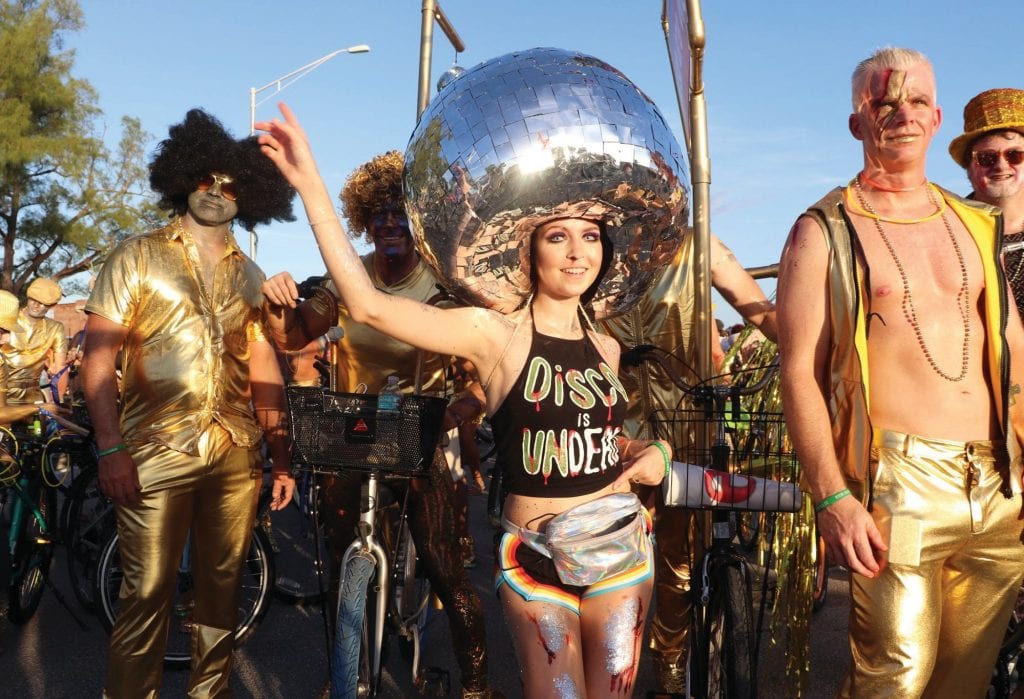 Well, save for the ruined electronics, goopy papier-mâché props and runny gold makeup, the Friday Locals Parade was a surprising success. This despite the evening showers that probably diluted the open containers and countless Jell-O shots and rendered all masqueraders sober. Livers everywhere rejoiced.

Very few participants visibly fled the parade route at the onset of rain. Most leaned into the wet affairs. And in a small way, it showed the tenacity of Key West. That we are hell-bent on having a good time in the face of elements — natural or manmade. This is something to take comfort in. Our inability to immediately give up is striking. The image of Egyptian gods high up on stilts persevering through the dangerously slick asphalt is one for the books … or at least a snapshot of our island’s spirit animal.

Do You Believe in Magic?

The 11th annual TuTu Tuesday festivities continued on at the fascinatingly interconnected General Horseplay complex. It was a strong contender for the best event of the entire festival. While we baked alive in tulle on account of some severe lack of air conditioning and personal space, ask yourself this: How many times have you left a party, only to return once, twice, three and four times? In Key West, this is one of those rare events. The upstairs takeover of the gentlemen’s club was an extraordinary display of miniature raves and amateur pole dancing. A remarkable undertaking complete with a myriad of confusing hallways, secluded balconies and secret clean bathrooms bestowed only to the most curious and attentive of partiers. 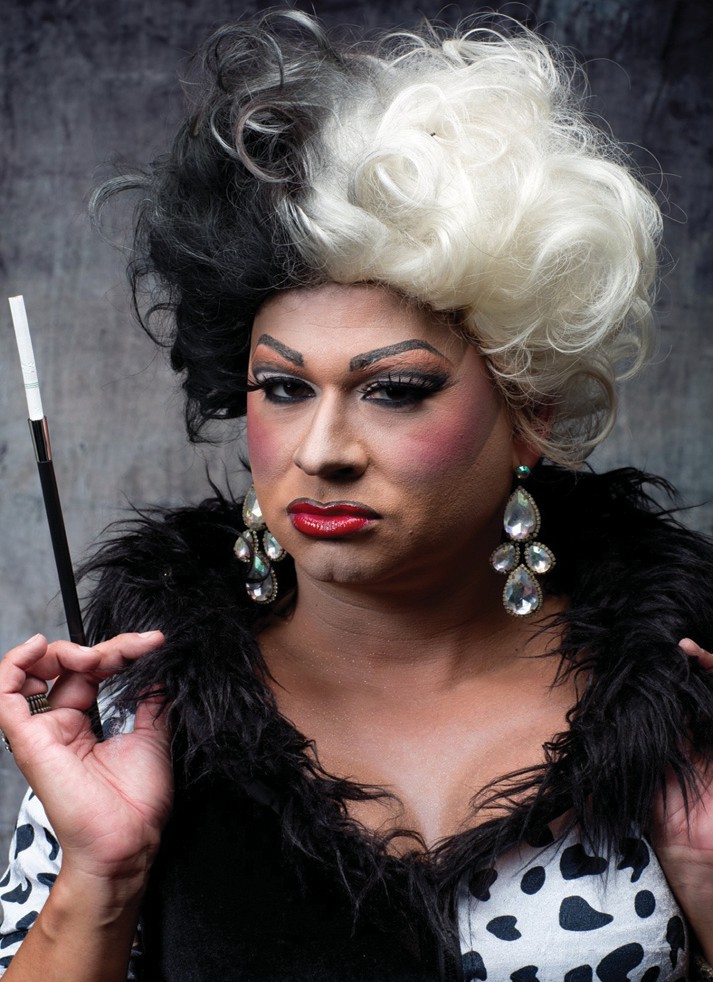 Photographer Thomas Filipkowski (aka Tom Flip) emerged from wherever he’s been the past few months — probably a mix of pensive strolls through Old Town and the new 22&Co. “TuTu” Bar — to give the gift that keeps on giving: professionally shot portraits. The artist behind Heads Up Key West returned for the full-body costumed edition of his signature work. This free (for subjects) experience chronicled the whimsical and outrageous attire donned by locals and visitors for four days of the festival. Shrewdly, while Flip documented the attendees, a nearby inconspicuous camera documented the scene in what will amount to a glorious time-lapse of all of this year’s participants and, interestingly, whatever Flip does when no one is there to be photographed.

The second Thursday of Fantasy Fest saw the gods spare the Headdress Ball, but not much else. The downpour was relentless. The institutional Sloppy Joe’s probably noticed little determent among the crowds for its indoor 40th annual Toga Party. However, many other late-night events saw their numbers plunge as guests bee-lined for shelter and, unfortunately, their hotel rooms.

One well-known paid annual ode to debauchery in the Pink Triangle soon emptied and looked like any other night in the dead of September. And unless held earlier in the day, off Duval events particularly suffered as visitors refused to navigate several blocks of uneven sidewalk slicked with water and washed-off body paint. It would have been interesting to have seen an alternative timeline. One perhaps where the heavy showers were confined to a few minutes that momentarily forced all the headdress spectators onto the Coffee Butler Amphitheater stage to compete in the largest ever batch of entrants.

A Little Party Never Killed Nobody

As the last of this year’s platform boots, synthetic wigs and shiny jumpsuits chugged down Duval atop flatbed trucks, so came the big reveal for Fantasy Fest’s 2020 theme. Except for the fact that hours earlier a stealthy shot of the prepared banner had already made its way around social media. This gave the voices of the internet a head start to weigh in on what already looks like a mixed reaction. “Roaring 2020s & Future Fictions” will see us into the first Fantasy Fest of the next decade. If Amazon thought Key West would drain warehouses across the country of flapper ware and gangster suits come New Year’s Eve, we’ll doubly wipe them out in time for next Halloween.

Separately, the theme’s elements sound fine. “Roaring 2020s” is a once-in-a-century, albeit on the nose, opportunity that businesses will surely seize upon in a Gatsby-esque grab for cash. Meanwhile “Future Fictions” is the first real nod to the island’s literary roots since 1994’s “Mystical Myths and Twisted Tales.” Such a broad scope will certainly provide ample creative choices.

If the past three year’s themes are anything to go off of, then broad appears to be a critical criterion in the selection of themes. Still, the marriage of the two phrases seems a bit odd. Why not one or the other? And after the recency of 2017’s “Time Travel Unravels” and this year’s musical throwback “In Tune But … Off Key,” perhaps something free from time specificity would be better suited. At the very least, it raises the question of how exactly these themes are chosen and whether the process should be opened to involve more locals and businesses — the ones spending countless resources on costumes, floats, marketing and events to make the festivities so memorable. In any event, WeBeFit will surely rise to the occasion. ¦