The Ultimate Brunch at the Hot Tin Roof 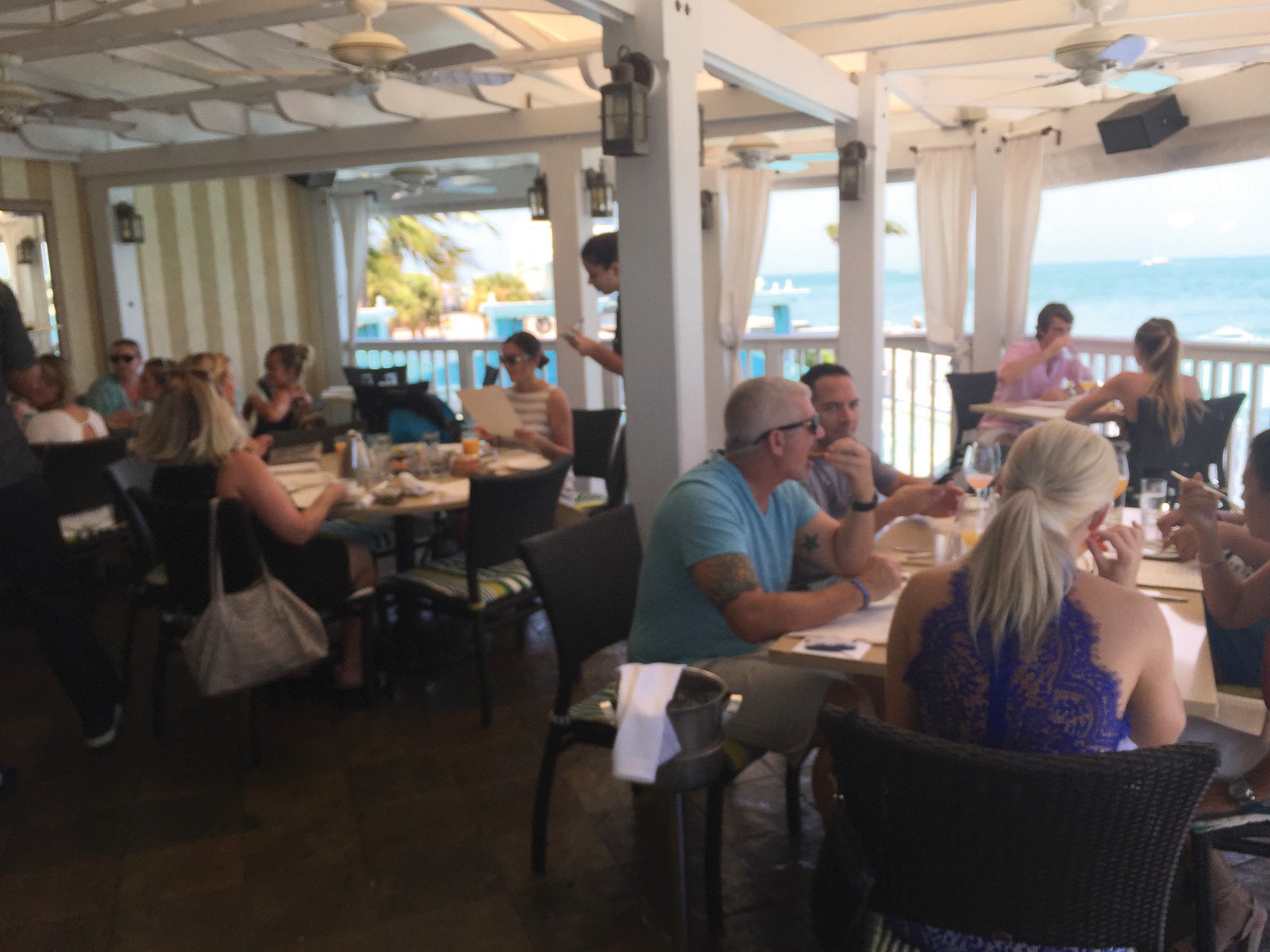 Every Sunday morning the otherwise dimly lit dining room of Hot Tin Roof at Ocean Key Resort & Spa transforms from romantic date night into a bright and energetic social gathering filled with the sounds of glasses clinking between the final scrapes of forks sand the occasional carefree laughter. Outside on the terrace, overlooking where the ocean divides the island from Sunset Key, families and friends are celebrating the simple occasion that they are all together enjoying brunch on an island at the tip of the Caribbean.

There is not one spare seat in the house, which Rodger Levering, Ocean Key’s food and beverage director, tells me is almost always the case on a Sunday at noon. We opt to sit next to the hostess stand where manager Jessica Roden greets guests as they arrive for their much-anticipated reservation. 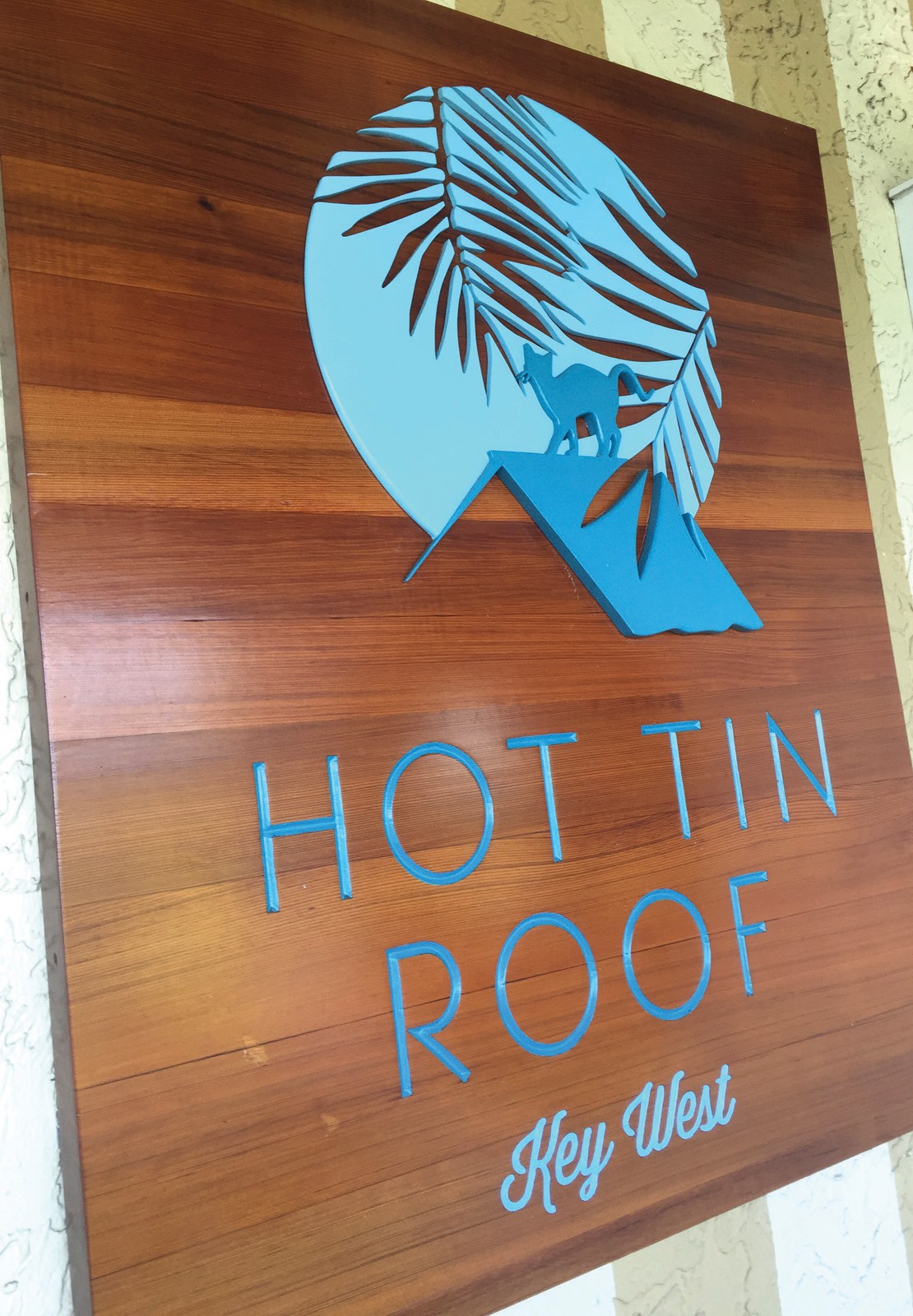 “Is there shade outside?” one worried couple asks.

“There is shade everywhere,” she smiles before inviting them to cool down by getting things started at the Bloody Mary bar.

The Bloody Mary station is the first thing you see when you step in the door at Hot Tin Roof. Over two dozen small batch hot sauces, jars of artisanal pickles, filthy olives, house-blackened shrimp and crispy bacon line the length of the entire marbled bar, with no limit to what or how much you can take when making your own version of the infamous cocktail. Behind the counter, a cheerful bartender pours a long shot of vodka for him and a glass of sparkling wine for her. In addition to the all you can drink Bloody Marys, the generous brunch also includes unlimited mimosas just in case you need to lighten things up. 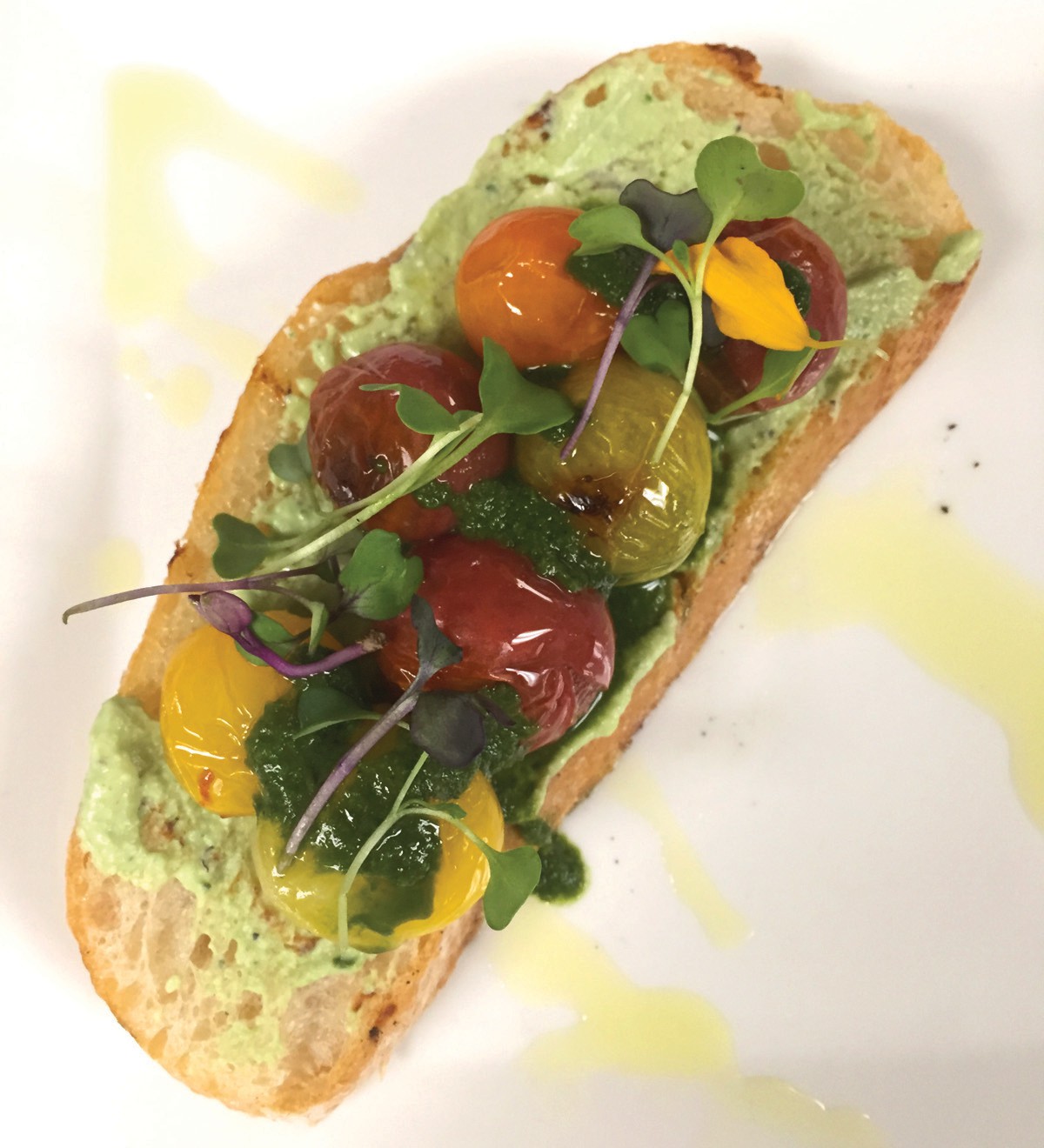 Once seated, diners are presented with a tapas menu of 30 brunch items. Automatically a raw bar of mussels, shrimp, clams and oysters is placed on the table along with bacon cinnamon rolls. The rest of the meal is then left up to the guests to decide while the servers continue to take one round of orders at a time until the last person throws in the napkin and says he or she is full. The entire ritual can take up a good part of the morning and last into the early afternoon.

Rodger has been at Ocean Key since 2001. He was part of the team that started the whole brunch phenomenon in 2012 after being inspired by a similar style of menu at sister resort, Little Palm Island. 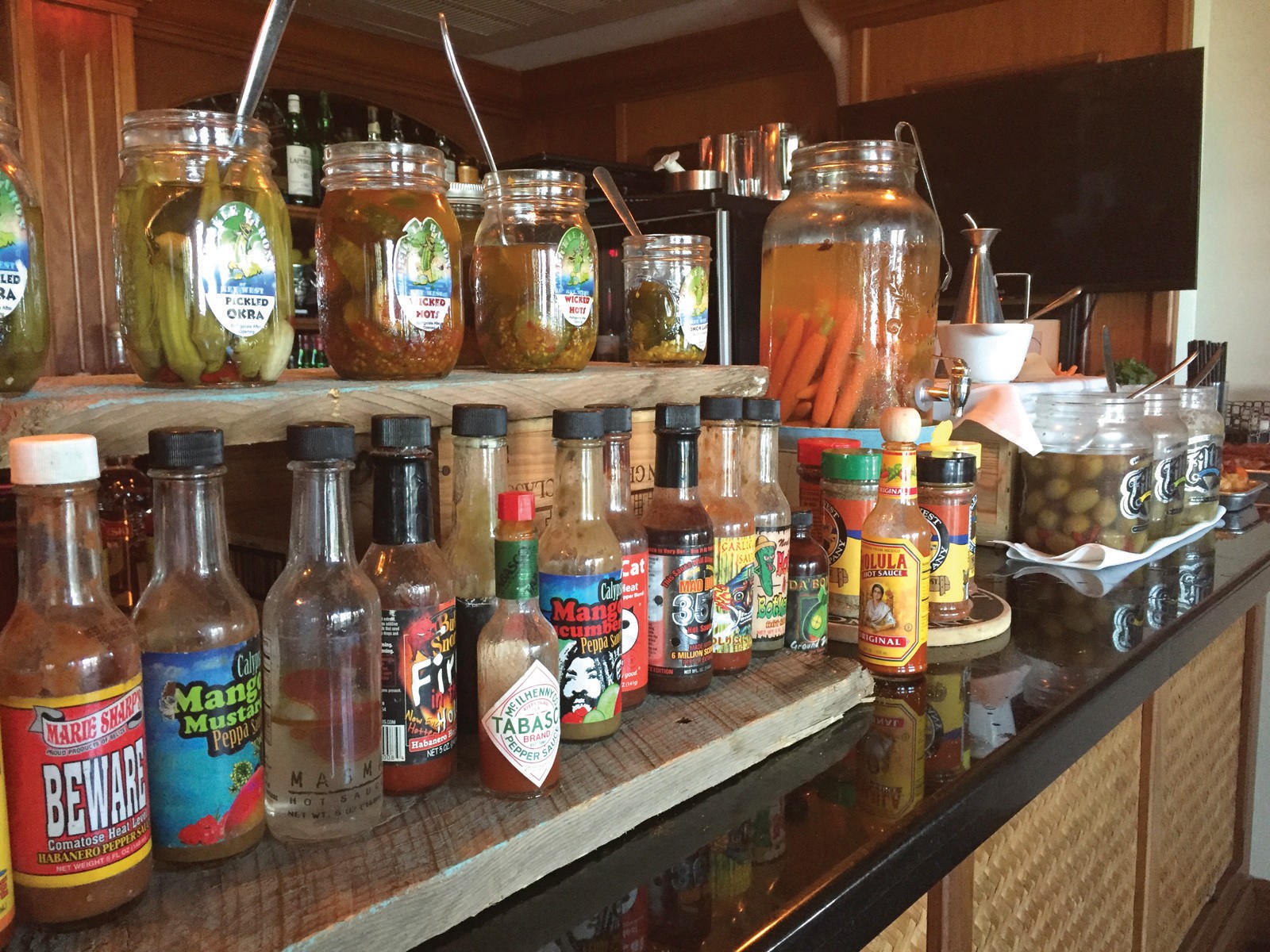 “It’s casual with the essence of fine dining. We wanted to do something unique. Instead of the usual all you can eat buffet where everyone has to get up to refill their own plates, we wanted something a little slower, more leisurely where people can sit and enjoy each other’s company and the food is brought to you,” Rodger explains, “We do brunch service from 11:30 until 2 p.m., but only take reservations up to 12:45 p.m. At this rate, it can take people up to two hours to finish their meal.”

“So, what if I come in without a reservation? Is it possible to get a seat without one?” I ask, but one look back at the buzzing dining room gives me my answer even before he does. 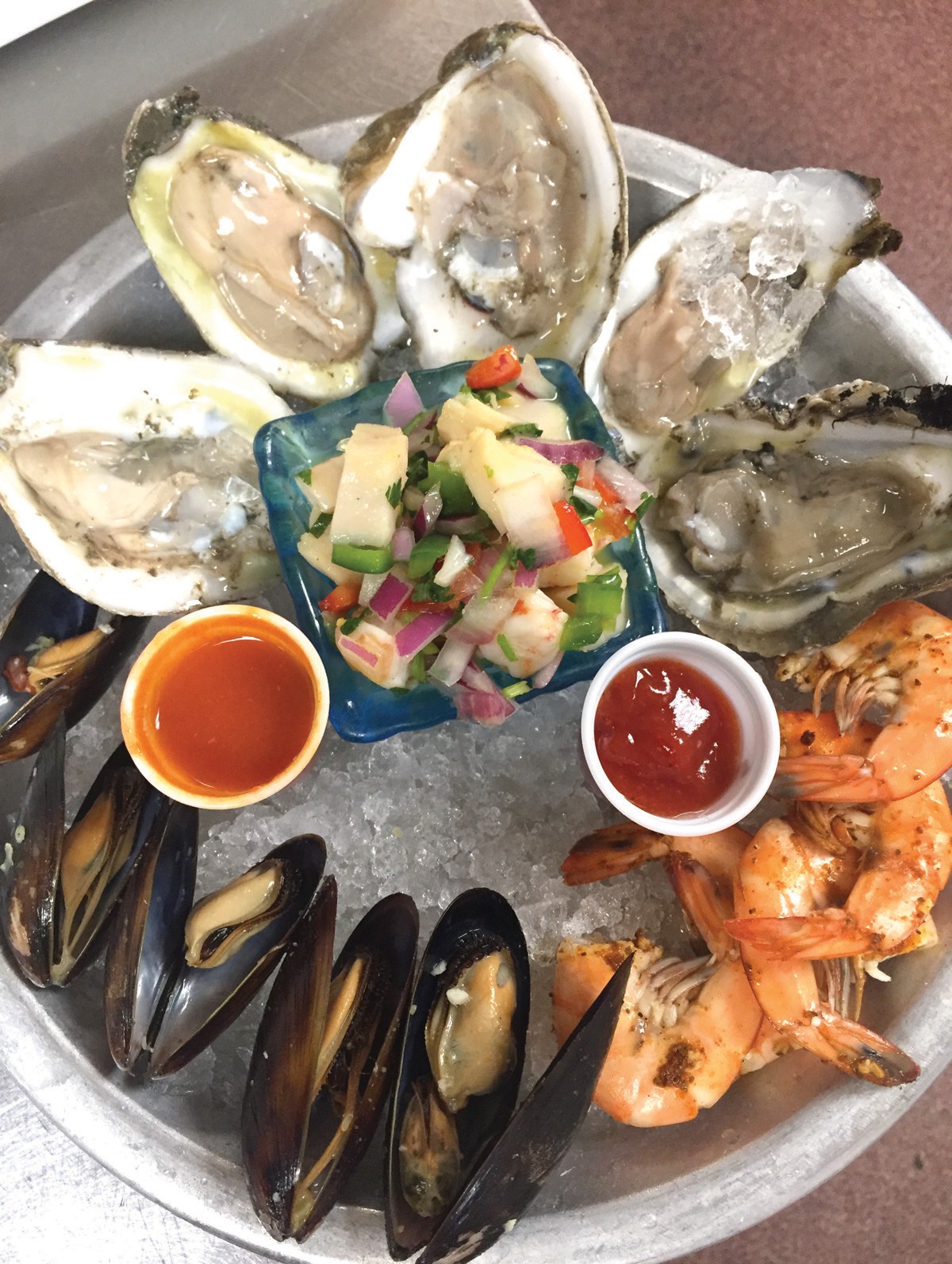 Still, he says “then you just gotta get lucky. Reservations are sought out two weeks in advance and mostly by locals.”

At this point I get a little nervous about having asked to meet with executive chef Scott Mauren during what is apparently his peak time executing orders. Surely, he doesn’t need some writer lurking around asking him questions while he is trying to work. As anticipated, my hesitations are confirmed when I enter the spotless, tight quarters where all the food that is offered on the resort is prepared. Everything that is served at Hot Tin Roof, its casus al outdoor restaurant Sunset Pier and for all banquet and dining operations comes out of that one and only kitchen and here I am asking him how he’s doing.

I attempt to wedge myself in somewhere between a prep table and a service window, A constant rotation of waiters and cooks maintains an atmosphere of efficiency, order and dedicated composure. I watch Chef Mauren wipe stray sauce from a plate before he calls for a garnish of micro-greens on another plate.

A New Jersey native who was living in Orlando when “serendipity” led him to Key West, Chef Mauren describes his service as hectic and his menu as eclectic.

“Among the 60 or 70 guests that we are able to serve each brunch, 30-40 plates of food are constantly going out of the kitchen each hour,” he says, “We’ve been known to do up to 640 small plates in one sitting. It’s fast paced.”

It sure is, I think as I move to the side to keep from tripping a waiter in a hurry.

“The brunch menu is also always evolving at Hot Tin Roof. There are a handful of dishes that we are constantly perfecting. We keep them on the menu for a few weeks and then change it up so that there is almost always something new on the menu.”

Among the bustle I manage to quickly snap a photo of blistered tomatoes with basil ricotta on grilled ciabatta followed by a deviled egg trio of buffalo, hummus and truffle. A fried chicken and bacon-cheddar waffle goes flying by too fast for me to capture its fancy presentation and an immaculate raw bar almost makes its way out as well. I get the shot and take my cue. It’s time for me to get out of my tiny corner so that I can let the kitchen get its momentum back.

“What I like about working here is that we are always continuing to build on what we are doing. We have a great team and after a long shift you leave here feeling good,” he says before turning back to the window.

After thanking him for his time, I quietly let myself out and head back into the packed dining room. Guests, just as they were before, are lost in the moment of bonding at a leisurely pace, over shared plates and bottomless cocktails, that can only be described as brunch.

Reservations are recommended by visiting www.OpenTable.com. ¦