The Studios of Key West: Island’s creative energy at play 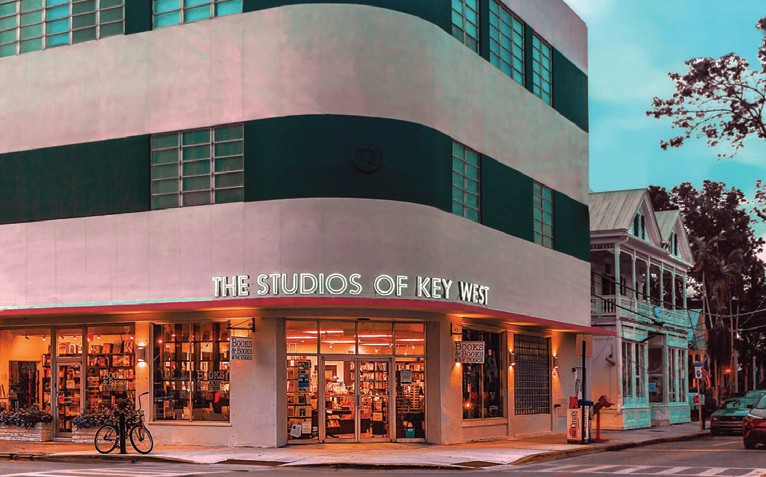 Imagine, if you will, this all-too-familiar scenario: you’re on vacation having the time of your life, accumulating dozens of tchotchke shot glasses to add to your impressive collection and it’s not until you get to the airport and scope out the insanely depressing last-minute knick-knack shop that you realize — dang-it! — you completely forgot to pick up something to remember your trip to Key West by. We’ve all been there — and we all know that an airbrushed T-shirt or a seashell Christmas ornament just isn’t going to cut it when you’re staring out your 35th floor office window at the gray mist hovering above Lake Michigan and wondering why you ever left Paradise in the first place.

And though Key West is typically associated with Spring Break T-shirts and wind chimes made of salvaged seashells, we have a lot more to offer in the artistic realm than the average suitcase-friendly tchotchke. Out past the “Everything $5!” shops hawking shot glasses and the frozen daiquiri stands, there lies a vibrant and impactful art scene overflowing with world-class talent and programming. And at the center of it all sits a pink and white striped building, once home to the Scottish Masons and now the epicenter of all things art-related on the island: The Studios of Key West. 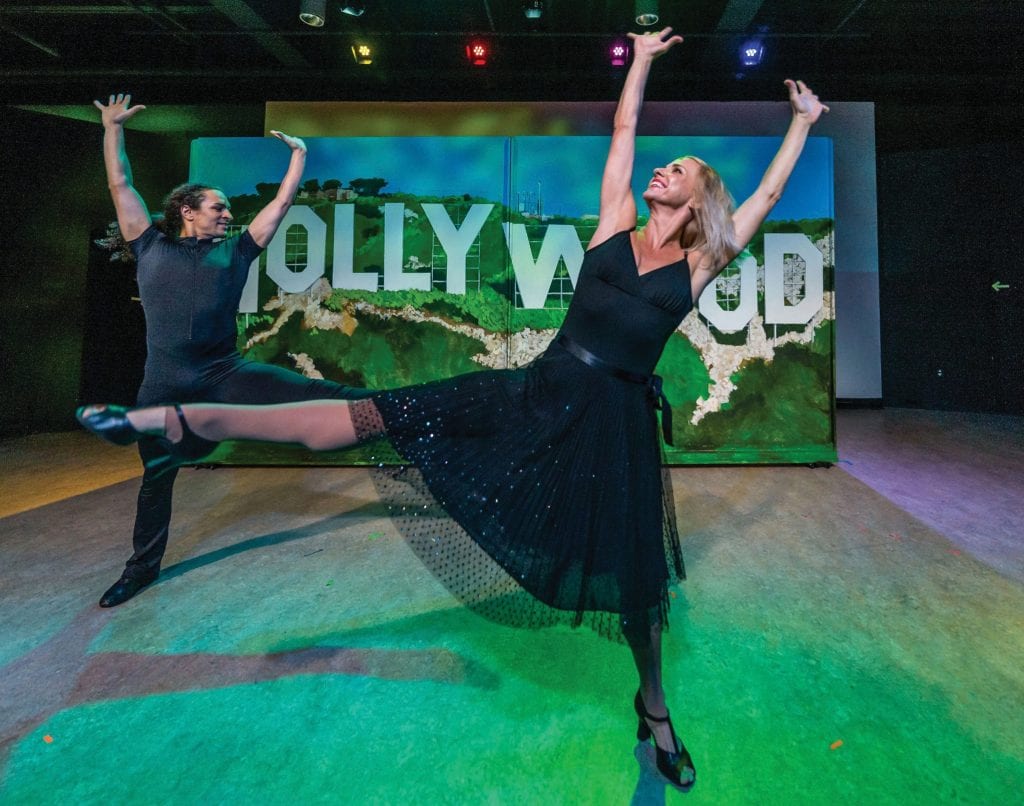 A scene from “Prime Time,” a locally written musical that premiered at The Studios this spring. COURTESY PHOTO

Over ten years ago, The Studios of Key West (known simply as The Studios to those in the know) was born out of a simple but vital necessity: to preserve affordable artist housing so that creative brains of all mediums could continue to make art on an ever-increasingly expensive island. (A worthy cause, no doubt, which has only increased in its importance over the years — a 2019 report listed that Key West had officially surpassed Miami as the third most expensive city vis-à-vis cost of living in Florida.)

For Peyton Evans, former journalist and Key West artist, there was no reason that Key West couldn’t house an iconic artists’ retreat, on par with Fordypningsrommet in Norway (try to say that one three times fast) or the Millay Colony. Between 2001 and 2006, Alexander and a small group of like-minded local patrons, professionals, artists and civic leaders formulated a plan for a series of studios in Key West that would remain free and open to those dedicated to expanding the island’s art collective. These Key West studios would bring together artists from near and far, inspiring the creation of new work and conversations about art’s power in a community. 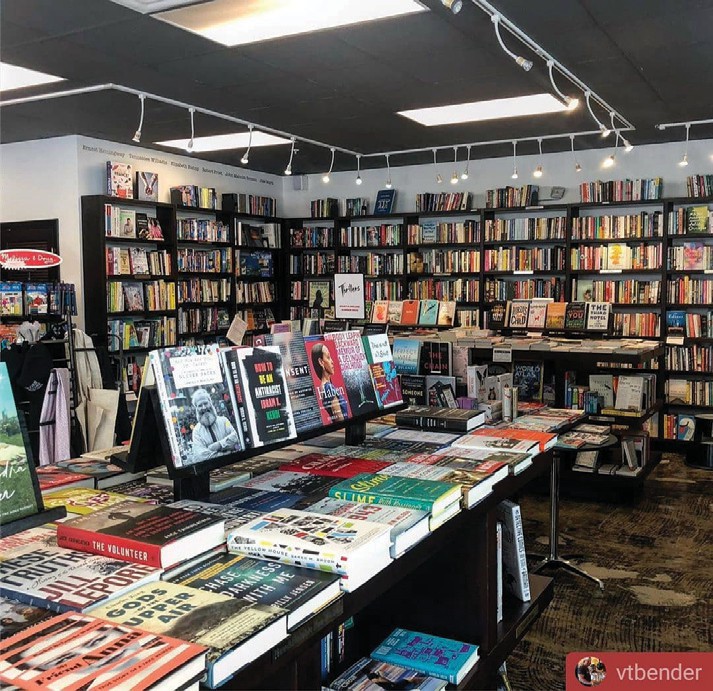 Books & Books resides on the bottom floor of The Studios of Key West. COURTESY PHOTO

What began as a small donor-supported set of artist studios quickly evolved into something much larger. Thanks to generous donations by like-minded patrons, a series of charming bungalows on quiet, residential streets were transformed into a hugely coveted artistin residency program. Today, creative minds from a mind-bogglingly long list of creative arenas flock to The Studios’ residences for one-month stays, where they can tap into the restorative spirit of the island and focus on their work. 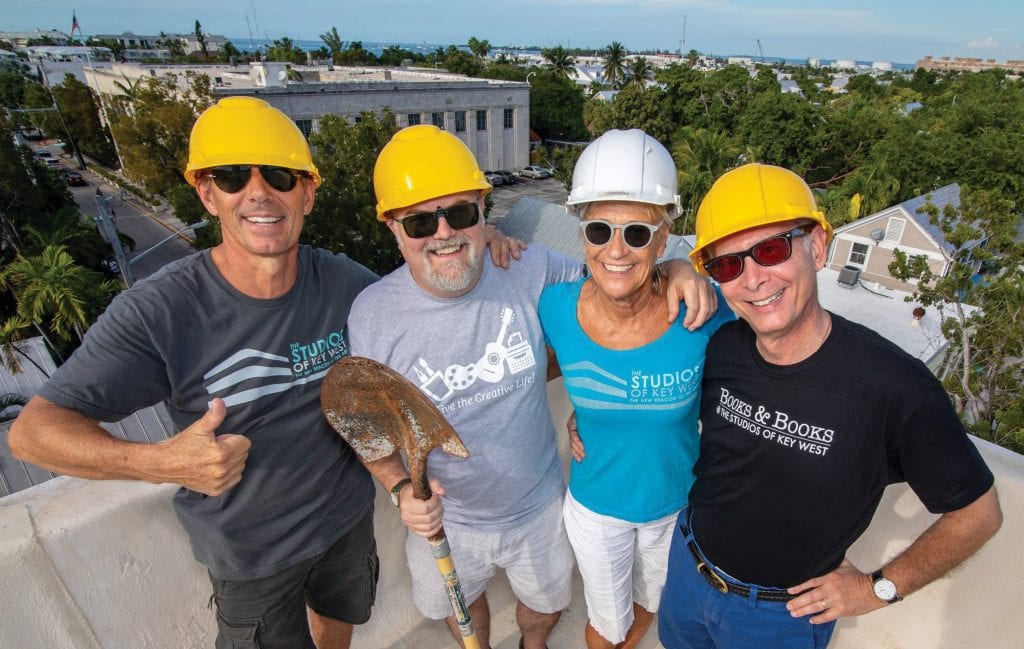 With monthly potluck dinners open to the public, visitors are invited to meet current artists in residence and tour their respective studios, offering the opportunity for intimate dialogue between the artists and their public. Thanks to its alluring location, The Studios’ Key West residency now receives hundreds of applicants a year, with those accepted covering a wide range of mediums — past residents have included writer Helsinki-based photographer Curt Richter, NYC street artist MOMO, parade-coordinator Katrina Brees and hundreds more.

The list of performances, lectures, symposiums, concerts, curated exhibitions and community outreach programs completed by the Studios since its official designation as a 501(c)(3) nonprofit in 2004 is too long to list in any publication, and the company shows no signs of slowing down. After years spent in a building too small to contain the explosion of art being created inside its walls, in 2015 they moved into their new home, a 14,000-square-foot monolith located steps away from Duval Street at 533 Eaton St.

The building features a 200-seat theater, multiple gallery spaces, classrooms for art classes, artists’ studios, a book store and — thanks to their monumental fundraising efforts over the past few years —the only free rooftop terrace in Key West, where the organization plans to host concerts, free art exhibitions and more. Hugh’s View, as it has been named, is currently under construction but, upon completion, will offer a 360-degree view of the island below.

Having more space to stretch out has resulted in a dramatic increase in programming. In 2017, The Studios expanded its already extensive offering of concerts, residencies and exhibitions to include groundbreaking events like opera, a naughty adults-only after-hours story hour, collaborative outdoor performance art and a diverse series of board member-sponsored private “Arts & Eats” parties, offering up an exclusive peek into the homes and studios of some of Key West’s most renowned creatives and patrons.

The organization continues to balance the pressure to utilize the local arts scene of Key West, employing Key West resident artists to teach almost half its classes, while also making sure that fresh outsider voices are given a platform from which to share their knowledge by having out-of-town visiting artists teach workshops or participate in artist talks during their residencies. This past spring, in fact, The Studios acquired the historic guesthouse adjacent to the main facility on Eaton Street, which has provided a new home for the Artists in Residence program as of June of this year.

Recognized for its efforts in bringing high-caliber art to the community, The Studios has been credited as the creative heart of Key West by publications such as The New York Times, Lonely Planet and CNN International. Recent performances have included groundbreaking and nontraditional theater and dance acts, including a comedic opera troupe, an exhibition of Nepalese Quilts with proceeds to benefit a children’s charity, a provocative installation by the three-man Cuban art collective “Stainless,” a circus camp for local children, and a one-woman performance by long distance swimmer Diana Nyad, who came ashore at Key West’s Smathers Beach after successfully completing her record-breaking swim from Cuba to Florida.

For a community whose official motto, “One Human Family,” is often mentioned alongside its unofficial one, “Key West: Where the Weird Go Pro,” it’s a matter of principle for Director Jed Dodds that his organization live both mottos as a kind of mission statement, never making anyone feel unwelcome or inexperienced.

“At the Studios, we try to blur the lines between who’s an artist, and who’s the audience. Who cares? We’d rather see someone picking up a paint brush themselves, or writing their first short story,” says Dodds. “And whether it’s from on stage, or in their studios, we try to create opportunities for people to meet and talk to the artists themselves, to see how they do it.”

It is Dodds’ firm belief that one shouldn’t need a prior knowledge of art in order for it to have a transformative effect on their life; as a result, the programming at The Studios is constantly scrutinized to ensure that it is simultaneously challenging and approachable, with the goal of persistently identifying new audiences and tailoring a season’s worth of events to be as inclusive as possible.

“Our goal is not just to hang art on the walls to be looked at,” says Dodds. “We use art to start conversations, spark new ideas and build a sense of community. People are hungry for that, especially here in Key West, so it’s become a fantastic scene. You never know what you’ll see or hear, or who you’ll meet, but it’s likely to make for an experience you won’t forget.”

It wasn’t long after the Studios moved into its new home at 533 Eaton St. that resident members began to notice something that, decades ago, would have sounded less plausible than Duval Street banning beer: tourists were returning to Key West specifically for cultural reasons, and not just to take in a week of sun, sand and sinful fun. They were arriving from all manner of places, and choosing to spend their vacations taking plein air painting classes in Old Town and their nights attending concerts, avant-garde theater performances and gallery openings. It seemed that Key West’s audience was evolving, and the Studios was well positioned to receive that audience into its new home; whatever the temperament or skill level, interested parties could flip through the 80-page catalogue of going-ons and find something to do that didn’t involve a pub crawl.

This Thursday, Oct. 3 from 6-8 p.m., as part of the Studios’ ongoing First Thursdays series, the Studios will present the opening of two new exhibitions: “Master Slacker,” a collaboration between Jack McDonald and Wonderdog Productions, presented in the Sanger Gallery, and “Insects & Angels,” by Flower Conroy, presented in the Zabar Project Gallery.

McDonald uses spray paint, stencil stylings and acrylic brush work to create off-the-wall immersive paintings. With graffiti-inspired concepts, the imagery consists of colorful backgrounds, humorous characters and strange overlaying text. McDonald has been creating work nonstop for the last 12 years — not only his own work, but also floats, theatrical sets, party props and backdrops. “Master Slacker” is a culmination of that flurry of creative hard work. The Wonderdog crew, helmed by madman Marky Pierson, joins in the fun, utilizing the open space in the gallery as a Fantasy Fest workshop, where glitter, tulle feathers, glue and all manner of festive ephemera are transformed into costumes and props.

Each of the gallery’s three floors are utilized nearly year-round for exhibits, making the Studios Key West’s best example of a contemporary arts museum. Stop in on your next visit to Key West — who knows? You just may find a thought-provoking piece to take home that will transport you from downtown Chicago to Ft. Zach in a Key West minute.

The Studios of Key West is located at 533 Eaton St. The galleries are free and open to the public from 10 a.m. to 4 p.m. Tuesday through Saturday. Membership offers discounts for tickets, classes, performances and events. For more information, call 305-296-0458 or visit www.tskw.org. ¦