The seductive economy: sex, mettle and labor in the art of Donna Nadeau 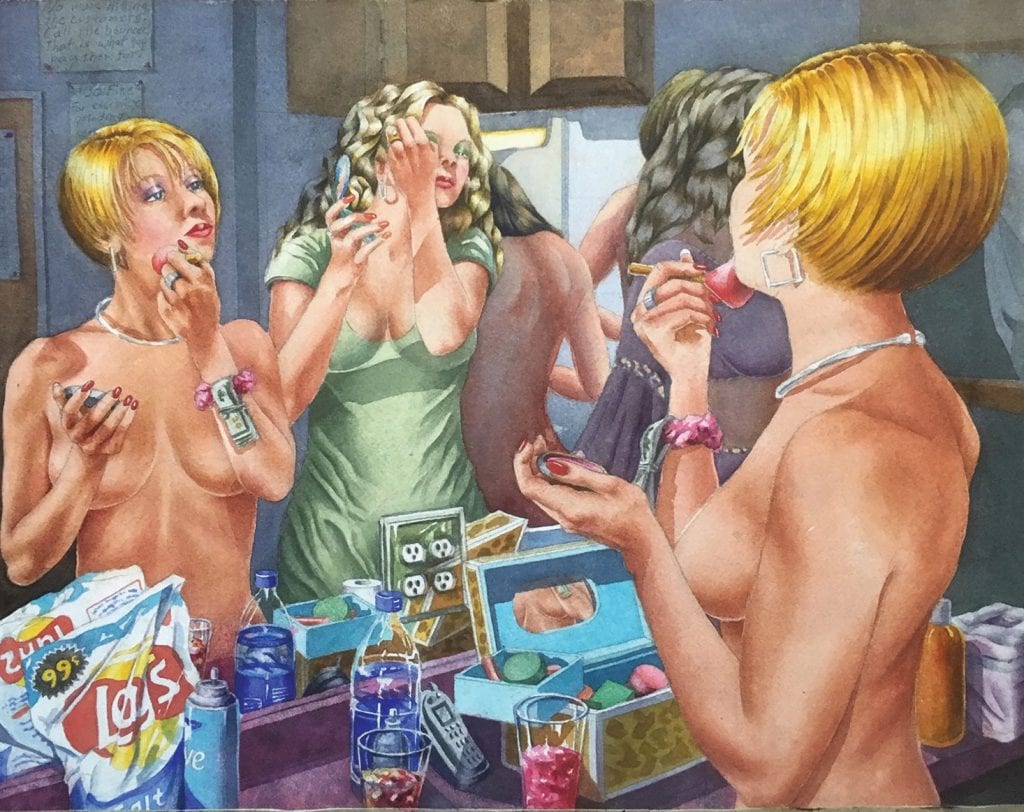 Occasionally, a life lived under the most brutal of circumstances forms the crucible for an artist to make work that realizes art’s fullest potential as a reflection on humanity. Responding to a volatile balance of experiences on the periphery of society — beyond the majority’s empiric knowledge — can result in work of such honesty and connectivity that it transcends the specifics of its production and alters the trajectory of our cultural standards and judgements. Donna Nadeau’s paintings are of that uncommon, and imperative, caliber.

Nadeau was born in 1955, in Kennebunkport, Maine, and raised there by her Lebanese father and American mother. From an early age, Nadeau was subjected to discrimination — in majority-white New England — due to her darker skin, which fomented a sense of difference, and a decline in self-esteem that would hamper her confidence later in life. Nadeau’s early proclivity for art was supported by her parents, but economic straits and institutional disregard made it a prohibitive option. 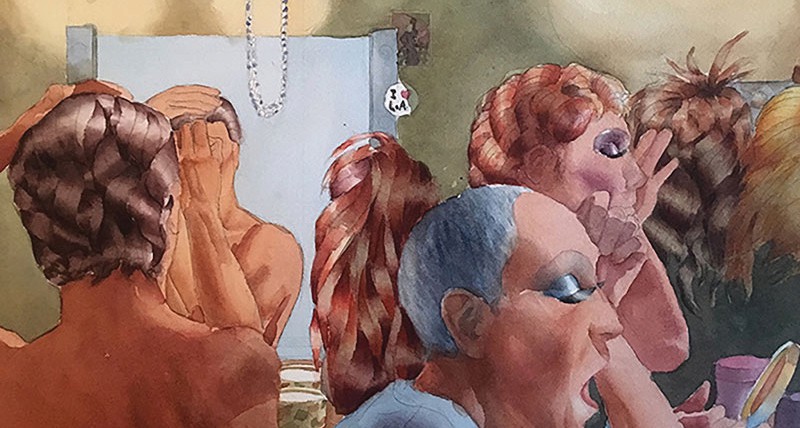 After high school, while married with a young son and modeling for art classes to earn money, she met Dewitt Hardy, a prominent Maine watercolorist for whom she posed in exchange for the drawing lessons she still longed for. He would remain her mentor and friend until his death in 2017. But it was in 1980, while on an extended trip to the Florida Keys, and in need of funds to take her family back to Maine, that she took a job which would become the catalyst for an extraordinary journey into the underworld of strip bars, gentleman’s clubs and the dangerous subculture that roiled around them.

What had been intended as a one-weekend earner — dancing topless at Bogart’s Speak Easy in Marathon — became a decades-long odyssey in which Nadeau found herself subject to the lures and consequences of her new environment. These included an abundant and easy income in the form of hundred-dollar tips, much of it funneled through the clubs from drug running, and lavished on dancers. She had to grapple with the expectations and appetites of the men who paid to be close to her, and who were frequently unrestrained in their behavior and requests. 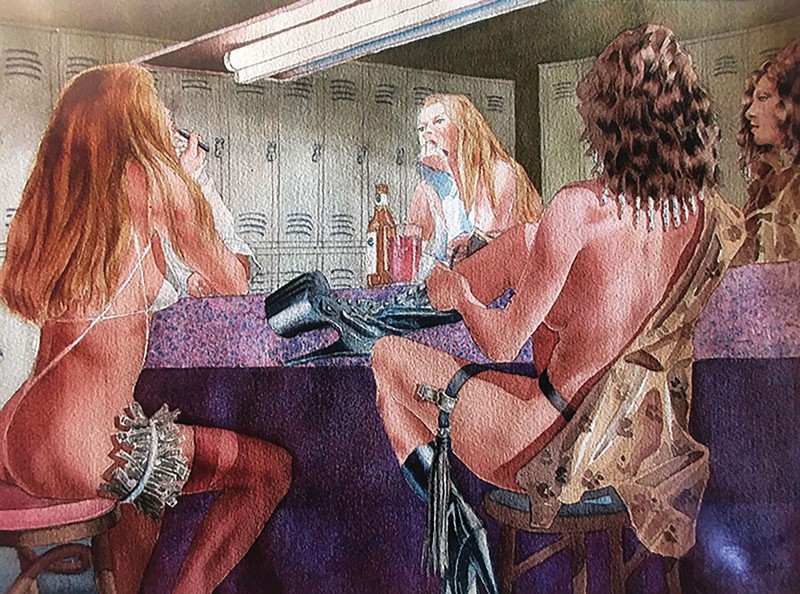 Donna Nadeau’s “Dollars & Dancers: Behind The Velvet Curtain” exhibition is open in the XOJ Gallery at The Studios of Key West through Jan. 30. COURTESY PHOTOS

Nadeau embarked on nomadic quests for better clubs and higher pay that took her from coast to coast, dancing in Las Vegas and California and across Florida. In the top venues, management terms treated her like a commodity. For example, The Cheetah, in Atlanta (a large club that employed dozens of girls a night) required weigh-ins and checks that nails and tan lines were correctly applied. And perhaps most grievous was a betrayal by those she considered friends that led to her ensnarement in a DEA sting operation.

During her journey, she found the most lucrative places to work in were nude, table dancing establishments that selected only the prettiest girls and upheld strict rules — customers had to stay two feet away, and performers’ knees couldn’t be more than four inches apart — while lower-end topless bars allowed physical contact and lap dances and had private rooms.

Working in the latter exposed the women to less respectful interactions, which were increasingly difficult to bear. Drugs and alcohol lent the numbing ability to get through each shift, to make men believe that Nadeau enjoyed their company, while they forgot their wives, and she earned their cash. In turn, substance addiction took a toll on her health and precedence over her son, his schooling and his well-being, while impaired decisions over boyfriends and partners led to physical abuse, shootings, self-protective hiding out and eventually an intervention that saved her life.

And yet, among these challenges, there were aspects of Nadeau’s world that sustained and enhanced her. The camaraderie between the girls who were her colleagues was almost familial. They would share days off together on sea cruises — sometimes expensed to kinder clients — or at beach picnics with their children. There was a thread of humor that helped lubricate the hardships, and occasional instances of Hollywood glamor. In 1994, Nadeau and other dancers from across America were flown to New Orleans and driven in limousines to the opening of Crescent Cabaret. There, the “house mother” drilled her charges that, “it’s your money, it’s just in their pockets.”

They learned the nuances of their profession and became shrewd prospectors of the male psyche; they understood the power of financial autonomy, and how to achieve it, so that contrary to perception, it was common for men to be the victims of feminine intellectual superiority. And while Nadeau competed for the best tables to dance on, or the wealthiest punters, the groups were unified in protecting their turfs. If a prostitute joined the troupe, “we’d run those girls off.” Strippers didn’t want their business undercut by direct offers of sex — something that customers thought they might receive from strippers later in the evening.

These women inherited society’s shame and scorn, otherizing and diminishing them, and perpetuating a secretive existence. But contrastingly, they were also powerful frontline warriors in the struggle for female empowerment, taking hits — literal and figurative — and suffering and resisting depredations long before the current shift in gender discourse. They represented a courageous Amazonian vanguard of sacrifice and strength, dressed in the stage costumery that was the armor of their kin. Their unabashed confidence in the beauty of their bodies, which are still the battlefields of so much conflict, ought to be acknowledged. Theirs is an unsung chapter in the dismantling of female denigration that is only now coming to fruition through the “Time’s Up” and “Me Too” movements.

Through all of this, Nadeau never lost sight of her artistic compulsion. During those many years, she photographed her co-dancers in quiet moments backstage, and with customers in the full glare of showtime. Her intention was to document a fascinating world — its colorful habitués, baroque power structures and sometimes harrowing psychologies — from the unheard perspectives of the women around whom the entire cavalcade still revolves. In 2003, towards the end of her dancing career, Nadeau began exploring these themes in watercolor vignettes, borrowing subtleties of form and palette she’d learned in Maine, and endowing them with the atmospherics of her experiences, the physical and social architectures, and the financial thrum that keeps the industry in tension.

Despite the dazzling, jeweled tones in many of the paintings, there are elements that contrast with the glittering facades and dynamic stage lighting: perfunctory dressing-room countertops, lockers, drab walls and darkened corners. Nadeau utilizes these recurring motifs not only as a pictorial device to build her compositions, but to mirror the poignancy and contradictions that she has learned through adversity. The paintings, and the stories that inspired them, are pointedly relevant to the cultural schisms of today’s sexual politics, although, subject to aesthetic disdain and systemic prejudice, they have remained unseen in the decades since Nadeau began making them — until now.

Nadeau’s highly anticipated “Dollars and Dancers: Behind the Velvet Curtain” opened in the XOJ Gallery at The Studios of Key West (533 Eaton St.) last week and will remain on view through Jan. 30. The Studios of Key West are open Tuesday through Saturday, from 10 a.m. until 4 p.m. More information can be found at www.tskw.org. ¦