The Magnificent 14, Works Progress Administration Artists, 1934-1936, Opening Reception tonight at the Gallery on Greene, 5 to 8 p.m.

“The 1930s was a heady time for artists in America. Through President Franklin Roosevelt’s  New Deal programs, the federal government paid them to paint and sculpt and urged them to look to the nation’s land and people for subjects. For the next decade—until World War II brought support to a halt—the country’s artists captured the beauty of the landscape, the industry of America’s working people, and a sense of community shared in towns large and small despite the Great Depression.” The Smithsonian.

These artist were later celebrated with exhibits at the Smithsonian, Metropolitan Museum, MOMA, the Art Institute of Chicago and were be purchased by the Fords, Melons & Rockefellers. They represent some of Americas most gifted artists 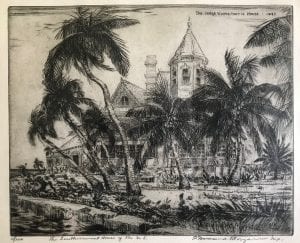 This exhibit shines a spotlight on some of America’s brightest artists who influenced local artists like Mario Sanchez, Suzie DePoo, Papito Suarez, and Martha Sauer.

The Gallery on Greene