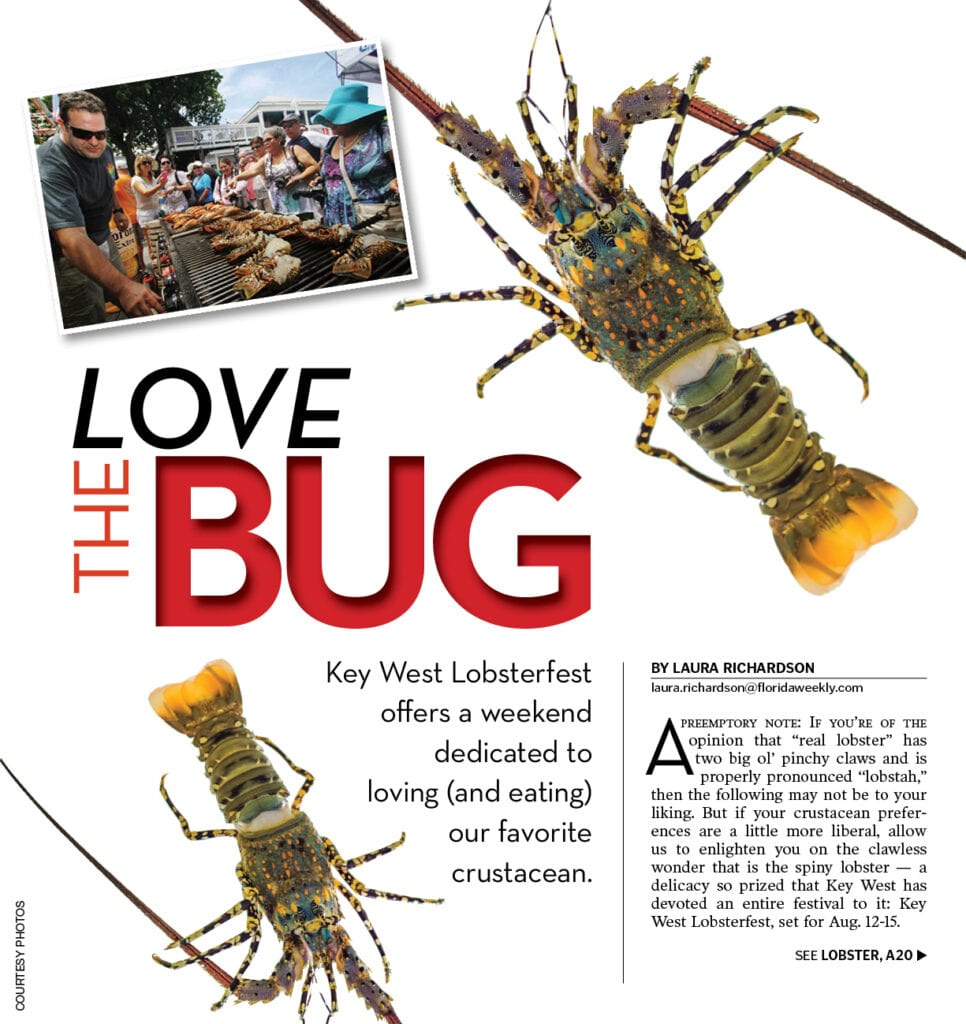 A PREEMPTORY NOTE: IF YOU’RE OF THE opinion that “real lobster” has two big ol’ pinchy claws and is properly pronounced “lobstah,” then the following may not be to your liking. But if your crustacean preferences are a little more liberal, allow us to enlighten you on the clawless wonder that is the spiny lobster — a delicacy so prized that Key West has devoted an entire festival to it: Key West Lobsterfest, set for Aug. 12-15.

After skipping a year, courtesy of COVID-19, Key West Lobsterfest will mark its 24th year.

It celebrates the Florida spiny lobster, a creature that looks nothing like the crimson Maine variety.

Unlike its Northern counterpart, the American lobster (Homarus americanus), which is best known for its giant, succulent claws, the Caribbean spiny lobster (Panuliris argus) is clawless, smaller, and harder of shell. Devotees of both species will argue themselves blue in the face as to which is better, but regardless of the provenance of the bug, there remain about a zillion ways to prepare them for human consumption.

Lobsterfest will fill the 100-500 blocks of Duval Street with vendor stalls. COURTESY PHOTO

Purists avow that anything more than a bit of melted butter and, if one is absolutely determined to add additional flavor, the tiniest hint of lemon or Key lime juice (just a fine misting — more like a sneeze than a squeeze) may be applied just before chowing down. But traveling around town in Key West, it’s clear our chefs are far less obdurate in their respective beliefs (to the benefit of hungry bellies across the island).

Incredibly, these spiny, detritus-eating sea bugs are responsible for millions of dollars in revenue and hundreds of jobs here in Monroe County. During mini-season, which always takes place on the last Wednesday and Thursday in July, hotel occupancy rates skyrocket and charter boats book up months in advance; the Monroe County Sheriff’s Department even employs lobster-sniffing dogs for the occasion.

The festival is the product of a friendly rivalry between a handful of local restaurants to prove which establishment had earned the right to call its Lobster Chilau the best in town. This intimate contest amongst friends blossomed into what is now Key West’s most popular summer festival, with an estimated yearly attendance hovering around 20,000 voracious lobster lovers.

Chilau, for those unfamiliar with the dish, is a boldly spiced, deeply Floridian type of seafood stew, the origins of which can be traced back to the late 1800s, when a mix of Italians, Cubans, and Spaniards emigrated to Tampa in search of work in one of the region’s many factories. Tampa Bay, with its abundance of cheap and tasty blue crabs, became a melting pot of cuisine, with each ethnic group’s distinctive recipes becoming fabulously muddled together. Legend has it that it was the love child of the Italians’ beloved spaghetti, the Spaniards’ distinctive spices, and the Cubans’ Enchilado Cangrejo (a type of crayfish stew) that birthed “Crab Enchilado,” shortened to Crab Chilau for brevity’s sake.

Further south, blue crab was eventually subbed out for the Caribbean lobster, and thus the Lobster Chilau of South Florida was born.

More than two decades after its inception in the small courtyard of Durty Harry’s bar on Duval Street, Key West Lobsterfest is now much more than a neighborhood contest over lobster stew; it has become a bona fide smash hit for South Florida, with four days of events ranging from boat trips and bar crawls to a street fair that closes down lower Duval. Instead of serving as a venue for restaurants to establish chilau supremacy, it has become a celebration of all things lobster-related, and with good reason: the lobster is a huge earner for the Keys, where just the draw of mini-season, the alarmingly popular 48-hour window for lobstering that non-commercial “bug lovers” are given at the end of each July, can draw tens of thousands of visitors to the islands.

It begins 5-9 p.m. Aug. 12 with a lobster boil at the Historic Seaport (location to be determined, as of press time).

That Saturday, Aug. 14, stroll the 100 to 500 blocks of Duval Street in a pedestrian-only zone, where vendor stalls featuring arts, crafts, and, of course, lobster cooked countless ways will line the street from noon to 11 p.m.

The street fair officially starts at noon, but make sure you’re at least there by 1 p.m. to catch a series of free concerts Cool Breeze and The DurtBags.