The importance of being Ernest 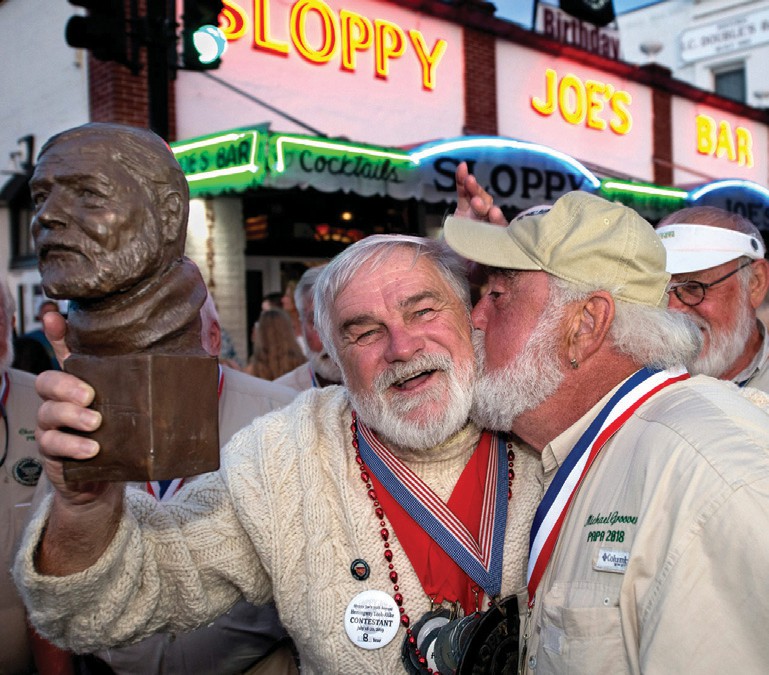 On this side of 2020 (which we might as well rename “The Year That Wasn’t”), now that many of us are vaccinated and walking around maskless feeling as naughty as streakers running across a football field, it’s only natural to feel a little reflective about how we finally got to this point.

Lately, I’ve been thinking most about the second quarter of the pandemic. The novelty of the work-from-home situation had worn off, my fiancé and I had burned through every show on our Netflix watchlist and the reality of the extended shutdown was starting to set in.

Even after U.S. 1 was closed to incoming traffic and the flow of visitors to the Florida Keys was cut down to nil, the pandemic still didn’t really feel real. (Aside from the fact that many of us abruptly went from steady to no income — that definitely felt real.) But once U.S. 1 reopened and the island started toddling back toward normalcy (or as close as we get to it down here), it was immediately apparent that, yes, things were going to be a little bit different for a little while. And one of the earliest occurrences that really hit that concept home was the cancellation of July’s Hemingway Days, easily one of the most popular festivals Key West hosts each year and one of the signature events of the summer. 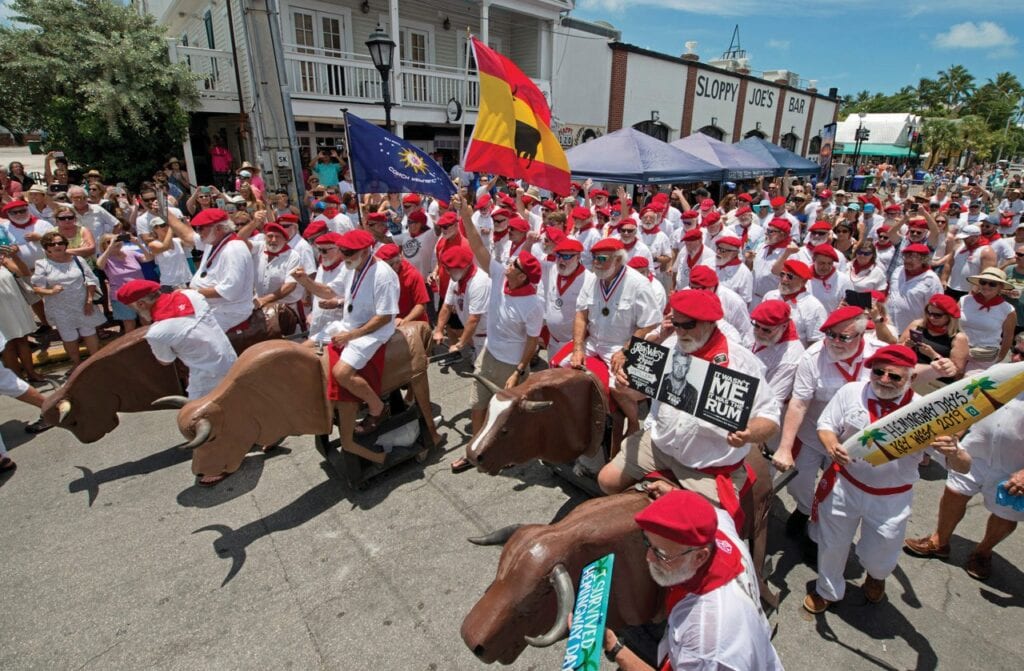 Hemingway look-alikes will run with the bulls as part of Hemingway Days. COURTESY PHOTO

Hemingway Days is a weeklong celebration of Ernest Hemingway, Key West’s most famous — and likely its most controversial — literary legacy. The festival, now in its landmark 40th year, runs July 20-25 and glorifies all things Ernest. Annual Hemingway Days events include lectures, cocktail parties, tours, races, readings, and even a marlin fishing tournament.

Teams in the Stock Island Marina Village Key West Marlin Tournament, held Thursday through Saturday, will target blue marlin, white marlin, and spearfish, all of Hemingway’s favorite game fish. If a love of the chase and the smell of the wide-open sea isn’t enough to inspire you to enter, consider there also is $50,000 in cash prizes to be handed out to winners.

Teams that accumulate the most points for marlin and spearfish during the tournament’s three fishing days will split $40,000 cash. Teams also can earn points by entering one “fun fish” (dolphin fish, tuna, wahoo or released sailfish) per boat per day to compete for an additional $10,000. Additional tournament events include a pig roast, fish fry, cocktail party, and various opportunities to brag to your co-competitors that you beat Hemingway’s record of 54 marlin caught in 115 days.

But it’s the Sloppy Joe’s Hemingway Look-Alike Contest, held at the Duval Street bar where Hemingway reportedly spent many happy hours, that receives the bulk of the annual festival’s national press, owing primarily to the overwhelming sight of a room packed with what appear to be Hemingway’s clones, all jostling to win a statue shaped like — you guessed it — Papa Hemingway himself.

This year’s competition kicks off at 5 p.m. Wednesday, July 21, with a meetand greet event at Sloppy Joe’s and then from Thursday, July 22, to Saturday, July 24, the contestants will become the living embodiment of Hemingway incarnate. And these Papa pretenders don’t mess around — the competition is fierce. Each year, over a hundred broad-chested, bearded hopefuls queue up in Hemingway’s favorite watering hole, Sloppy Joe’s, to compete for the title of “Papa.”

They preen, they pose. Typically, they arm-wrestle, but because of COVID, that portion of the contest has been scrapped this year. They spend hours choosing the right khaki safari shirt and woolen fisherman’s sweater. And, much like a traditional beauty pageant, looks only get the contestants so far — there’s a talent portion, too.

On Friday at 1 p.m., the putative Papas will participate in the “Papa” Hemingway Look-Alike Fish-Off, a dockside catch-and-release competition using “Cuban Yo-Yos” (which are essentially hand reels that look like massive children’s toys). And on Saturday at 1 p.m., each Hemingway (outfitted in a crisp outfit of white and red, complete with jaunty beret and handkerchief) will run among manmade bulls in a simulation of the famous and significantly more life-threatening event in Pamplona, Spain.

Lest ye think Hemingway Days is all style and no substance, there’s a wholesome scholarship component to the weekend, in which the Papas celebrate their namesake’s July 21 birthday by announcing the recipients of the Hemingway Look-Alike Society’s scholarships given to local students. It’s a fun, famously packed event, but it’s just one of many do-not-miss events scheduled for this year’s Hemingway Days lineup.

First off, attendees may want to refresh their memories of Hemingway’s oeuvre by visiting his old Key West digs, now called the Hemingway Home & Museum. Located at 907 Whitehead St., the museum — and its famously lush, six-toed cat-covered grounds — is perfect for a lazy afternoon spent meandering through rooms filled with antiques, memorabilia, and knowledgeable docents leading tours throughout. Hemingway wrote some of his most influential work in the studio adjoining the house, including “For Whom the Bell Tolls” and “The Snows of Kilimanjaro.”

The Hemingway Days schedule is bookended by museum days Tuesday and Sunday, July 20 and 25, at the Custom House Museum (281 Front St.). Literary and history aficionados can view memorabilia from the author’s life, as well as 59 drawings by marine artist Guy Harvey illustrating Hemingway’s “The Old Man and the Sea.” Pro Tip: Custom House Museum admission is free to those who mention Hemingway Days.

Literary events include the announcement and reading of the winning entry in the Lorian Hemingway Short Story Competition, paired with the Key West Poetry Guild’s reading of “Papa’s Poems” and guild members’ work at 6:30 p.m. Wednesday, July 21, at the Key West Library (700 Fleming St.). Awarding $2,500 annually to emerging writers of fiction, the competition is directed by Lorian Hemingway, Ernest Hemingway’s granddaughter and author of such books as “Walk on Water.”

At 4 p.m. Thursday, July 22, Dr. Ashley Oliphant, an acclaimed Hemingway scholar and author, will give a virtual presentation titled “Key West to Bimini: Hemingway’s Big-Game Fishing Evolution.” In her presentation, Dr. Oliphant, who wrote “Hemingway and Bimini: The Birth of Sport Fishing at ‘The End of the World’,” will discuss Hemingway’s dedication to saltwater angling in Key West and in the Gulf Stream waters.

Oliphant and artist Beth Yarbrough also will lead a twilight walking tour of Hemingway’s Key West at 6 p.m. Friday, July 23. In a truly Hemingway-esque move, the tour will end with a sunset happy hour on the veranda of the Custom House Museum. Both the presentation and walking tour are presented by the Key West Art & Historical Society.

Those traveling by car should plan to bypass Duval Street, Key West’s main drag, on Saturday, July 24, when the street will close to vehicular traffic for an all-day open-air Caribbean street fair featuring arts, crafts, tropical clothing, jewelry and a variety of food stands. Grab a bite to eat, don your Pamplona-inspired best and head over to Sloppy Joe’s at 1 p.m. to catch the aforementioned Running of the Bulls event. Just be sure to watch out for the horns on those man-driven “bulls” — and for the careening Papas, for that matter. After a couple rums each, the bulls and the Hemingways are equally unpredictable.

If you’re looking for something a little more active, the author’s sporty lifestyle might best be celebrated by participating in the Hemingway 5k Sunset Run/Walk and Paddleboard Race. The Paddleboard Race, beginning at 5 p.m. on Saturday, features a three-mile ocean course that begins and finishes at the Southernmost Beach (1405 Duval St.).

Or, if you’re faster on pavement than waves, skip the paddleboarding and enjoy running the longest-running road race in Key West, a 5k sunset walk/ run that takes participants on a tour of historic Old Town Key West, making sure to pass by the author’s home. An after-party back at the Southernmost Beach Cafè (1405 Duval St.) will feature food, drinks, a silent auction, raffles and an awards ceremony. If you’re feeling a little sore Sunday morning, indulge in some Recovery Yoga with Salute to the Sol Yoga at the Truman Waterfront. (Yoga is free to all who participate in the walk/run and the paddleboard race, but make sure to bring your bib or medal and your own mat!)

However you choose to spend your Hemingway Days weekend in Key West, we encourage you to at least adopt a little of Papa Hemingway’s life philosophy: work hard, play harder and drink like that glass of rum (or whiskey or scotch) is the last you’ll ever have. The full, chronological list of festival events for the Hemingway Days celebration can be found at www.fla-keys.com. ¦