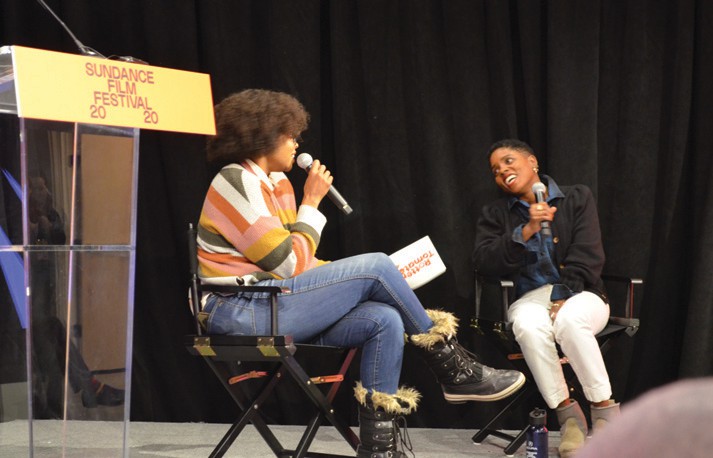 PARK CITY — “This is the blackest Sundance ever,” emcee and Rotten Tomatoes editor Jacqueline Coley excitedly announced into a mostly working microphone, kicking off 2020’s internationally renowned Sundance Film Festival on Jan. 23, which was followed by 10 days and 128 feature films in Utah’s Rocky Mountains.

Traditionally at Sundance, founder Robert Redford, director John Cooper and executive director Keri Putnam host a conversation and discussion with the audience on the first day. Not this year, although statements and pre-recorded video messages from the three were sent via email. Redford is 83.

Instead Ms. Coley conducted a panel with filmmaker Janice Bravo, writer and director of the film “Zola,” which premiered at the festival the next day. Both are African-Americans.

The statistics of inclusion at Sundance are startling, Ms. Coley suggested: Of the 65 directors in all four of Sundance’s competition categories, comprising 56 films, 46% were women, she explained. Even more remarkable for people traditionally exiled from silver screen storytelling in the United States, 38% were people of color, and 12% LGBTQ+. 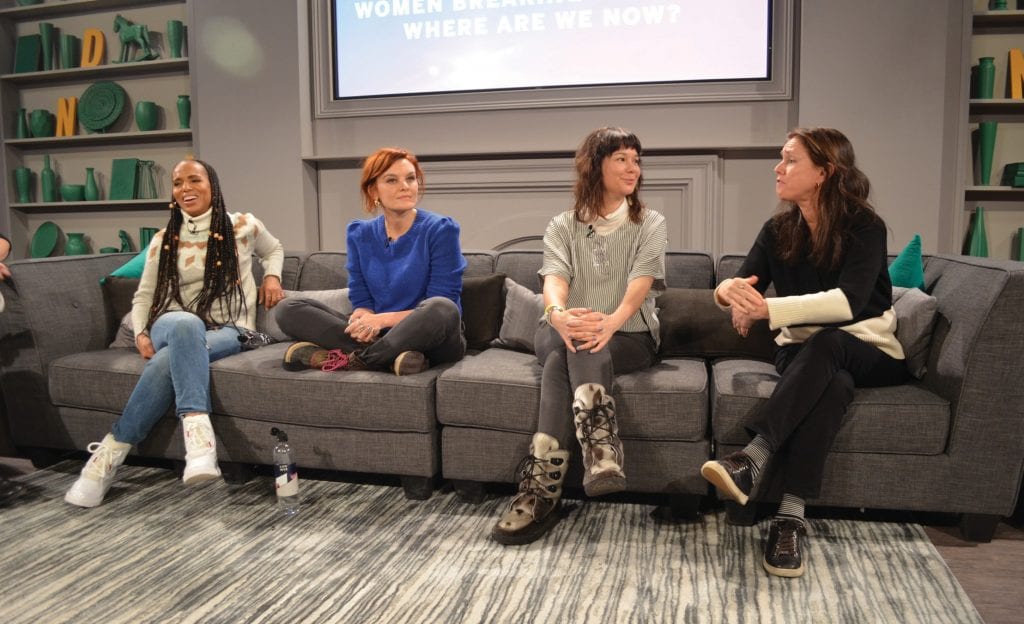 This had always been Redford’s goal and mission at Sundance: that independent film give voice to those denied it elsewhere.

Of the 28 prizes in total, almost half were directed by women, 40% by people of color; and 8% by LGBTQ+ artists, Ms. Coley noted.

Even among those covering the festival, including me, there was more inclusion than ever. Sundance’s Press Inclusion Initiative — its effort to cultivate a more representative press corps at the festival — provided 51 unrestricted cash stipends to critics, freelancers and journalists from underrepresented communities, including women, people of color and people with disabilities, the Sundance Institute reported. 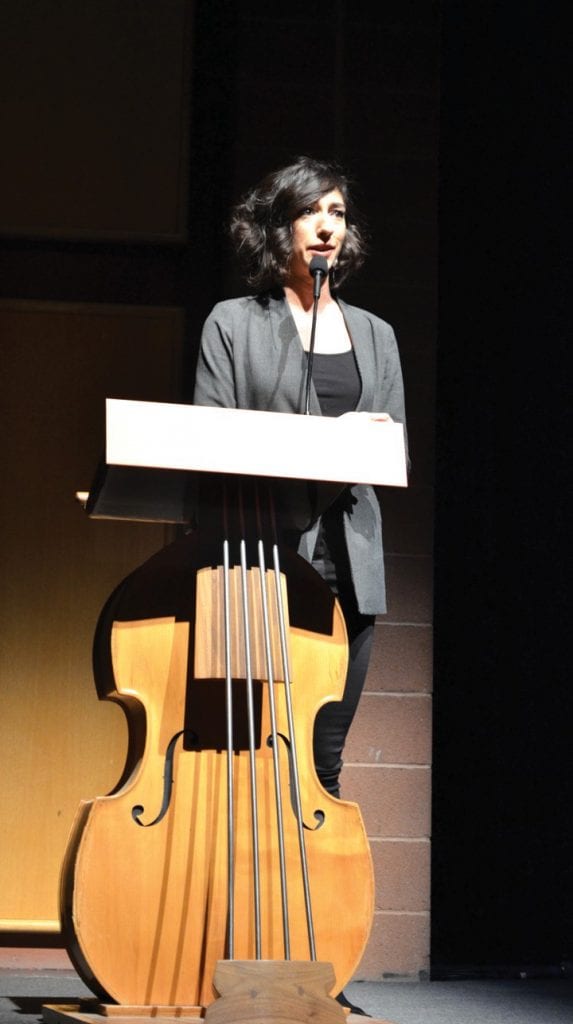 Lisa Wilson in a Q&A after her film “Miss Americana” screened at the Eccles Theater in Park City, Utah. ERIC RADDATZ / FLORIDA WEEKLY

For good reason, the institute said. A 2018 study from the University of Southern California showed that about two-thirds of critics reviewing the top 300 films in the previous two years were white males.

Thus, white males may have found themselves struggling harder to cover the festival this year, where “63% of the entire 2019 Sundance Film Festival press corps were individuals not defined as heterosexual, able-bodied, cisgender white men,” the institute reported.

While I didn’t receive a stipend, I did manage to see a few films and attended more than a few parties or panels where I could comfortably identify as a person of diversity.

Though Sundance has gone its own road in combatting traditional discrimination in cinema, critics say the Oscars are still too white, creating an ongoing debate. This year the Hollywood Foreign Press Association (which picks the Golden Globe nominations and winners) were called “very, very racist,” by host Ricky Gervais. 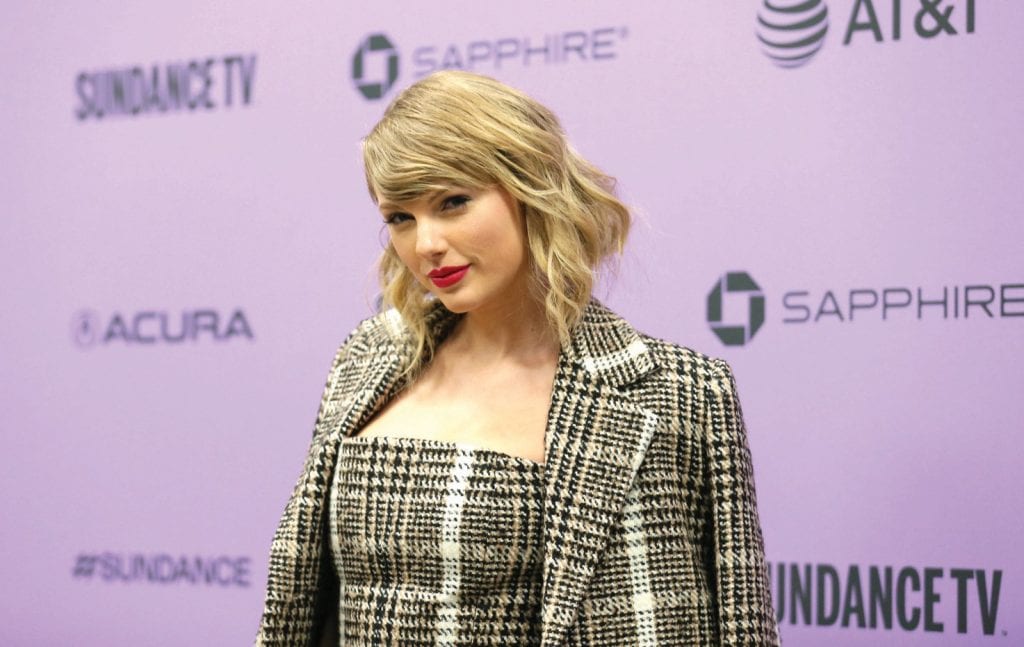 In fact, the subject of racism is heated and the realities of how that equates to roles, awards, recognition and awareness continues to fuel important and ongoing debates.

The topic of inclusion for inclusion’s sake, though, has also recently ramped up, this time from horror fiction author Stephen King. The famed writer (and nominating member for the Academy Awards) recently tweeted, “I would never consider diversity in matters of art. Only quality. It seems to me that to do otherwise would be wrong.”

The opinion was met with harsh public criticism. Is it fair to include or exclude based upon race and gender? Is that EVER OK? I will not try to answer that here. 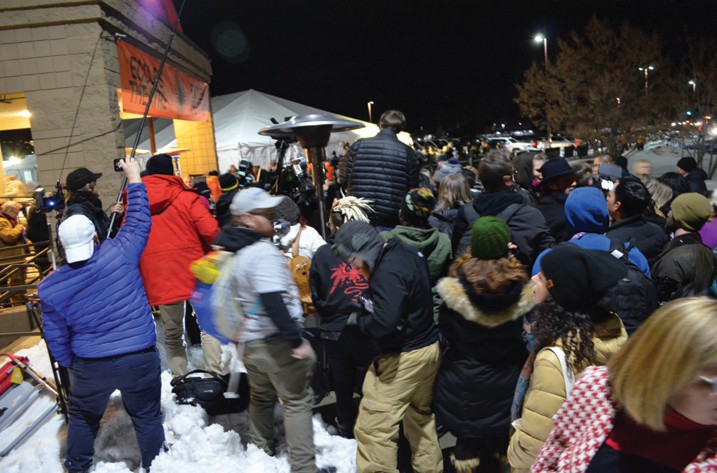 Crowds gather outside the Eccles Theater in Park City for the arrival of Taylor Swift for the screening of the world premiere of “Miss Americana.” ERIC RADDATZ / FLORIDA WEEKLY

Still, Kerry Washington, whose film “The Fight” premiered at Sundance this year, offered a hope for a time “when we don’t have to mention the statistics because we live in a space of equality and inclusion.”

She was addressing the “Women Breaking Barriers Year 3: Where Are We Now?” panel. “That is the goal to me,” she concluded.

It’s hard to believe any one person could outshine all of the others at a festival as large and as diverse as Sundance, a festival packed with the finest talent the industry has ever seen. But I think one person did.

With over 244 projects accepted as entries around the world this year — probably about 1% — entourages from each production grace Park City for two weeks, and include very recognizable and accomplished stars (even with the hats scarves and layers keeping them warm in the cold). Joining them (if history is any indication) are likely future Oscar winners, their names still unfamiliar. 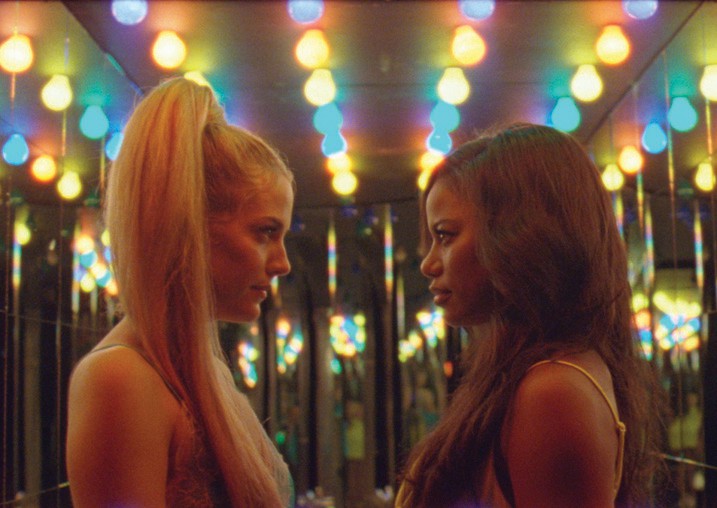 That’s impressive, perhaps. But the opening night shined the light on one name and one name only: Taylor Swift.

“Miss Americana” offers a behind the scenes look at one of the most iconic artists of her time, revealing her creative genius from her childhood through her young-adult fame, spotlighting her development as a songwriter and her subsequent transformation as a person, during the difficult and sometimes harsh periods in her life. 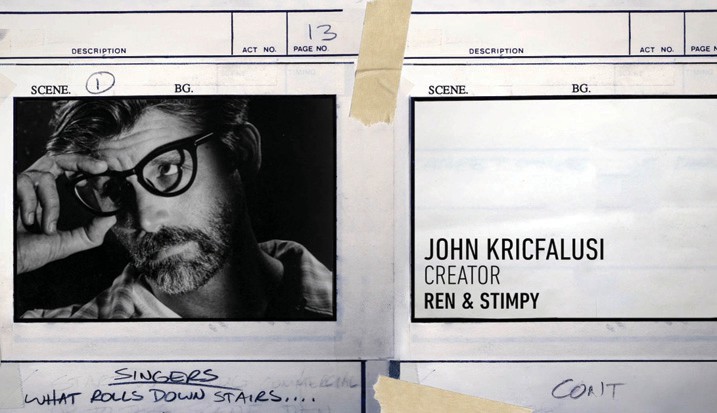 In one studio scene, she collaborates with singer Brendon Urie from Panic at the Disco to create the song, “Never find another like me.”

What should music look like? We’ve likely never seen such a powerhouse of creative music, songwriting and entertaining — a woman with a following roughly as muscular as the Beatles once had — pitch her suggestions into film on the spot, articulating a vision that leaves her sweating and breathless as it emerges. This is music and creative genius. Directed by Lana Wilson and produced by Academy Award winner Morgan Neville.

“Women Breaking Barriers Year 3: Where Are We Now?” panel

The conclusion about meeting those challenges: solidarity. Elisabeth Sereda, Sundance Institute Executive Director Keri Putnam and a panel including Kerry Washington, Frankie Shaw, Lisa Jackson and Julie Taymor all insisted the industry offers opportunities for women that can be lost if they aren’t clannish — insisting, together, on equal treatment. 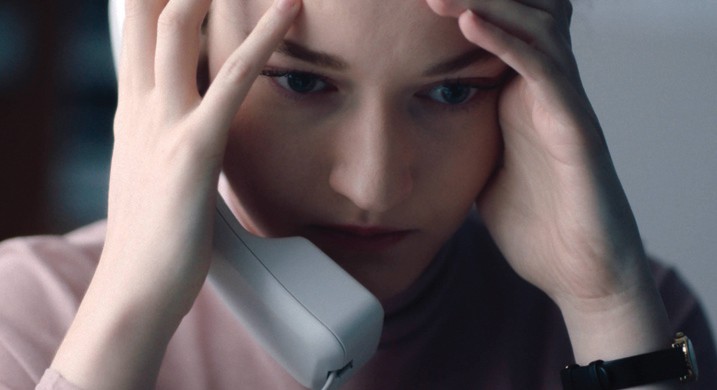 Strippers trip to strip and trap in Florida, becoming victims of trafficking and nearly insurmountable pain.

Based on the real live tweets of @zolarmoon in 2015 and written and directed by Janicza Bravo, the film set mostly in Florida stars Taylor Paige and Riley Keough. Somehow it manages to take a horrific real-life story and still get the audience to laugh at the lighter side, giving viewers a roller coaster ride most could never imagine.

John Kricfalusi, the controversial creator of Red & Stimpy, the animated show that ran on Nickelodeon, had a unique rise to the top of the cartoon world. A pioneering rock star at the pinnacle of his fame, his relationship with the network and admitted inappropriate underage relationships are borne out in an eye-opening documentary with never before access to footage and stories that inspire his character’s expressions and voices. Those voices include Kirk Douglas and Louis Feinberg — “Larry” from The Three Stooges. 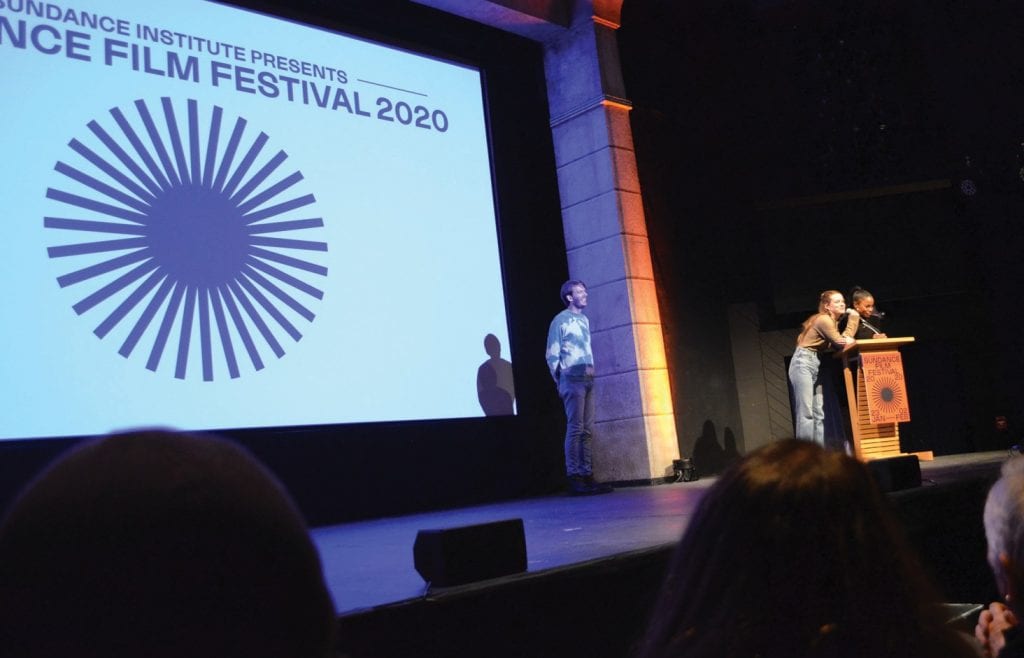 Julia Garner stars as an assistant to a Harvey Weinstein-type high-powered film executive. Directed by Kitty Green, the deliberately slow-moving film delivers a powerful lead performance, however creepy the feeling viewers might suffer through the entire screening.

Will Ferrell and Julia Louis-Dreyfus are a married couple thrown into disarray as they re-evaluate their lives and how they feel about each other during a ski vacation in the Alps. Set to come out in theaters on Valentine’s Day, and no relation to Robert Redford’s 1969 film, “Downhill Racer.” 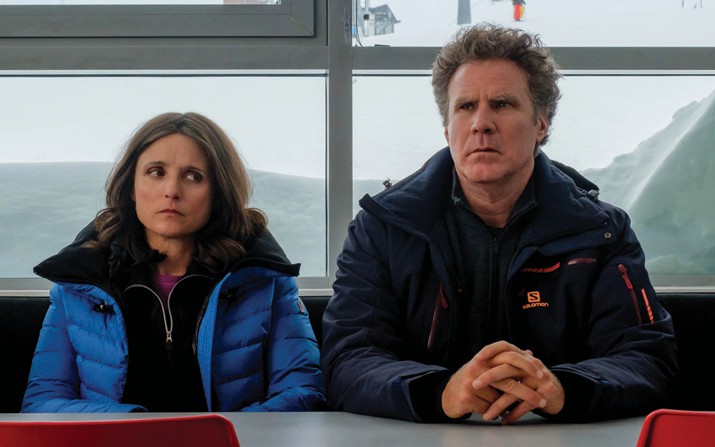 From Kim A. Snyder, who directed the Peabody Award-winning documentary “Newtown,” “Us Kids” focuses on the aftermath of Florida’s mass shooting at Marjory Stoneman Douglas High School that claimed 17 lives. Brave students speak out after the tragedy about the national gun-violence epidemic.

Remember that Monopoly game from the 1990s? The documentary focused on the work of Jacksonville (Florida) FBI agents investigating was the network of players who were busted for defrauding McDonald’s out of $24 million by manipulating the game. By first-time docuseries directors James Lee Hernandez and Brian Lazarte; you can stream the first episode on HBO now.

New to the festival

A new director was named for the festival. Tabitha Jackson was chosen to replace current director John Cooper, who has served in that role for the last 11 years. Cooper will stay on in a newly created emeritus director role. Jackson, who has served as the director of the Institute’s Documentary Film Program since 2013, will “oversee the festival’s overall vision and strategy,” says a Sundance press release. 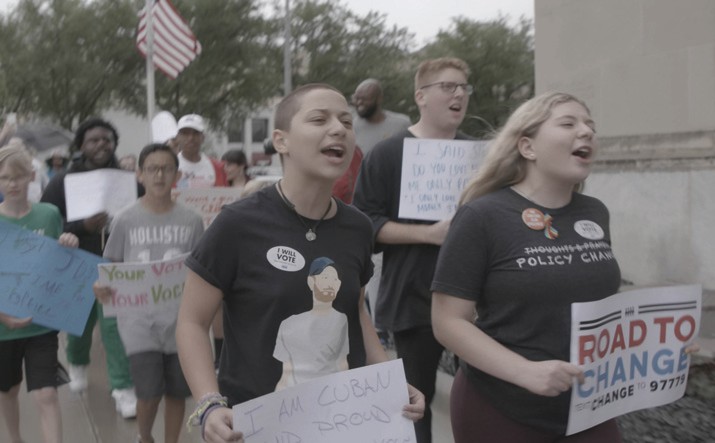 “I love that the theme this year is imagined futures,” Keri Putnam, executive director of the festival, offered in a prepared video release in lieu of a public press conference this year.

“There’s a revolution in distribution going on, but through it all we’ve supported artists, we’ve opened our doors for millions of new storytellers to come in and be creative,” said John Cooper, outgoing director.

“What struck me and my team about this year’s program, when we stepped back to consider it as a whole, is how distinctive each work is, and how their individual voices resonate and engage with each other,” said Kim Yutani, director of programming. ¦