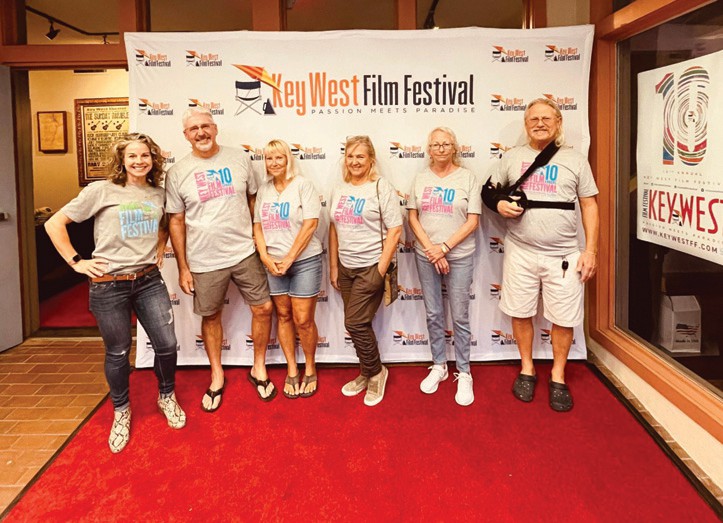 The red carpet meets the islands at the Key West Film Festival.

The Key West Film Festival returns for its annual celebration of some of this season’s best movies. The weeklong action takes attendees across venues, including the San Carlos Institute, Williams Hall and The Studios of Key West for heavy hitting titles such as “Glass Onion,” “The Inspector” and “Talking Women.”

The festival continues through Nov. 20.

Michael Tuckman, of mTuckman media, is the director of programming. We talked about this edition’s major screenings, a twist to the critics panel, and what he’s looking forward to watching the most.

Michael: 2021 was a wonderful year for film, so was 2020, so was every year. There are just so many incredible films made and released each year. You just have to know where to find them. That can be tough. And that’s one of the main reasons that KWFF exists, to present a curation of some of the best films of the year, each and every year, for cinephiles to be able to do a deep dive. I love going to Sundance and Toronto each year. Not for the parties or celebrities, but because I get a chance to immerse myself in film for five days and that’s exactly the kind of deep dive we want patrons of KWFF to feel. Except with the benefit of the worlds’ greatest climate instead of snowstorms! And 2022 has a ton of great films to provide that setting.

What’s opening and what’s closing the festival this year?

Michael: As with every KWFF, it’s not just what is opening and what is closing, but which nationally renowned critics will be presenting the opening and closing night films, giving audiences perspectives on the film that they wouldn’t be able to get at any other screening or festival. This year, Eric Hynes, chief curator of the Museum of the Moving Image in New York and freelancer for Film Comment and Reverse Shot; and Alissa Wilkinson, lead critic for Vox.com, will curate our opening and closing night films. We’ve got a fun one to kick things off with “Glass Onion: A Knives Out Mystery,” the next installment of the deliciously star-studded “Knives Out.” Everyone will be talking about our closing night film, “Women Talking,” produced by Frances McDormand with perhaps the greatest cast of women ever assembled in all of the lead roles. Alissa and Eric will present both films and lead a conversation prior to them to give audiences context and appreciation.

How do you sell a theatrical movie release and experience for titles that sometimes are available for streaming within days?

Michael: Maybe I’m old-fashioned, but if given the choice between seeing a film in a theater or online, I’ll take the theater. That’s not to say I won’t consume a lot of great films at home, but something like “The Inspection,” which we are showing as a spotlight title, that’s a film that derives its power from the tension and intensity it creates on screen. It’s based on the true story of a homeless young gay African-American from New York who enlists in the Marines and commits to making it through boot camp. Think about the first 45 minutes of “Full Metal Jacket” and now think about how much more immersive that experience was in the theater than watching it at home.

What are some of the special events you’ll be bringing back this year?

Michael: Our one-of-a-kind critics panel, now in its 8th year, returns. Only this year, it’s on a boat! We’re in Key West after all, why not have it on a boat? We are very excited for that and to be joined by critics from Film Comment, Vox.com, Rolling Stone, Variety, IndieWire and the Keys Citizen. Our sixth annual Golden Key for Excellence in Costume Design returns as well. We are the only festival in the country to annually recognize this art form.

Will there be any new introductions to the categories or venues on show this year?

Michael: I’m super excited about a new twist on a venue we’ve used in the past. We’ve made it a tradition over the last few years to show our Sunday night film outdoors at the Perry Hotel. We’re doing that again this year, but in a twist, instead of using their lawn, we’ll be screening in the pool area. Why the pool area? Because we have one of Florida’s favorite sons of filmmaking— Bill Corben — coming to town to present his new film, “God Forbid,” about the pool boy who had a threesome with Jerry Falwell Jr. and his wife and took down an institution. So, of course, it needs to be at the pool.

Last year, you featured this pretty original documentary “Alien on Stage” that follows a group of bus drivers who pay homage to the “Alien” franchise on stage. Does something like that solidify the quirky core of the festival or are its characteristics more fluid?

Michael: Oh, for sure. One thing to note about the fall film season is that there are some very intense films. They are wonderful, but you can’t have a lineup of just heavy-hitting films. Quirk is a big part of our festival, and there is a big difference between quirky and fluffy. Quirky films, like “Alien on Stage,” reveal very human stories with laughs to go along with them. Why can’t theater be something for everyone, not just the pros? I think one of the defining films of the festival this year is “Naked Gardens,” about the largest naturist community in the country. And not just because it takes place in Florida. Yes, there are some wildly entertaining moments and situations that are bound to come up at a large nudist colony, but at the end of the day, the film is about being comfortable in one’s own skin — quite literally — and letting others live the way they wish as well. And isn’t the motto of Key West that we are One Human Family? I really hope everyone can see the film. Clothing optional, of course. ¦

Interview has been edited and condensed — For tickets and schedules, go to KeyWestFF. com.