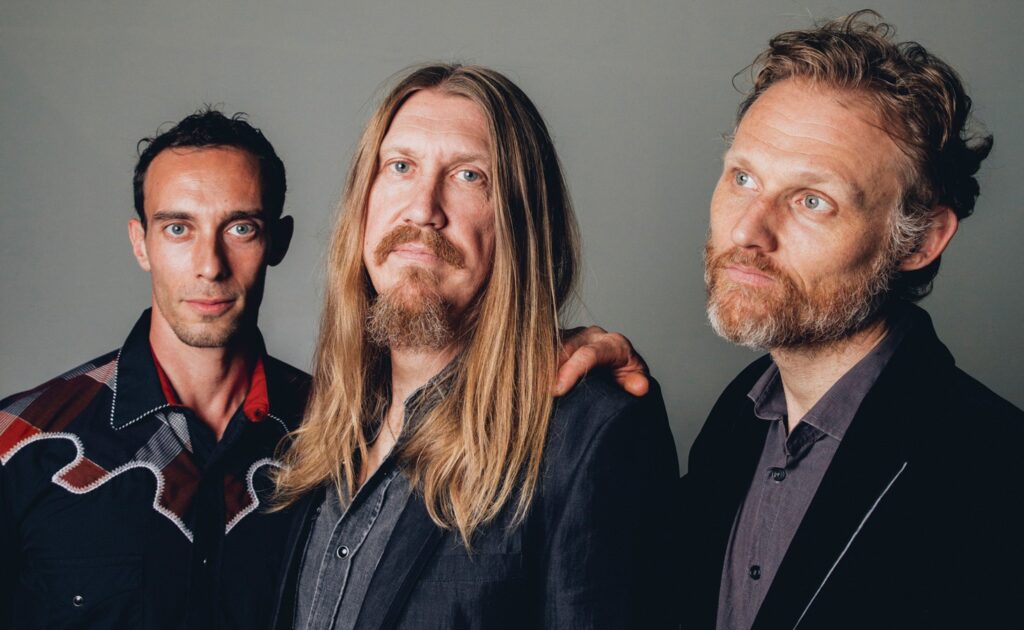 Jano Rix, Oliver Wood and Chris Wood of The Wood Brothers will perform at the Key West Theater on Dec. 4. PHOTO BY ALYSSE GAFKJEN

With their latest album, “Kingdom In My Mind,” the Wood Brothers continue to make music that is difficult to define, but easy to enjoy, melding together elements of folk, jazz, rock and blues into a sound that has grown quite distinctive and unique.

They will present that sound Dec. 4 at the Key West Theater.

To the group’s bassist, Chris Wood, this was the plan from the day he and his brother, Oliver, started the group.

“I had a good friend who once told me the hardening of the categories promotes art disease. It’s convenient in the industry to be marketable and be defined, but it can be confining as an artist,” Wood said in a phone interview. “So we’re always striking that balance. I mean, we want our music to be accessible. We’re not out to do things that are so out there and challenging. But for me what’s exciting is to create accessible music that is also not what you’d expect musically.

“That’s sort of been my fantasy about the Wood Brothers from the very beginning,” he elaborated. “I had this fantasy in my head of what if Charles Mingus and Robert Johnson had started a band together, what would that sound like?” 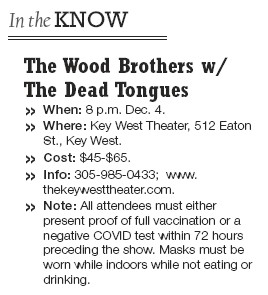 Mingus, of course, is one the greats of jazz, while Johnson was among the most influential pre-World War II bluesmen ever. And on “Kingdom In My Mind” — as on the Wood Brothers previous albums — those styles surface frequently. “Alabaster” is one such song, with its mix of jazz, blues and rock evoking a blend of anticipation and trepidation. The quirky and soulful “Little Blue,” is another track with a particularly jazzy blues accent.

But these are far from the only styles that find their way into an earthy sound that has grown more multifaceted over time. “Jitterbug Love,” brings out another key influence — folk — mixed with some swampy blues, while folk also informs the playful “The One I Love.” “Think About My Death,” with its stinging guitar and brisk shuffling beat, and the freewheeling slink and boogie of “A Dream’s A Dream” add further richness and variety to “Kingdom In My Mind.”

The brothers took the opportunity that night to play together and discovered they still connected musically — as well as on a personal level as brothers.

They realized they wanted to continue to play together and formed the Wood Brothers. “Kingdom In My Mind,” was released in January 2020, and is the group’s seventh full-length studio album. The group also has put out five live releases, including “Live at the Fillmore,” which was released last year, and a covers EP.

Along the way, the group expanded to a trio, with drummer Jano Rix, who started out as a hired hand, becoming a full-fledged band member in 2010.

Wood said he is looking forward to seeing how the trio can continue to evolve both current and older tunes as the group continues to get back into the swing of touring.

“There are certain songs that come together in the studio in such a way that you have to reinvent them a little bit for the live performance, which we love to do anyway,” Wood said. “And we often rearrange old songs to make them come across a little different, make them interesting in new ways. Yeah, it’s all part of the fun challenge.”

That kind of spontaneity played a big role in the making of “Kingdom In My Mind,” as the group approached the songwriting and recording in a way that encouraged pure, open ended creativity and resulted in what Wood feels is the most authentic Wood Brothers album to date.

Ahead of the project, the group converted a building they were co-renting into a full-fledged studio, and this influenced how the trio started work on the album.

“As soon as we got the studio set up, in order to kind of get to know the space, we did about five or so days of just playing and recording over the course of a few months and just improvised,” Wood said.

“So starting first with no compositions and completely being free to improvise and explore all of the musical things that each of us is able to do in an improvised context, allowed things to magically, spontaneously happen that would never happen otherwise,” he said. “Then the songwriting came out of that. We started to write songs over that material, started to edit that material down into forms and overdub over them and add lyrics and maybe another instrument here or there, but always retaining that original spark of the improvised material. So that for us was exciting, and it felt like the most honest approach yet to not only the songs from us, but the actual original music. It kind of represented each of us as individuals and then what we can do together as a group.” ¦