SOMETHING TO CROW ABOUT 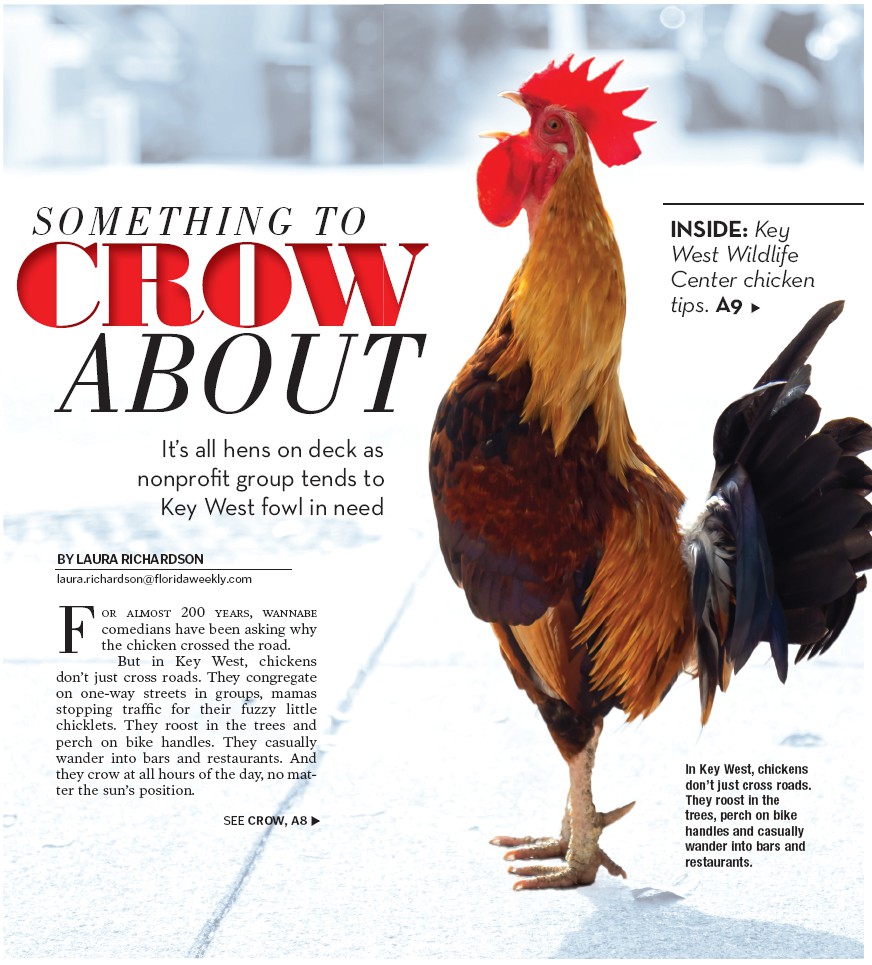 FOR ALMOST 200 YEARS, WANNABE comedians have been asking why the chicken crossed the road.

But in Key West, chickens don’t just cross roads. They congregate on one-way streets in groups, mamas stopping traffic for their fuzzy little chicklets. They roost in the trees and perch on bike handles. They casually wander into bars and restaurants. And they crow at all hours of the day, no matter the sun’s position.

If you’ve been to Key West before or have only strolled around the island for a day, you’ve undoubtedly noticed our unofficial mascot. To some, Key West’s gypsy chickens are a novelty, another fixture that gives the island a funky and unique vibe. To others, they’re worse than a nuisance, unsanitary, loud and obnoxious. But opinions aside, Key West’s colorful roosters and hens are as iconic as Sloppy Joe’s — and they’ve been around a lot longer than Hemingway’s favorite bar has.

Key West’s first wave of chickens arrived in the 1800s, when Cuban and Caribbean settlers brought the large and aggressive Cubalaya breed to the island as both a food source and a sporting accessory. Hens provided eggs and their male counterparts provided endless hours of back alley cockfighting entertainment. A second wave flooded the island in the 1950s, when revolution in Cuba displaced both humans and their fowl. 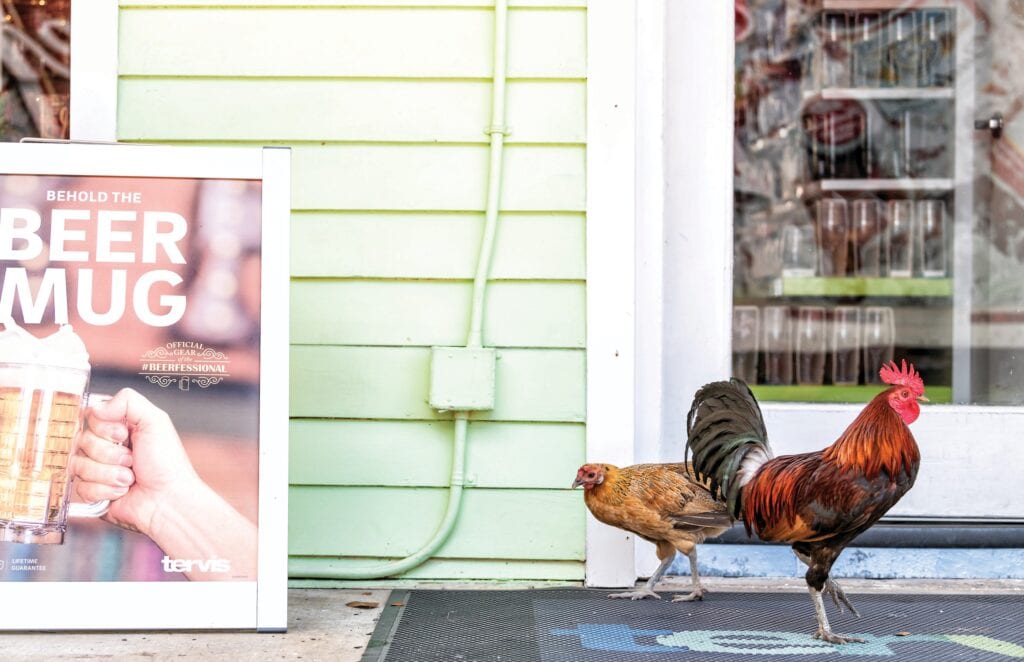 Feral chickens strut their stuff in front of the Tervis Store on Front Street in Key West. The chickens have become the city’s unofficial mascots. COURTESY PHOTO

Key West banned cockfighting in the 1970s, which sent many roosters to the streets. In addition, Key West’s evolution away from agrarian traditions resulted in fewer backyard chicken coops and more grocery meat counters.

Protected by local wildlife regulations and without homes or distractions (or a significant source of avian population control, however barbaric), the chicken population proliferated exponentially — so much so that in 2003, Key West city officials declared war on the crowing creatures, rounding up roosters and installing holding pens where hens and chicks could be held while awaiting relocation. 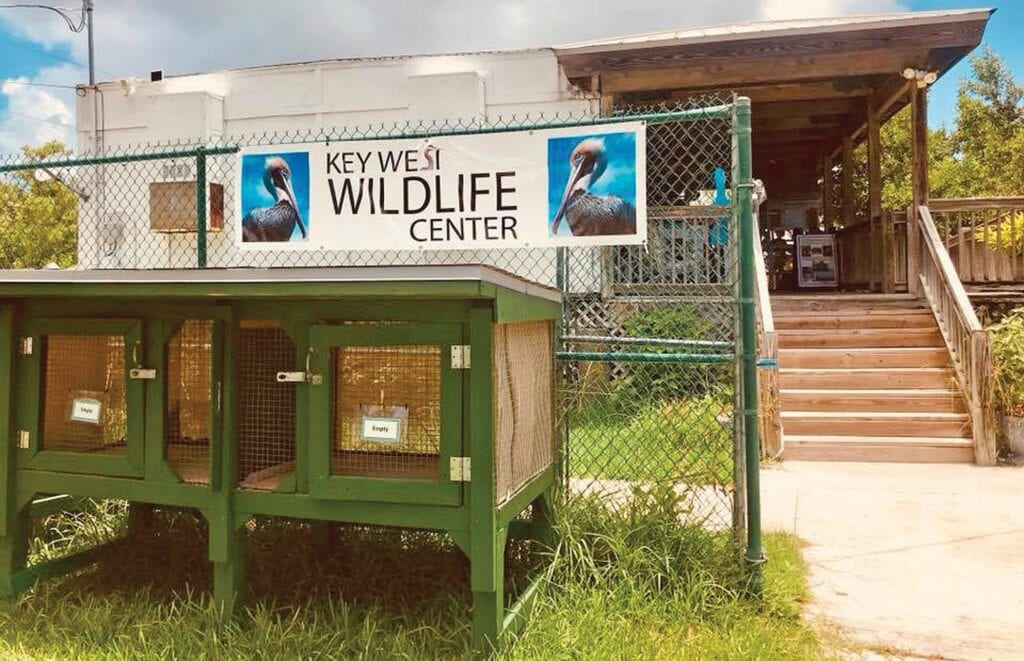 In 2004, the city hired Armando Parra, a local barber and self-trained bird catcher, to serve as the official city chicken catcher. The intention was to move the birds to free-range facilities in Miami-Dade County, but when officials suspected the birds were secretly being killed, local chicken advocates were furious. The chicken controversy commotion resulted in ChickenFest, a one-time, four-day festival dreamed up by local chicken-loving event coordinators in 2005.

Fowl enthusiasts flocked to the festivities, dressing in feathered headdresses and chicken suits and donning plush chicken caps and rooster beaks to compete in the “Fowl Follies” talent and costume competition. There was a Fowl Ball, a rooster crowing challenge, a Funky Chicken dance contest and a Foghorn Leghorn lookalike contest. The event culminated in a Poultry in Motion parade that featured dancing chickens, a Colonel Sanders lookalike and “Chicken Caesar,” a 12-foot-tall, toga-wearing rooster. And even Mr. Parra, whose chicken catching antics were the impetus for the festival, got in on the action, selling T-shirts and judging the chicken beauty contest. 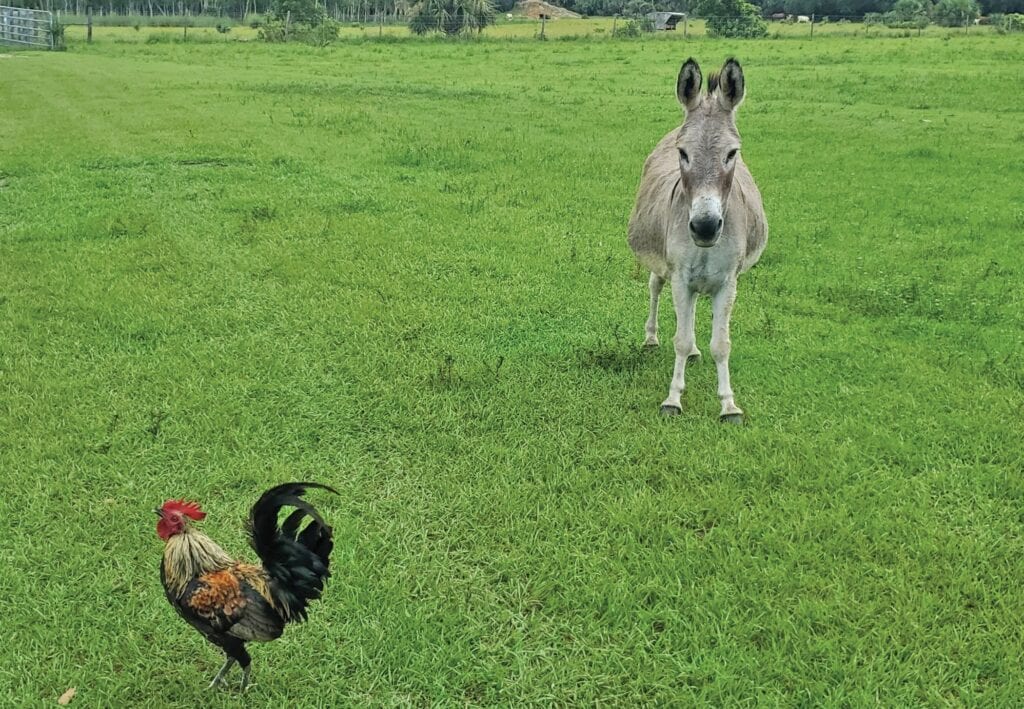 And so, despite city officials’ best efforts and assisted by the urging of zealous poultry lovers, the gypsy chickens remain. And when Key West’s winged residents get birdie boo-boos, the Key West Wildlife Center makes sure the injured, sick and orphaned chickens are well cared for.

The Wildlife Center’s stated mission is to “ensure the future of our diverse native wildlife by providing timely rescues and quality rehabilitation with the hope of release back to the wild.” The Wildlife Center acts as a field hospital and trauma center for native wild birds and holds both state and federal rehabilitation permits from the Florida Fish and Wildlife Conservation Commission and the U.S. Fish and Wildlife Service.

The Key West Wildlife Center sits on seven acres of land inside the Indigenous Park at 1801 White St. and is open to the public every day but Wednesday. The nature trail inside the facility includes a freshwater pond and two aviaries and is a great place from which to observe migratory birds during the fall and spring migrations. The Wildlife Center also operates an onsite clinic, which enables the staff to provide treatment to injured and sick wildlife 24/7, amounting to over 1,400 native wild birds annually, including hawks, pelicans, osprey, egrets and herons.

In 2009, the Wildlife Center entered into a concession agreement with the city of Key West to provide rescue, medical care and adoption services for the island’s feral chickens. The Wildlife Center’s other rescue and rehabilitation services are funded solely through donations, but the chicken services are funded through the concession agreement with the city of Key West. The center emphasizes cleanliness and nutrition and provides a high protein chicken feed enhanced with fresh produce donated by St. Mary’s Star of the Sea Food Pantry.

According to Tom Sweets, director of the Key West Wildlife Center, the center currently has about 30 local hens, roosters and younger chickens residing in its aviary. The chickens suffer from a variety of ailments, from avian pox and botulism to cock-fighting injuries and broken wings. “We get a high number of rescue calls each year regarding Key West chickens struck by vehicles, abandoned by owners, fallen or trapped in storm drains, shot by darts and pellet guns, and many other sick, injured and orphaned birds,” Mr. Sweets said. “We have had interesting survival stories of roosters. One was shot through by a bow and arrow, and we treated several birds that survived dart gun attacks after being shot. We were able to successfully remove the various projectiles and the birds did survive.”

Though the Wildlife Center is happy to provide a temporary loving home to birds in need, it does not actively seek out the birds themselves. Residents can borrow a trap from the Wildlife Center for a refundable deposit, then bring the captured birds in for rehabilitation. “We act as a rescue for sick and injured birds — we do not trap birds ourselves,” Mr. Sweets said. “We will accept birds that are brought to our center from local Key West residents and businesses. We do not remove feral chickens from residential or business situations. There are private companies in Key West that provide removal services for those that want it.”

Although the general goal of wildlife rehabilitation is to provide professional care to sick, injured and orphaned wildlife so that they can ultimately be returned to their natural habitat, the chickens rehabilitated at the Key West Wildlife Center typically do not get turned back out onto the streets. “We provide rescue services, care and treatment with an emphasis on cleanliness and a quality diet,” Mr. Sweets said. “We then find the chickens great free-range adoptive homes in mainland Florida that adhere to strict criteria.”

Since June 2011, the Key West Wildlife Center has worked to partner with a number of mainland properties who can provide care and good homes for the rehabilitated Key West chickens. The Wildlife Center moves more than 1,000 birds a year to participating properties. Peat Marsh Ranch, located just north of Lake Okeechobee, is a 1,200-acre facility where the birds can live free-range. The Wildlife Center also partners with the owners of an eight-acre property outside of Fort Myers, where many chickens have found a loving home.

At organic farms on the mainland, Key West’s chickens provide natural pest control. To prevent hungry birds from eating the crops, the chickens are released into large net tubes that stretch between the crops. In the tubes, the chickens can eat invasive insects and naturally fertilize the soil.

Even though birds are exported by the thousands, it often seems like there are more chickens in Key West than people. But Mr. Sweets can’t say for certain whether the birds are more populous lately than usual. “Without doing a survey count, it would be impossible to say what the current trends are in the feral population numbers,” he said. “The feral chickens move around and exploit different areas for food and then move on, so it would be hard to say about overall numbers without a survey or count.”

However, there is one chicken-related trend that Mr. Sweets finds disturbing.

“There is a trend of more people feeding them, which will bring chickens into an area or neighborhood to stay,” he said. “Feeding these birds is never good — it leads to disease being quickly spread through a population and usually leads to more birds being struck by vehicles when they are fed in streets or parking lots. Put simply, these feral birds do not need to be fed by humans — it causes all types of problems for them.”