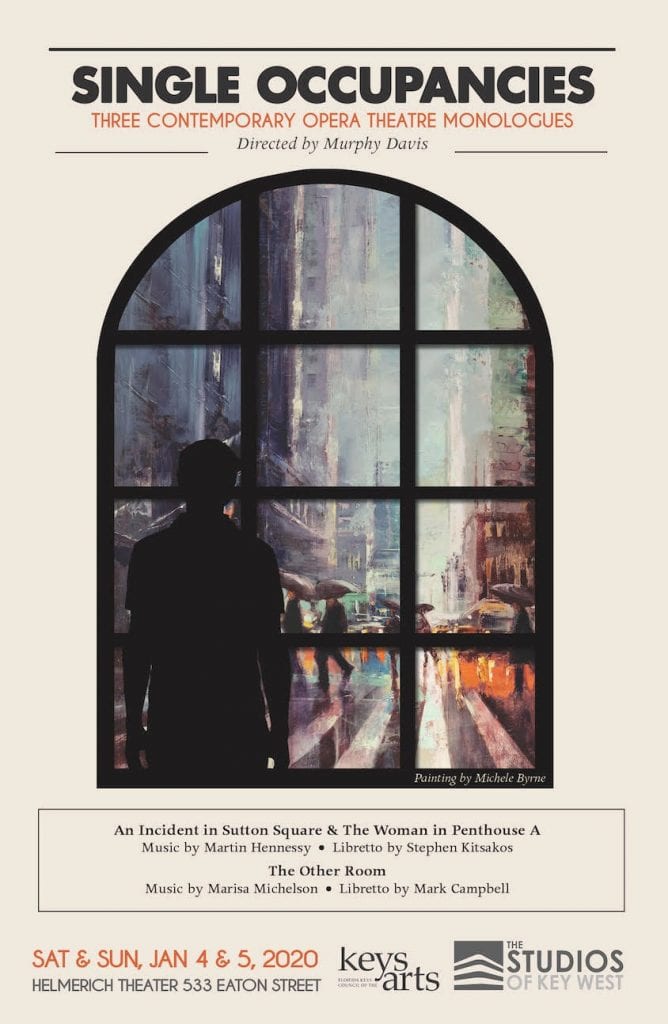 Earlier this month, Mark Campbell and Stephen Kitsakos teamed up to disrupt the art scene with “Single Occupancies,” a collection of contemporary opera theater monologues. Directed by Murphy Davis, Campbell’s “The Other Room” and Kitsakos “An Incident in Sutton Square” and “The Woman in Penthouse A” ran for two nights at The Studios of Key West.

Cuban plots. Rising sea levels. Madonna, allegedly, in the pre-2000s. All random albeit momentous things that have blown through Key West to legendary lore. Zeroing in on the arts, you rattle off names like Shel Silverstein and Tennessee Williams. Their work swept through the island with plots that pummeled readers and viewers like gale force winds. You could also recall sweeping tapestries that breathed life into gay rights before the Supreme Court would make it a thing.

But not all guests are well received. Least of all, the ones exacerbated by climate change.

2017 marked not just my first encounter with Key West, but the whiplash of Hurricane Irma. People left. New people came. Things were blown apart and blown together. Yet, cautiously optimistic, islanders whispered that something of a cultural revolution had been triggered by all this change. Fantasy Fest was cleaning up its act. Locally grown ventures including Comedy Key West and The Mermaid Festival shined. Even the previously uninspired began pulling out all the stops with costumes, stilts and kinetic sculptures to stake their claim in this 30,000 member strong “renaissance.” 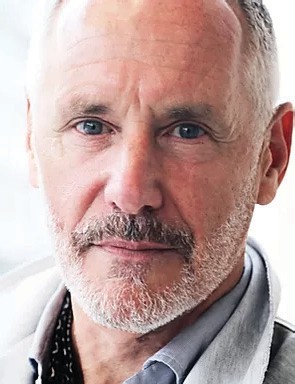 Now, here we are. A new decade. Despite a housing crisis largely unaddressed and the looming environmental disasters, we’ve made it this far. Mostly together. And as a pack of diverse creatives with our backs to the worst of the winds of a few years prior. What would we spark next? What slice of the arts would be ripe for reshaping? It appears that a few writers, sopranos, tenors and composers have found one possibility — or at least a singular component of it. 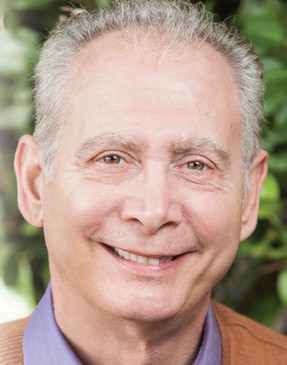 I imagine librettists — operatic writers — Mark Campbell (“Silent Night,” “(R)evolution of Steve Jobs”) and TSKW Board President Stephen Kitsakos (“A Thousand Splendid Suns,” novel “The Accidental Pilgrim”) questioned why current opera could not as quickly reach as wide of an audience as, I don’t know, Cardi B.

Nationwide, the critical and financial success of retooled or fresh works signaled the inevitable transformation of almost every other field within the arts. To brave one of its last largely untouched frontiers — opera — Campbell and Kitsakos likely agreed on three vital things:

One, that younger generations are generally not connecting with the subject matter of opera. To wit, “The Magic Flute” conjures entirely different and naughty meanings for a twenty-something.

Two, that average opera run times are far too long. Maybe you could get someone to sit through a multiple hour PBS broadcast at home, where you have the comfort to sprawl out, check Twitter for impending nuclear fallout and relegate the TV to Italian background music as you search for the latest episodes of “Fleabag”. However, putting more butts in venue chairs would necessitate shorter run times. This would tackle limited attention spans along with our thirst for faster plots with less fluff.

And thirdly, that opera would have to be democratized. More revenue and a more diverse audience would require leaving the great metropolitan coastal bastions, scripting in languages beyond Italian and producing performances at a fraction of the cost. A diversity of language and affordable ticket prices would undeniably make opera more accessible.

Opera requires some overhaul for the 21st century. Assuming you want to disrupt it, of course. So, Campbell and Kitsakos combined their respective librettos into “Single Occupancies.” Styled as “contemporary opera theater monologues,” these limited-run touching portrayals are split across three bite-sized performances clocking in around 30 minutes each. In inglese.

Inspired by Kitsakos’s own rattling experience while walking his dog, “An Incident in Sutton Square” made its debut. It focuses on a young man (tenor Daniel Curran) who suffers from OCD and the grief triggered by the loss of his canine companion. Curran provides a smart introduction to opera with his belting notes and ease of traversing the stage. This is a character who appears to be losing control portrayed by a tenor who is doing anything but. The unrestrained mutterings of “1, 2, 3, 4, 5” and compulsive counting build to a phonetic race through New York City. Bodegas, dog walkers, East 58th Street, terrier mixes and beagles punctuate the monologue.

The theatrical and deliberately odd-metered music by composer Martin Hennessy lightens Curran’s breaking the fourth wall and his grappling with the tragedy of it all. You eagerly watch him, not knowing if his character is on the brink of a breakdown or breakthrough, as he furiously moves through the set, a lonely apartment that’s probably the result of rent control or a successful actuarial career. The audience stays with the robe-clad character, equal parts captivated and surprised that such a powerful voice rips through Curran’s willowy, floppy-haired frame. And at the end, when his character realizes that he is figuratively on a leash, you could tell the audience had bought into this new format.

Kitsakos and Hennessy teamed up again for “The Woman in Penthouse A.” Mrs. Bakshlevi (soprano Vira Slywotzki) settles into her opulent living room to regale an unseen reporter with her life’s story. Increasingly, it morphs into a defense of her current predicament and an apparent web of lies. It’s worth noting that costumer Carmen Rodriguez constructed ensembles that were believable and rich without distracting from the monologues. The more you digest the shimmering Mrs. Bakshlevi’s reasoning — “What are lies, really, but our versions?” — the more you can place her out of her penthouse and into the house next door to you or behind a desk on network television.

Mrs. Bakshlevi is a symptom of the fake news era and Kitsakos’ likely incredulity at the ease of lying in 2020. And just as we have inundated our brains with fake news and information we’re not sure we want to fact check, you guiltily care less and less and settle in for the ride. That happens here. You forget about the off-stage reporter. You forget if this is even all true. You take Mrs. Bakshlevi’s words increasingly as a fantastical tale and less of a genuine biography. It’s harder to care about validity as long as you’re entertained, right? It is funny. Where the other dialogues focus on death and assisted suicide, “Penthouse A” encourages you to laugh at the absurdity of it all. Complete with references to a husband that makes his fortune from fake Viagra and a last-ditch attempt to retroactively make the conversation off-record.

It’s sort of obligatory to mention that librettist Mark Campbell’s works have earned both a Pulitzer and Grammy, among other recognitions. It doesn’t guarantee you’ll like his work, but it signals that at least in two important moments in time, he had his finger on the pulse of what a national audience wanted now. “The Other Room” (and the entirety of “Single Occupancies”) is trying to get ahead of the curve to predict what live performance audiences will increasingly want in the future: shorter understandable stories that nix some of the hysterical plot points of past opera.

As an aside, on opening night, Campbell wore great socks. Smashing socks. A kaleidoscopic delight. It was the first thing I noticed before I knew who he was. And here’s the thing about people with funky footwear: they tend to give less of a shit about what other people think of them. If his post-performance Q&A was anything to go off by, Campbell really doesn’t give a shit about breaking expectations and portraying controversial topics. He half-seriously jokes that the only thing more expensive than war is opera and that the term “high art” is best reserved for things you’ll never be able to see.

Seizing this gumption, “The Other Room,” with music by Marisa Michelson, addresses death head-on with a life-changing conundrum that some of us have experienced. If a loved one was dying from HIV/AIDS during the epidemic, you may have found yourself assisting their suicide just as casually as you would’ve dropped by their home to fix supper. It’s what some considered a merciful alternative. And it is what it is. This happened. Innumerable times around the country. Lovers. Besties. Family members. That’s precisely what faces the character Lena (Molly Ranson) as she paints in the apartment of her friend Steve, who is drawing his last breaths in the other room.

This closing dialogue offsets the severity of impending death with pop notes and deliberately questionable dancing. Bathed in murky green lighting, Ranson deftly fields alternating moods. One moment, she’s reacting to messages that are a little too late on flamboyant answering machines and the next, Lena’s coming to terms with funny but heartbreaking postscripts. While Campbell originally debuted this in 2014, the character’s critical aims at health care and activism probably ring truer now than they did even a short six years ago. That’s is quite the thing to let sink in. That we could be hurtling toward a time where such a scene is no longer a shocking confinement of the past.

Between the gushing intermission chatter — “How cool is this thing?!” quipped more than one patron — and the excited confessions that this was many a sophisticated individual’s first exposure to opera, the night headed toward a success. The post-show praise sealed it.

“It’s amazing that we get to see (such) performances in this space. I’ve seen it transformed so many times in the past year-and-a-half. ‘Single Occupancies’ is something really unique with incredible talent in this room,” said Scott Burau, a resident and senior manager of real estate services at Deloitte LLP. It is a view that was increasingly echoed throughout the night.

“Single Occupancies” is exciting and inventive enough to join the latest swirl of artistic forces that, with enough financial backing and exposure, will fan this island’s cultural revival and ruffle enough conventions along the way. “Single Occupancies” is opera and it isn’t. Its fluidity gives it an out to continue evolving. Maybe this new format will lend itself to streaming giants and iconic venues? Maybe it dies in small art houses and obscure theaters across the country? If this new style catches on — I lean toward it being “when” and not “if” — it won’t magically displace traditional opera overnight or even over the course of a decade. But it could very well go on to become the most popular version of opera that future generations know and, importantly, like.