‘SINGLE OCCUPANCIES’ comes to The Studios of Key West 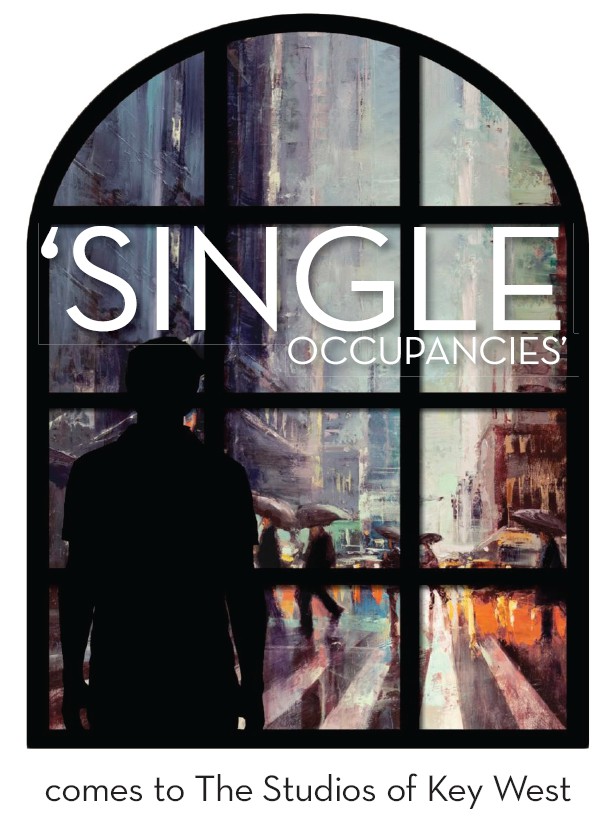 When it comes to the creative arts, novelty seems to be in short supply these days. Moviegoers in 2019 saw remakes (“The Lion King,” “Dumbo,” “Pet Sematary”), franchise reboots (“Shaft,” “Hellboy,” “Terminator: Dark Fate”) and sequels (“The Rise of Skywalker,” “Jumanji: The Next Level,” “Maleficent: Mistress of Evil”). Movies have been adapted into Broadway shows (“Moulin Rouge!”) and Broadway shows have been adapted into movies (to dubious success, if the reviews of “Cats” are any indication). Jukebox musicals abound (although if anyone tries to talk smack about “Jagged Little Pill,” I won’t hear it) and revivals are rampant (“West Side Story” and “Oklahoma!” received rave reviews this year and last).

When it’s so easy to take the intellectual property of those who came before us, give it a little “zhuzh” and send it out into the world as the (sort of) new and (sometimes) improved version of something that didn’t need to be new or improved in the first place, it seems all the more impressive to encounter works that touch on as yet uncharted thematic territory. Couple a new story with a rarely seen format and you have the recipe for “Single Occupancies,” an evening of operatic monologues presented by The Studios of Key West on Jan. 4 and 5.

“Single Occupancies” is a presentation of three contemporary one-act opera theater monologues, two of which are world premiere performances by Martin Hennessy and Stephen Kitsakos and one of which is a regional premiere by Mark Campbell and Marisa Michelson. Scored for piano, cello, clarinet and double bass, and sung in English, the storylines are riveting, fresh and relevant. Each 30-minute piece introduces a singularly unique character and the modern take on a centuries-old form (the first Baroque opera, “Dafne,” was performed in 1597 in Florence, Italy) proves that opera is just as powerful, funny, emotional and relevant as ever. 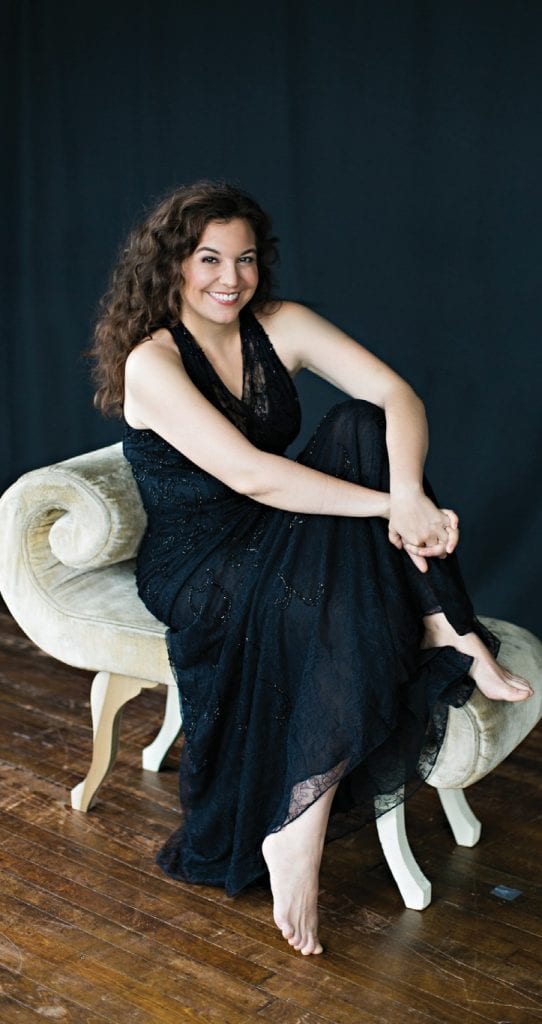 “We’re calling these ‘opera theater monologues’ because we feel like they have one foot in opera and one foot in musical theatre,” says Mr. Kitsakos. “My composer, Martin Hennessy, writes for the opera voice, but his score imbues a lot of tropes that would be considered musical theater tropes — he quotes Sondheim or Bernstein and uses jazz-like elements in his scores. Marisa Michelson, who composed ‘The Other Room,’ wrote a gorgeous score for piano and cello that skews more towards the musical theater genre, but she asks the singer to do many vocal things that opera singers are asked to do.”

In the first of the operas, “An Incident in Sutton Square,” the audience encounters Danny, a young man with obsessive-compulsive disorder, who has an absurd encounter with a Manhattan dog walker that triggers his grief over the recent loss of his own beloved pooch. The role of Danny will be sung by Daniel Curran, a graduate of The Juilliard School who just completed the world premiere of Ted Rosenthal’s “Dear Eric” with NYC Opera.

The second piece, “The Woman in Penthouse A,” is a conversation between an international socialite who has been accused of a crime and an unseen journalist. The socialite, Mrs. Bakshevli, is played by soprano Vira Slywotzky, who has performed principal roles with Seattle Opera, Chautauqua Opera, Boston Midsummer Opera and Chelsea Opera. The piece, written by Martin Hennessy and Stephen Kitsakos, blurs the lines between fact and fiction.

The third of the operas, “The Other Room,” features a libretto by Pulitzer winner Mark Campbell, whose “Stonewall” just opened the New York City Opera’s season. “The Other Room” depicts an artist as she paints a canvas and awaits the inevitable after assisting in the suicide of her friend dying of AIDS. The role of the artist, Lena, will be sung by Molly Ranson, whose Broadway credits include “Fish in the Dark,” “Jerusalem” and “August: Osage County.”

“I interviewed Mark for a magazine called The Sondheim Review a few years ago,” Mr. Kitsakos says. “We hit it off and he invited me to go to a performance premiere of a piece he had just completed that he called a “monodrama” — essentially, it’s a 30-minute monologue that is completely sung through by one person that has a character who makes a complete arc in that short period. ‘The Other Room’ was so poignant and hopeful in a way that it shows the power of friendship that can transcend anything. I was blown away by it in its simplicity in the power of the words and the music.

“At the time, I had just delivered a libretto for ‘A Thousand Splendid Suns’ and I was looking for an opera project, but not something that was as enormous or consuming as a two-act, full-length new opera. After seeing ‘The Other Room,’ I decided I wanted to write something in that format. Mark hooked me up with composer Martin Hennessy, which was a match made in heaven. We have totally compatible sensibilities and we collaborate incredibly well. We’re a bit like the odd couple in a way, but we enjoy meeting and talking about ideas.”

From that introduction, Mr. Kitsakos and Mr. Hennessy crafted “An Incident in Sutton Square” and “The Woman in Penthouse A.” “’An Incident in Sutton Square’ deals with a particularly disabling subset of OCD called arithmomania, in which you are obsessed with counting and organizing things in numeric sequence. I had experienced a dog walker on the street that did something that upset me, so I created this character who is mourning the loss of his dog and he has an encounter on the street with a dog walker. In the piece, Danny breaks the fourth wall to recount his experience with this dog walker to the audience. What I love most about this piece is that Danny counts in fives, so Martin took that as a challenge to compose the score in odd meters. In so doing, he really brought this character to life.”

But Hennessy wasn’t content with just one piece, so over the next six months, Kitsakos created a companion piece, “The Woman in Penthouse A.” “This piece is based on a composite of characters, mostly worldly women, who create their own story,” says Kitsakos. “I was ruminating on the idea of things like alternative facts and I came up with this character who is a woman with an accent and she has been accused of a crime. She’s living in a penthouse in Istanbul and clearly has money and she is being interviewed by an unseen journalist who she has invited so that she can tell her side of the story. Somewhere along the way, we start to think that there’s a blurring of what’s true and what isn’t true, but I’ve chosen to make her a heroine even though she may be totally full of shit. Martin composed a gorgeous score for soprano and included the santoor, a Persian instrument, to give it more of an exotic flavor.”

Though the three pieces are thematically diverse, Mr. Kitsakos believes there is more that unites them than meets the eye. “First, they all share similar settings,” he begins. “They all take place in the living room of an apartment — one in Sutton Square, in a penthouse in Istanbul, and in Chelsea. Second, they also have one character who controls the narrative arc, but the person who’s doing the singing is either addressing or talking to a ‘shadow character’ who is not in the room with them. Third, all three characters are trapped. Danny is trapped by his disability, Mrs. Bakshevli is trapped in her apartment because she’s afraid Interpol is coming any minute to arrest her, and Steve, the man dying of AIDS, is trapped by his disease.”

If the thought of the opera evokes visions of men in tuxedos and fat ladies singing, “Single Occupancies” couldn’t be further from the typical opera stereotypes. “Opera was considered to be a form of popular entertainment in the 20th century, but it’s taken on this elitist association, which is ironic to me because in Europe all classes of people knew the great operatic works,” Mr. Kitsakos says. “But in the 20th century, I think maybe because people don’t speak languages other than English, they find it inaccessible. Over the last two centuries, musical theatre evolved from an amalgamation of jazz and ragtime and became identified with American popular culture. Therefore, things like opera were relegated to those who had more sophisticated tastes. Interestingly, contemporary opera has been having a resurgence in the last 20 years, with many new American operas being written in English.”

And for entertainment that pushes boundaries, The Studios of Key West was a natural venue choice to host “Single Occupancies.” “The Studios is committed to doing things that exist outside the lines,” says Mr. Kitsakos. “We’re taking the classical opera format and making it more contemporary. It’s also an opportunity to see and hear performers who are not locals but are working with locals — one of the formulas that I think is a wonderful formula is when we merge visiting artists with Key West artists. The three performers and two musicians are coming from New York, but they will be directed by Key West resident Murphy Davis on sets and inc costumes designed by locals Anthony Palmer, Ben Pegg and Carmen Rodriguez. It’s nice to have a fresh perspective with home-grown influence. And if not at the Studios, then where?”

As a special component of the event, The Studios is delighted to have Mark Campbell present a post-performance talk each evening. Librettist of the Pulitzer- Prize-winning opera, “Silent Night,” Mr. Campbell is perhaps the most prolific and well-known librettist of new American opera. Among other topics, he’ll be sharing his thoughts on what it’s like to write LGBTQ characters for the contemporary opera stage.

“The strength of these pieces springs, in part, from their brevity,” says Mr. Kitsakos. “Like a powerful short story, these narratives begin in media-res, presenting an immediate and fascinating slice of life. Because these pieces were written as monologues, the audience finds itself playing confidant to characters who, all in their own ways, are terribly alone. The characters grab you by the collar, compel you to look closely, and of course, to listen.”

“Single Occupancies” is sponsored in part by the Florida Keys Council of the Arts, the State of Florida, Department of State, the Division of Cultural Affairs, the Florida Council on the Arts and Culture and by private donations generously provided by patrons of The Studios. Ticket prices range from $50 to $100, with discounts for Studios members. For tickets, call The Studios of Key West at 305-296- 0458 or visit www.tskw.org. ¦