Robert the Doll wants respect, or else 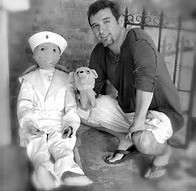 It’s called “Haunted Key West,” and it’s terrifying — as is the follow up Sloan published a few years later, “Ghosts of Key West.” (If you’re sensing a theme, congratulations! You might be blessed with the coveted paranormal phenomenon of ESP.)

Sloan has made a business of scaring the pants off people who travel to the Southernmost city for a little relaxation. It’s a passion of his, one that compelled him to start the first ghost tour in Key West (and one of the first in the country) back before paranormal culture was mainstream. Others have since set up shop in town, bringing a dark fleet of trolleys along with them to fight for customers who are looking to get a little spooked on vacation. But Sloan’s tour isn’t your run of the mill jump-and-scream stroll through the cemetery. He outfits his customers with top of the line ghost hunting equipment (yes, you can leave your K-II EMF Detector, IR Laser Temperature Guns and spirit dowsing rods at home — Sloan will lend you his for the night.) He also makes sure to bring plenty of “trigger objects” along each evening, in order to lure out ghosts for maximum scaring potential. He’s dead serious, you might say, about the work he does. And he prides himself on getting his customers access to some of the most coveted, and private, haunted areas of Key West.

What they see there? Well, that’s up to the ghosts.

In the years since he pioneered the Key West ghost tour, the paranormal enthusiast has become the go-to for any and all things creepy, spooky or otherworldly in town. You could say that it’s in his blood; his grandparents ran a haunted hotel where Sloan spent his childhood honing the ghost hunting skills that have now made him so famous. He’s who the Travel Channel and “The Tonight Show” call when they’re in need of a comment from a Key West ghost expert. And oh, man, is there plenty to comment on. Often listed in the top five most haunted towns in America, Key West has seen its fair share of seriously disturbing stuff over the years, including murdered Klansmen, botched hangings, necrophiliac doctors, disturbed slave bones, Santeria sacrifices and enough gruesome yellow fever and typhoid deaths to build a whole zombie army. But when it comes to the ghosts and ghouls of Key West, there’s one name that seems to surface more than all the others combined — one that strikes fear into the hearts of visitors and locals, the latter of which will tell you, straight-faced, that they’d rather not be interviewed for an article such as this one, because they “don’t want to make him angry.”

In case you’re not familiar, he’s made of mohair. He’s about the size of an opossum. He lives in a protective box inside a Civil-War-era fortress by the sea, and known for being very, very particular about having his picture taken. Just ask the hundreds of apologetic visitors who’ve written him letters begging for forgiveness after they snapped a disrespectful selfie in front of Robert. They write that they are sorry, deeply, hugely sorry and beg for forgiveness. They write in the elegant cursive of adult penmanship and in the scrawled crayon of children. They write postcards, double-sided letters, emails, describing bankruptcies, canceled flights, car crashes, divorces and sudden illnesses. But in the end, they all beg for the same thing: for Robert to make the bad things stop, to “lift the curse.” And it’s not just visitors with trigger-happy photography skills who seem to have irked the world’s most fearsome doll. While researching for his 2014 book “Robert the (Haunted) Doll,” Sloan reports that he had a series of inexplicable and terrifying experiences that left him no choice but to believe in Robert’s powers.

I spoke to Sloan about how one gets started in the ghost hunting business, Robert’s history, what it is he thinks is actually behind all the misfortune that Robert supposedly causes his visitors and what people can do to avoid angering Robert in the future.

You’re considered Key West’s paranormal expert-in-residence. How did you begin to get involved with such a dark and creepy body of work?

I owe my career to a Native American spirit who hated cats. He haunted my kindergarten teacher’s home. She would tell us stories about him every day. She even showed us a photograph. I was hooked – and a believer – at a very early age.

I started in the ghost business before the Internet was around, so a good chunk of the available information was passed down by word of mouth. This left us with amazing ghost stories and legends, but many of the stories were degraded with each telling and it got to a point where details that started as facts evolved into fiction. I love research as much as I love ghost hunting, so when I have an opportunity to update a story with new information, I do it. There was a lot of misinformation out there about Robert and I felt an obligation to get the truth out. The truth doesn’t always make the best campfire story, but it deserves to be recorded. There are a few haunted locations where this is the case.

Anything specific come to mind that you’d like to set the record straight on?

Robert was not the inspiration for Chucky. Child’s Play creator Don Mancini has stated that the My Buddy Doll and Cabbage Patch Kids inspired his movies. Robert has parallels, but had nothing to do with it. Too many people will sacrifice the truth for a good story. Nobody wants to let this lie die. There’s another one about a 10-year-old girl who lived in the house “that swears to this day Robert tried to kill her.” No 10-year-old girl ever lived in the house. It’s a lie. His hair is not human either. It’s made of mohair. And he was not made by an angry slave.

What are some of the worst things that have been attributed to Robert’s vindictive powers?

Sickness, animals dying and lightning strikes. I believe there are other entities around Robert causing the problems. Robert is an innocent boy. A lot of people have been locked in rooms by the entities around Robert. Several car accidents have been attributed too. It is creepy how many people write letters describing various predicaments accompanied by the laughter of a child.

Can you give us the brief history of Robert’s journey from boyhood plaything to horror icon?

Robert was made by the Steiff Company in Germany, (the) people who invented the Teddy Bear. I’ve pinpointed his creation to 1904 and located documents showing Gene Otto’s mother (editor’s note — Gene Otto is the boy to whom Robert was given in 1904) traveling to the region the same year. Gene was 4 years old when he was given the doll, and the two became inseparable. People saw the doll moving on its own and heard it having conversations. This went on until Gene was an adult. There are a lot of theories about what makes Robert tick, but I’m pretty convinced the doll contains the spirit of Emmeline Abbott’s child. Gene wasn’t a crazy person talking to a doll. I believe he was tuned in and communicating with the spirit of a deceased friend.

Children see spirits until adults tell them not to. Think about “imaginary” friends. I think Gene was seeing a spirit and no one ever told him to stop doing it.

After Gene’s death, what happened to Robert between then and his permanent installation at East Martello Museum now?

Robert remained in the Artist House (ed. Note: the Artist House was the family home of the Otto family) for several years. Myrtle Reuter was his caretaker. When Myrtle sold the house, she took Robert with her to a home on Von Phister Street. She never had problems with him, but something happened in that house. They say Robert locked her in a room. She was freaked out and took him to the (East Martello). She died several months later.

Locals knew about Robert but he flew under the radar with visitors. I started the first ghost tour in town and one of the first in the country. I told everyone who came on my tour to go to Fort East Martello and ask to see Robert. Enough people were asking that they decided to put him on permanent display. The doll is a natural star and the spirits that accompany him are worthy of a visit, too. Hundreds of people see him every day now. It’s pretty cool that I helped to make this happen.

You’ve mentioned you believe that it is other entities, not Robert, who cause the problems often attributed to Robert. Care to elaborate on that a bit? Who do you think these spirits are, and why do you think they hang out around Robert?

It doesn’t make sense for the spirit of a little boy to cause so many problems. I believe there are a lot of entities out there looking for energy, and a lot of people who visit Robert bring negative energy or fear. I believe these spirits prey on that. Some psychics believe there is a portal in the fort and Robert is trying to stop anything bad from coming through. I don’t know what the entities are, but I do not believe they were ever human.

Much has been said about people needing to ask Robert’s permission in order to take his photo. How are people supposed to know if Robert (or the entities surrounding him) are in a good mood? Is there any point in asking if it’s okay to take a photo? Is all of that just a bunch of nonsense?

Robert should be treated with respect. It is people who disrespect him that run into problems. I don’t suggest asking permission because it empowers the entities. But respect the doll for sure. It’s all about respect.

Hundreds of letters arrive at the museum each year asking Robert for forgiveness. Overly sensitive people or anyone afraid of dolls should be cautious. The doll is powerful and there is still a lot we don’t know about him. I think people should be respectful, but not afraid.

So …. do you really believe in Robert the Doll’s infamous powers?

I’ve had first-hand experiences that leave me no choice but to believe. When I was writing the book I was yanked from my bed and levitated. Electricity shot from my fingertips. I lost three hard drives and the manuscripts that were on them. Everything was backed up but vanished. I’ve been told the entities around Robert are trying to give me cancer to shut me up. Time will tell. ¦ 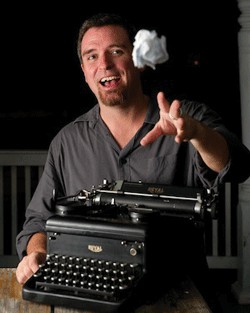