The pink celebrities of the Butterfly Conservatory 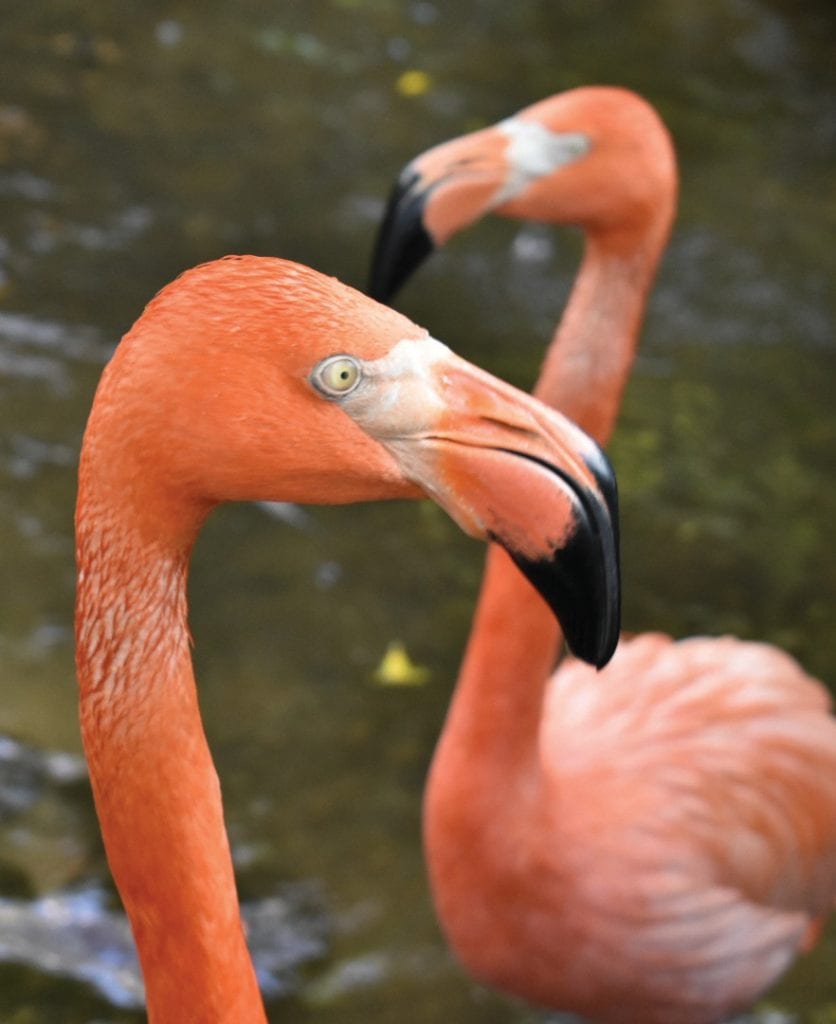 Rhett and Scarlett at home at the Butterfly Conservatory COURTESY PHOTOS

Ten years after its grand opening, the Key West Butterfly and Nature Conservatory took on a major project, introducing the 17-month-old, hand-raised Caribbean flamingos into its facility. After a six-month nationwide naming competition, the birds became Rhett and Scarlett. They have captured the public interest ever since and have set the conservatory apart from the many butterfly houses throughout the world.

Conservatory co-owners Sam Trophia and George Fernandez have always envisioned the nature conservatory side of the operation as something that must be exciting, different and appealing to all ages. It has to stand out; it has to be world-class and on the cutting edge of public perception as a must-see attraction in Key West.

Although admired and highly photographed since their first day on the property, Rhett and Scarlett’s celebrity status didn’t fully develop until July 2017, when conservatory buyer and social media manager Tracey Hodges started limiting her videos of the lovebirds to just Fridays (per the request of butterflies-only fans). Flamingo Friday was such a hit with social media viewers that Hodges began doing Facebook Live videos. 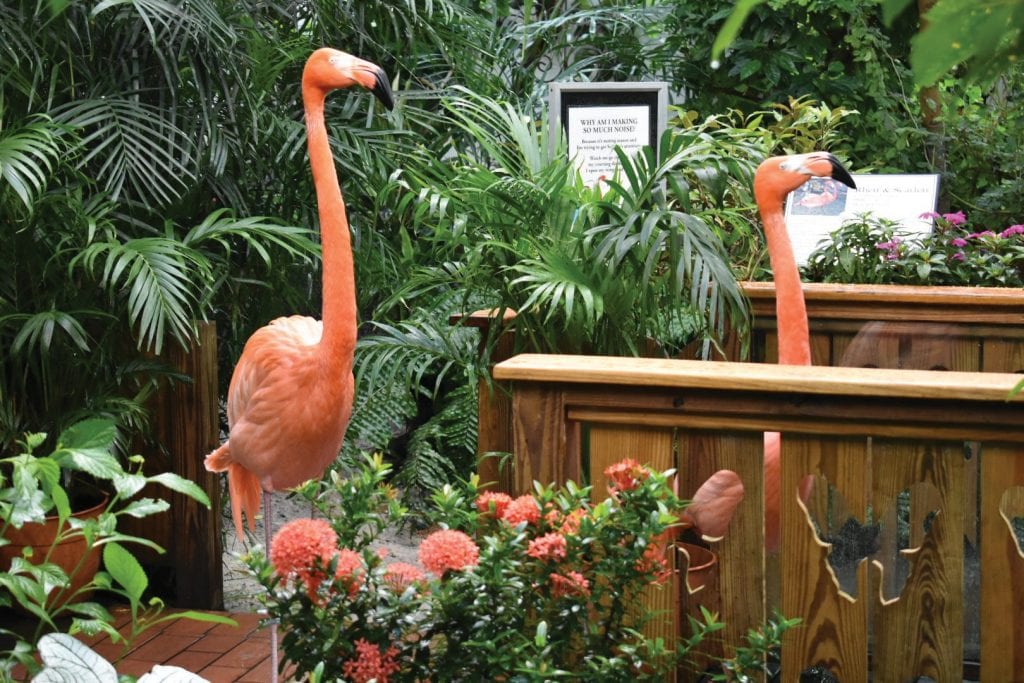 Rhett and Scarlett are no strangers to the camera. COURTESY PHOTO

“These videos are always fun and exciting for not only the viewers but also for me, because you just never know what is going to happen,” Hodges says about her ongoing series of posts.

In one particular video, she was sitting on the ground when Rhett decided to come over and give her a little “lap dance.”

“I just kept thinking, ‘Oh, please, don’t poop on in my face,’” she says, remembering that day fondly. The fun and spontaneous video remains the conservatory’s most popular post on social media, with more than 13 million views to date.

During mating season each year, Rhett and Scarlett always get an extra surge of energy and often want to explore beyond their pond enclosure — something they have no interest in doing the rest of the year. They have always had free rein to explore the full property after hours, but in the slow months after Hurricane Irma they seemed to be wanting more human interaction. 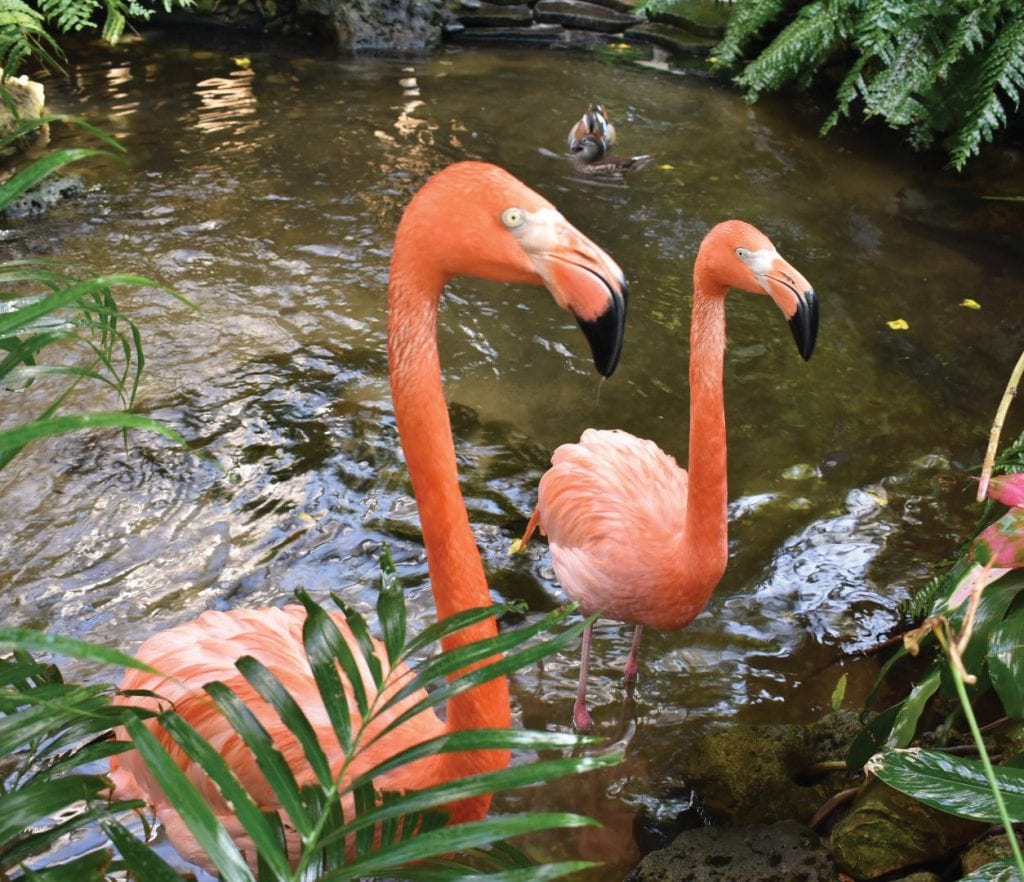 Rhett and Scarlett take a dip in their personal lagoon on a typical steamy Key West day. COURTESY PHOTO

General operations manager Clarisa Fluker would often come in long before opening hours with her 3-year old daughter, Quora, whom Rhett and Scarlett are so fond of many believe they might think she is their offspring.

“Rhett and Scarlett comb her hair and then they take turns playing chase. Quora runs first and they chase her, then they turn around and she follows them. It’s fun for all three of them,” Fluker says of her and her daughter’s interactions with the Flamingo pair. “They did this all day every day for the month of September, when we were closed after Irma. Quora didn’t have school and we didn’t have visitors. so the three could just play all day.”

Eventually, everyone returned to their regular schedules, but Rhett and Scarlett still seemed to be craving that extra time experiencing new things and meeting new people. Their expressed interest initially led the conservatory to try small groups of employees, family members and friends sitting and interacting with them after-hours a few times a week. It was soon apparent that Rhett and Scarlett thrived on this daily dose of love. Eventually this occasional interaction led us to what the Conservatory now calls a “Flamingle.”

With advance reservations — now being booked months in advance — a maximum of six guests per day can spend one hour after business hours socializing and enjoying a memorable close encounter with the conservatory’s Facebook celebrities. The flamingos decide what the interaction looks like. They often brush hair or try to sit on people’s laps. Sometimes they just want to stand and give a little show to entertain their guests with periodic bowing, dancing and prancing about.

The word “flamingo” comes from the Spanish and Latin word “flamenco,” meaning fire, and refers to the birds’ beautiful bright colors.

At birth, chicks are fluffy white or gray. In nature, they are fed by both parents their nutritional crop milk for five to 12 days after hatching.

In time, through their beta carotene intake of shrimp, algae, plankton and crustaceans, they attain their iconic bright pink color at approximately 2-3 years of age.

As adults, Rhett and Scarlett consume these essential dietary items in the dry food pellets they thrive on throughout the day.

The unique way in which flamingos are able to feed is also rather interesting. They are able to bend their necks to feed literally upside-down. They are filter-feeders by nature, and that process involves them being able to take in food, which is quickly followed by the intake of water to facilitate its move down its rather lengthy esophagus.

One of the most common questions asked about the flamingos has to do with their trademark characteristic of standing on one foot while at rest. Research has shown that this lets them conserve energy and helps prevent body heat from leaving the body so they are able to better maintain the perfect temperature.

Flamingos sleep while standing up and can change from one foot to the other while doing so.

Their ritualistic body movements — preening, marching and synchronized bowing, over and over again — seem to be driven by some internal mechanism.

In a flock, also known as a “flamboyance,” flamingos mate at the same time, something very few animal species are known to do. This means mothers give birth within a few days of one another.

During their breeding season, flamingos lay one egg. They mate for life and have a lifespan of approximately 20 to 30 years.

In captivity without predators, flamingos can live to up to 50 years.

The arrival of Rhett and Scarlett at the conservancy from a breeding facility in Toronto has helped lead to the butterfly house being voted the No. 1 attraction in the Key West People’s Choice Awards for the past 15 years, along with TripAdvisor and Yelp.

The conservatory is a magical audiovisual sensory experience for young and old alike. For many, it is a rare opportunity to walk through a tropical world filled with more that 1,000 free-flying butterflies in a landscape of cascading waterfalls and floral elegance, as well as many exotic birds and animals.

It’s a destination locals and tourists have come to love and enjoy time and time again. ¦