Scot Forste is every bit as mischievous as the gaze he’s hiding behind that Stormtrooper mug. COURTESY PHOTO

Richard Scot Forste: Did you know, according to me, there are more than one type of pasta worldwide? Curiously, all but one end in a vowel. Unless you suffer from celiac disease, in which case, pasta ends with something else. (Insert bad “vowel movement” joke here.) My point is, this could be a very long, if not tedious, answer. I will, however, spare your readers a rather thorough and well considered response and simply suggest glass to mouth as an adventurous alternative. 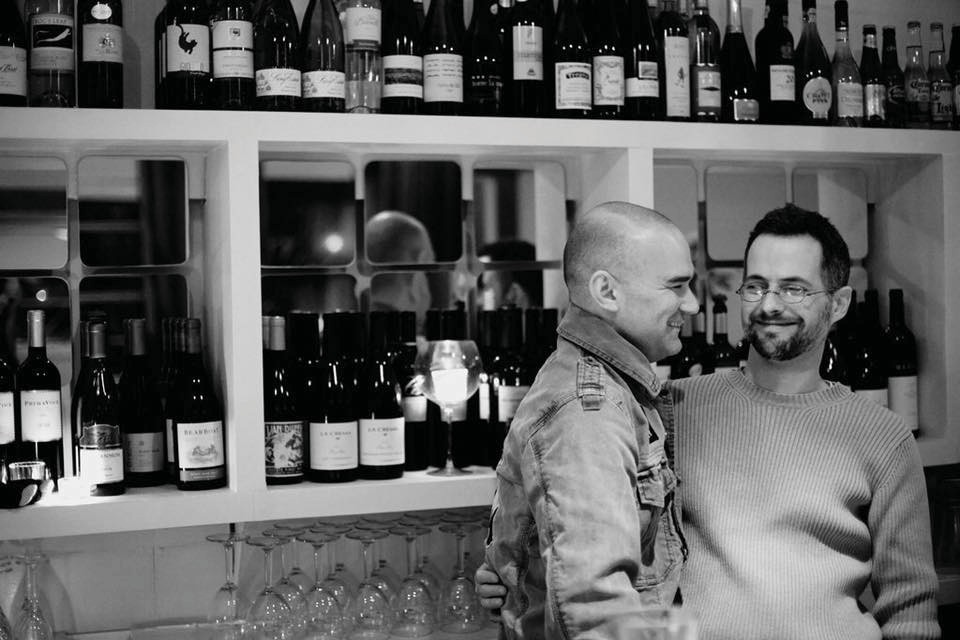 KA: Was Julia Child or the works of Sigmund Freud more influential on your earliest culinary creations?

RSF: I’d have to say Freud. I was exposed to Freud at a very Jung age and it involved not time travel, but astral projection. Quid pro quo, Clarice. You will let me know when those lambs stop screaming, won’t you?

KA: Did your dark humor hinder your chances of becoming involved with the military as a young adult?

RSF: No. I’m proud to confess I’ve been involved actively with all branches of the military on numerous occasions.

KA: Is a hot dog considered a sandwich?

RSF: During my years riding the rails with a traveling circus, entertaining Okies, and occasionally grifting the simple folk of the plains out of corn cob teeth during the Dust Bowl, I frequently stole foods and racist jokes from a hobo named Boxcar BJ. Never did I hear him yell, “Hey, that boy stole my sandwich!” when I absconded with a hot dog on a bun. “That boy stole my hot dog!” he’d holler. And sometimes, “Wait! What? You’re how old?” Never “sandwich.” That’s science. The kind you can only get in the school of life. 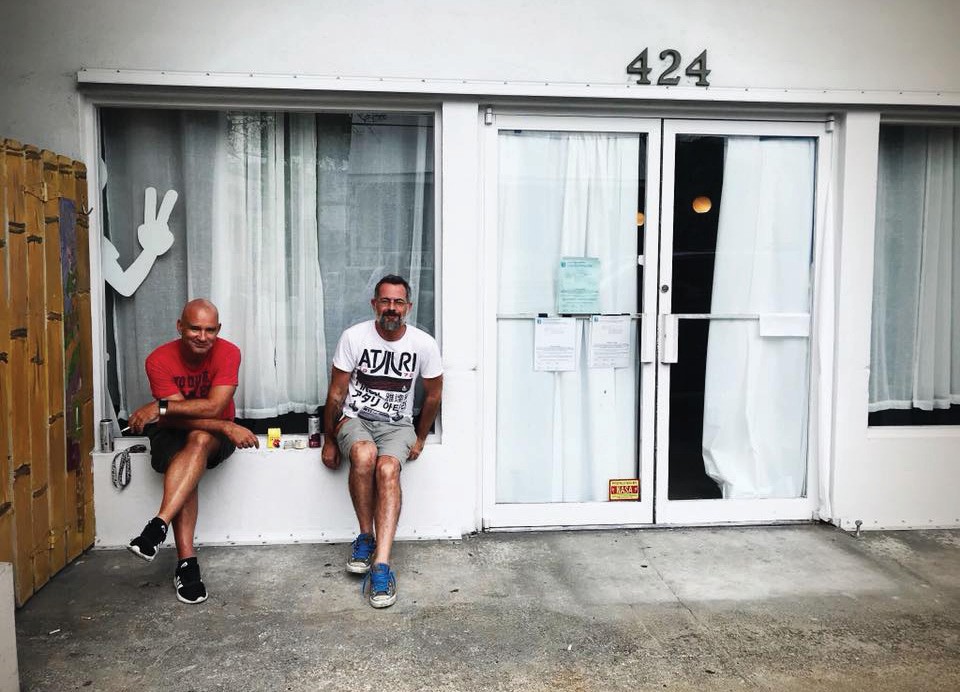 Scot and Fred pose in front of their restaurant, the Flaming Buoy Filet Co.

KA: What did your parents do professionally?

RSF: My mom is a recently retired teacher of learning disabled and behavioral disorder children. My dad, a geologist.

KA: Did you ever fixate on how much the inside of a geode looked like crystalized sugar?

RSF: Geodes were magical to me. My favorites were the ones that were never cracked open. They were dragon eggs waiting to hatch.

KA: Were your parents believers in having dinner together every night?

RSF: We very nearly ate dinner together every night. No TV. But, like a lot of kids during the ’80s, there was a time my brother and I ate at our leisure. It was during this time that I learned to cook.

KA: What was your first successfully prepared meal?

RSF: I don’t remember my first, but I remember my favorite: BBQ ribs. The recipe was my grandmother’s. I would call her on the phone after school and she would walk me through the directions.

KA: How did Key West get on your radar? Did the queers have anything to do with it?

RSF: My straight friendly best friend from Cincinnati used to visit Key West. One year he left for vacation and never came back. Naturally, I got to visit. (Pause.) I just realized that answer sounds like my friend disappeared while in Florida. I want to be clear. It’s true. KA: Where was he found? RSF: Atlantic Shores.

KA: Was that where you found your husband, Fred?

RSF: No. I’ve known Fred for almost 30 years. We met in Cincinnati and moved together to Key West. I did find a lot of other husbands at Atlantic Shores, however.

KA: How did the concept for The Flaming Buoy Filet Co. arise? Can you clear up the pronunciation of “Buoy?”

RSF: A brazen display of audacity. And by “audacity,” I mean hubris, overweening pride. We pronounce it “booie,” but Webster’s says “boy” is acceptable if you don’t know any better.

KA: You and Fred were aware of the probability of failure in the restaurant business. What pushed you over the edge to do it anyway?

RSF: We were blissfully unaware. It wasn’t until after we were up and running that friends and family told us that opening a new restaurant was the worst idea ever. That and snitching on the same cell mate that taught you how to make shivs out of toothbrushes in the yard. And we were, like, “What!? You’re (telling) us this now?”

KA: How did you choose to divide responsibilities for the restaurant? You’ve particularly taken on the role of being the face of it.

KA: How long were you at your former Packer Street location?

RSF: A month shy of nine years. The Flaming Buoy Filet Co. (made) ten years (last) Oct. 23. Without a sufficient amount of wine, I consider it inappropriate to divulge the sordid details that prompted our move, as we were involved by proxy only. Collateral damage, as it were. They know who they are and what they did. Our first choice was definitely not to move. We loved the neighborhood and the many people who were supportive of us from the start, and, gratefully, are yet. We ultimately made a decision that was in our best interest.

KA: What were some of the other locations you considered moving into? Was shuttering the restaurant permanently ever an option?

RSF: I feel like we looked at every available location on the island and then some, from run-down shacks to people handing us blueprints and asking us what we wanted. Closing permanently was never an option of ours.

KA: Why was the 424 Eaton St. location so attractive?

RSF: The blocks around where Eaton and Duval streets meet is this wonderfully vital cultural intersection unlike any other in downtown Key West. The Tropic Cinema is an absolute treasure for movie lovers. Few things are more essential to my well-being than the shared experience of watching a movie in a theater with a bunch of friends and strangers. The Studios of Key West’s support and showcasing of art, music and theater is indispensable. I failed on the stage of The Key West Theater. The same stage that hosted John Waters. I got to meet John Waters. In Key West. Think about that for a minute. I think he gave me the flu, but that’s another story. The Red Barn Theatre, too, is just a couple blocks from us. Having spent more than half my life in the book industry, Books & Books and Key West Island Books — my first job in Key West — hold very special places in my heart. I beg all of you, please read a book! Uva Wine Shoppe on Fleming is the closest place Key West has to a salon. The most multifaceted collection of local characters can always be found perched in front of — and behind — the bar. Opining while wining, they are. We’ve shared a great relationship with The Saint and Banyan Tree Resort for many years. And then there’s Wendy’s. Keeping it real. Eaton Street felt familiar. It felt right.

KA: Did you send a bill to John Waters for that bout of viral plague?

RSF: Of course not. He warned me not to touch him, but I couldn’t resist.

KA: What are the growing pains of your success at Eaton?

RSF: Besides growing hair in strange new places? I don’t think we experienced growing pains. Certainly, navigating our new surroundings and how we needed to adapt functionally in the new space was a fun exercise in trial and terror. And let’s not get ahead of ourselves on that success thing. Are you trying to curse us?

KA: You’ve gained notoriety for responding to critical reviews of the restaurant you deem inaccurate. What were some of your latest orations?

RSF: I’ve only ever responded publicly to three critical reviews, and the last one was about five years ago. But, when fact becomes legend, right? KA: What will your legend be? RSF: That’s not really up to me.

KA: How would you want to be remembered?

KA: Please, sir, you may now enter the casket.