If you didn’t know any better, all the laid-back tunes streaming from bars up and down Duval Street might make you think that Trop Rock was the official religion of the Florida Keys. And while we here in Key West are deliriously proud of the local indie singer-songwriter tradition (see our routinely sold out Songwriters Festival for direct evidence thereof), sometimes the brain craves a buzzing amp and some ear-splitting percussion to break the monotony. Well, move over Jimmy B. and the Coral Reefer Band — there’s a hardrocking sonic experiment in town and they’re … well, they’re a lot less mellow than what your average beach bum is used to.

Sure, musical ensembles spring up every other Tuesday in Key West, but this band’s name alone might give you some insight into what you’re in for. They call themselves

Parrothead Massacre (see what I mean?) and they promise no mercy for the music lovers who come “phlocking” to town hoping to catch the latest in local Trop Rock talent.

Parrothead Massacre’s bandanaed frontman is Mark Gambuzza, a Staten Island native with long locks, a thick New York accent and two arms full of well-designed tattoos — not exactly your typical Key West denizen, but then again Parrothead Massacre isn’t your typical Key West band. Gambuzza owns Uva Wine Shoppe, one of the island’s premier destinations for discerning wine drinkers, minus the pretention that usually goes along with connoisseurship and plus a deep appreciation of the finest and rarest vintages.

Gambuzza’s bandmates are a veritable motley crew of professionals with serious musical side gig inclinations. Will Shepler, the drummer whose driving rhythms you’ll be head-banging to all night, is an accomplished architect whose distinct stylistic stamp can be seen on commercial buildings across Key West. Bassist Ayden Phillips is an insurance broker by day, where I’m sure the music piped over the office speakers probably sounds a lot more like the reggae-tinged tunes we’re all subjected to on the local radio waves. And Clint Moore, the guitarist shredding and riffing his way through the heavy metal canon, spends his days playing the role of Capt. Clint Moore, purveyor of eco-tours and snorkel trips through the stunning backcountry of the waters surrounding the Florida Keys. 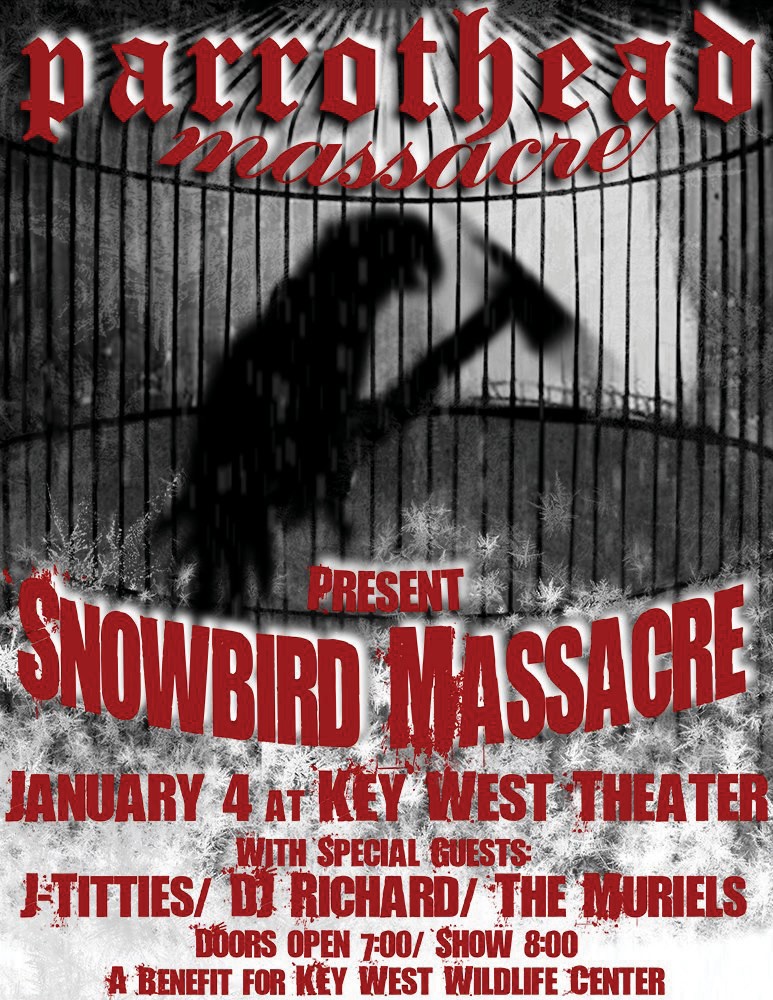 Oh, and their mascot? A 6-foot-tall blowup penis. Does he have a name, you ask? Of course he does — every anthropomorphized phallus deserves a unique moniker. This particular “member” of the band goes by Jimmy B. (If you have to ask what the “B” stands for, take a short scroll back up to the first paragraph. We’ll wait.)

“I met Will about nine years ago,” Gambuzza says. “In his former life, Will played in a pretty famous band called Agnostic Front up in New York. They were like the godfathers of the New York hardcore music scene. At some point in time, we had mutual friends and I used to rehearse with my band at a studio in the same building where Will and his friends would rehearse. We casually knew each other up north and then a few years ago we met up again down here. Will and I came up with the idea of starting the band after many discussions of how much the music scene in the Keys can be one-directional, especially on Duval Street. We both obviously lean toward the dark side of the musical spectrum, hence the name Parrothead Massacre. It’s a tongue-in-cheek way to poke fun at the typical singer-songwriter acts down here, but of course it goes without saying that we respect everyone in the industry.”

Parrothead Massacre made their Key West debut in the summer of 2017 at the Key West Theater’s Summer Smackdown, where they took the grand prize for best local act. The night featured artists of all media, but the foursome were definitely a shakeup to the usually subdued performing arts scene. “The Summer Smackdown was a great event, but that night we realized that when we play, we need to get people to understand that they need to let their hair down for the night,” Gambuzza states.

That realization inspired the band to collaborate with Comedy Key West on two years’ worth of Stand Up & Scream, with Comedy Key West’s homegrown comedians breaking the ice with laughter before Parrothead Massacre could break the sonic barrier. After Hurricane Irma ravaged the Florida Keys, Stand Up & Scream raised money for those impacted by the storm while providing big laughs and a little musical catharsis.

Stand Up & Scream was such a success in 2017 that Parrothead Massacre and Comedy Key West joined forces again last year, this time to raise money for the local Boys & Girls Club. “Between the comedians and the band, it was funny and high energy and just something different than what we usually see around town,” Gambuzza says. “So we decided to run with the idea let’s keep playing shows and raising money for local organizations.”

Perhaps fittingly, given their pseudo-avian-inspired band name, this year’s charity of choice for Parrothead Massacre’s once-yearly performance is the Key West Wildlife Center. This Saturday, Jan. 4, Parrothead Massacre presents Snowbird Massacre at The Key West Theater (512 Eaton St.), which will raise much-needed funds for the Wildlife Center, whose mission is to “ensure the future of our diverse native wildlife by providing timely rescues and quality rehabilitation with the hope of release back to the wild.” The organization takes in sick, injured and orphaned wildlife, rehabilitates them and then returns them to their natural habitat.

Savannah comedian J-Titties will open the show, followed by DJ Richard and the legendary Key West trio The Muriels, who describe themselves as “shameless exhibitionists,” adding a campy, lip sync-ed note to an otherwise heavy metal affair. Susan Campbell, Scott McCarthy and Danielle Martin, better known as the Muriels, have go-go danced their way through Fantasy Fest campaigns and coronations, Pride Week parades and charity events all over town (or literally anywhere that will pay them in free booze). Though it may seem an odd combination, to Gambuzza, disco puff wig-clad lip syncers and the metal band are a perfect union.

“When Parrothead Massacre first started playing together, we quickly realized that we’re so different than most of the other bands here,” he says. “There are so many great musicians in the Keys, but sonically we’re so loud that it’s not a good match for us to play with most of the other acts in town. We don’t perform that often, so every time we do we try to make the show an event. Each of our shows should be special, so instead of subjecting the crowd to an evening of the same type of music all night, we want to have a night of entertainment — hence The Muriels, who are eccentrically funny.”

Parrothead Massacre’s heavy metal oeuvre includes covers of bands like Metallica, Nirvana, Red Hot Chili Peppers, Buck Cherry, Danzig and Black Sabbath. The band realizes that all of that darkness, however, necessitates a little light. “The Muriels are made up of a butch drag queen and two mature ladies in go-go outfits and oversized sunglasses,” Gambuzza laughs. “We just want to make this a fun, entertaining night out and raise a few bucks for a charitable cause we believe in. And we’re not taking any of this (beep) too seriously — we hear that bar sales are noticeably great whenever we play.”

For Gambuzza, Parrothead Massacre is just a natural way to maintain his individuality in an increasingly homogenous musical world. “I’ve always been an appreciator of music that pissed my parents off,” he laughs. “And part of this is very cathartic for me. When I was a teenager, this was the music that your parents told you wouldn’t be around in five years. Now 30-plus years later, the two biggest tours of the last year were Guns ‘n Roses and Metallica, so I guess they were wrong.”

Parrothead Massacre is also committed to our informal island-wide mission to keep Key West weird. “We want to be part of a movement that shows people that this eclectic place should be eclectic once again,” Gambuzza states. “People are starving for new venues and new types of entertainment and we want to be at the forefront of that new direction in the arts. And with this show, I’m sure we’re the first band remotely in our genre to play at The Studios, so we just had to break that barrier.”

Snowbird Massacre starts at 8 p.m. at The Key West Theater on Saturday, Jan. 4. Tickets are $25 and are available at the Key West Theater box office at 512 Eaton St. and online at www.thekeywesttheater.com. And it goes without saying, but though the show benefits the fauna of the Florida Keys, the event is strictly for an adult crowd, so leave the products of your four-legged foxtrot at home. ¦