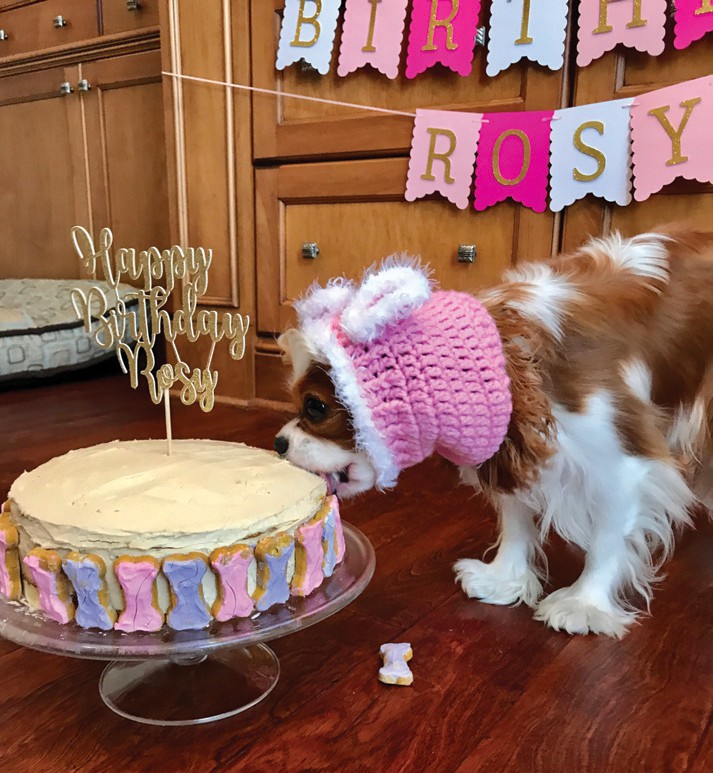 Rosy is a 1-year-old Cavalier King Charles Spaniel who lives in Central Florida with her parents and brother. She can be found modeling on Instagram @rosythecavalier. Rosy’s essay is titled “Life is on Paws.” COURTESY PHOTO

“This is all a stark reminder that we never know when the ‘last’ time will be. I think we are all, as a global world, learning that it is not enough to ‘live in the now.’ You have to live as if today is the last chance you’ll have to say what you mean and do what you dream. We, more than ever before, are learning that the chance to say it and do it ‘tomorrow’ is not guaranteed. Because you just never know.”

The book began as an offhand comment. A joke, really.

Though said in jest, the idea stayed with her.

“I meant it as a joke,” Ms. Pedersen says. “But I thought about it afterwards: why couldn’t we produce a book and call it ‘Pandemic in Paradise’? I did have extra time on my hands on weekends and weeknights. People were saying, ‘My freedom has been taken away because I can’t go to a restaurant or a bar.’ You are free to be creative and learn a new skill, and all do kinds of stuff!”

So she and historian Janet Naughton, with whom she’d collaborated on previous books, put a call out to authors and artists in Florida.

“We were looking for an essay on how (the pandemic’s) affected them, or a photograph that somehow represented the coronavirus to them, or a piece of artwork they had produced, or a poem they had written.”

They received approximately 80 submissions, from people from various professions: teaching, nursing, the arts, landscaping and small businesses, as well as the unemployed and the retired.

They chose 60 of them for “Pandemic in Paradise: Florida Stories from the 2020 Coronavirus Pandemic.”

The essays and artwork are divided into eight sections: home and life in quarantine, work and pandemic, creativity and ingenuity, reflection of time, global perspective, nature and animals in COVID-19, historical perspective and faith and inspiration.

“We picked what we thought was the best representation of what we got,” Ms. Pedersen says.

The book, published by Palmango Press, was released in August. It is available through its website, www.palmango.com or through Amazon.

Money raised from sale of the book will go to the Florida Nurses Association, to help nurses affected by COVID- 19. In the first three weeks, it’s earned more than $750.

The contributors range in age: the youngest is 6½, and the oldest, who wrote about what it’s like to live in an assisted living facility during the pandemic, is 92.

“I’m an historian,” says Ms. Naughton. “I knew that this was something that should be documented, so that in the future, people will know what we went through. Primary documents are really important to history.”

It was also vital to get the immediacy of the experiences and emotions, she says, explaining, “If I try to tell it to my grandchildren 10 years from now, the details would be different than what I told or wrote today.

“We wanted to get a good representation of younger people, teenagers, and older people. We tried to think about looking at it from different perspectives. As an historian, if you’re just looking at it from one person’s point of view, you’re getting a very narrow lens or viewpoint of something. The more people you include — and if you include diversity in age and gender, occupation — you’re getting various viewpoints. They all add to the story.

“We didn’t tell people what to write. That was the fun thing to see, what actually transpired, (what came in.)”

Both co-editors, Ms. Pedersen and Ms. Naughton, contributed multiple pieces. Ms. Naughton wrote about riding her bike with her husband during the pandemic, and about the re-emergence of wildlife, including seeing dolphins in the Intracoastal Waterway.

Ms. Pedersen wrote about rediscovering the joys of baking and sewing, as well as a humorous piece about her late mother, who, having survived World War II, knew that in times of crisis, there will be toilet paper shortages, though her daughter scoffed.

She also submitted a funny essay on the pandemic told from the point of view of her three cats, Rudi, Twisty and Peeps.

Another contributor, a Cavalier named Rosy, told of the pandemic from her puppy-point-of-view.

But while some are whimsical, others are serious.

Darlene Edie Dempsey, a registered nurse from West Palm Beach, wrote about what it was like to work in the epicenter of the pandemic in the U.S., and how the medical personnel didn’t have enough masks, gloves, gowns or other protective equipment.

And Karen Yvonne Hamilton, who teaches English to juniors and seniors at Port St. Lucie High School, wrote about dealing the many changes COVID-19 brought.

“I wrote about the new normal,” she says. “Everyone was talking about ‘the new normal,’ and people didn’t like that term, they wanted to go back to normal.

“A very large part of the population is trying to get back to the old normal. It’s not going to happen. Not for a very long time. Not ever, I think. We’re experiencing history here, something brand new that people are going to be talking about for a long time.”

She writes about writing “Welcome back!” on her whiteboard when Spring Break began, in anticipation of her students returning a week later. They never did.

“I had seniors; I didn’t realize I would never say goodbye to them and that things were not going to be normal for a while,” she says.

Now that a new school year’s begun, she’s teaching virtual classes. She’s in the classroom, but her students are at home.

“Whatever comes out the other end (of all this) is going to be new, and that’s going to be the new normal,” Ms. Hamilton says.

“I tried to end my essay on a positive note. Changes happen in history in all the time. And the first thing is: we need to accept it. It’s a grieving process. (We have to) grieve the loss of the way our lives used to be. Many people don’t want to deal with grieving, they don’t want to let it go.

“I say to my students, ‘The first thing is to accept that this is what we’re doing now.’

“We learn new ways of coping, new ways of getting through it, so we come out the other end, into the new normal.” ¦