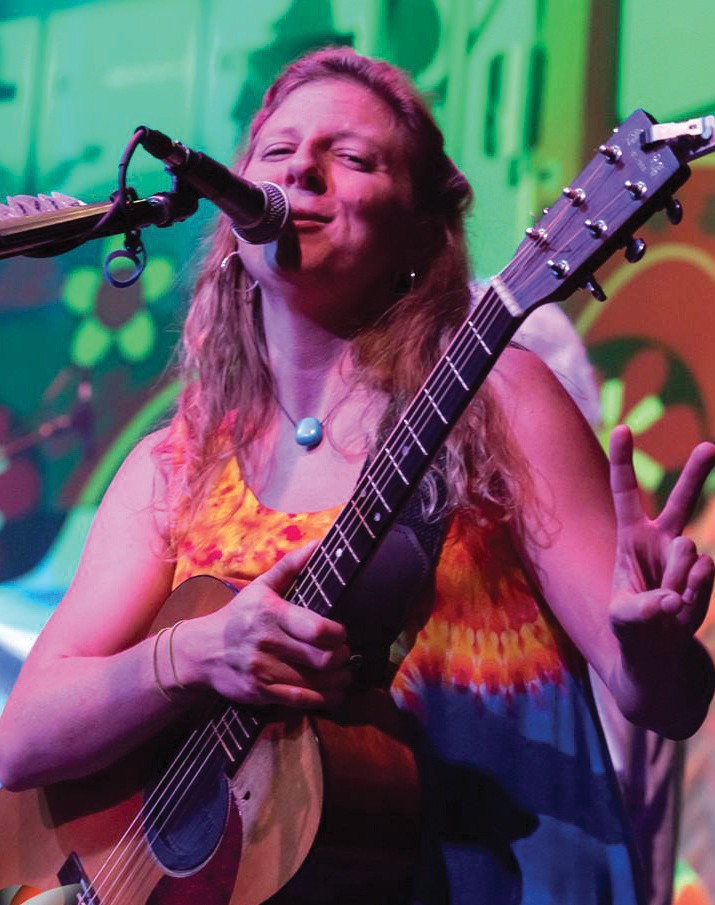 And before you ask about the last name, no. No relation.

When Emily talks about her music, you get the feeling it’s not the driver, but the vehicle. “I fell into playing music. I didn’t intentionally choose it as a career,” she said. “I use it because I feel a social responsibility. I have a sensitivity to environmental and sustainable living issues.”

With a work background in ecological preservation and a degree in interdisciplinary humanities from Michigan State, Emily was inspired by respect for social consciousness and Mother Earth, which originally set her up for a career outreach case management. “I worked in horticulture. My two most influential jobs were three years growing native plants, and I helped start up the saltwater program at BaySail, a nonprofit Appledore tall ship company based in Bay City, Mich.”

She was hired in 2010 to come down to Fort Myers with the company and she worked there for a couple of years. During this time, she got her first taste of the Florida Keys.

“I visited Key West a couple of times. I loved the bougainvillea, the palm trees and the funky nature of the place.”

She was instrumental in gathering an anti-Monsanto protest in Key West on May 19 of this year, coinciding with World March Against Monsanto 2018. According to the World March Against Monsanto Key West Facebook page, the purpose of this annual global demonstration is, “to peacefully protest Monsanto corporation, genetically modified organisms (GMO foods and life forms), Monsanto’s right to patent genetically modified DNA and Monsanto’s chemical invasion of our food supply and planet.”

Emily grew up in a musical family. “We sang in the car and around the house,” she said. “Mom was in the community choir, and dad taught me the guitar.” She studied music throughout grade school, was self-taught on acoustic guitar and received group and private vocal training as an adult. From Billie Holiday to Bobbie Gentry, Emily embraced folk, rock, jazz, reggae, American roots and more.

“My influences were cross-genre. Anything I could get my hands on … world, folk, big band, oldies stations, classic rock, Dylan, The Beatles, the Grateful Dead … ”

And yet, when she arrived in Key West, music wasn’t a priority. She kept her hands in the dirt and her eye on the sea, working for the first year at Land Creations Landscaping. She also had a job at Sebago and later as a case worker for the Early Learning Coalition.

Then, a year after she first arrived, she began playing music. “I lived at Oceanside and was always playing with friends, like I used to do back home. My first gig was at Hogfish Bar.” She has now been performing steadily as a solo vocalist in the Lower Florida Keys since 2013, with a long list of accolades.

Emily has played at many festivals and events such as the Florida Keys Ocean Festival, Wharfstock at Schooner Wharf, Grateful Summer at Boondocks, and the Key West Musicians Festival at Smokin’ Tuna, to name a few. Highlights of this past year include participating in an Earth Day Jam with That Hippie Band — “It’s music from the Woodstock era,” she said — at the Key West Theater and performing at the artisan market for the Ocean Awareness Edition.

When she’s not onstage, Emily enjoys kayaking. “I’m concerned about the direction of my art and purpose. To be inspired by, and to protect, the environment and humanitarian issues. To listen and respect each other.” It’s not surprising that in 2008, while still in college, Emily studied in Mexico to learn Spanish because she was considering a career as a migrant worker advocate.

As far as her plans for the future? “I’m staunchly pro-sustainable energy conversion, and oppose big oil. I’m now motivated to work to prevent fracking in my hometown in Michigan, as well as the crusty old oil pipelines in the Great Lakes. I’ll also be continuing the annual march against genetically modified foods” she says.

What does Emily enjoy most about living and working in Key West? “The sunshine. The ocean. The horticultural splendor and interesting people.”

You can check out Emily, her music, and her message every Tuesday and Thursday at the Lighthouse Grill/Faro Blanco in Marathon from 6 to 9 p.m. She also holds regular appearances at Blue Waters Courtyard Marriott also in Marathon, Sugarloaf Lodge Tiki Bar and Pinchers here in Key West. You can find her full schedule on her website, www.emilyspringsteen.com. ¦

One response to “MUSIC SCENE”