B-Man and mi-Shell: Happiness and music 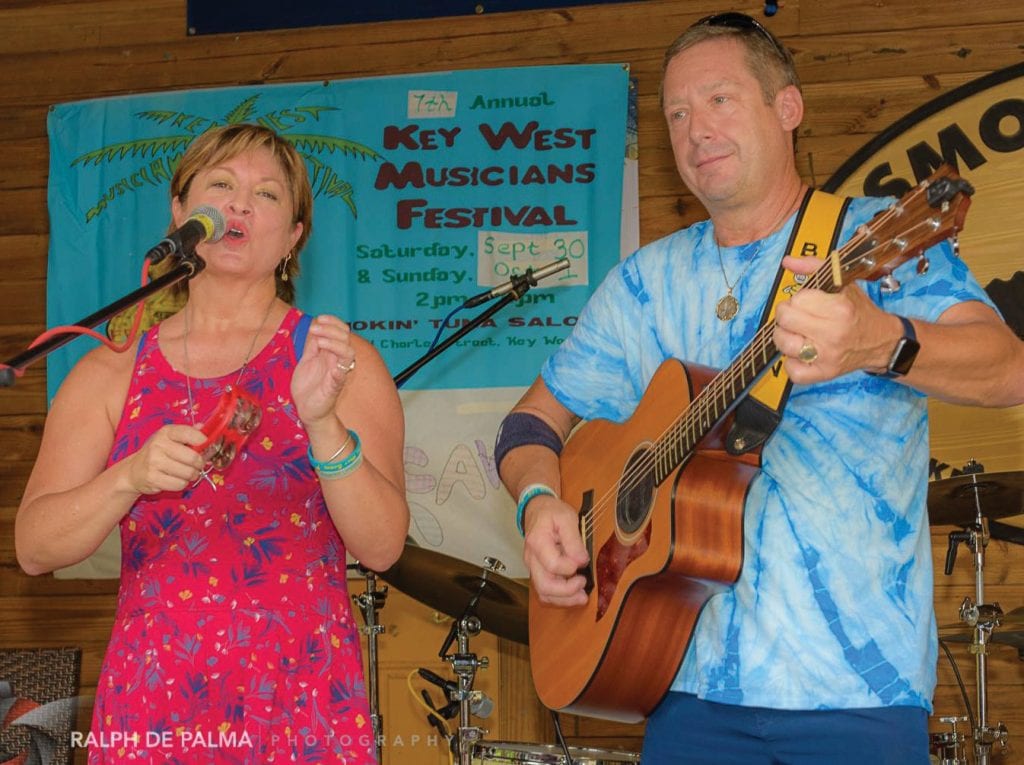 There is no band more dynamic or more intimate than a husband and wife duo. They spend half of their lives entertaining each other and spend the other half entertaining their audiences, together. They eat, snore, and get up on stage together and both sides of their relationship are dependent on the other, but Brian Fields and Michelle Tafoya make it look like it is just as much a part of their life as breathing. Their chemistry on and off stage looks perfectly natural, just like a proper rock n’ roll couple should, like Sonny and Cher or Johnny and June. Except it isn’t exactly straight forward rock n’ roll they are singing. It’s a genre called “trop-rock” with a mix of folk, country, classic rock and anything to fit the scene. Actually, they like to call it “Nautical Americana” and rightfully so. Trop-rock has a deceptive reputation for having only one type of sound to it. Their version does not. Brian and Michelle like to mix up their playlist with whatever mood the crowd is in. They aim to entertain everyone.

“Nautical Americana includes a variety of styles” Brian explains, “Come watch us and be surprised. We play it all, from Morrissey, to Bon Jovi and the Rolling Stones.”

For those who don’t know, trop-rock is the name for a style of music that is heavily influenced by island rhythms and often credited to Jimmy Buffet and his loyal following of Parrotheads. Which would make sense that there is still trop-rock included in their sets since Brian and Michelle first came to Key West because of the annual Meeting of the Minds festival which celebrated its 26th year in a row last year. However, they weren’t yet doing shows together at the time. That would come a few years after they got to know each other. In a world far away from this one.

The husband and wife to be met when they were both stationed in South Korea. It is where they first started performing karaoke and learning how to sing with each other. They continued their romance to Washington, D.C ., before going southwest to Albuquerque, New Mexico and eventually ending up on the island which they describe as a “juckanoo kind of town.”

Their musical story started when Brian, who had previously dabbled in bands including one called the Garage Boys, as the front man of B-Man and the MizzBeeHavens decided to add some female vocals to the group. Ever since then the two have been combining musical talents — him on guitar and vocals, and her on percussion and vocals, and are now known around town as B-Man and mi-Shell.

Michelle learned harmony from nuns as a child in Pueblo, Colo/. while Brian taught himself the guitar at the age of 13 as a kid in Ohio. They were both young when music made its impact on their lives and both strongly agree that it can be an important part of growing up.

“It upsets me when I hear that they are taking music programs away from schools,” Michelle says passionately.

“For some people music is their only option,” Brian adds, “and it teaches you math, literature and history. I had this amazing music teacher in the eighth grade who took music and went through the eras and into the ’60s when music first became interesting and artists were getting a message across. Music is a message.”

This past season Brian and Michelle played at a variety of venues around town including Smokin’ Tuna Saloon at 4 Charles St., Rum Row at 3824 N Roosevelt Blvd., Salty Angler at 1114 Duval St., and Viva Saloon at 903 Duval St. They currently play at Tiki House at 430 Greene St. and the American Legion on special occasions. However, with the slow season in full swing they haven’t lost momentum one bit between working on new music for their second album, producing their twice a month podcast specializing in fun things to do and where to eat in Key West, and broadcasting “Tuesday on the Island” where they “go around to different places on the Island doing a one-hour show performing songs by request.”

“We opened a music business here called Beechy Shell Music where we help musicians with lodging, instruments when needed and anything else that might come up,” Brian tells me. “Last year we were asked to join the Key West Songwriters Festival for the first time. Very honored to be included in that, especially after the hurricane.”

When asked why they decided on this island in the first place, Brian says, “We always came for the music, a place that is a home, but also somewhere tropical where we could rock it out on stage and be happy and in love along the way.” ¦