... kicks down the doors for round 2
BY LAURA RICHARDSON
laura.richardson@FloridaWeekly.com

I F YOUR MUSIC KNOWLEDGE is limited to the autotuned rubbish streamed on your local airwaves, chances are you’ve never heard of Red Dirt music. Born in Stillwater, Okla. and so named for the color of the soil found there, Red Dirt is a rebellious, boot stompin’, guitar pickin’, impossible to define mix of blues, folk, country, rock, bluegrass and honky tonk that defies any strict classification. Though its winding roots appear to stretch back to the ’70s, Red Dirt didn’t gain traction as a specific genre until the 2000s but its foothold in the Americana music scene is already strong. And through Saturday, Feb. 2, Key West will get boots-deep in Red Dirt during the second annual Mile 0 Fest, a four-day festival featuring 60-plus artists playing more than 100 shows on ten different stages across town — including the Truman Waterfront Park Amphitheater.

The return of the expertly produced Mile 0 Fest is primarily thanks to the imagination of Red Dirt enthusiast Kyle Carter and his small yet absurdly qualified team of marketers, organizers and executers. Born and raised in Yukon, Okla. (“the home of Garth Brooks,” he announces proudly), Carter is an impressively bearded giant of a man, both in stature and in presence. His enthusiasm and energy are like a tornado — get out of the way, or he’ll suck you right in. Lucky for Red Dirt fans everywhere, Cyclone Carter hit land in Key West and he brought all his passion with him. 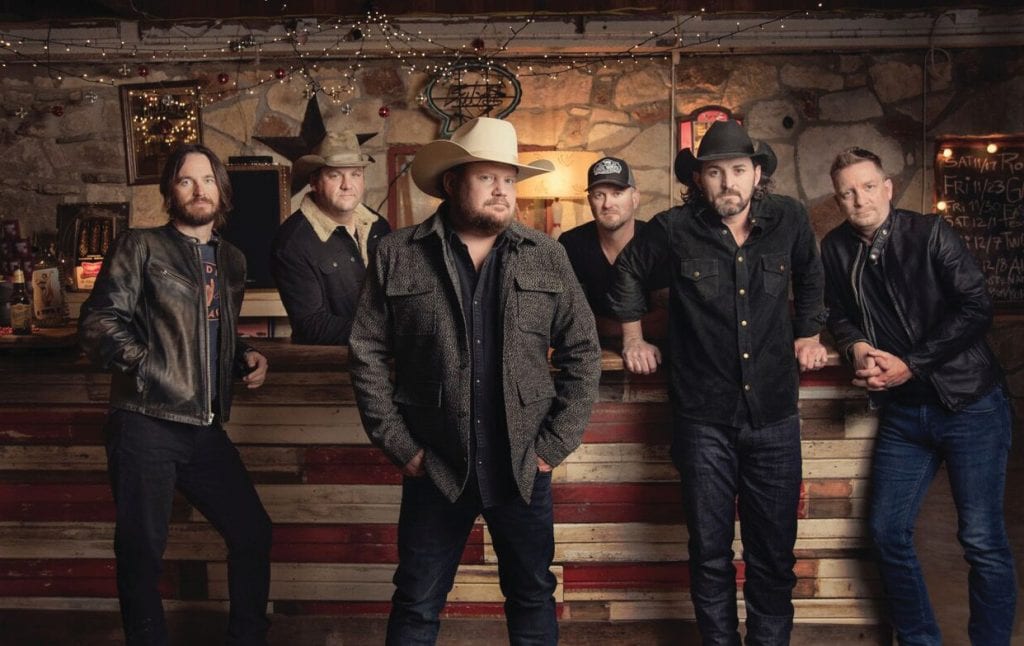 “I’ve worked in and around music my whole life,” Carter says. “I played in bands from my teens through the time of getting married and pregnant at the young age of 22. I always had a dream to come back to it, knowing it would potentially be tough to support a family but I knew I wanted to be involved with music somehow. After taking a very long hiatus from making music, I started a song swap called Sunday Night Revival where I was able to reconnect with a lot of the guys I had known for years in the burgeoning Red Dirt/Americana scene. This particular genre is our baby. It’s what I know and love best because it’s what I’ve been exposed to my whole life.” 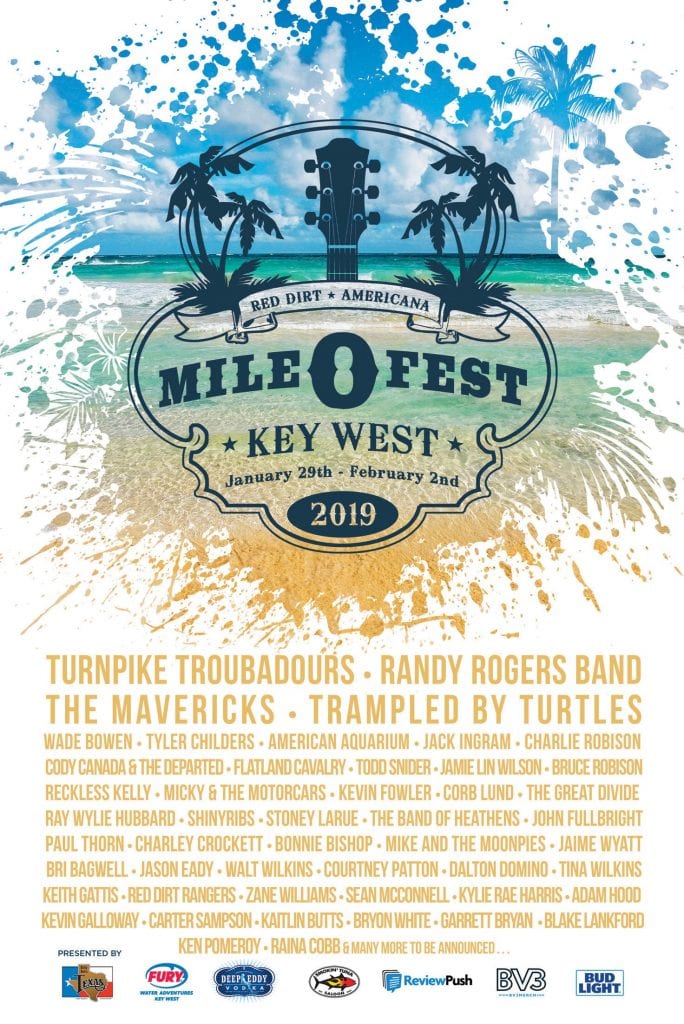 So how did an Oklahoma boy with deep regional roots manage to find himself building a brand at the end of the road? “I discovered Key West a handful of years ago and in my bones I just thought this would be a fantastic place to grow the Red Dirt scene into,” Carter explains. “On one fortuitous trip to Key West, I happened to meet some pretty important people, like (owner of Smokin’ Tuna) Charlie Bauer. At the same time, I found out that Key West had approved building the amphitheater at the Truman Waterfront. Up until that point, I was stumped — if I wanted to create something huge in Key West, where the hell could we have the big party? The amphitheater was the answer I had been looking for.”

In a way, the origins of Mile 0 Fest and the Truman Waterfront Park Amphitheater are intertwined — Mile 0 Fest was the very first multi-day event hosted in the open-air venue. “We’re thrilled that we were the very first commercial event at the amphitheater and we’re very proud of what we’ve accomplished,” Carter remarks. “The city has got a gem on their hands and they should be extremely proud of what they accomplished. The positive feedback we received last year is a testament to the city officials who worked their asses off to get something like this pushed through. There will always be hiccups, but 10 years from now I can promise you that the amphitheater will be a huge component of bringing people to Key West. It’s not an if, but a when. And Mile 0 Fest will still be kicking.” 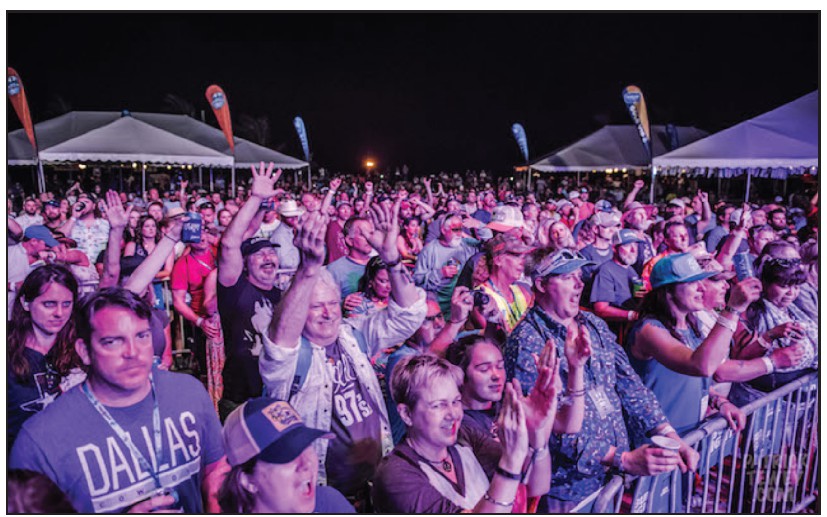 A shot of the crowd rocking out to Red Dirt at last year’s festival. MILE0FEST.COM

Although many of Mile 0 Fest’s artists aren’t necessarily in the mainstream, they’re definitely known in the Red Dirt community. In fact, many of the artists playing Mile 0 Fest — Bri Bagwell, the Randy Rogers Band, Jack Ingram and Jason Eady, to name a few — are either currently touring or imminently releasing their newest albums. Much like last year, many of the newer festival participants are unknown acts that are right on the cusp of greatness. What makes Mile 0 Fest so special is how outside the mainstream its artists reside and yet how fervently the Red Dirt fan base follows their every move. And though Key West has historically been a hub for live music (who hasn’t wasted away in Margaritaville at this point?), bringing a typically Southern style of music to the tropical Southeast — even with a deep and devoted fandom — was hardly a given for the festival’s organizers.

“At the outset, we honestly thought no one was going to buy a country music festival,” Carter admits. “We didn’t really expect to sell to the city of Key West or even to the state of Florida. As it turns out, we had more attendees from Florida than anywhere else (though Texas was close!). We were shocked! How did we sell so many tickets in a state where these bands don’t tour? It turns out Florida is home to so many ex-pat Texans who grew up on these bands. Then they moved here and they couldn’t see their favorite performers anymore. This festival truly belongs to the fans of this music who travel from every state in the U.S. With the exception of Alaska — Alaska, you are officially on notice. The majority of people traveling here come for a minimum of four to five nights, some stay an entire week and their attendance is a testament to their love of the product we’re producing.”

The immense success of the Mile 0 Fest (the festival is already well past sold out) is due to the collaboration between the festival’s coordinators and Key West itself. “The reason we pulled off such a successful event is thanks to our extremely small, extremely experienced team,” Carter says. “Between us all, we have over 100 years of festival experience. Couple that with the cooperation from everyone in the city — I could list 100 names of people I’ve met in the last two years that are responsible for our success.”

Carter and his team are effusive in their gratitude to the city of Key West — and their mission to give back to the community that has welcomed the festival with open arms. “Allowing us to utilize the amphitheater for Mile 0 benefits so many businesses in town,” he says. “Over the duration of the festival, we use stages at Smokin’ Tuna, Rick’s, Durty Harry’s, Irish Kevin’s, Sunset Pier, Southernmost House, Southernmost Beach Resort Café, Viva Saloon and Cowboy Bill’s. In addition, we’re doing a boatload of business with on-island companies. We’re buying all of our merchandise from local suppliers and we’ve got huge partnerships and great relationships with Fury, HydroThunder and the Key West Information Center. Our local connections have been a huge component of our success and we’ve been hyper cognizant of minimizing how many services we import. At every turn for everything our Mile 0 team can’t provide directly, the first consideration goes to an on-island enterprise.”

That gratitude extends beyond city officials and businesses to Key West’s residents as well. “I cannot thank our volunteer staff enough,” Carter says. “I will stand at the top of any tall outlook and scream the praises of the city of Key West and their large number of volunteers. The readily available, highly qualified, intelligent, experienced, passionate volunteer pool is incredible. We have hundreds of people saying they just want to be involved to see us be successful and that’s not lost on us not from the very get-go. We are extremely thankful for the reception that we’ve received — it’s incredible to have been welcomed with open arms at every turn. Now we are laser focused on executing a very well laid-out plan and having the experienced team in place to do it.”

The support of so many local establishments has enabled the festival’s organizers to schedule four full days of music with barely a minute to grab another Corona Light before you have to dash from one venue to the next — which, by the way, has been made far easier this year by Mile 0 Fest’s partnership with Historic Tours of America, whose dedicated trolleys will not only ferry people to the various venues, but will also reduce car and golf cart traffic in an already heavily congested time of year.

To the organizers of the Mile 0 Fest, becoming a part of the Key West family also means giving back to the community through two charity events — the Mile 0 Fest Fishing Derby on Friday, Feb. 1 and the Fury Charity Brunch Cruise with Mike & the Moonpies on Saturday, Feb. 2. Proceeds from both events go to three different charities, two of which are based in Key West — the Michelle Halpern Foundation and the Bahama Village Music Program (which will get the added benefit of hands-on sessions with some of the festival’s artists throughout the week). The third charity is the Red Dirt Relief Fund, which helps musicians pay medical bills.

“I like to think that our charitable conscience is a very big one,” Carter says. “We are so happy to give back to the Michelle Halpern Foundation because Michael Halpern has been so instrumental in helping us bring this monster to town. Of course the shows are important to us — because at some point in the future we will eventually turn a profit — but we understand it’s important to think bigger than ourselves. We’re very longterm focused. We haven’t come into town to make a quick buck; we came to build a sustainable future for not only our business but for the businesses and charities of Key West. Last year we raised $15,000 for charity and we hope that number is bigger this year.”

And in the long term, Carter aims to make Mile 0 Fest as much a part of the fabric of Key West as Key lime pie and Parrotheads. “I think that Key West should steal the moniker of ‘The Biggest Little City in the World’ from Reno, because it really is,” he laughs. “To have a 2×4 island to be this rich in culture, entertainment and community involvement is something special. From when we first started dealing with the city, everyone has said and done exactly what we talked about and, to me, that kind of honesty is in short supply these days. So our effort is to be just as honest in return. If we can build those kinds of relationships between our company and the city and everyone in it, we’re stoked about the long term potential about what we can do at the amphitheater. I got to see it from dirt to what it is today and what it is today to me is an incredible promise to the future of Key West to bring successful events and festivals to the city.”

Red Dirt is often associated with a devil-may-care, “break all the rules and make new rules just so we can break them again” attitude, but the Mile 0 Fest machine — from the organizers to the performers to the attendees — has been nothing but a positive, productive and respectful addition to Key West’s saturated lineup of festivals and concerts. With the Mile 0 Fest team’s dedication, their gratitude and their charitable conscience, it’s no surprise that the festival is already long sold out. Tickets for Mile 0 Fest 2020 will be on sale this weekend, so consider grabbing yours while you can.

You can buy tickets to Mile 0 Fest’s charitable events and check out the full lineup and schedule at www.Mile0Fest.com. ¦