MEETING of the MINDS

LAST WEEK WAS INTENSE. We doused ourselves in fake blood and pedaled to Duval Street, brutal head-winds be damned. We danced with tens of thousands of our new best friends until the wee hours (which totally counts as cardio, by the way). We donned tutus and togas and tighty whiteys as we bounced from party to party. We had more fun than a 2-year-old in a bounce house, but 10 straight days of partying can really take it out of you. Post-Fantasy Fest, most of us would love nothing more than to kick back by the pool with a frozen drink (paper umbrella included, natch) with nothing more than mellow tunes in the background. So perhaps it’s no coincidence that the week after Fantasy Fest is dedicated to Jimmy Buffett, the poster child of island living.

This year, the annual Meeting of the Minds — a five-day, Trop Rock-fueled festival that brings together Parrot Heads near and far — takes place Oct. 31-Nov. 4. For those of you who are a bit confused: If you’ve never been to Key West before and only know that Jimmy Buffett is some dude who really loves margaritas and blew out a flip flop that one time, Parrot Heads is the official moniker for lovers of all things Jimmy Buffet, including (and maybe especially) the island that inspired much of his music and probably more than a fair amount of his life philosophy. 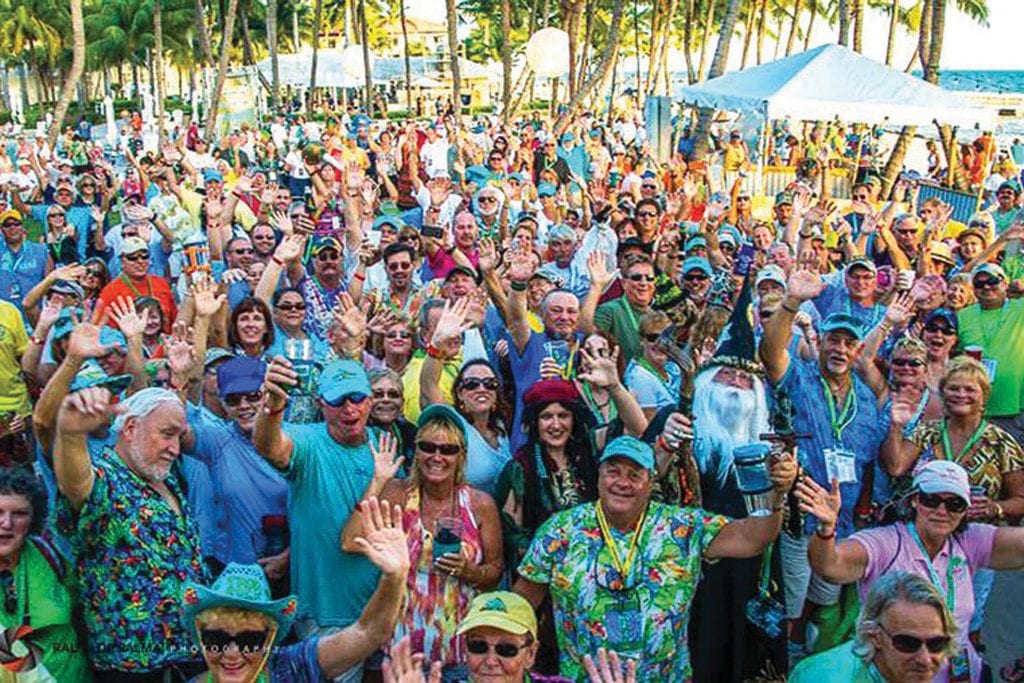 Above: Parrot Heads flock to the beach for the festivities. Left: Goody bags galore. COURTESY PHOTOS

If you dig deeper than the whole Jimmy Buffett thing, the Parrot Heads actually hold themselves out as an organization whose purpose is to “promote the international network of Parrot Head Clubs as a humanitarian group sharing information and social activities for mutual benefit.” They may love to wear Hawaiian shirts and drink the island dry of Corona Light, but the Parrot Heads also raise money and volunteer hundreds of thousands of hours towards community and environmental causes across the country. In fact, over the past 16 years, the group has raised $50.5 million and volunteered a staggering 4,013,000 hours. Hard to believe that a group of rum-swilling Trop Rockers could be so motivated to do so much, but the Parrot Heads’ Key Westworthy dedication to having a great time is only matched to their fervor for competitive fundraising.

If you’re scratching your head wondering why avian enthusiasts are so philanthropic, take note: Parrot Heads are fans of Jimmy Buffett, a musician best known for his Key West-steeped brand of folksy confessional “gulf and western” Caribbean surf-rock music, whose lyrics conjure images of a life spent sailing the open sea and making port just to replenish his stash of rum, ice and limes. The official Parrot Head canon quotes Buffett himself explaining the origin of his fan club’s name: 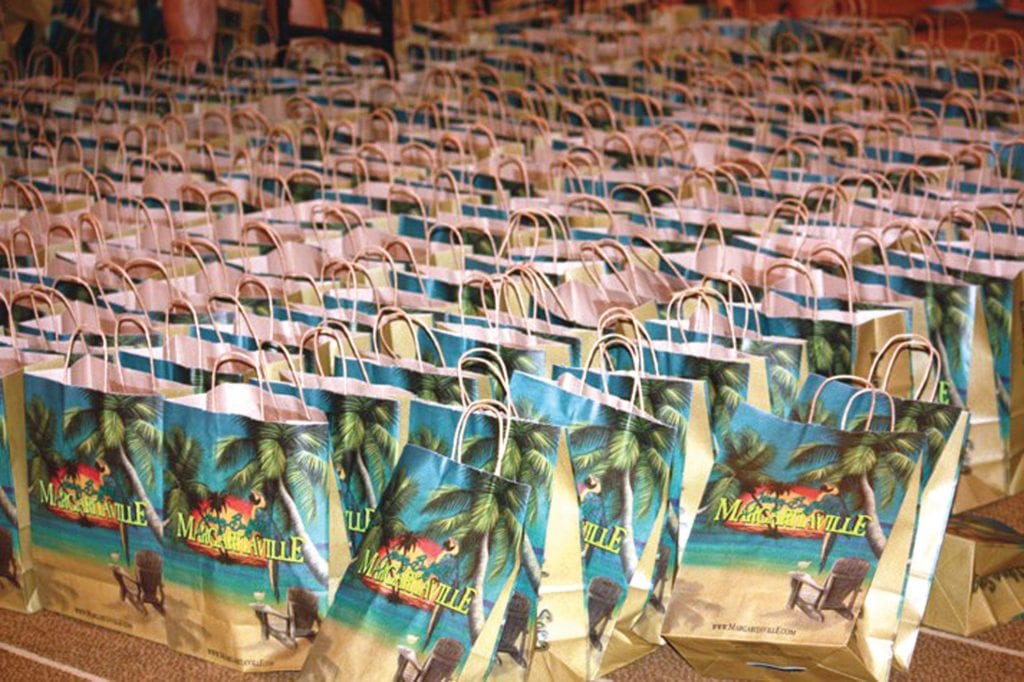 “Timothy B. Schmit was in the band, and we were playing a venue outside of Cincinnati called King’s Island. People had already started wearing Hawaiian shirts to our shows, but we looked out at this Cincinnati crowd, and they were glaringly brilliant to the point where it got our attention immediately. I said, ‘Look at that!’ Then Schmit says to me, ‘They look like deadheads in tropical suits. They’re like PARROT HEADS,’ he yelled to me in the middle of a song. I immediately took the term and threw it over the microphone — people (have) identified themselves with the term from the get- go.” 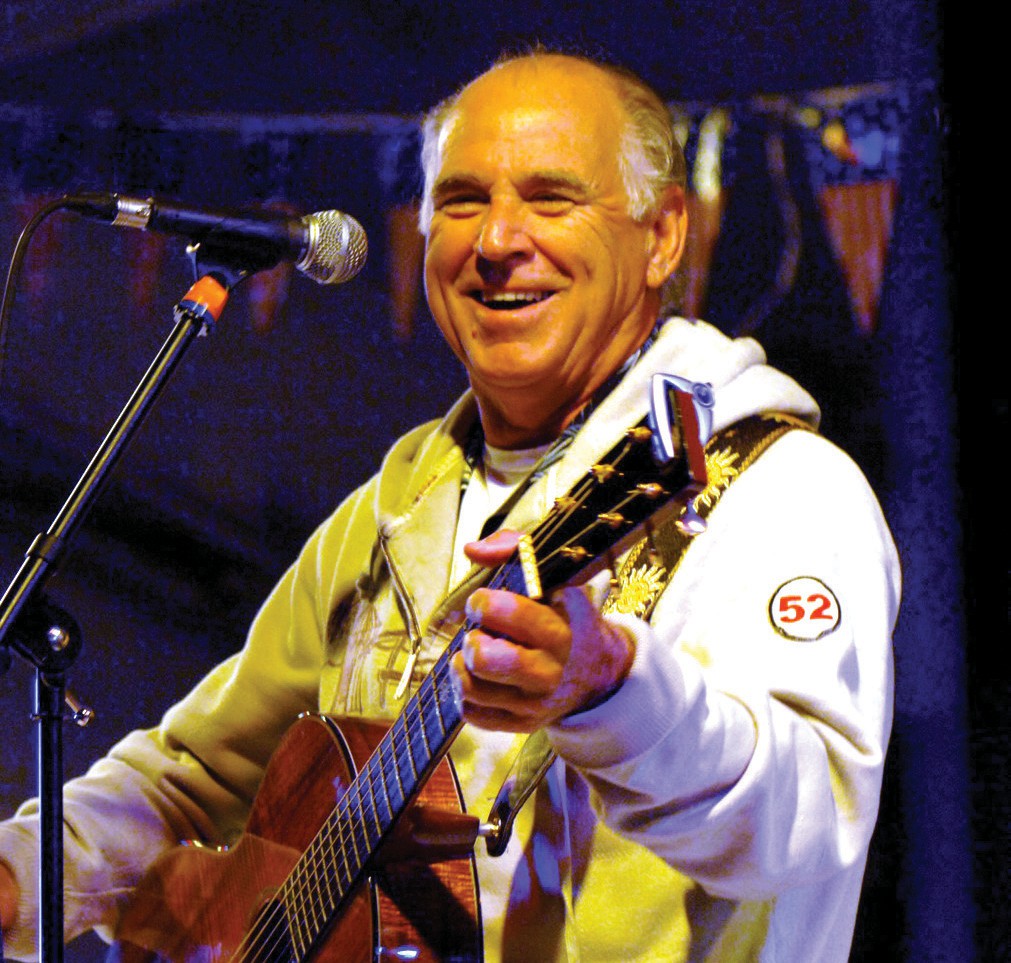 Jimmy Buffett’s music is the inspiration for the Meeeting of the Minds. COURTESY PHOTO

Like Deadheads, Parrot Heads are famous for their willingness to follow their leader from concert to concert, setting up elaborate tropical tailgating parties in the parking lots of whichever venue Buffett is playing that night. Heck, these fans are so organized and so dedicated that there’s even a documentary about their commitment to the man and the lifestyle. (Incidentally, “The Parrot Heads Documentary” had its very first national screening at 2016’s Meeting of the Minds, with two sold-out showings at the Key West Theater.) That a group best known for unloading dump trucks of sand outside concert arenas to create a beach in the middle of, say, Mobile, Al., are in actuality some of the most prolific charitable fundraisers to ever grace the beersoaked shores of Key West may come as a shock to some. Outside the Parrot Head community, the group has acquired a wild, party-centric reputation, one that assumes they are simply a colorful bunch of working-for-the-weekend types who live vicariously through Buffett’s Caribbean styled songs, which detail a life spent eating cheeseburgers in paradise, drinking margaritas and generally enjoying the kind of relaxed, beach-based life usually reserved for actors in Malibu rumcommercials. 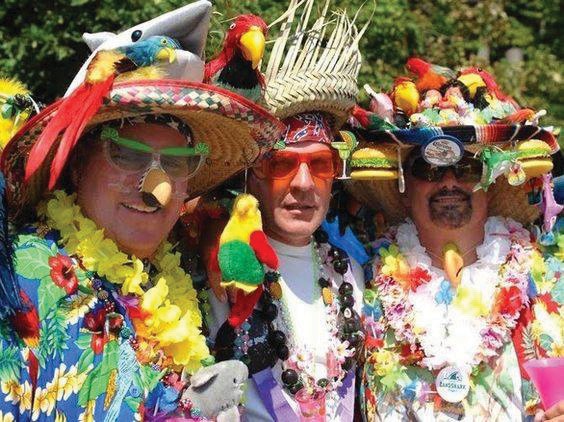 The Parrot Heads are renowned for their colorful costumes. COURTESY PHOTO

In the (very misguided) opinion of many people outside the community, Parrot Heads are dissatisfied people trapped in fluorescent-lighted cubicle office jobs who use Buffett’s music as a kind of escapism from the daily grind of their otherwise deeply un-tropical lives. And yet, while there is certainly an element of organized reverie to the Parrot Head community, the group — official nonprofit title: Parrot Heads in Paradise Inc. — exists to serve a much larger, more ambitious purpose: to advance the social issues of its international network of local Parrot Head chapters, membership to which requires participation in various charitable and educational activities meant to better each club’s respective community. In addition, the group’s Lone Palm Foundation awards grants to any Parrot Head members who have themselves experienced loss due to natural disasters.

Local chapters might choose a different charity or two to fundraise for each year, but the group’s true pièce de résistance is its annual meeting in Key West, the storied Meeting of the Minds. To attend, Parrot Heads must first be independently verified to be in good standing with their local club, which usually means a member has completed a certain amount of community service and charitable work annually. For their 2018 meet-up, this year’s Meeting of the Minds will take over the Casa Marina hotel Oct. 31-Nov. 4.

The event promises to be as raucous as it will be humanitarian. Attendees will continue the program’s 13-year reign as the largest blood drive in the Keys (last year, they collectively donated over 200 pints of blood) as well as participate in the annual Zonta Breast Cancer 5K run/ walk and maintain a decade’s worth of support for the Salvation Army of Monroe County by holding a children’s toy and school supply drive. On the revelry side of things, they’ll attend street festivals, Buffett memorabilia auctions, raffles and beach parties. Of course, the event is really about music appreciation and this year’s 30-band lineup will perform concerts spread across town, featuring big names like CMA Musician of the Year Mac McAnally, rising stars Brendan Mayer and Aaron Scherz and members of Buffett’s Coral Reefer Band, as well as a few yet-to-be-announced surprise performances.

When people hear “surprise performance,” they can’t help but hope one performer in particular might casually swing by, though there’s no word on whether the man himself will be making an appearance this year (not that there ever is — that man is as elusive as the Loch Ness Monster). Buffett has been known to gift his fans with last-minute performances (most recently in 2011 and 2015) though, of course, his extreme fame means event organizers must work around the clock to insure ample security is in place before his arrival.

This year’s staff of 132 security volunteers will work in tandem with local police to control crowds in case Buffett decides to stop by for a song or two. The whole thing takes thousands of hours to put together, a labor of love for Parrot Heads in Paradise Director of Conventions Andrew Talbert, who maintains the work is well worth it. “I get excited watching people get excited, surprising people, making people happy,” he explains. “I just love it.”

Talbert, who balances a fulltime job at Proctor and Gamble alongside the time consuming demands of planning such a massive event, doesn’t mince words. “I can’t tell you how many hours a year I spend on this event, but I can tell you that if I’m not thinking about it, I’m working on it, and that includes holidays — Christmas, Thanksgiving, you name it.”

Talbert, a lifetime music aficionado, is a true Buffett fan, first discovering his music as a teenager in rural Mississippi while Buffett was attending college nearby. “We thought he was just a local boy done good,” he jokes, estimating that since then, he’s seen Buffett in concert more than 100 times across the country.

This year’s event is shaping up to be the largest Meeting of the Minds yet, with more than 5,000 registered attendees, plus hundreds more who will simply show up to watch the free concerts in the street. (The event has been sold out to Parrot Heads for a while now, but many of the event’s concerts are performed in public spaces like the corner of Duval and Fleming streets — including when Buffett essentially shut down most of Duval during his impromptu concert there in 2011.)

“I’ve already been thinking about what we’re going to do for the next two years,” he laughs, as the discussion turns toward the longevity of the Parrot Head clan as a whole. After all, Buffett turns 72 in December, raising the question of just how long he will continue to tour extensively and what will happen to the Parrot Heads when he stops.

“We’ve still got a lot of new members coming in,” he says, “I keep getting emails from people who are brand new (to the event), and that makes me really happy.”

Apparently, though Buffett’s tour schedule has slowed considerably over the years, his fan base continues to grow.

The lure of his music — and the charitable movement it has inspired — is fated to carry on long after Buffett’s ascension to that paradisiacal Margaritaville in the sky … though Talbert isn’t too worried about the group losing its leader to retirement any time soon.

“Jimmy loves the limelight,” he says. “He loves performing. He won’t go away until he just can’t do it anymore.”

It’s late, and after an hour-long drive home from the office Talbert still hasn’t started packing for Key West. He’s got hundreds of emails to finish, secret performances to arrange, endless calls to make, a million tiny worries before his fellow flock descends upon Key West in their full colorful glory.

He sounds exhausted, with a 45-hour workweek ahead of him and no end in sight. But when he stops to explain why he chooses to devote so much of his spare time to ensuring that each Meeting of the Minds be as successful as possible, he could just as easily be describing the plight of every Parrot Head in every fluorescent lighted cubicle working toward the biggest weekend of their whole year:

“When you’re working your ass off in the middle of the night and you can’t hardly see straight, and your computer’s blitzing on you or some spreadsheet’s giving you a headache, you’re sitting there wondering, ‘Why do I do this?’ …

“and then you go down (to Key West) and you watch all this stuff happening, and you remember why you do it: because you walk away saying, ‘That was incredible.’”

And the most incredible part of it all is that underneath those Hawaiian shirts and despite their hard-partying reputation, the Parrot Heads are so much more than just music lovers who dream of an escape from the daily grind (honestly, don’t we all need an outlet sometimes?). They’re the definition of passion with a purpose (or, as they call it, “party with a purpose”).

And if that’s not the best way to live, then I challenge you to tell me what is.

For more information about the 2018 Meeting of the Minds or Parrot Heads in Paradise, visit www.phip.com. ¦ BY LAURA RICHARDSON