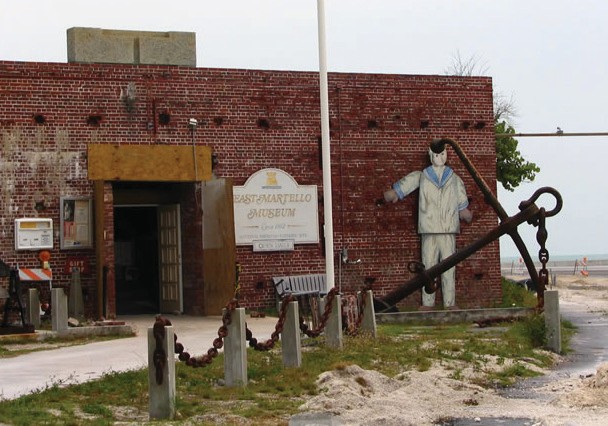 By the time the American Civil War began, Key West was primed to defend its coastal borders against those dastardly enemy ships sent from … the South.

Yes, despite its location at the very bottommost edge of the nation, the city’s massive coastal Navy fortress, Fort Zachary Taylor, had already been secured by Union forces as a vital stronghold, its location at the edge of the Gulf of Mexico and Florida Straits perfectly positioned to stop Confederate ships from coming ashore to aid the rest of their Floridian troops.

The construction of the massive (and massively unfinished) fort was first commissioned in 1836, after careful surveying by the American military showed the Key West harbor to be the ideal place for an armed, harbor-defending fortress. Like all construction projects, the original scale and cost of the proposal was staggering, calling for a total of nine stone forts spread across the island.

After much back-and-forth, angry letter writing and continued revision of architectural plans (all punctuated, one assumes, by a series of fists slammed dramatically onto table tops), it was decided that only one large gunned fort would be built, but that two smaller, advanced Martello towers would be erected at the East and West to assist in protecting the fort and the island’s borders.

The towers were to be identical: square citadels 36 feet in height, with thick outer walls and space for everything a small Army barracks might need inside, including cisterns for fresh water, kitchens, storage and sleeping areas. The architectural plans called for arched ceilings, relying on techniques first invented during the Roman Empire, which would strengthen the roof structure enough to support heavy artillery.

It was 16 years after the start of Fort Zach’s construction — three years into the Civil War — before ground was broken at the sites designated for the East and West batteries. As the war raged on, Key West remained the homeport of the Eastern Gulf Blockading Fleet, which guarded an estimated 300 captured vessels anchored in front of Fort Zachary Taylor. The area’s non-military citizens, however, were largely thought to be Confederate sympathizers, meaning efforts to complete the towers soldiered (slowly) onward thanks to heated tension between hired free construction workers, lent-out slaves, Army employees and the local public.

Progress was less than consistent, also hindered each summer by the widespread epidemic of yellow fever, and it wasn’t until 1864 that both towers were finally linked by railroad to the fort they had been designed to protect. A massive hurricane, which struck both sites with Kafkaesque precision just one year later, caused enormous devastation at both sites, throwing the operation into complete turmoil. After 1866, when the building of Fort Zachary Taylor was finally deemed complete, the towers remained under construction for almost a decade longer, until they were eventually abandoned; West Martello became a city quarry, while gun runners used the beautiful Romanesque architecture of East Martello as target practice, destroying its tower.

In 1885, U.S. President Grover Cleveland’s board of fortifications brought representatives from the Army, Navy and civilian population together and they recommended overhaul of the U.S. defense system. They recommended massive modernization of the country’s existing coastal and harbor fortifications.

The Martello towers, abandoned, unarmed, were once again relevant. While Fort Zachary Taylor saw the addition of 10 reinforced gun batteries, the Martello tower casements were filled, and steps to their gun mounts erected in cement. By the time the Spanish-American war began in 1898, the towers were ready to serve a variety of purposes. For the next 40-some years, West Martello in particular was used for radio stations and an anti-aircraft battery. World War II saw the addition of more batteries to Key West, though by the war’s end they — and the Martello Towers — were once again abandoned.

By 1949, both towers were in states of embarrassing decline. West Martello had been deemed an eyesore. County Commissioner Joe Allen was appalled at his city’s willingness to allow the two towers to be erased from the Key West’s historic cityscape.

Mr. Allen fought to preserve the sites as landmarks, eventually arranging a lease agreement between the county and the then-homeless Key West Garden Club, whose industrious nature made it the perfect fit to restore the west tower back to inhabitable conditions. Supported by donations from like-minded patriots, Garden Club members cleared away debris by hand and landscaped the property with lush tropical plantings.

In 1976, the site was officially declared a National Historic Site, granting it inclusion on the National Register of Historic Places. Rechristened the West Martello/ Joe Allen Garden Center, it remains free to the public, who may wander daily through its painstakingly planted paths, participate in annual plant shows and sales, host private after-hours events (the site is massively popular for weddings) and enjoy breathtaking views of the beach and ocean from the site’s uppermost gazebo covered point.

West Martello’s sister tower, East Martello, fared equally well, when, in 1950, the Key West Art & Historical Society, then museum-less, was granted permission by the Navy to begin restoration work on the tower in the aim of establishing it as a museum. The group gathered its own corps of volunteers and succeeded in restoring the site to open its first-ever museum on its premises.

In keeping with the society’s commitment to preserve the art and architecture of Key West’s past, the group spent years completing meticulous, rigorous preservation work in order to return the tower to its original design.

The tower’s impressive citadel and casements offer a close look at how the tower must have looked in its more glorious days, while modern security and climate control systems ensure the protection of its myriad artifacts and artworks. It is home to an outdoor sculpture garden, indoor exhibits dedicated to the various industries of Key West, preserved Civil War antiquities, folk art, a famously terrifying children’s doll, as well as routinely updated exhibits on the history of Key West and the tower’s past.

As recently as May, the group was gifted the entire life’s work of renowned Keys folk artist Stanley Papio. His sculptures, ranging in size and boasting often hilarious, thinly veiled titles, punctuate the cool bricked interior of the fort, intermingling with the museum’s other prized possessions, including an authentic hollowed out canoe made by the island’s indigenous Indians, and the aforementioned haunted doll, Robert, whose wall of desperate fan letters imploring him to forgive various transgressions is perhaps the most famous Key West symbol outside of the Southernmost Buoy.

The site is a popular stopover on local ghost tours, and in December played host to a raucous modern dance party. Together with its new sculpture collection, it is now one of the most diversely informative spaces on the island.

Though in the end, neither West nor East Martello saw combat, one could argue the towers’ most powerful work is being performed today, thanks to a community dedicated to preserving the integrity of Key West’s history, one brick at a time.

Both towers are open to the public, West Martello without a fee, East Martello for $10 with discounts available. ¦ 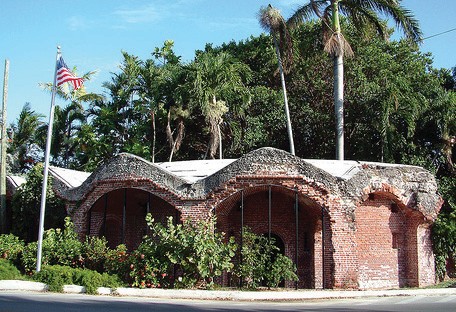