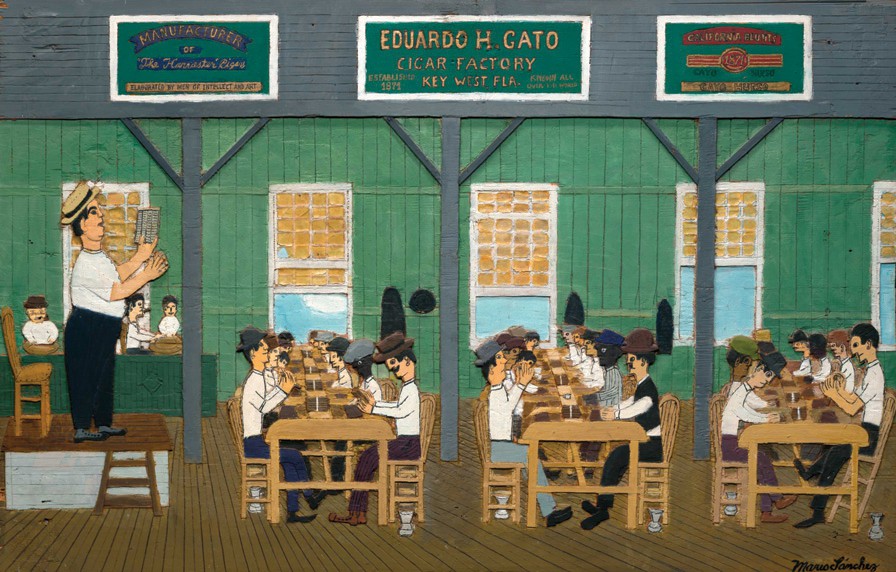 The Board of Regents of the Smithsonian Institution, which includes the chief justice of the Supreme Count and the vice president have approved the art of Mario Sanchez for the permanent collection of America’s museum. Chief Curator Virginia Mecklenburg of The Smithsonian American Art Museum received the large Mario Sanchez intaglio donated by the Edward B. and Joan T. Knight Foundation.

The Smithsonian, America’s museum, was founded in 1846 in order to develop an American national identity. The Smithsonian has become the world’s largest museum since its founding more than 170 years ago. Nance Frank of the Gallery on Green in Key West facilitated the donation which was enthusiastically received by the museum.

It is a great honor to be inducted into the permanent collection of SAAM. It was one of Mario Sanchez aspirations. The chief curator is considering, “Men of Art & Intellect” for the semi-permanent exhibit, “Experience America.”

At first glance, Mr. Sanchez’ work is charming folk art. However, delve into the tableau and Key West, an island that has embraced diversity for 150 years, and it becomes dramatically complex. The intaglio depicts Mr. Sanchez’s father reading to the cigar makers at the Eduardo H. Gato Cigar Factory. The factory employed 500 people of every color. Men and women, Bahamian, Americans, Cuban, Chinese, Jews and Italians are pictured sitting side-by-each. At the time, they were the best-paid workers in the U.S. and all were unionized. They chose what the reader would read to them in the afternoon. In the morning, it was the international newspaper hot of the ferry from Havana that the reader delivered without a microphone or any other device to the 500 workers.

Mario Sanchez’s work is on display at The Gallery on Greene, 606 Greene St., www.galleryongreene.com. ¦

One response to “Mario Sanchez, first Key West artist inducted into The Smithsonian”