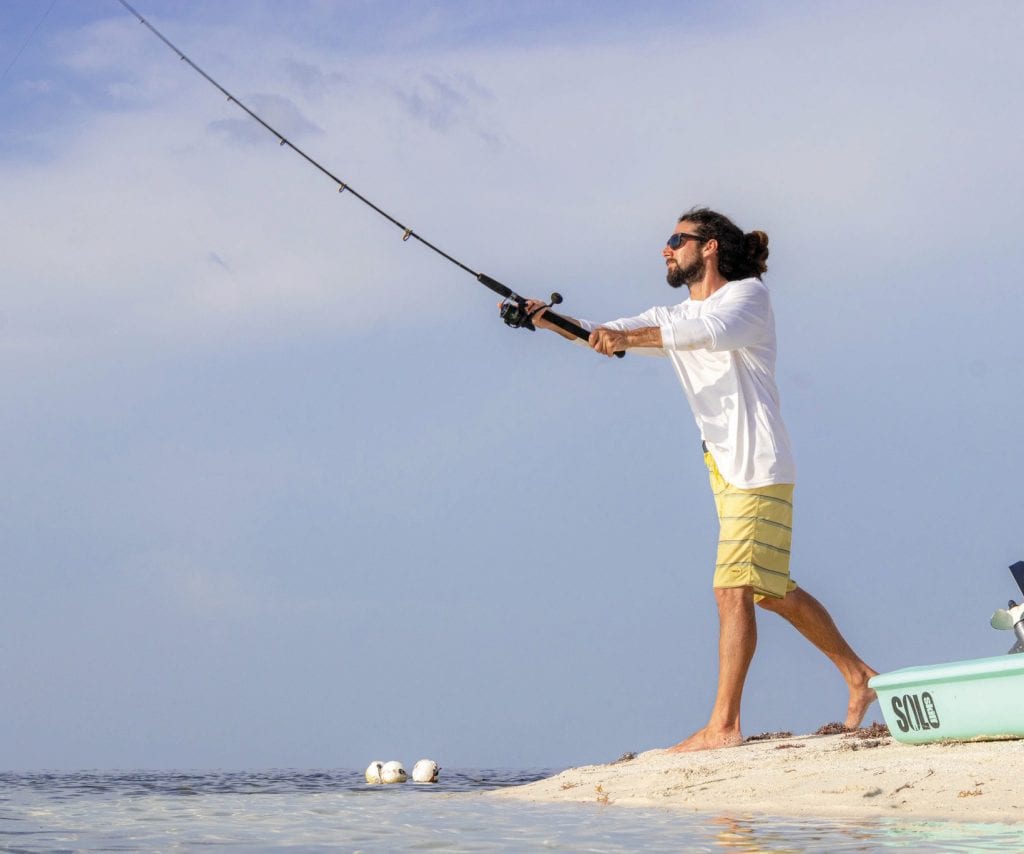 Above: Raymond Mellies on the beach doing some product testing. COURTESY PHOTOS

No one is as fly as Neil Mellies. The saltwater jigs and lure master has spent the last five years curating his custom jigs and lures brand, Kico’s. After spending a lifetime fishing on the waters of Key West, this fifth-generation Conch (for all you non-locals, a Conch is a term used to describe someone born and raised in Key West) learned quickly that the average fishing lure was just that — average. They would break, fray and come undone as soon as a fish got on. The hooks would bend and hair would come off easily. As you can imagine, this became troublesome for the local commercial and recreational fishermen whose bread and butter was catching fish.

It was one salty day on the water in 2014 when a local captain, Nick Schneider of Hit ‘Em Hard Charters, challenged Neil to create something better if he didn’t like what he was using. And that’s just what Neil did. After spending countless hours searching the depths of YouTube, Neil learned what products to buy and how to tie patterns, developing his own style and creating a brand all his own. Today, you can find Neil on his Stock Island turf, hand-making and powder coating the jigs he’s become known for. He makes trolling lures, grouper jigs, king fish jigs, 2x cut bait jigs and rigs, just to name a few. 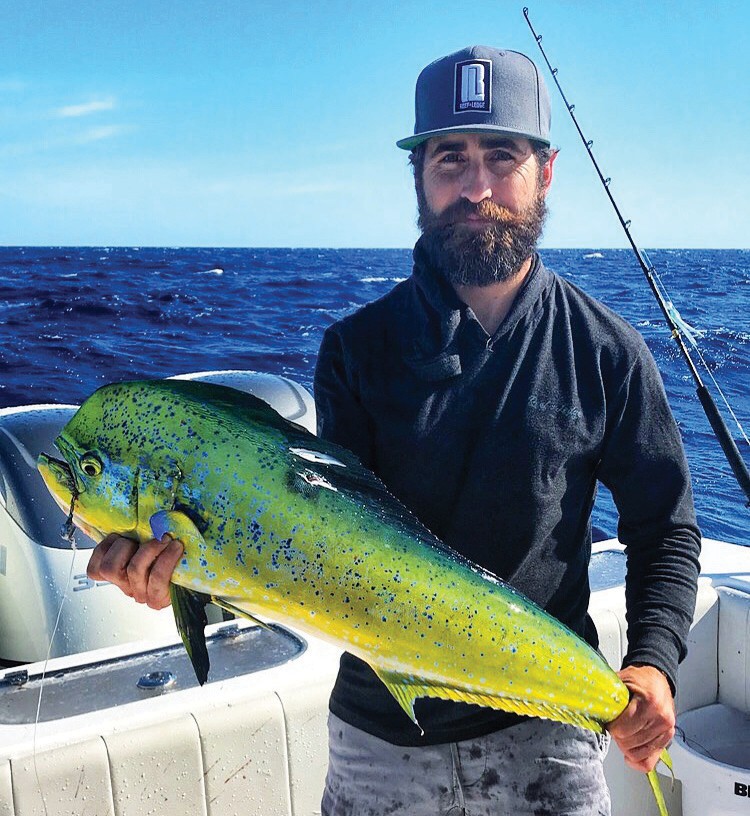 “Lead was always easy to come by since me and all my friends were fishermen,”

Neil explains. “One day, I decided to play with the lead and learn how to build jigs out of it. There was lots of trial and error involved, but the outcome was the best custom lure I’ve ever used.”

The jigs are made by hand in Key West by Neil and used for offshore and inshore fishing. He powders coats each jig and adds Mylar hair or Bucktail to each lure, with a little bit of iridescent flash wrapped around each one to catch the attention of what he hopes to catch for dinner. Neil works primarily at his new bait and tackle shop, which he owns and operates with his younger brother and business partner, Raymond. Kico’s Place Bait & Tackle, named after their late grandfather, has become a Stock Island staple for the fishing community. 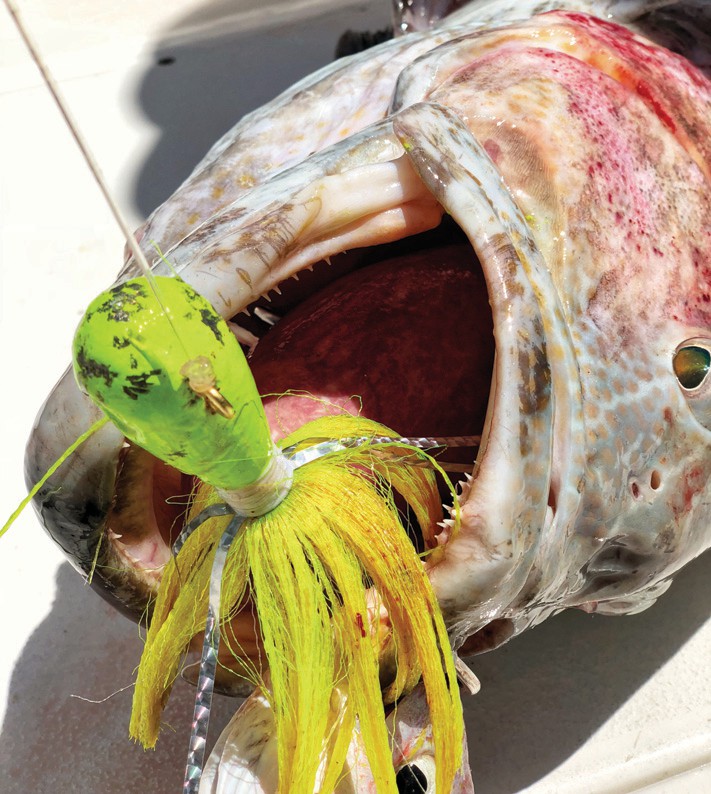 A small sample of handcrafted saltwater lures and jigs created by Neil Mellies and the folks at Kiko’s Place Bait & Tackle.

Kico’s opened early this summer and has proven to be a huge hit for the local fishing community. Aside from Neil’s jigs and lures, the shop carries locally made rods by Esky, trap supplies, a full line of branded apparel, tackle and bait harvested by the boys themselves. You’ll also find fresh or frozen seafood for sale, like lobster and stone crab (when in season, of course).

Kico’s Place is open seven days a week for your fishing pleasure. When you set foot in the shop, you’re instantly greeted by either Neil or Raymond. Local art made from old reclaimed wood and deer the boys have hunted down fill the walls while Neil’s jigs and lures fill the racks. When he’s not busy running the shop, you’ll find Neil sitting at his work bench, carefully tying each jig and making them pretty before they find their way to the hands of an ever-growing number of local Florida fishermen.

I decided to stop by and ask Neil to teach me how to tie a jig one Key West afternoon. Fishing is in my blood. As the daughter of a fisherman, I started in the industry early. My very first job in high school was at Murray Marine on Stock Island. I bagged chum and caught fresh bait for all the local guides. I would wash boats and filet fish with all the captains, proving to be more than just a pretty face. I know it’s hard to believe the girl dripping in Balenciaga once did this — and did it well, I might add — but it’s true. I grew up with the Mellies brothers. I would always see them running amok at the local sandbars, flats and reef the island is so famous for. It was only natural that when I wanted to learn how to tie a proper jig, I would call Neil.

A true Key West boy, Neil knows the waters of Key West better than the back of his own hand. Neil spent his entire childhood on the water fishing and diving. He and his brother have always been known by local charter guides for creating custom works, building things and improving everything they touch. They’ve always had a knack for making things better, so it’s no surprise that Kico’s has become known for catching the eyes of fishermen before the fish sometimes. 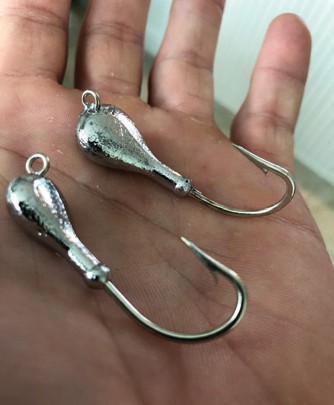 I set foot into the shop and, after exchanging pleasantries and good fishing stories, Neil gets to work. He pours his molds and paints the lures off-site and spends his time tying each jig to perfection in-house. He has a contraption called a Jurassic Vice that is used to hold the jigs in place while he embellishes each one. The style of hooks that he uses, VMC and Mustad, is thicker and bigger than most.

I find a seat next to Neil and begin watching his process. He is a master of his craft, even to the untrained eye. His eye for design and attention to detail show in each lure he handcrafts. You can tell tying the lures has become second nature for the entrepreneur. 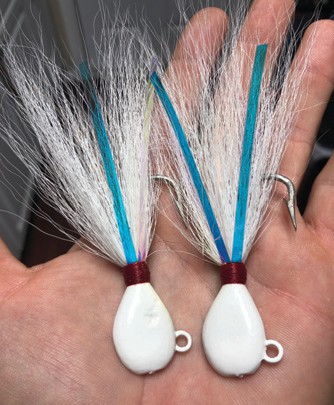 Neil carefully goes over the process with me and begins to show me how to properly tie a pattern. We go back and forth with fishing stories and he teaches me the art of the trade. The outcome is not bad for my first time, even if I say so myself. And if catching fish and coming up with a great fishing tale is what you’re looking to do, then purchasing a custom jig and lure from Kico’s needs to be added to your Key West bucket list.

You can find Neil’s full line of custom jigs and lures at Kico’s Place Bait & Tackle, at 5200 Overseas Highway on Stock Island. ¦