Lights up at the Key West Theater

CITIZEN COPE. BIG BAD VOODOO DADDY. Jefferson Starship. Marshall Tucker Band. These are just a handful of the world-renowned musicians who have diverted their tours and maneuvered their gargantuan buses all the way down U.S. 1 to play to eager crowds at the end of the road. And for that, we have the ever-evolving Key West Theater to thank — a multipurpose, not-for-profit, cultural outfit whose yearly offerings run the gamut from Grammy Award-winning artists to local charity events and intimate songwriters shows.

Looking at the pink building with bright turquoise Miami-reminiscent details that now houses the Key West Theater, you would never imagine the history the building’s walls hold. Located at 512 Eaton St., on the unassuming corner of Eaton and Bahama streets, the Theater has had quite the fascinating and bizarre past.

Originally constructed in 1848, the building was opened on Jan. 2, 1849 as the site of the First Baptist Church. In 1886, the church building was destroyed by fire and subsequently rebuilt. The “Great Fire of 1886” started at the San Carlos Institute, which was located then in its current location on Duval Street between Fleming and Southard streets. On March 23, 1905, the Eaton Street Baptist Church opened for worship. The church sat undisturbed by fire for years until 1956, when it was burned down again by the serial arsonist Billy Watkins Moody. The building was then rebuilt for the third time and sat empty for a couple of decades until the late 1980s, when a local businessman purchased it and turned it into the Club Chameleon, a hotspot for cultural events like the Key West Follies variety show until it closed for a long stretch in the early 2000s. 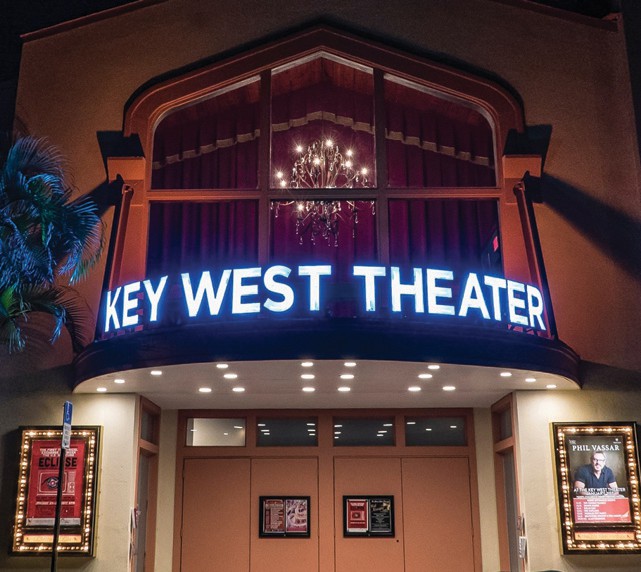 The marquee of the Key West Theater has become an architectural landmark. COURTESY PHOTOS 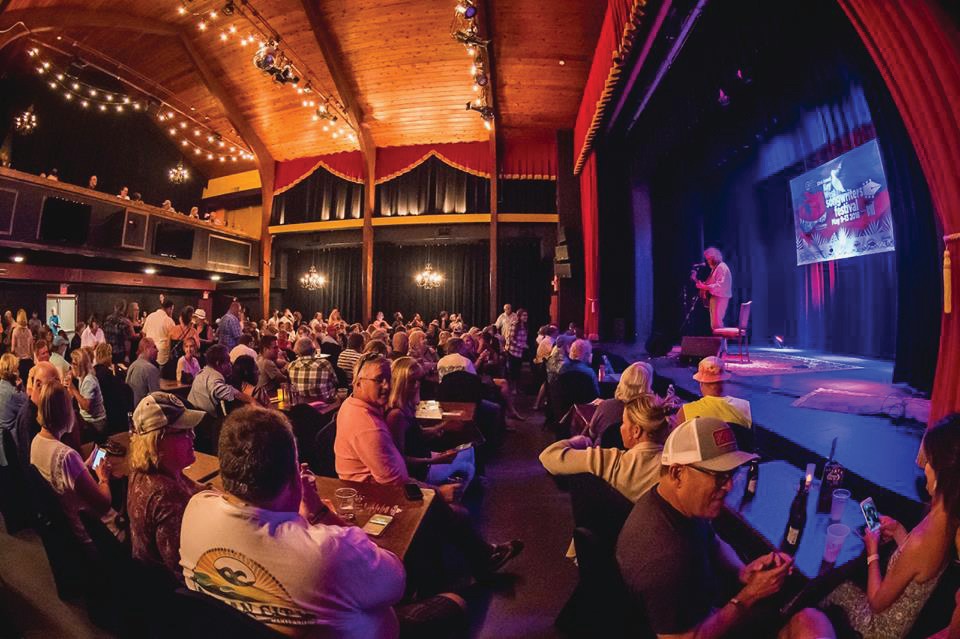 After hearing that Tap had bought the theater, local theatrical trio Juliet Gray, Mike Marrero and Landon Bradbary approached him about producing their own work in the space. That play was “By Popular Demand,” a riotous show within a show about a woefully under-prepared theater (a theme perhaps not unfamiliar to the writers, directors and producers at the time).

From there, the diversity of the Key West Theater’s programming has skyrocketed. The Theater is now owned by the Rams Head Group, a national concert venue manager that brings touring artists down to the Keys. The concerts have been hugely successful and lauded by locals and tourists alike as filling a niche not quite satisfied by the numerous smaller live acts that perform daily in Key West. This year the Theater is on pace to host about 60 national artists and bands, including John Waters, The Psychedelic Furs, 10,000 Maniacs and Rickie Lee Jones. 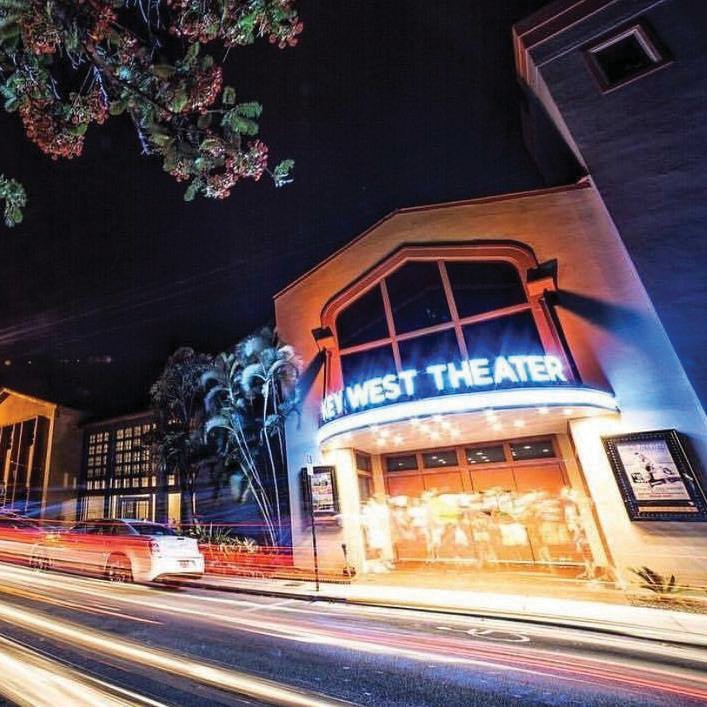 In many ways, the Key West Theater is like a chameleon that changes its offerings to accommodate the needs and desires of the community. According to Kelly Norman, the executive director of the theater, “The general excitement surrounding everything we accomplished over the last year has been fantastic. We rolled out a whole new website, revealed our Backstage Listening Room and opened the new location of The Grateful Guitar, where musicians can come for all of their guitar needs — from strings to lessons.

Our new additions are very music-driven, which fits the mold for what we embody here as a music venue. That said, we are still a performing arts center as well. We have the state of the art dance studio on the second floor and we’ve brought on local dance instructor Kyla Piscopink to head up the studio where she will hold weekly classes and workshops as well as provide a rehearsal space for local productions like ‘The Nutcracker.’”

As a community-oriented arts center, the Theater also hosts numerous nights featuring local musical talent, including the Sunday Ramble Concert Series. The Ramble events specifically highlight local musicians and bring together artists who otherwise don’t get to perform with one another. “As far as the main stage goes, we’ve added a lot of great local events to the lineup,” Kelly explains. “So far this season, we’ve hosted record launches for local musicians like Karri Daley, Tony Baltimore, Jeff Clark and Juliana MacDowell. We’re also hosting Kathy Gilmour & Friends, a night of theater to benefit the Thornton Foundation for Parkinson’s Awareness, for the second year in a row. It’s really important for us to champion local talent and give back to the community as much as we can.”

The theater has also had great success bringing back the old-school musical talents of Key West’s past with events hosted by local musical historian Ralph DePalma. On April 22, DePalma will be producing the 50th annual Earth Day Celebration featuring That Hippie Band, which will be playing songs from the Age of Aquarius. DePalma also routinely produces concerts featuring Key West’s most famous homegrown musicians, like Coffee Butler. For the Key West Theater, preserving the memories of Key West’s musical and theatrical pasts and giving voice to the island’s musical future is paramount to its mission.

And to further encourage local musicians to celebrate their talents, the theater is also home to the Back Room, a recording studio, alternative theater space and rental venue. The Back Room features state-of-the-art recording equipment that local musicians can rent to record professional-quality albums. The intimate space is also home to the Songwriters Speakeasy Series, a concert series intended to feature local songwriters and their original works. (Think VHI’s Behind the Music meets MTV Unplugged, but much cozier.)

By adding The Grateful Guitar retail space at the front of the theater, Kelly hopes to reach an even more diverse musical community. “Aside from having the retail aspect of The Grateful Guitar, we have enjoyed working with them on community events like the free ukulele night they hold on Wednesdays,” she says. “Daryl Brooke, owner of The Grateful Guitar, is very involved in the community as far as working with May Sands Montessori and the music programs in Key West’s schools and we love that. We’re excited to be even more involved with the youth arts community in the future. We may have a music-driven mission, but we are still very much a holistic performing arts center.”

Perhaps most important to highlight is that the Key West Theater is in fact a 501(c)(3) not-for-profit organization, so support from the community and the tourist economy is crucial to ensure their continued contributions to Key West’s cultural landscape.

In addition to concerts, plays and comedy shows, the Key West Theater is also available for rentals for everything from burlesque shows, Polish folk dancing concerts and pole dancing competitions to private parties, seminars and corporate events. At the end of the day, for the theater’s founders and employees, the Key West Theater is all about celebrating the magic that exists in the artistic community here in the Keys.

More information about the Key West Theater, the list of upcoming shows, and contact information can be found at www.thekeywesttheater.com. New shows are announced every Monday, so join the mailing list to stay up to date on the goings-on and make sure to check out the schedule while you’re in town. ¦