On Monday, March 2, 1699, French-Canadian explorers Jean- Baptiste Le Moyne, Sieur de Bienville, and Pierre Le Moyne, Sieur d’Iberville, landed on the west bank of the Mississippi River about 60 miles downriver from New Orleans. The following day was cause for double celebration — not only had the brothers discovered new(ish) territory, but it was also Mardi Gras, the Roman Catholic French tradition that encouraged the faithful to indulge in a bit of revelry prior to the 40-day ascetic fasting period of Lent. On the night before Ash Wednesday in the old country, the lack of refrigeration meant that all of the meat, cheese and milk had to be consumed, lest it go to waste while the household fasted. Hence, Mardi Gras, or, as we know it, Fat Tuesday.

Back in the New World, Bienville went on to found Mobile, Ala., the first capital of French Louisiana, where French settlers began to celebrate Mardi Gras in 1703. In 1723, the capital was moved to New Orleans and the growth of the city plus its Creole connections made fertile ground for Fat Tuesday to take root, grow and mutate like a debauched weed. Today, Mardi Gras celebrations in New Orleans draw hundreds of thousands of visitors to the city to attend parades and parties and pack the Big Easy from end to end. 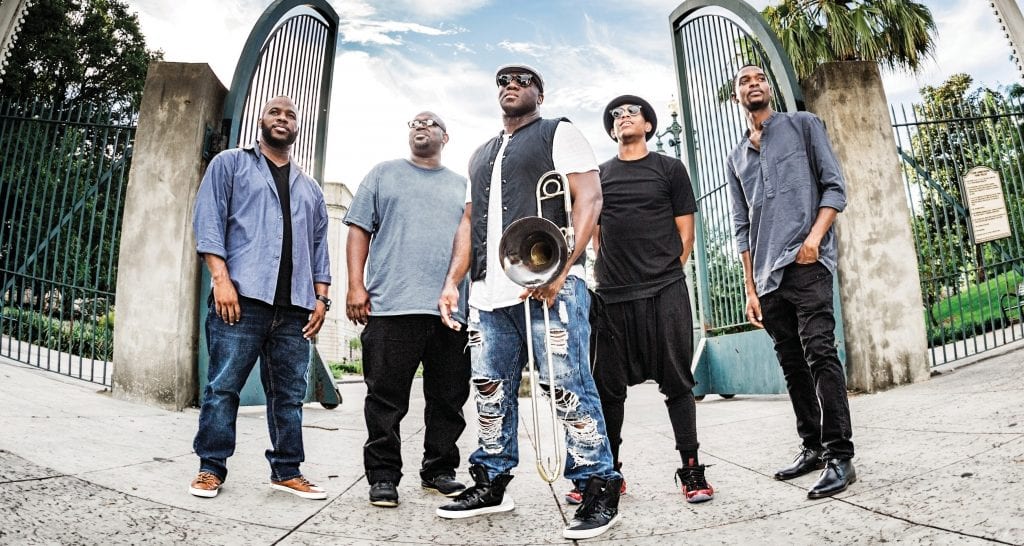 Key West may not sit on a bayou or have deep French roots, but it’s been said on more than one occasion that New Orleans and Key West are kind of like sister cities. For starters, the oppressive humidity is overwhelming, whether you’re on Smathers Beach or strolling the Garden District. The Southernmost and Crescent cities are both known for their laid-back, live-and-let-live vibes. Our literary histories run deep, with Key West laying claim to Tennessee Williams and Ernest Hemingway, both of whom were known to tipple in the Big Easy. And above all else, we both love a good time.

Now, Key West certainly isn’t looking to steal anyone’s Fat Tuesday thunder, but if you know anything about this fun-loving town, you know that we can’t resist a good party — especially if that party includes music, mirth and more than a little giggle juice. We don’t have 300-plus years of masquerading tradition to build upon, but Key West’s is finally ready to host is first Mardi Gras festival on Sunday, Feb. 9, at the Coffee Butler Key West Amphitheater — but we’re doing it our way.

To lend things that jubilant Mardi Gras air, Rams Head is bringing in New Orleans musician Troy “Trombone Shorty” Andrews, who will represent the Krewe of Freret as the Grand Marshall of their Mardi Gras parade next week in the Crescent City. Along with a performance by Trombone Shorty and Orleans Avenue, you can expect the likes of Big Sam’s Funky Nation and Grammy nominees Tank and The Bangas. Returning to Key West for the first time since 2018 will be Rebirth Brass Band, who are known for combining the traditional New Orleans brass band sound with hip hop, jazz, soul and funk. 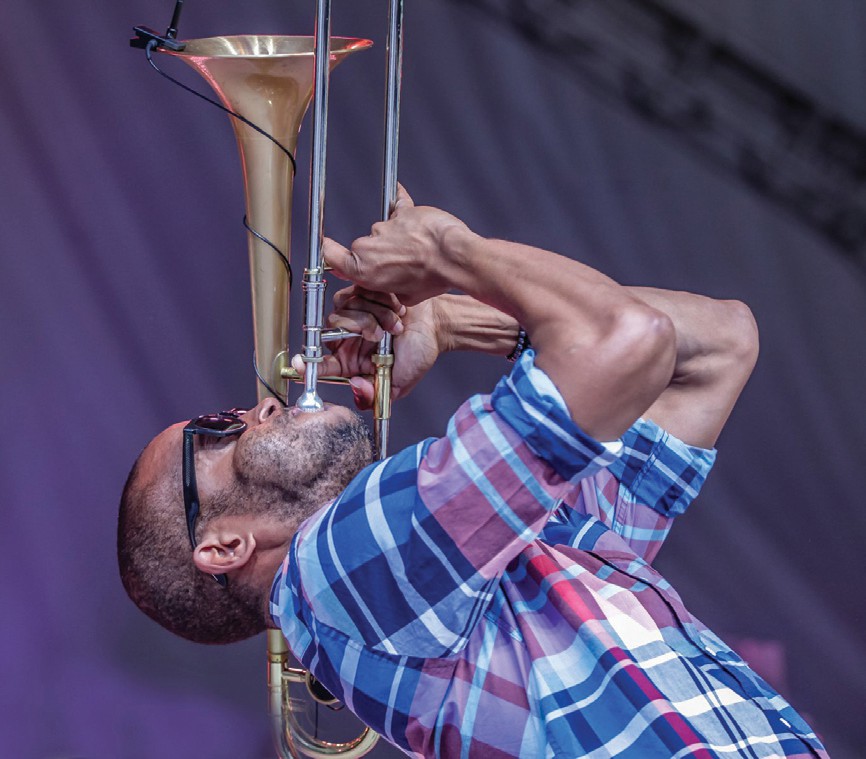 According to Anthony VanDaley, director of operations and marketing for Rams Head and the acting manager of the Coffee Butler Amphitheater, the music was just the first building block in creating a Mardi Gras party that will cement our New Orleans connection. “We booked these four really great New Orleans bands and then realized that Key West doesn’t have any type of Mardi Gras celebration,” he says. “We have Fat Tuesday’s and that’s about it. People always compare Key West to New Orleans, so we thought it would be perfect to turn this concert into a festival, especially now that we have the space at the amphitheater. These musicians are really going to bring the feel of New Orleans right to Key West.”

Unlike some of the New Orleans Mardi Gras activities (Google Krewe du Vieux — we’ll wait), this family-friendly event will include fun for all ages. Children 10 and under are free and the whole family can enjoy face painting, a bounce house and a masquerade mask decorating station. 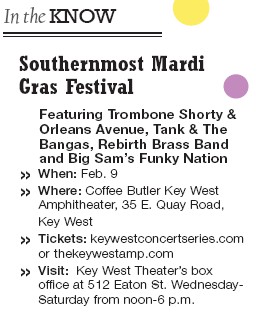 “We’re really committed to making this a family-friendly community event,” Van- Daley emphasizes. “Between the bounce house, the face painter and the Mardi Gras mask creation station, we’re really hoping to provide activities for kids of all ages in a safe and comfortable environment.”

No Mardi Gras festival worth its salt happens without beads (environmentally unfriendly though they usually are), so local organization MARC House will be selling and distributing beads at the amphitheater all day. In order to avoid waste and eco-destroying disposal so close to the Gulf of Mexico, MARC will also be collecting and recycling all bead necklaces in designated bins when the festival comes to an end.

For this midnight snacker, the best part of New Orleans is the food — crawfish, étouffée, beignets, bananas foster … sigh. The organizers of the Southernmost Mardi Gras Festival agree, so you can expect a great mix of NOLA-inspired fare from multiple food vendors. Chef Michael Torres from Tempt at The Saint Hotel restaurant will be on site cheffing up authentic Cajun bites like pulled pork in a Creole sauce, NOLA-style gumbo, king cake and more. Joey’s Bag o’ Donuts will be switching things up and serving beignets from their food truck while Endless Summer Grill is perfecting andouille sausage with all the fixings. Clemente’s will be rolling in its trolley with an across the board favorite: hand-tossed and wood-fired pizza.

For the drink connoisseur in your group, Fat Tuesday’s is donating frozen hurricanes and piña coladas, which will be served in a collectible and reusable cup, Multiple pop-up bars will be offering surprise craft beers (fingers crossed for Abita Purple Haze!), mixed drinks and domestic beer. The vendor marketplace will feature exclusively local vendors, including Lost Boy Creations, Concrete Ship Mercantile, An Elegant Touch Art & Engraving and Sandbar Clothing.

Though Key West’s one-day festival is a mere fraction of the weeklong celebration that consumes New Orleans, the goal is to grow the Southernmost Mardi Gras to be a complement to its Creole counterpart, if not in size, then at least in heart. “We’re really hoping to build and evolve year over year,” VanDaley says. “This year we have four bands, Cajun food, a partnership with The Saint Hotel (which has a sister property in New Orleans) and an after-party Fat Tuesday’s. Next year, we’d love to be able to plan a parade — even if it’s just down Duval Street to the amphitheater. Each year, we’ll change up the bands and get bigger and bigger, which will hopefully put us on the map of Mardi Gras celebration destinations. ¦