Across industries, the challenges this year has presented have required flexibility, adaptability and creative thinking.

After months of cancellations, postponements and complete shutdowns, Key West’s theaters and other cultural venues have been forced to pivot and are using every strategy they have cultivated over the course of the pandemic to keep the arts alive this season. And many of them are doing so despite the cost, simply because they are desperate to give performers a place to create, determined to stay visible and eager to satisfy those theater devotees who have been hoping and praying for some cultural normalcy this season.

After a tumultuous year, it is apparent that our community is hungry for artistic expression. And theater is real human emotion, standing alive, demanding attention and performing for you in a moment that will never be repeated. That hunger is something Joy Hawkins, artistic director of the Red Barn Theatre in Key West, understands. 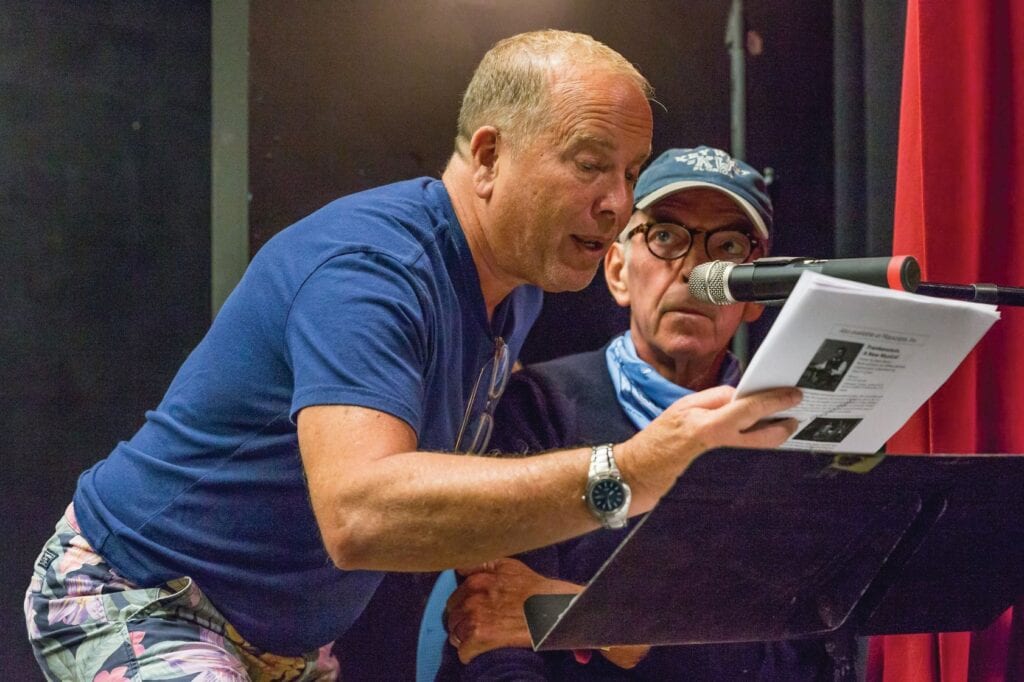 Tom Thayer and John McDonald in Waterfront Playhouse’s On the Air series. COURTESY PHOTO“The arts cannot be forgotten or corralled,” said Hawkins. “All of art explores what it is to be human.”

Red Barn, established as the first professional theater on the island by the Key West Community Players in the 1940s, has a proud legacy of performance in Key West, having attracted a roster of famous players, playwrights and various theater professionals in the decades since it first opened its doors.

“We had a beautiful stage designed and ready to go,” said Managing Director Mimi McDonald, “which would have kept the audience back about 12 feet. And we’d worked out several protocols regarding spaced out seating by pods, bar service, and were even looking into designing digital programs that could be accessed by your mobile phone.”

The Studios of Key West has presented its “Between Two Palms” conversation series online. COURTESY PHOTO

It might have worked, but it became apparent that city guidelines regarding entertainers — where they must either be separated from their audience by a Plexiglas partition, or wear masks during their performance — were not going to be feasible for a live theater performance, even outdoors. And concern for the well-being of their patrons as the virus cases were increasing was foremost in management’s mind. For the safety of all, the decision was made to postpone live performances until conditions improve.

However, the Red Barn will continue with its streaming offerings following the enthusiastic reception of its first online streaming production of Nora and Delia Ephron’s “Love, Loss and What I Wore” earlier this month. “We’ll be making an announcement soon on what will be available in the New Year,” said McDonald, “but fans of theater and supporters of the Red Barn should make plans to catch the free streaming of Darrin Hagen’s hilarious ‘With Bells On,’ which will run from Dec. 16 through Dec. 20 on our website.”

“With Bells On” was a smash hit for the Red Barn last Christmas season, directed and costumed by Christopher Peterson and starring Trey Gerrard and Don Bearden. It’s a light comedy about a meek accountant trapped in an elevator with a flamboyant drag queen on Christmas Eve. To view the play, go to www.redbarntheatre.com and click on the link for the play.

For now, the Red Barn will continue to monitor developments and the city’s guidelines, and as soon as it is deemed safe, will resume its season of live performances.

But it’s a wait-and-see game, as it is with most everyone else.

“We’ll be back,” said McDonald. “But for now, let’s all stay safe and do what we can, which for us, is to offer our online streaming theatrical events. We’ll see you soon.”

Dubbed “the Best Professional Theater in Florida” two years in a row by Florida Monthly Magazine, the Waterfront Playhouse, a not-for-profit professional theater, has been at the forefront of bringing cutting-edge theater straight from Broadway to Monroe County since its inception. This season marks the theater’s 81st year and the Waterfront shows no sign of stopping its award-winning performances anytime soon.

Fringe Theater has rented the first floor of the Armory on White Street to maintain distancing. COURTESY PHOTO

The Waterfront Playhouse’s free “On the Air” series, presented in association with US1 Radio, will continue in December with Charles Dickens’s timeless “A Christmas Carol,” which will be broadcast at 8 p.m. Dec. 24. “A Christmas Carol” has been adapted for the radio by John McDonald and will feature Mr. McDonald as Scrooge and Arthur Crocker, Bob Bowersox, Pony Charvet, Melody Moore, Carolyn Cooper and Gerri Louise Gates. Because of current restrictions, tickets are not available for live viewing of the broadcast, but anyone can tune in live by visiting www.us1radio.com at the time of the performance. For those patrons who would like to make a contribution, visit www.waterfrontplayhouse.org.

The Studios of Key West has built an entire season of online musical and theatrical offerings. COURTESY PHOTO

True to its eccentric nature, Key West’s Fringe Theater has fully embraced the strangeness of this year by doing something it has never done before — settling down in a single physical location. After working for months on a plan that would allow the Fringe to present live theater while ensuring the health and well-being of everyone involved, the troupe agreed that a space they could control was a must. Thus, they have rented the first floor of the historic Armory building (600 White St.), which will allow them to present their main stage season in a space that accommodates social distancing and other appropriate health protocols.

Reflective of our isolated era, Fringe’s 2021 main stage season is filled with one-person shows that will be presented online and, when possible, in person. 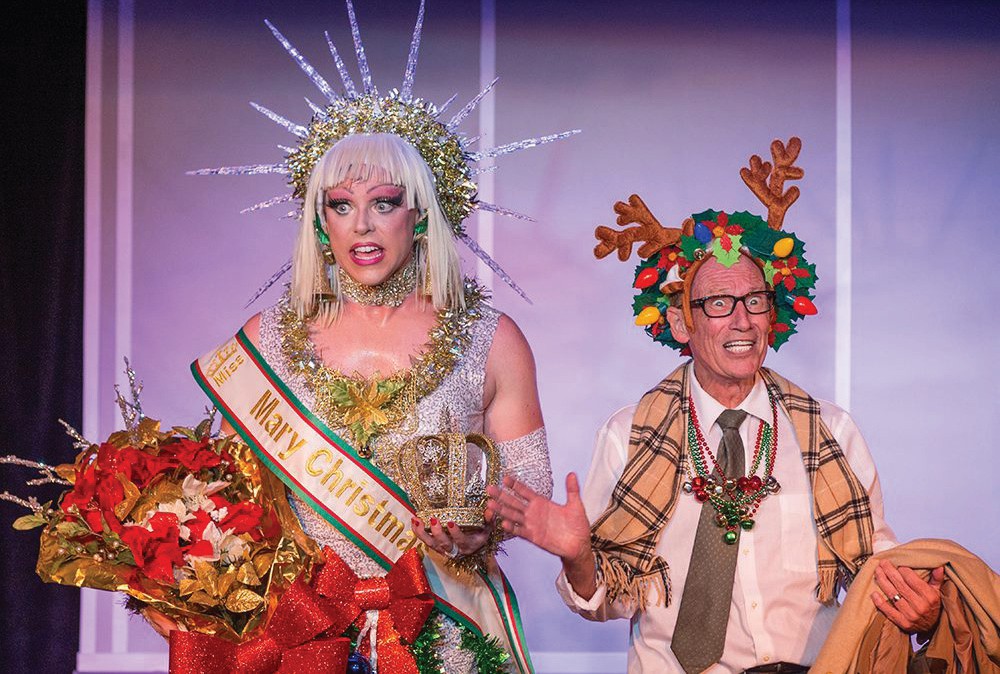 The Red Barn Theatre will offer a streamed version of the comical “With Bells On.” COURTESY PHOTO

“Accidentally Brave,” an inspiring true story by Maddie Corman about discovering a new normal when your familiar world falls apart, starring Wende Shoer runs from Jan. 20-30. “The Atheist,” a play by Irish playwright Ronan Noone about a crooked journalist, stars Ross Pipkin and runs on the evenings of Jan. 31 and Feb. 1, 14, 15, 21 and 22. August Wilson’s “How I Learned What I Learned,” starring Richard Quint in the role originated by Wilson himself, runs from Feb. 10-20. “Diva: Live From Hell,” a musical with book and characters by Nora Bridgid Monahan and music and lyrics by Alexander Sage Oyen, will star Zachary Franchini as the titular diva and feature Michael Robinson on piano from March 10-20. Rounding out the season is “Frida K,” written by Gloria Montero and starring Francesca Silva, from April 14-24.

Fringe also has hosted a virtual Fringe Friday series since the pandemic interrupted its in-person season. Every Friday at 7 p.m., Fringe provides a link on its website to watch either a show from their archives or a new production. Fringe Friday’s digital archives feature short monologues, Lyrics out Loud and Bare Facts Reports from the Naked News Room (which is exactly as stripped down as it sounds).

Fringe’s Facebook page is also frequently updated with the latest in offbeat performance art, in case you need a quick fix during your endless social media scroll. Catch up on Fringe Friday performances you’ve missed and keep tabs on upcoming performances by visiting the Fringe’s website at www.fringetheater.org.

On Feb. 13, the Studios will broadcast an encore performance of the digital premiere of “Smithtown,” written by Drew Larimore and produced and directed by Studios Artistic Associate and Board President Stephen Kitsakos. In a small Midwestern university town a text message is sent that sets off a chain reaction altering the course of the lives of many who live in Smithtown. The play asks the question: How does technology, and the need for immediate, personal gratification on social media, undermine common sense, rationality and the rules of behavior in contemporary America? The digital play features an ensemble of performers including Michael Urie, Ann Harada, Colby Lewis and Constance Shulman. More information can be found at www.tskw.org.

We may not be able to share the experience of live theater just yet, but Key West’s vast creative community has pledged to continue to provide plentiful, accessible options to engage, as long as there are audience members, however distant, with whom to engage. ¦