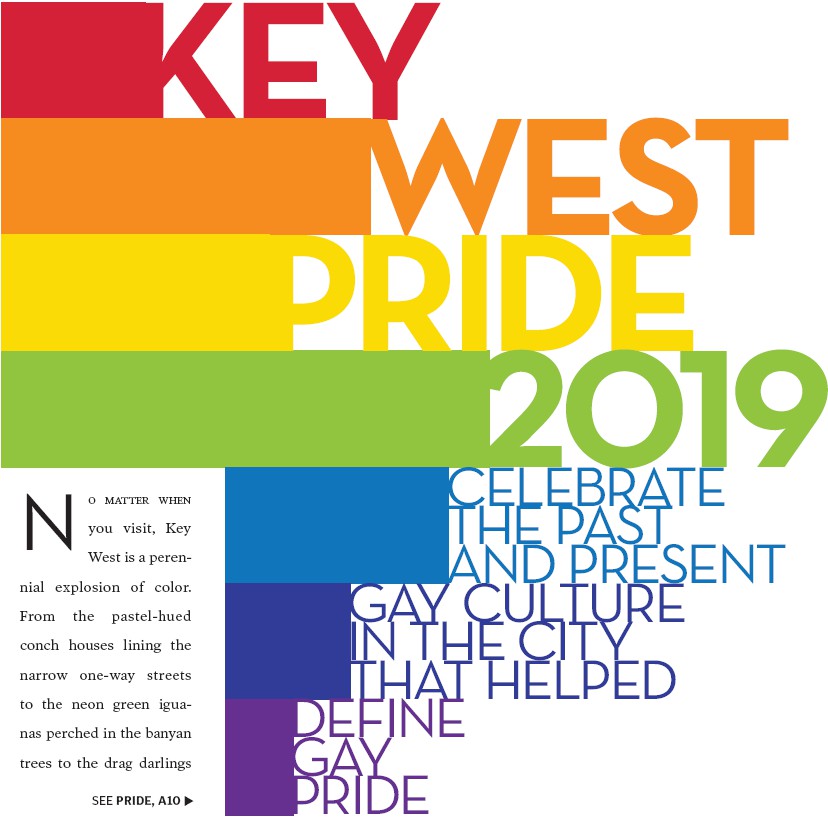 Nyou visit, Key West is a perennial explosion of color. From the pastel-hued conch houses lining the narrow one-way streets to the neon green iguanas perched in the banyan trees to the drag darlings glittering outside Aqua and 801 Bourbon every night of the week, the island is a shining prism year-round. But every June, Key West fluffs its feathers even more than usual for Pride Week, when we reach peak peacock status and bare it all (and we mean all) in our full technicolor majesty.

This year, it seems our little island is right on schedule to deliver the wildest, fiercest, buffest Pride Week yet. From fetish parties to universally inclusive church services, this year’s Pride has been carefully curated to offer participants both a respite from the outside world and a reminder that we’re not going anywhere — while things may look dark on the other side of US 1, down here we’re still parading down a rainbow crosswalk-covered street. Accordingly, we’ve updated our previous coverage of Key West’s gayest week to include a few events new to this year’s celebration. In 2012, a devastating issue of The Advocate dropped Key West from the magazine’s list of America’s Top 25 Gayest Cities. And according to a New York Times article published in 2005, an increase in the number of global gay vacation spots coupled with the island’s meteoric real estate prices was to blame for Key West’s increasingly heterogeneous crowd — with a heavy emphasis on the hetero. The island’s longtime visitors and residents lamented the gradual loss of historically gay hangouts. Drag shows were replaced with Margaritavilles, all-male guesthouses were converted to condos and the streets that had for so many years been rumored to be paved with not gold, but rainbows, saw a new surge of foot traffic from frat bros on Spring Break escapades with their nubile sorority girlfriends. It was the end, The Times posited, of Key West as the Gay Mecca; the Southern bookend to Massachusetts’s Provincetown was being replaced by St. Louis, Orlando, New Orleans and even — the horror! — Jersey City. 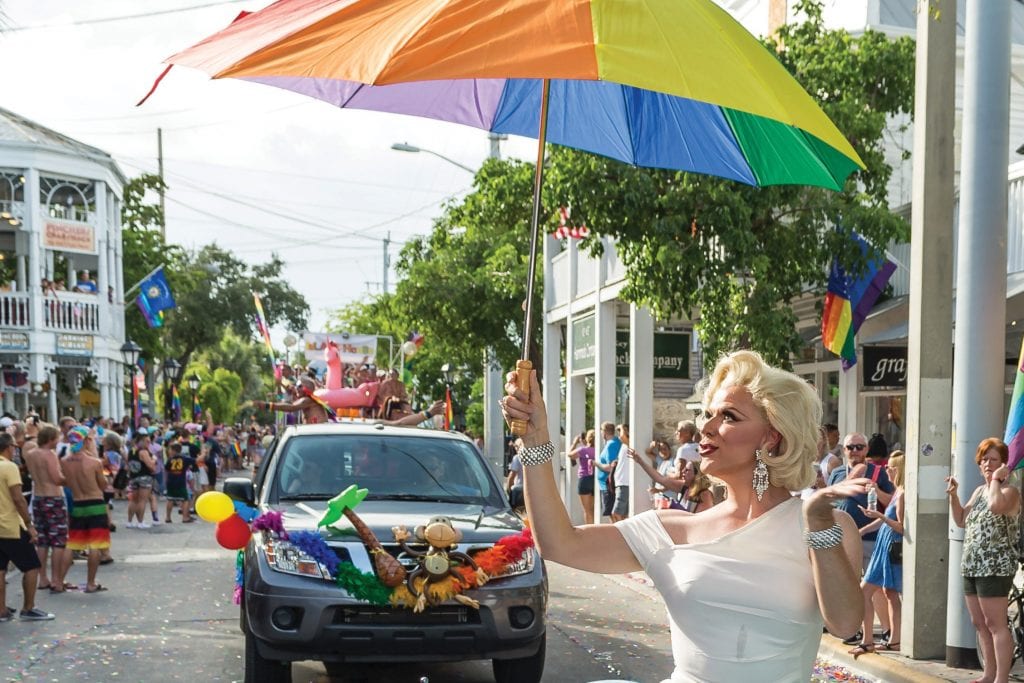 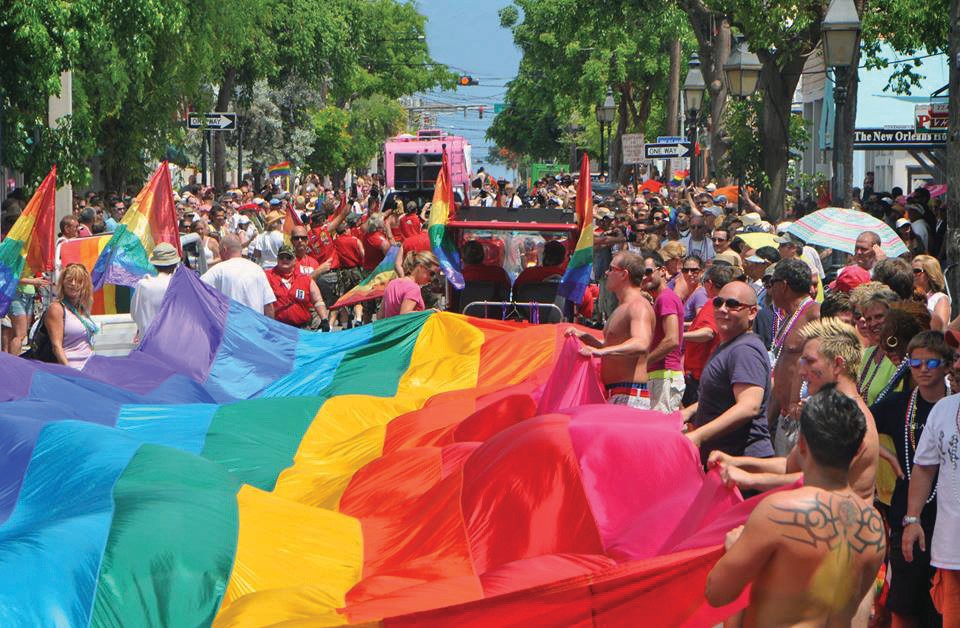 Is Key West going straight? Pop your head into the Bourbon Street Pub, one of Key West’s most famed gay bars, and over the view of the bouncing buttocks of Adonis-like dancers strutting up and down the bar, you might think otherwise. Or ask one out of every three locals that you pass in the grocery store (you can spot them if you look for the dreaded permanent flip flop tan), since one third of the island’s permanent residents are estimated to identify as homosexual. Or, if you’re an XY, enjoy a leisurely half-clothed brunch at the male-only Island House, after which you can ditch the rest of your garb and lounge poolside in the buff.

For a place with literal rainbow-colored streets (yes, permanent rainbow crosswalks usher pedestrians across Duval Street where it intersects Olivia Street) it’s clear that, while what was once referred to as “Gay Mecca” of yesteryear may have changed a bit, over the course of the thirteen years since the Times dared to question the island’s sexual proclivities, Key West has its answer: Key West is still gayer than a tea dance at La Te Da, and we’re dedicated to keeping it that way. 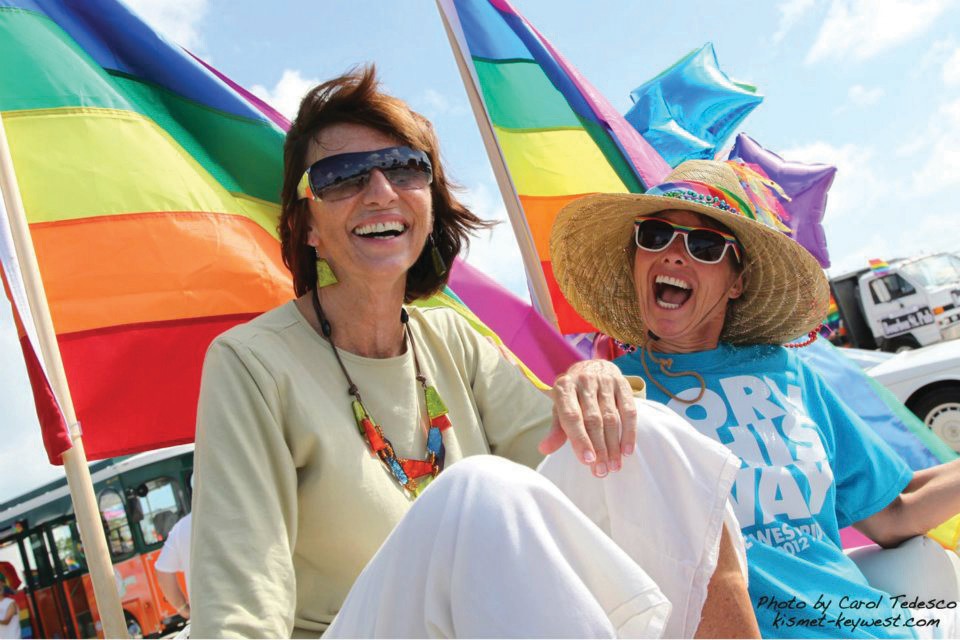 Mayor Teri Johnston and a friend enjoy a past parade. COURTESY PHOTO

Which is why, from June 5-9, Key West will host its annual Pride Week, a celebration of the past and present gay culture of Key West. And in the charged and ever-changing political climate of America’s LGBT-rights movement, celebrating Pride Week in the city that helped define gay pride serves as a reminder of just how important it is to celebrate such things, lest we forget how hard they were fought for, and how vital it is we continue to fight to ensure their future survival.

When celebrated American playwright Tennessee Williams arrived in Key West in the late 1940s with his longtime partner, Frank Merlo, he quickly established himself as what Out Traveler magazine would later dub “The Gay Grandfather of Florida’s Southern Isle,” throwing flamboyant soirees and attracting a cadre of likeminded friends and fans. Indeed, it is Williams who is often credited for establishing Key West as an official gay vacationland, thanks to his unabashedly open celebration of his sexuality. The Key West Tennessee Williams Exhibit, located inside the Key West Business Guild and home to many rare articles, photographs, first editions and other memorabilia, seeks to educate visitors on the the literary legend’s life and career, with free self-guided tours and a few curator-led talks available throughout the week. 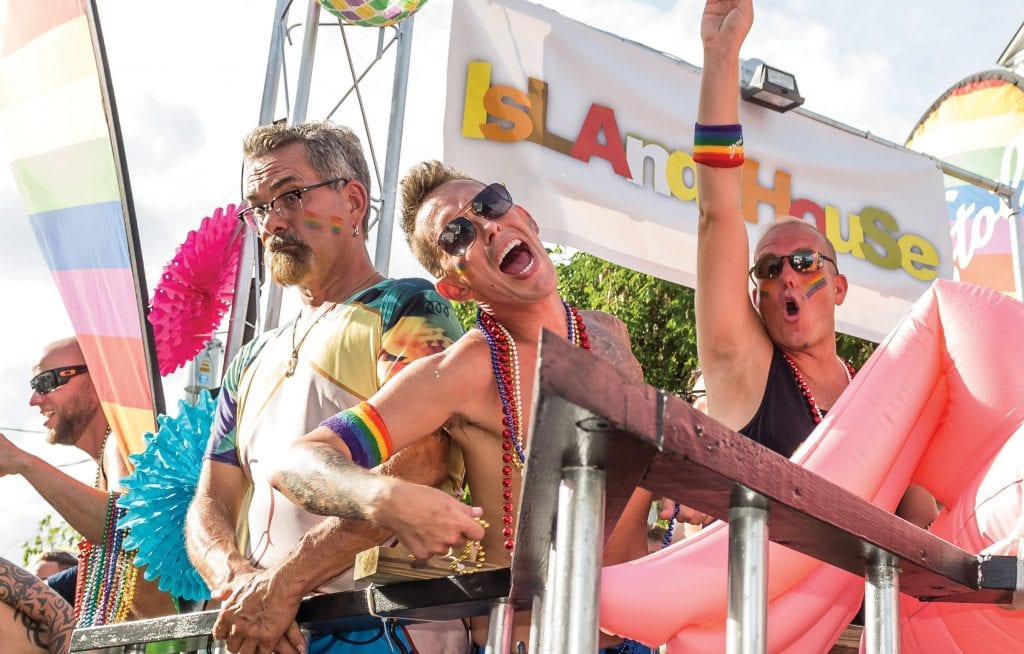 Williams, like many before him, had initially been drawn to the nonchalance of Key West, where — perhaps initially due to the size of the island more than anything else — there existed a widespread sense of mutual understanding to live and let live. Thanks to the lack of extra land, everyone was neighbors with everyone else, and a feeling of general inclusivity ran across the island. Key West had always been a multicultural hub; without a railroad linking it to the mainland until 1912, the island’s early residents of New England, Bahamian and Cuban heritage were forced to cohabitate in very limited square footage. Thus, Key West had established itself as a desirable destination for those looking for a tolerant (and warm) place to unwind long before the island became known as a gay hot spot. But it was Williams’ arrival and the playwright’s increasing fame while he lived here that turned the gay community’s attention to Key West with a focus like never before. For decades, the island remained the go-to destination for those in the gay community, and their allies, to seek sun and acceptance.

In the 1980s, the island was hit hard by the HIV/AIDS crisis and became a kind of de facto final resting place for people suffering from the virus who, due to intolerance in their own communities back home, had nowhere else to go. While the rest of the country struggled to drum up a cohesive and significant plan to dealing with the ever-expanding epidemic, the small city of Key West responded with lightning speed, raising hundreds of thousands of dollars to establish programs focused on outreach, treatment, hospice care and support. The work done in those early days by an organization called AIDS Help (now AH of Monroe County) was some of the most progressive and effective nation-wide, and the group continues that work today; the nonprofit is still the only community-based HIV/ AIDS service organization in the county.

It was during the HIV/AIDS crisis that, as part of an island-wide movement to encourage prevention and education, Key West refined its renown as a community willing to speak frankly about sex and human sexuality. Free contraception was provided throughout the island; public and private programs were established to educate teachers, hospital staff and hospitality workers on how the virus was transmitted; and frequent seminars on safe sex were held for the public. The reputation of Key West as a place where sexuality was not taboo, but was treated with an open tolerance rarely seen elsewhere, was amplified across the nation.

In fact, the Times published an article detailing how residents both gay and straight were united in their fight to help preserve the quality of life of their fellow men and women. The article, “Hard-Hit Key West Combats AIDS with Community Effort,” showed the world that, for the residents of Key West (whose voters had already elected a gay man to the office of mayor and many other high positions in government), sexual preferences should not preclude one from living and ending his life with dignity and support. The island would go on to emerge from the crisis stronger and more unified and would go down in history as having responded to the epidemic with a rapid solidarity singular to Key West alone.

This special heritage of unity has continued to be built upon over time, and while some businesses dedicated to gay tourism have indeed succumbed to economic forces beyond their control, the spirit of Key West’s gay legacy remains strong today. Key West Pride, which commenced on Wednesday, June 5, with the annual raucous kick-off celebration at the Island House, has become one of the most beloved and significant Pride Week celebrations in the U.S. While certainly not the largest, it carries with it the momentous importance of celebrating the island’s gay ancestry, and does so with the kind of gaudy antics that Key West is famous for.

Classic events such as clothingoptional gay sailing and snorkeling tours, cocktail competitions, drag shows and all manner of themed parties have been scheduled across five revelry-packed days. And while many of the events scheduled for Pride Week are undoubtedly adults-only, this year’s celebration also promises the return of many kidfriendly events for gay families traveling with children who wish to celebrate Pride in a more PG-setting, including a variety show, multiple church services and the annual Duval Street Fair.

Over the past decade, Key West Pride has become more and more inclusive, with participation from parts of the community not often associated with traditional gay culture. For instance, the event boasts an incredible history of military involvement; ours was one of the first Pride celebrations to have a Joint Military Color Guard lead their parade, while 2014 saw openly gay Iraq War veteran Rob Smith elected as the parade’s official Grand Marshal. Along with participation from the local Veterans of Foreign Wars post, Key West’s reputation for boundary-breaking fraternity remains rock solid.

The Business Guild has also dedicated itself to ensuring that the hundreds of thousands of gay tourists who visit Key West each year continue to do so (even with nearby Orlando’s siren call). And for many of those visitors, Key West might be more than just a jaunt in the sun — to many, the island represents a stalwart representative of the LGBT dream, a community where people may live un-harassed, in harmony with one another regardless of their sexual orientation.

Key West is committed to showing all of our island visitors, no matter where they come from, that there is a place for them. We are a place that welcomes everyone as they are, no matter who they are; a place that embraces and celebrates diversity. And, even more globally, a place that the rest of America should be like. It’s a lofty goal for one tiny little island, to be sure, and yet if there was ever a community capable of doing so, there’s no doubt that an island whose official motto is “One Human Family” is ready to take on the challenge.

And while increasingly inaccessible prices for homes and hotel rooms might deter some gay travelers from choosing Key West for their next vacation, the Key West Business Guild is committed to reaching out to LGBT members and supporters on a global scale, doing everything it can to get the word out that Key West is still, in many ways, the Gay Mecca it has always been, but a Mecca that must evolve with the times to ensure its survival, like any other civilization. And Key West Pride is vital to ensuring that message be broadcast as loudly, and proudly, as possible — for the sake of not just the island, but for our nation.

For a full schedule of this year’s Key West Pride events, or to learn more about the organization, visit www.gaykeywestfl.com. ¦