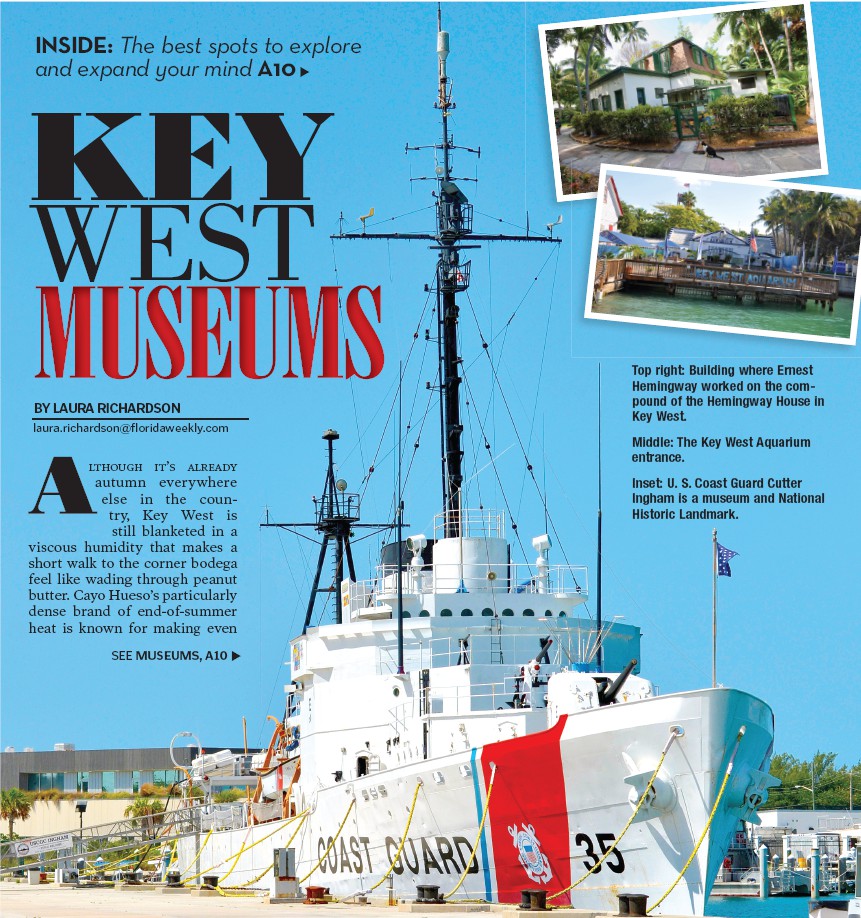 ALTHOUGH IT’S ALREADY autumn everywhere else in the country, Key West is still blanketed in a viscous humidity that makes a short walk to the corner bodega feel like wading through peanut butter. Cayo Hueso’s particularly dense brand of end-of-summer heat is known for making even the most lightning fast brains feel soggy and slow. Luckily, Key West is full of fascinating museums stretching from the Gulf to the Atlantic, where both kids and adults can attempt to stave off the cognitive slump that invades when the temperature highs just won’t quit. If you’re new in town, or if you’re just desperate for a place to escape the heat and maybe learn a few things while you’re cooling off, read on for some of Key West’s best places to expand your mind.

Hemingway may be better known for his written works (or his drunken antics), but one thing’s for sure: Papa had great taste in real estate. Check out Hemingway’s Key West digs, which — along with the honor of having housed the writer while he penned some of his most well-known compositions — were also the first house on the island to have a swimming pool. You can’t take a dip in it today, but you can admire the many six-toed cats that laze around its perimeter. The relaxed felines are said to be descendants of Hemingway’s original polydactyl friends. The museum is free to locals every day, and boasts an eclectic collection of Hemingway’s old possessions.

You don’t need a set of sea legs to visit this ship — it’s safely docked at harbor, and, after being decommissioned by the Coast Guard, now serves as a nonprofit veteran’s museum honoring those killed in action during WWII and the Vietnam War. The ship is one of only two preserved Treasury-class U.S. Coast Guard cutter ships, and the most decorated in the fleet, with two Presidential Unit Citations to her name. Now a national landmark, the Ingham hosts daily tours from 10 a.m. to 4 p.m. Tuesday to Saturday, including an excellent happy hour deal on Friday and Saturday: $5 buys you a ticket onboard and your first drink. 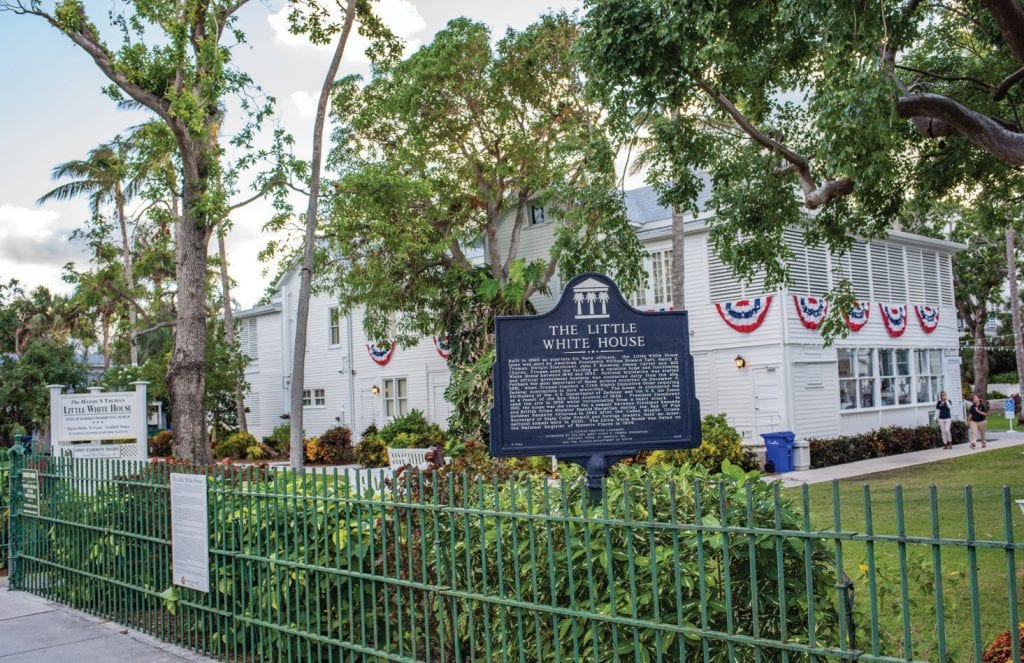 The Harry S. Truman Little White House, which has been used by American presidents for official state business.

Today, you can purchase a GPS system for your boat that will navigate you around the globe (or just to Snipes for a gorgeous day on the sandbar). But back in the 19th century, the likelihood of crashing your ship in the shallows off Key West was strong enough to support a hugely profitable wrecking business (which was essentially a legal version of finder’s keepers). The establishment of Key West’s naval base in 1823 solidified the desperate need for a lighthouse to guide boats safely through the straights. Over the course of its active service, Key West’s lighthouse played host to a range of brave Keepers and their families (including, rather progressively at the time, a female Keeper in 1848). Peruse the Keepers’ belongings, climb the 88 steps up to the top of the light and learn how this once vital beacon served to protect thousands of ships before being decommissioned in 1969. The museum is free for locals on the first Sunday of every month and any child currently matriculating at a Monroe county school may enter the museum for free year-round. Otherwise, admission is $12 for adults ($9 for locals with a Monroe County ID) and $5 for children age six and up. 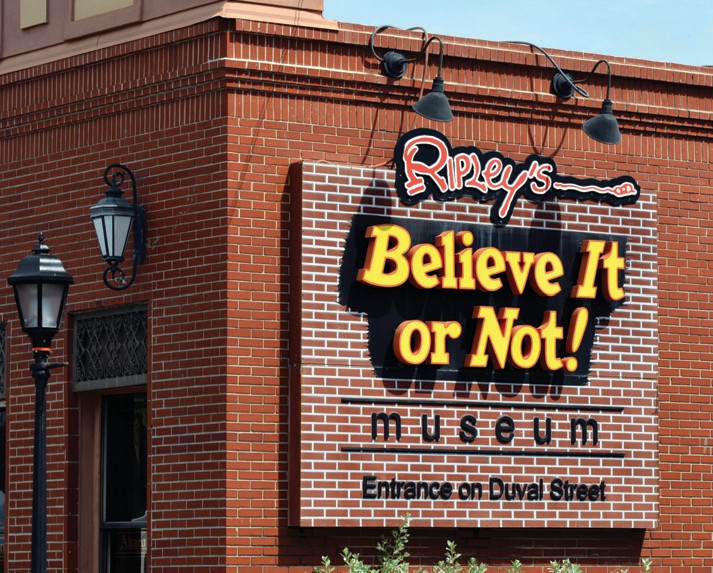 Ripley’s Believe It or Not! museum has many oddities on display, including shrunken human heads and rare animal skeletons.

Today it serves as the official headquarters of the Key West Art & Historical Society, but over the course of its storied life, the Key West Custom House has been home to a variety of Key West businesses, including the island’s postal service, district courts, navy and port of entry processing center. Despite early drunken antics that almost prevented its construction, the building is considered an architectural icon of Key West; it towers over the harbor with a red brick façade that is immediately recognizable amidst the endless blocks of wooden homes that surround it. Impeccably restored and now used as a museum, this beautiful example of Richardsonian Romanesque architecture is home to some of Key West’s most photographed outdoor sculptures. Meander through the galleries and learn about the history of Key West through family-friendly exhibits that highlight some of the island’s most pivotal moments. Year-round exhibits include an in-depth look at Henry Flagler’s Overseas Railway and Guy Harvey’s sketches of “The Old Man and the Sea.” Special exhibits from a wide range of artists are also scheduled throughout the year. Various discounts on ticket pricing are available for locals, seniors, students and small children. 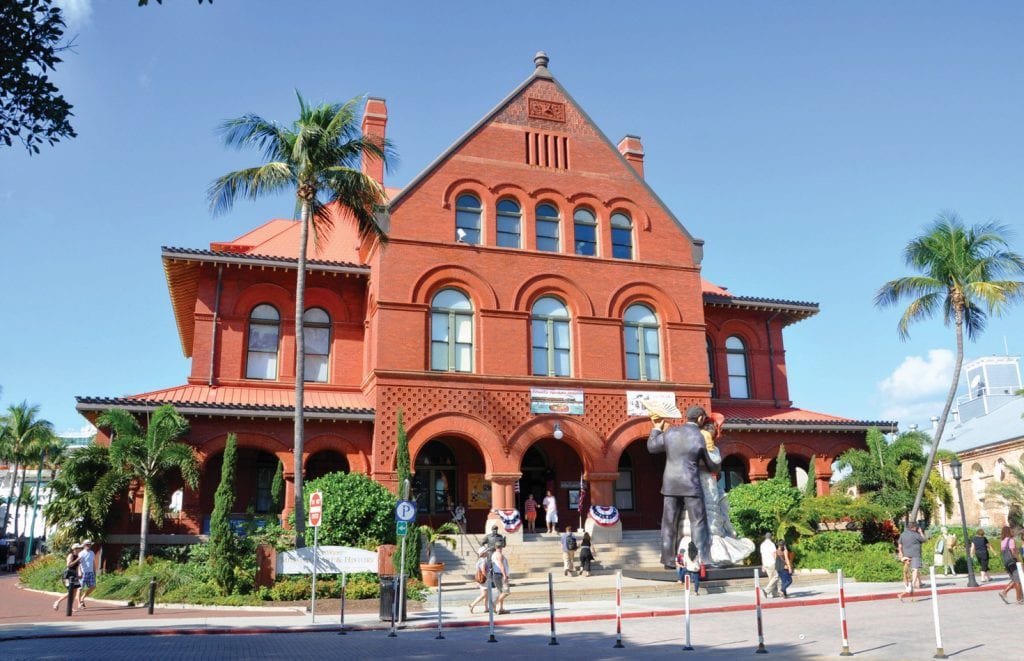 Discover the fascinating history behind this once active “Little White House,” which served as a base of operations for President Harry S. Truman during some of the most famous moments of his presidency. The museum offers regular tours by the most knowledgeable docents in town; they’ll fill you in on the house’s long and storied background (it turns out Truman wasn’t the only U.S. president to make use of the Little White House) while you peruse a collection of fine antiques and relics. Located inside the picturesque Truman Annex development, the surrounding area is lushly landscaped with mature palms, perfect for a shady stroll down charming residential lanes. Insider tip: Buy tickets online for a discount. 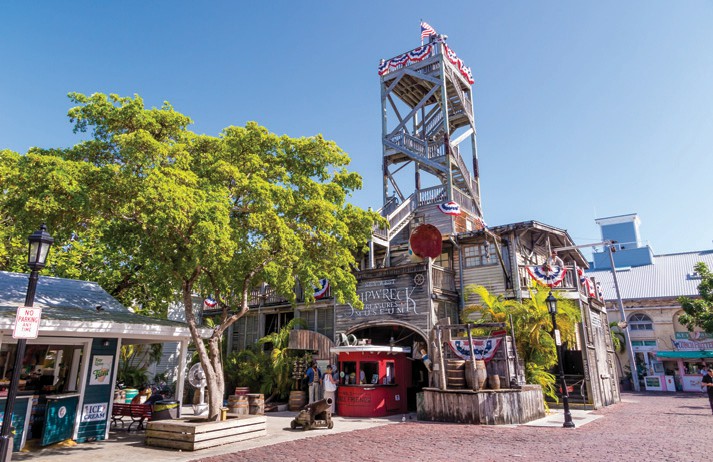 While not technically a museum, the Key West Tropical Forest & Botanical Garden offers visitors a chance to get lost in a technicolor, frost-free wilderness that spans 11 acres and features numerous National Champion-winning trees. The garden hosts yoga classes and a Sangha meditation group, and the surrounding gardens are a wonderful, semi-wild place where families can enjoy outdoor sculpture, rare plants and excellent bird watching. Ground markers point out some of the garden’s most interesting specimens. Admission is free for locals the first Sunday of each month.

A collection of costumed actors, short films and artifacts make up the Key West Shipwreck Museum, which seeks to educate the public on Key West’s yesteryear as a shipwreck salvager’s paradise. Get an in-person look at some of the valuable booty that 19th century “wreckers” (played with varying degrees of enthusiasm by actors in 1800s garb) salvaged from actual shipwrecks off Key West. But the view (and breeze) from the 65-foot tower is what makes this museum worth it for us — there just aren’t that many places in Key West to get a bird’s eye view of the island (although the acrophobic may want to think twice about making the climb — it’s a doozy).

Dedicated to the art of celebrated ornithologist John James Audubon, Key West’s Audubon House and Tropical Gardens is a wonderful respite from the infernal heat. Vibrant tropical gardens overflowing with orchids and bromeliads surround the historic house, which, in addition to its gallery of first edition works by Audubon himself, also houses a carefully curated collection of antique furniture and china. Slated for demolition in 1958, the house was saved by wealthy Key West locals Mitchell and Frances Wolfson, who paid for painstaking renovations, making the house the first official restoration project in Key West and inspiring a wave of architectural rehabilitation projects in what is now historic Old Town.

For anyone with even a superficial interest in the ocean, the Eco-Discovery Center is a definite do-not-miss during your trip to Key West. The center houses 6,000 square feet of interactive exhibits centered on the delicate underwater ecosystem of the Florida Keys. From living reef exhibits on coral restoration to an in-depth look at how marine scientists live underwater for weeks at a time during research trips, this family-friendly center is a great place to flee the heat and expand your mind. Spend an hour making your way through exhibits mimicking the various habitats found in the Keys, including hardwood hammocks and mangrove shorelines. Be sure to visit the Mote Marine Laboratory Living Reef exhibit, which includes a 2,500-gallon reef tank with living corals and tropical fish and a live Reef Cam. The gift shop is stocked with educational toys and souvenirs beyond the Duval Street $5 T-shirts and shot glasses.

If the Shipwreck Museum left you craving more buried treasure, make your way to Mel Fisher’s Maritime Museum, which offers an expansive showcase of Fisher’s famous treasure hunting efforts (both the failures and epic successes), as well as a series of deeply poignant exhibits dedicated to the history of the transatlantic slave trade. See real Spanish galleons discovered by Fisher and his crew, and learn about the conservation efforts and research programs the Mel Fisher organization performs to this day. Of course, there’s a gift shop decked out in real (and, for the more economically limited, realistic-looking reproduction) treasures, if you’re so inclined to take a piece of eight home with you.

Can an aquarium be cute? If one can, the Key West Aquarium certainly fits the bill. This is definitely no Sea World; the exhibits are small, but what this wee museum lacks in space, it more than makes up for in character. They host daily nurse shark and ray feedings (do not miss these), colorful displays of local and not-so-local fish, enthusiastic employees ready to bend a knee to explain exhibits to children, a touch tank and a sort of open-air rehab facility out back where a handful of aquatically challenged turtles have found a supportive home.

Ripley’s Believe it or Not

Yes, it’s a chain. And yes, it’s a little touristy. But this self-proclaimed Odditorium is also a great place to beat the heat. Relax in the air-conditioned 10,000 square feet of exhibit space as you peruse thousands of eclectic odds, ends and the occasional shrunken head. There’s enough weirdness to keep children and adults busy for hours — including a mind-boggling optical illusion tunnel, which will make you dizzy enough to lie down for the rest of the afternoon. The museum offers occasional discounts on tickets and coupons available at most hotel concierge desks, as well as 50% off to locals every day.

If you like your museums mobile with a side of sea breeze, you’d do well to book a seat on one of the Old Town Trolley or Key West Conch Train tours. The two offer similar tours in terms of content — you’ll get a narrated history of the island while your tour conductor drives past various points of interest — but trolley tours offer the option of hopping on or off at one’s leisure, while the conch train (technically more of a series of interconnected mini-cars) is an uninterrupted 90 minutes straight. Both offer generous discounts to military, seniors, children and second-day consecutive riders. We also recommend the Ghosts & Gravestones trolley tour, which runs every evening, for those who like a little macabre with their history lesson.

With Key West often listed as one of the most haunted towns in America, there’s plenty of recorded creepy stuff that’s gone down on this tiny island to make a ghost tour worth checking out at least once while you’re here. Whether or not you choose to believe is up to you, but it’s certainly fun (and informative) either way. There are usually enough historically verifiable anecdotes to please skeptics, while devout paranormal enthusiasts will enjoy the opportunity to photograph ghost ectoplasm at various haunted spots around town. There are tours to suit all tastes — walking tours, trolley tours, private tours and even tours that take visitors inside East Martello Fort to view the infamously powerful Robert the Doll. Just remember to ask his permission before taking his photograph — the walls are lined with letters from those who didn’t and paid the price. ¦