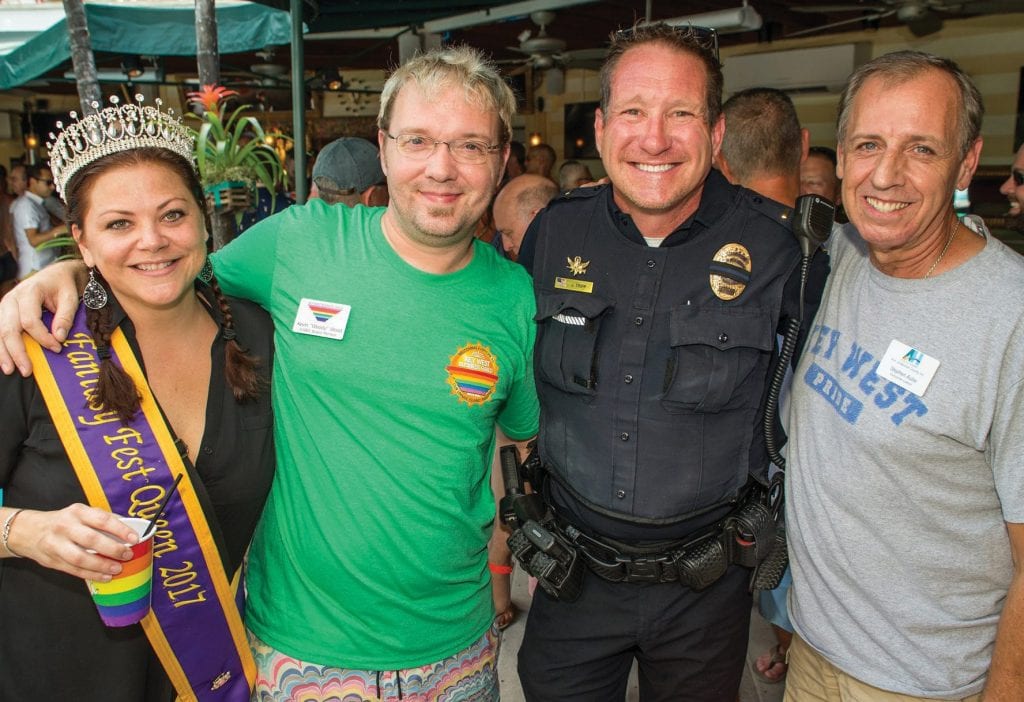 Kevin “Woody” Wood is one of two candidates vying for the title and fanfare of Fantasy Fest King, culminating on the eve of Fantasy Fest with the annual coronation. As a former colleague to A.H. of Monroe County and current board member of the Key West Business Guild, Woody has been a familiar friendly face at enough events and charitable causes to provide him with the blueprints for his all-inclusive campaign.

Kevin Assam: Your moniker is “Woody” because your last name is Wood. Is it true you reside behind a “Woodsy?”

Kevin “Woody” Wood: My front neighbor is Woodsy, it’s true. That’s a lot of Wood in one house. I’ve rarely met other Woodys and typically in generations above me. I’ve never met a Woodsy ‘til him! It’s uncommon in Hawaii where I lived for ten years. I suspect I was the only one there. The more Wood the better.

KA: Did you assume the nickname Woody as a child or did that happen much later on? 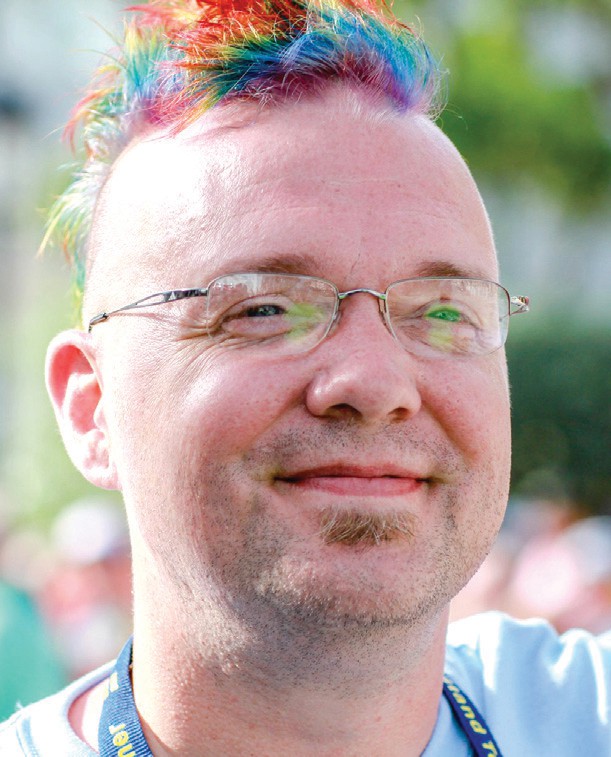 Woody: It started in high school, but caught on after. By 21, I was fully involved in the LGBT+ community. It became my full-time name. It’s understandably easier for gay guys to remember. Drag queen friends loved to tease me about it. It helped me become the person I wanted to be versus who I thought I was supposed to be.

KA: Where did you grow up? Was queer culture or personalities ever acknowledged in your household?

Woody: I grew up in Lakewood, Ohio, a gay-friendly suburb of Cleveland. My principal was a lesbian. Many of my teachers were LGBT+. I had several close gay friends. “Gayness” wasn’t acknowledged in my home, but not because it was (an unknown). I have vivid memories of both my grandfathers saying homophobic things during my early childhood. Even though my mother eventually accepted it with the love and compassion one would hope for, it wasn’t an easy path. My family loved me, but it wasn’t a very functional family. Thank god, my mother, despite initial concerns, eventually embraced me, allowing me to do the same. 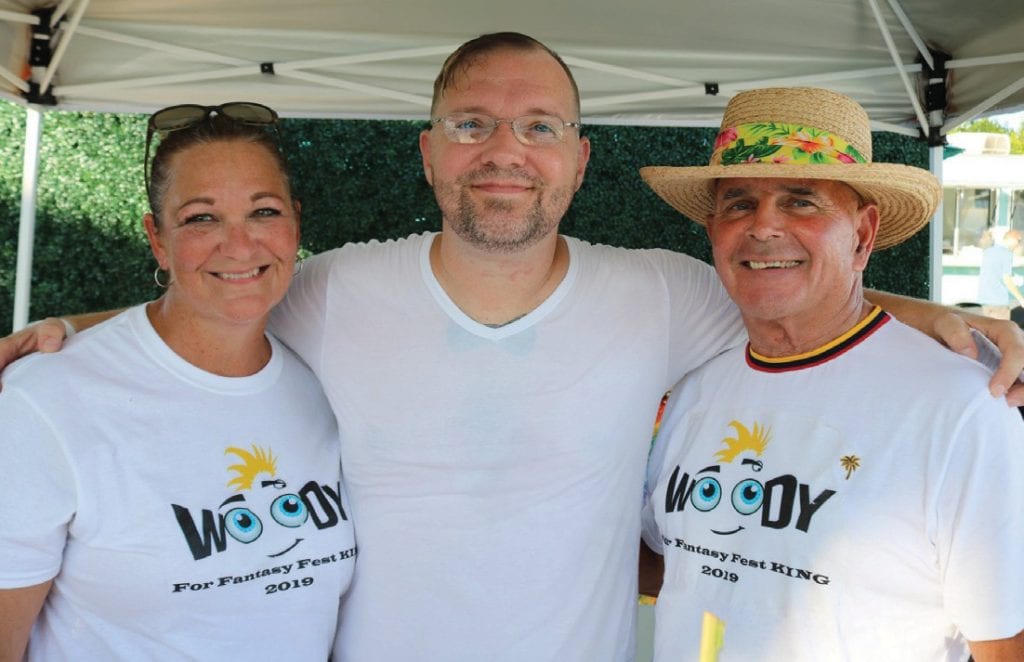 KA: Do you remember your first homoerotic encounter at school?

Woody: There were several. Since I was still afraid of what it all meant, I didn’t hang on to those memories. Although, I distinctly remember coming home from kindergarten and being asked if I made friends. I replied that I made a cute friend, Aaron. But instinctively, my mom heard Erin and asked about her, which I innocently corrected (laughs). My mom doesn’t remember that as vividly as I do.

KA: How did you view the HIV/AIDS epidemic?

Woody: I came out in my freshman year of high school in 1990. I became involved in the local gay youth group PRYSM (Presence and Respect for Youth in the Sexual Minorities). It fostered my civic mindedness. I raised money for the AIDS Walk and met community peers and mentors. I felt I found my tribe. Of course, I made friends who lost their battles with HIV and AIDS. It was devastating. I remember Ryan White’s story being on the news. Even though he wasn’t gay, he was near my age and I idolized his strength and fierceness. I was crushed when he passed. He deserved better. They all did. And still do. A few years later, I become involved with my second boyfriend,

Robby. We dated for over a year before he disclosed his shocking status as HIV positive. Although I had seen myself as a champion for HIV rights and equality, I had always been the cheerleader and never part of the storyline. It was a tough thing to deal with. I wasn’t mad. I was scared. I got tested and waited two weeks for the results, during which I escaped to Key West for solitude. It was the first place I ever felt at home. After I got my results, I understood his pain and why he hid it from me. I returned home and suggested that we move to Key West together and be among people that make us feel normal and valued. Sadly, while I was quickly able to forgive him for not telling me sooner, he was never able to forgive himself. Eventually, due to shame preventing him from pursuing medication, he lost his struggle with HIV/AIDS. That galvanized my resolve to fight for my community and my friends. I started my path to becoming an HIV prevention specialist and activist.

KA: Why does Key West make activists out of so many of its residents?

Woody: Key West allows people to be authentic without certain societal constraints. Whether it be art, writing, politics, juggling, acting, feline acrobatics or activism, this town embraces people who aren’t as readily welcomed elsewhere. That’s why so many amazing people still live here.

KA: Why are you the most eligible candidate to win King of Fantasy Fest?

Woody: I don’t know if I’m the more eligible candidate. I decided to run in July of 2016. Fortunately, at that time I was an employee of AH Monroe and ineligible. After I left AH, I knew it was time. The ideas I have about inclusion and campaign goals will trigger generosity and raise money. Scott Pridgen, executive director of AH Monroe, has said for years, it’s not about the money, it’s about the message. I have an important message. Whether or not I get the crown, people will remember my message and hopefully it changes the game.

KA: If it’s not about the money, why are dollars the only determinant used to declare a winner?

Woody: There has to be a quantifiable and fair method and the name of the game is fundraising. I would love to see future campaigns crown the top two fundraisers regardless of gender! If that means two Queens or two Kings, so be it! It’s 2019. Equality is the way of the future.

KA: What’s the marquee event of your campaign?

Woody: It’s hard to choose which event is the premier event. One is family-focused. One is loaded with giveaways. One has the potential to win a big cash prize. My orchid and art auction has a few extremely rare pieces of art that could set records. I can’t fathom placing one above the other.

KA: What was your favorite past campaign?

Woody: My favorite campaign took place around Hurricane Irma. All of the candidates showed so much grace under pressure. I’ll always have a soft spot for Queen Destiny — being her own Aqua Idol singer, her event creativity, the accomplishments she’s achieved before and after her crowning and her voice! Whenever I struggle with my campaign, I think WWDD. What would Destiny do?

KA: What specifically are you borrowing from her playbook?

Woody: Surround yourself with calm, positive people. Zero drama. Keep it classy. Include as many as possible. And do it for the community, not the headgear.

KA: Are you concerned about playing it too safe? What exactly is your campaign doing differently beyond some uniquely themed events?

Woody: Sure, I’m concerned. I want to raise money! There are other ways to make a difference. Barring few exceptions, all of my events are free to the public. I thought about what I’ve learned behind the scenes. I’ve watched so many amazing events for years. Some extremely lavish! Often, the community we are raising money for is unable to attend due to high ticket prices and their limited income. My retired, fixed income friends are also unable to attend as much. I couldn’t attend as often as I wanted to! People only have what they have. This town is extremely generous and full of love and kindness. I want everyone to come to as many of my events as they can. Don’t worry about your income or if an event is the day before payday. Come! Eat! Hang out and meet your neighbors. See friends you haven’t seen for a while. Be a part of this amazing season! Your money isn’t a factor as to whether or not you’re invited. Give what you can! Buy raffle tickets. Bid on silent auctions. Buy an orchid or famous art. Reward our message of inclusion.

KA: Traditionally, candidates are not supposed to know the raised monies of other candidates. Are there ways to eyeball or gauge how far or behind one is?

Woody: AH is super efficient at keeping those totals unknown. I’ve worked there. I’ve seen firsthand. Only one person knows. And he’s not giving out clues. I wouldn’t want to know anyway. That gets into drama. History suggests that the totals that inevitably float around are either fabricated or dramatically overblown by each person they pass through. AH cautions us not to stress over rumored totals.

KA: Should additions be made to the LGBTQ flag to represent minorities or broader diversity?

Woody: Inclusion is key. If a flag with different colors, more colors, shapes, glitter or fringe makes you feel proud and included, then make any flag you want! While the original eight color flag was meant to be all-inclusive, that doesn’t mean everyone will embrace it. Fly your flag, whatever shape, color and size it may be.

KA: Were there causes you were slow to adopt within the LGBTQ movement?

Woody: All of them. I wish I had known more earlier. I try my best to seek and share information about as many sectors of our family as possible: trans rights, disabled rights, long-term survivors, persons of color, non-binary, indigenous rights, cancer, everything! It’s never fast enough. I don’t beat myself up over it. All I can do is be the most educated and culturally competent person I can be now and embrace every bit of our family with love. Love is key, but inclusion is the glue that binds us. Regret is such a burden. I’ve been late to the table on a few things in my life, but never out of neglect or spite. All I can do is try to be aware and learn. The more I learn the better equipped I am to provide support. I’m focused on what I can do here and now.

KA: What’s the last thing you created or fixed with your own hands?

Woody: Roasted corn enchiladas. They were tasty! Just ate the last one.

KA: Did you think of your hopes and dreams as you stared down at the enchiladas?

Woody: (Laughs) My hopes and dreams are in everything I create. Tasty hopes! ¦