Katie Pumphrey: painting for her life 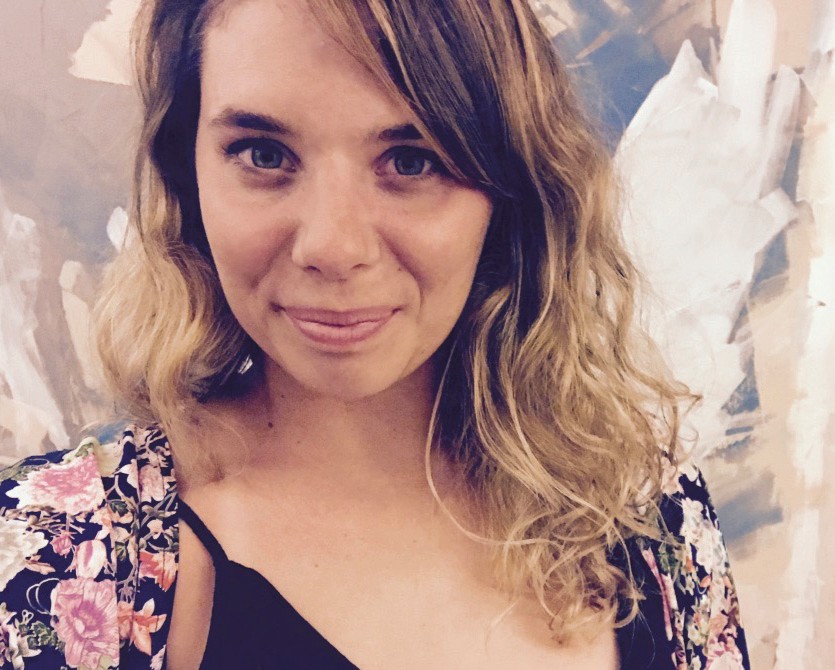 Katie Pumphrey is standing barefoot in a sunny room on Ashe Street that is literally covered in paintings. From every possible angle, paintings ranging from enormous to pocketbook-friendly are drying or waiting to be taken down and packed away. Strewn across the floor are brushes soaking in various containers of water. Canvases are hung high and low. Stacks of paper, all bearing Ms. Pumphrey’s richly pigmented brush strokes, are stacked haphazardly across various tables. She is trying to make the most of the last few hours that this room belongs to her, part of a month-long artist’s residency sponsored by the Studios of Key West, before she has to vacate for the next artist who will move in.

In the four weeks that she’s called Key West home, Ms. Pumphrey has accomplished everything she set out to do with her residency. She’s created a vibrant, ferociously abstract body of work in an unfamiliar medium (acrylic paint, as opposed to her usual palette of oils and charcoal). She has broken out of her comfort zone of using primarily oversized canvases and completed 100 8-by-11-inch works on paper, she has explored new levels of loose, expressionist painting, creating her most contemporary collection to date while enjoying the opportunity to paint outdoors on a sunny porch (she’s from Maryland, where it’s currently hovering above freezing). She has networked with local artists and secured local gallery representation, and — oh yeah, she just swam around the entire island. But more on that in a bit.

After graduating from the Maryland Institute College of Art in 2009 with a BFA in painting, Ms. Pumphrey began to explore primal themes of movement, competition and instinct through her work in painting, drawing and large-scale installations. With a progressively unstructured brush style and a penchant for depicting frenetically energized groups, Ms. Pumphrey’s work dances across a spectrum of rodeo cowboys, horse jockeys, bison herds, hunting parties and schools of fish swarming toward the water’s surface. In almost a decade of work, she has created a canon that, when viewed chronologically, begins to blur the concepts of form and content slowly, painstakingly, almost preparing her for the unencumbered collection she would go on to create in Key West this month.

She has completed residencies at the Vermont Studio Center, a stint as a resident/ co-curator at Baltimore’s Gallery Four, three years as an artist in residence at the Creative Alliance in Baltimore, and has had her work shown in multiple solo and group exhibitions.

And then there’s the fact that, between all of that, she also found time to swim the length of the English Channel.

After falling in love with distance swimming during her undergrad experience, Ms. Pumphrey began knocking out increasingly longer swims. Beginning with a series of crossings of the Chesapeake Bay, she next attempted a 7.5-mile swim of the Potomac River, which proved more challenging. “My first Potomac swim was really tough, and I learned a lot,” she says. “I swam it two more times and, during the third, while I was out in the middle of the open water … waves swelling and tossing me around, I thought about bigger swims.” Two years later, she would go on to complete a crossing of the English Channel in 14 hours and 19 minutes.

“It has certainly changed my life, my work, and will forever be a part of me,” she says. “Since that swim, I’ve wanted to make my work as terrifying as that swim. As powerful as that body of water. I’m still working on it, but I’m getting there.” In addition to the massive collection of paintings she completed during her residency in Key West, Ms. Pumphrey also managed to find time to chip away at an ongoing writing project about her English Channel swim. “It’s definitely a work in progress,” she says, “but I hope to share it someday soon.”

Staring into the hypnotizing indigo whorls of her latest sea-colored series currently on view at Harrison Gallery on White Street, it’s tempting to make the easy connection between artist and ocean. This is a woman who attempts to capture the untamable power of open water using a painting style as free-form and turbulent as the waves themselves. While exploring, through an increasingly unbridled body of work, the perfunctory fight-or-flight instincts with which living beings move through space, she also finds time to retreat to the most awe inspiring, primordial space of all, the open ocean, in order to continually test her own body’s instincts to sink or swim. It’s heavy stuff. But to simplify Ms. Pumphrey’s explosive, complicated work as such is to do a disservice to the artist (and of course, the frequency with which critics and scholars attempt to draw parallels between their personal lives and their work in order to classify female artists’ art as “personal” compared to that of men is an upsetting topic for another time).

Ms. Pumphrey’s work is less a display of her personal experience than an actively inclusive experience, almost aggressively so. She demands an emotional response from her viewer, holding them in front of her work with the same intensity that she uses to hold the subjects of her paintings in time. Her work is a freeze-frame that transcends language, holding movement up for inspection, depicted two dimensionally, with the knowledge that these moments can never really be contained.

It’s a powerful, forcefully interactive way of connecting with her viewers, of summoning universal feelings of anxious anticipation. A rodeo cowboy is poised, airborne, and we stare at the canvas with the uneasy knowledge of how the scene will progress — the bull’s hooves slamming down on the ground as the rider is bucked and flung about, holding on for dear life. A group of runners in racing numbers are lined up at the start line, tensed, and we as onlookers are waiting along with them for the shock of the starting gun, that millisecond of panic before the frenzied race to the finish line. Rendered in Ms. Pumphrey’s free-flowing hand, the pieces are less instructional than evocative. She makes you squint to bring everything into focus, holding us there as we attempt to discern why the work feels so immediately familiar even though it appears out of focus. It’s masterful stuff, really, but the artist stays lighthearted about it all.

Of all the things a residency offers an artist, time may be the greatest of them. “Four weeks here, away from my regular life, allows for experimenting and playing,” she explains, “which often leads to big leaps feeling a bit less scary to make.” While the bright colors and natural beauty of the island were formative to her latest body of work, Ms. Pumphrey says she spent a considerable amount of time exploring the diverse range of forms that her change in location afforded, paying close attention to trees, waves and rocks. And of course, the ability to spend time outdoors without the threat of hypothermia means Ms. Pumphrey was able to dive deep into her study of local movement and mass.

“I spent a lot of time watching those things move in the wind as well, studying how light certain leaves feel when they move, or how heavy the palms look when they sway, or how the waves pulse, moving rocks forward and back.” On Friday, March 10, Ms. Pumphrey was also able to complete a swim around the entire island, thanks in part to a team of new local friends willing to act as kayak and boat supporters. In total, the swim took 5.5 hours, a far cry from the more than 14 required for her English Channel swim, but not without its own complications. “I’m jellyfish bait,” she laughs. “They love me.”

Now that the pressure to create new, exciting work and to circumnavigate the island are behind her, Ms. Pumphrey can look back on her time here in Key West with clear eyes.

“I felt welcome from the first day,” she says. “People here are so kind and very excited to talk.” With a stack of 100 works on paper tucked away and a drive back to frigid Maryland on the horizon, she is adamant that her time in Key West has just begun. “I’ll definitely be back soon,” she says. Meanwhile, she’ll leave a few paintings to see at Harrison gallery. ¦ 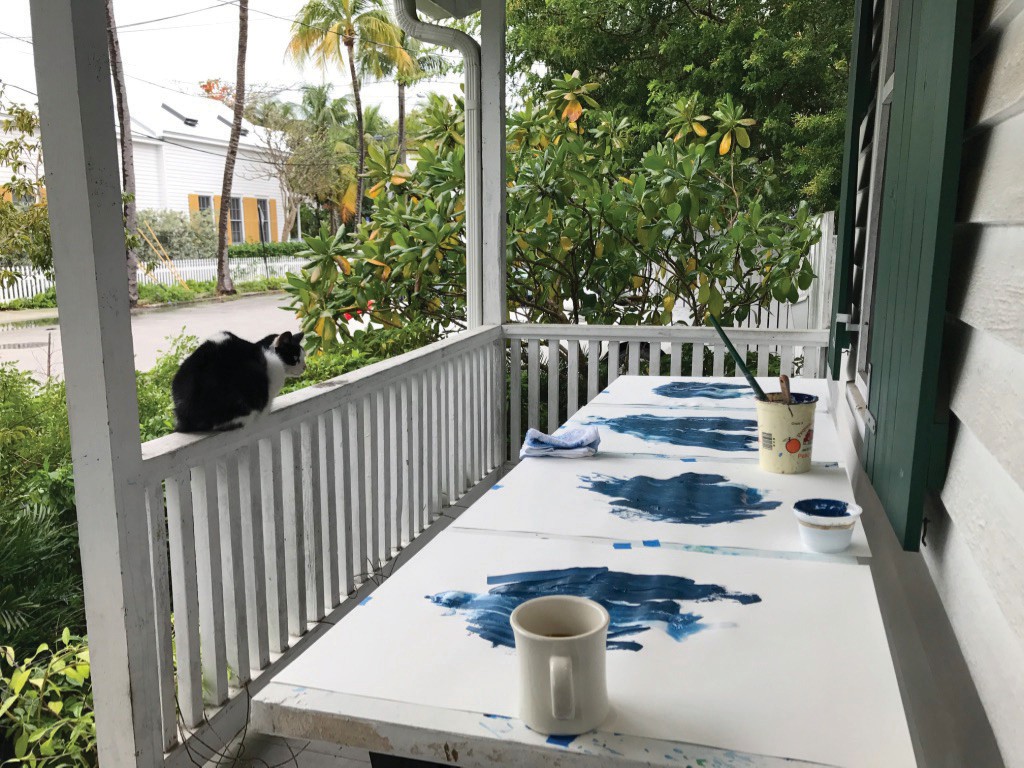 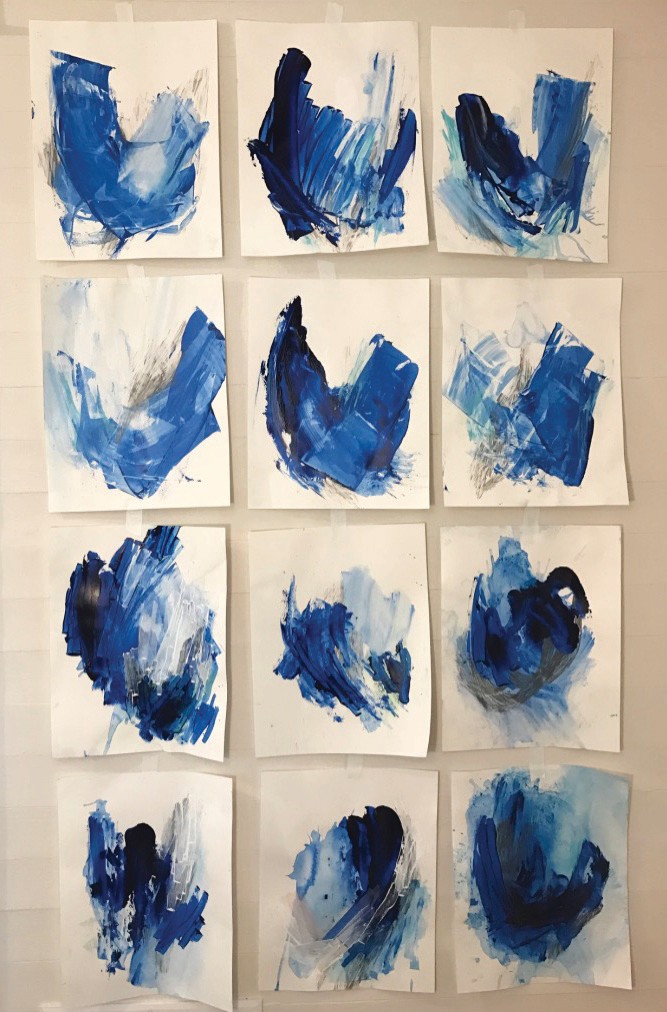 One of Ms. Pumphrey’s creations. 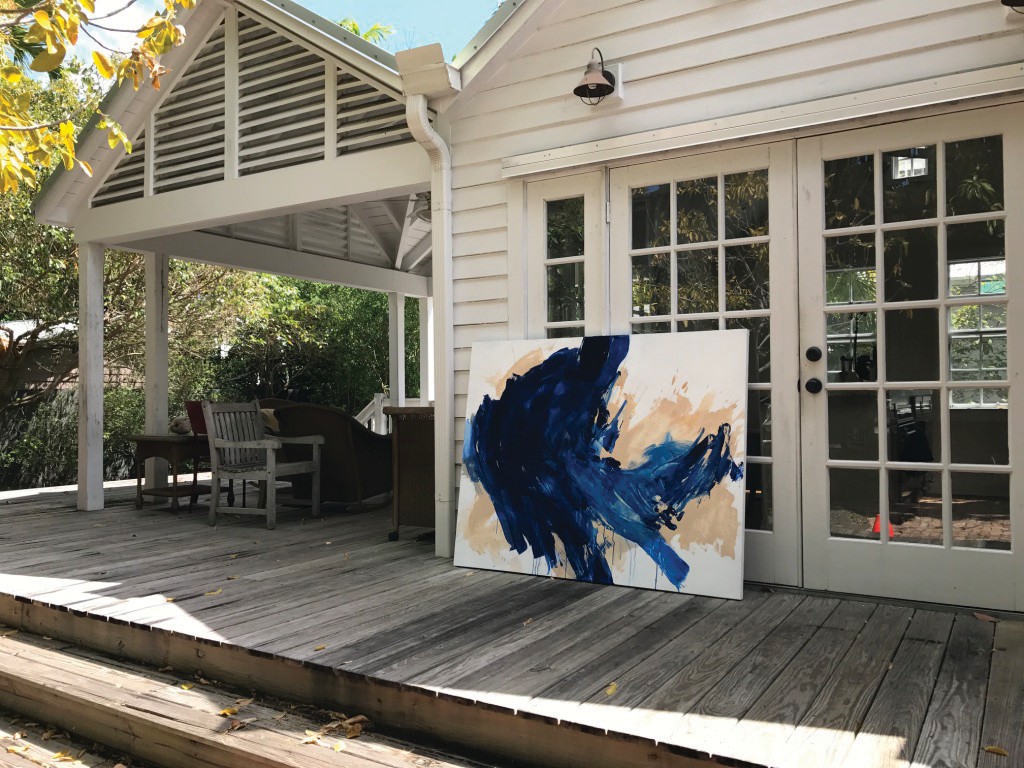 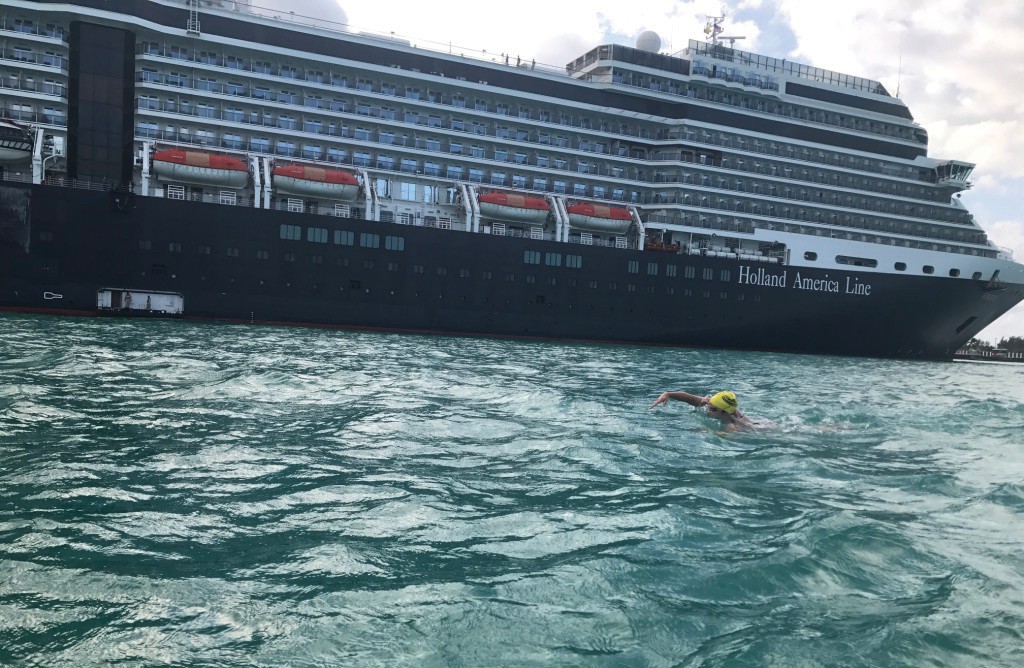 Between all of her exhibitions Ms. Pumphrey also managed to swim the English Channel. 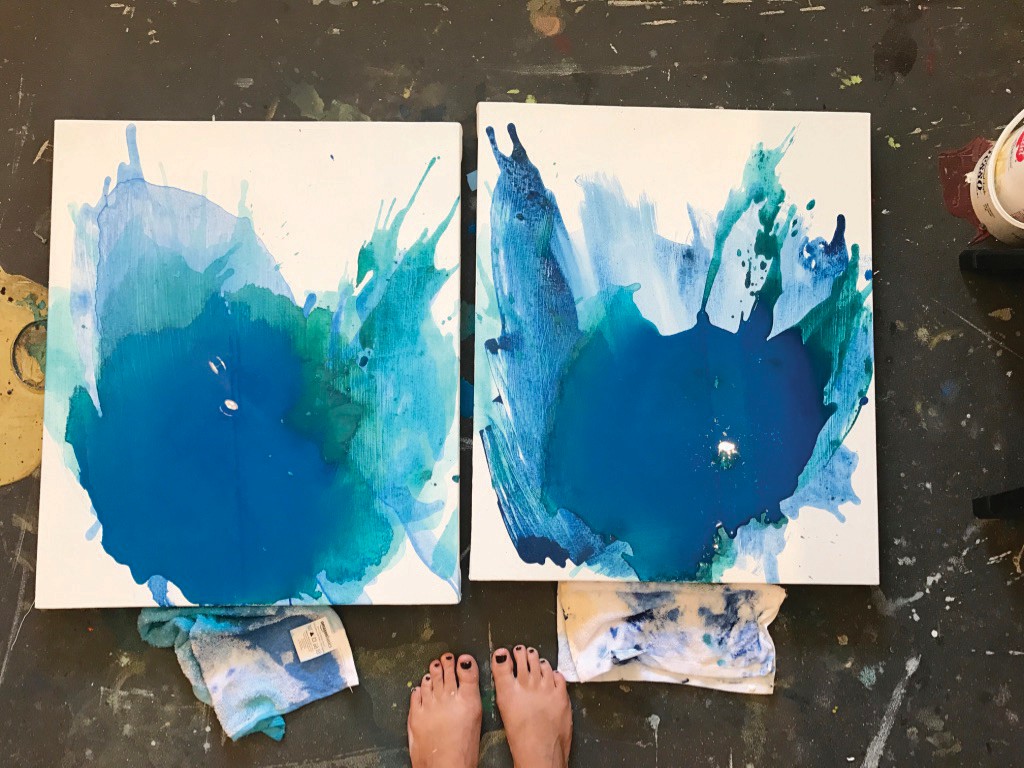 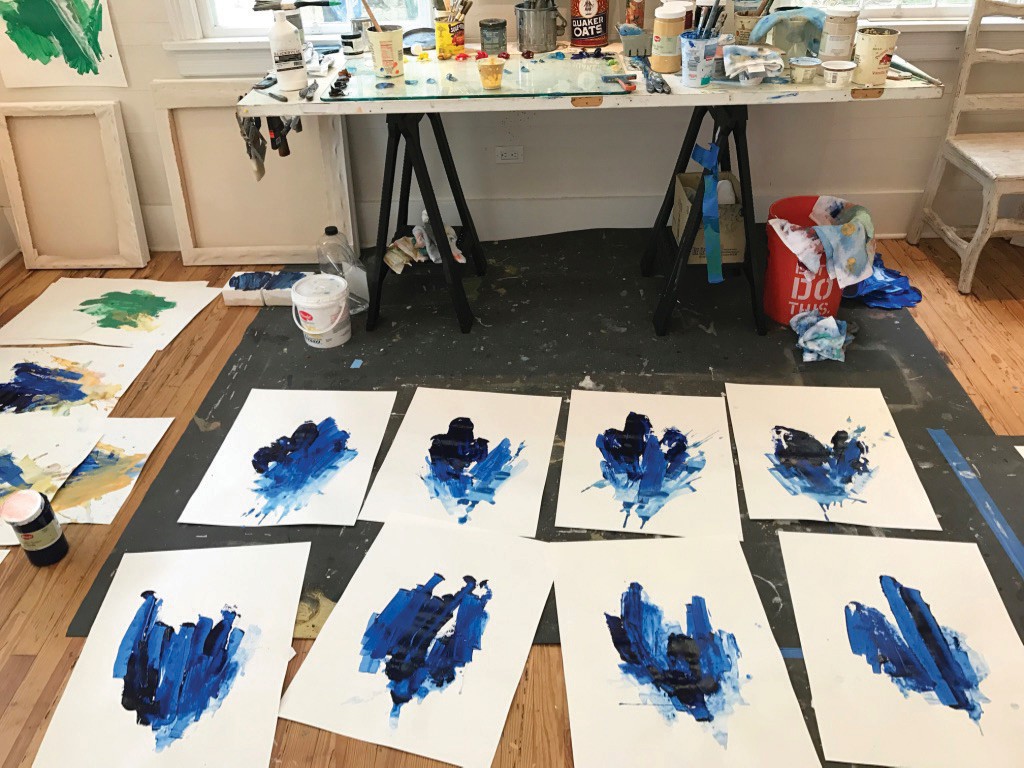 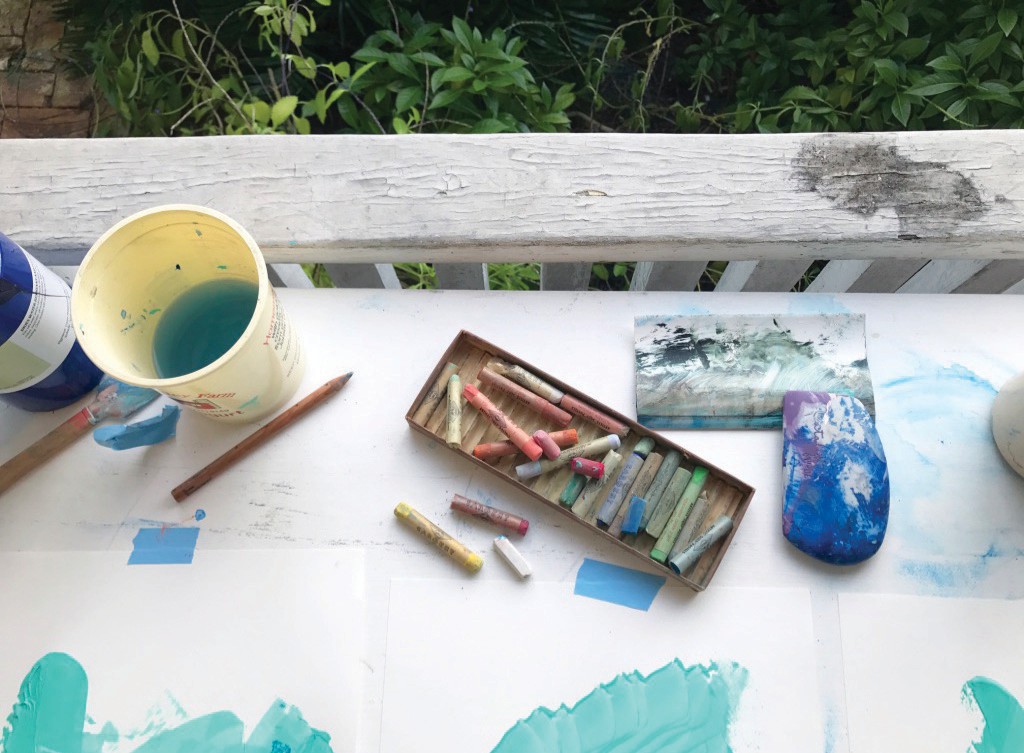 The tools of the artist.