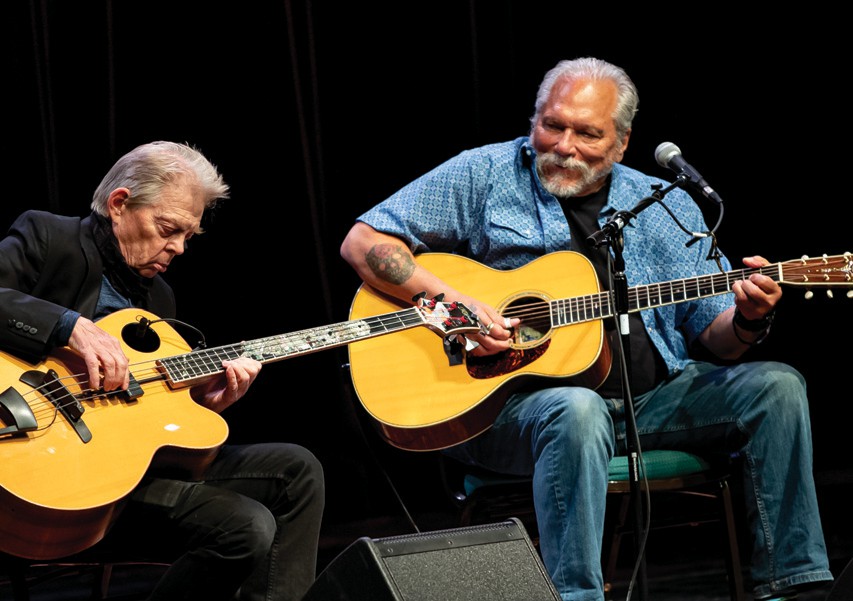 In light of the spate of music biopics and memoirs that have come out, anyone expecting lots of hot dishing when they crack open “Been So Long: My Life and Music,” Jorma Kaukonen’s 2018 autobiography, is advised to look elsewhere.

Despite the fact that the Jefferson Airplane founding member and Hot Tuna co-founder experienced his first dalliance with fame during the group’s halcyon late ’60s Haight-Ashbury days, it’s more of an intriguing and straightforward account of Kaukonen’s life path. It’s a big reason why he decided to pass on doing a project like this when he was first approached about doing it a decade or so ago.

“In the mid- to early 2000s, I had an offer to do a book with somebody else as a co-writer. It was somebody that I liked and I hadn’t really thought about it. At the time, the idea of a co-writer made sense to me because I had never really done any writing of that magnitude,” Kaukonen recalled. “But it became apparent that the publishing company that we had been discussing things with wanted all that salacious stuff we talked about that I don’t have in my book. As soon as I realized that they wanted me to dish dirt on people that were more famous than myself, I thought I didn’t want to do that. So I just shelved the whole idea. The same thing happened when I didn’t make the cut for the “Janis: Little Girl Blue” PBS special because Janis and I never had sex or did drugs together. We just played music.” 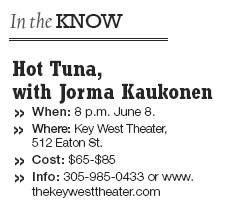 Some 50 years later, he will play music June 8 at Key West Theater.

Born in Washington, D.C., Kaukonen boasts Finnish lineage through his paternal grandparents and Russian Jewish ancestry on his mother’s side. Given that his father was a State Department employee, quite a bit of traveling framed the future Rock and Roll Hall of Famer’s life. In experiencing living in far-flung locales like Pakistan and the Philippines, Kaukonen took to keeping a diary, a habit that carried into adulthood and was an enormous boon in detailing the finite detail that flows through “Been So Long.”

“Here’s the thing, even as a kid, I liked typing because I couldn’t read my own handwriting. For lack of a better term, I always journaled stuff when I was a kid. Back in the late ’90s, I started a website. It wasn’t interactive like the ones are today. Before there was blogging, I was still journaling. I just always enjoyed doing that,” he said. “For the book, I let the process be my inspiration. So once I sat down, I would start out by knowing that I had to spend three hours that day writing. I’d sit down and maybe the first few minutes, it would be labored. But once I got into the flow, I found that I could do it.”

The book’s narrative thread is wrapped in a straightforward honesty about Kaukonen’s journey, with self-examination that touches on his addiction and self-recovery, his troubled first marriage and still-thriving current one, his musical journey, the creation of the Fur Peace Ranch Guitar Camp and the joy of fatherhood. Sprinkled throughout are lyrics that provide handy narrative bridges.

Of course, the memoir deals with his Kaukonen’s bands, most notably Jefferson Airplane and Hot Tuna. The Airplane was already well established, with several iconic hit songs to its credit (“White Rabbit,” “Somebody To Love,” “Volunteers”) when Kaukonen and Airplane bandmate, bassist Jack Casady, formed Hot Tuna as a side project in 1969.

In a sense, Hot Tuna was born before it was even Hot Tuna. The seeds were planted during a Jefferson Airplane gig at the Fillmore East when Paul Kanter asked Kaukonen and Casady to “…go play an acoustic tune.”

In “Been So Long: My Life and Music,” Kaukonen reflects on the musical freedom he and Casady found with Hot Tuna, which came to include a revolving cast of other musicians and played both in acoustic and electric settings.

“The financial success of the Airplane allowed Jack and me the wiggle room to nurse our young band through its infancy without financial constraints,” Kaukonen wrote. “It was fun and a real relief to be able to just get together with friends and play music without it being a ‘career move’!”

Hot Tuna stayed quite active during the 1970s, releasing eight albums that decade before starting a hiatus that lasted until 1986. Kaukonen and Casady have kept the group together since then, adding a pair of studio albums and several live releases to the Hot Tuna catalog.

These days, Kaukonen’s role in his Hot Tuna concerts with Casady is less of being an oldies act and more of a bard. As someone who started learning finger picking while at Antioch College and later worshiped at the altar of the storied blues/gospel singer Reverend Gary Davis, Hot Tuna’s shows are rife not only with songs from the Hot Tuna catalog, but material from greats associated with the Americana canon. Fans can expect to hear a set list populated with gems from the likes of Jelly Roll Morton (“Winin’ Boy Blues”), Blind Willie Johnson (“Keep Your Lamp Trimmed and Burning”), Jimmy Cox (“Nobody Knows You When You’re Down and Out”) and Davis (“Candy Man”). And there may even be nuggets plucked from the Jefferson Airplane (“Embryonic Journey”) and Kaukonen (“Wolves and Lambs”) catalogs.

With his memoir now in the rearview mirror, Kaukonen said the biggest gift that came out of the project was his ability to hone his narrative craft.

“When you’re blogging, you blather and let your mind run free. And that’s OK. But in a book, it’s not OK. As I started working with them, I got that,” he said. “So we were able to whip things into order. I found that I really enjoyed the process and was utterly un-self-conscious about telling my story, which would not have been true four years ago. I really enjoyed the process and when you think about writing a memoir and put down the last period, what do you do? Drop dead? I was just thinking this morning that I might want to write something else. I don’t know what it’s going to be about — I’ve already told that story, so I can’t go back. But we’ll see.” ¦