In the Sunshine State, many rally to help animals in need

It’s not just the humans who have been impacted by COVID-19.

Throughout Florida, animal shelters and humane societies have scrambled to protect their staffs and the public while continuing to provide services to animals in need during an unprecedented health crisis.

All over the Sunshine State, shelters are shut down or open in a limited capacity, employees have lost jobs or had hours cut, and animals have been placed in foster care or with rescues to minimize employee time in facilities. Shelter officials on both coasts say they do not know what the future holds, only that reopening will probably be done in phases and that some procedures and policies may change forever.

There’s been a silver lining, however. Shelter officials are grateful to volunteers, rescue partners and the public, who have rallied to help animals during the global disaster. Though monetary donations are down, people have stepped up to adopt, rescue or foster pets, and to donate to food pantries so those who are struggling can keep their animals.

“We know that financial strain on the human population impacts animals. Animals are a part of our families. When families struggle, pets struggle,” said Maureen O’Nell, CEO of the Suncoast Humane Society in Englewood.

Palm Beach County Animal Care and Control, for example, made the national news with an iconic photo of employees and empty kennels that went viral. Prior to the shutdown, the shelter offered free adoptions, stepped up its foster program and worked with rescue partners to place pets quickly, said Community Outreach Manager Elizabeth Harfmann. The results totally amazed her.

“It was incredible. I heard from people all over the world. We didn’t expect it to go that viral, but it just took off,” said Ms. Harfmann. “We were bracing ourselves, expecting a wave of animals. In a natural disaster, people panic and drop off their pets. We have had the exact opposite.”

While other shelters have also experienced a wave of adoptions and fosters, some officials do fear that the continuing economic disaster will force more people to surrender their pets in coming months as they lose jobs and homes. 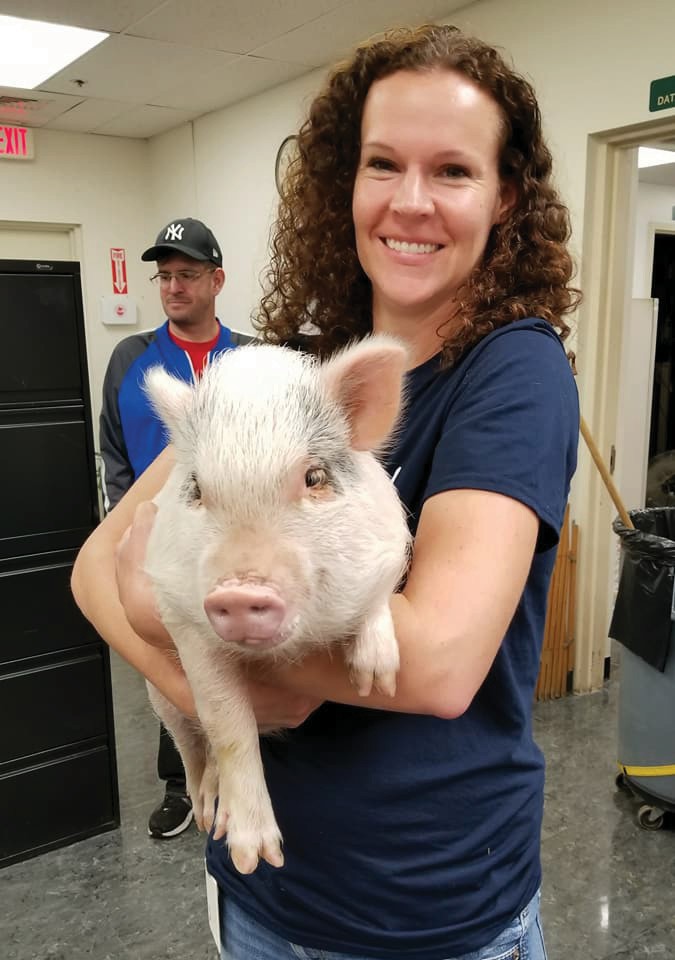 Here’s a breakdown of what’s happening in shelters on both coasts of Florida:

At the Florida Keys SPCA, Executive Director Tammy Fox said both the Key West and Marathon locations are closed to the public. “However, the team is still working in the shelter caring for the animals, responding to animal control calls and assisting the public that have business at the shelter,” she said. “We are conducting business by appointment when possible.”

Visitors are required to wear masks and abide by social distancing. Pet owners are asked to wait in their cars or the lobby while pets are receiving veterinary treatment.

The shelter serves more than 2,000 animals a year. Despite the shutdown, officials have continued to provide shelter, adoption and animal control services, do cruelty investigations, and provide safe haven programs, pet pantry services and medical services.

Though the FKSPCA has retained all of its 23 employees and is committed to keeping them employed, Ms. Fox said the facility has already felt the financial pinch of the crisis due to the cancellation of fundraising events.

“Our biggest annual event, The Spring Social, was scheduled to be held March 20. We chose to postpone … and this resulted in a projected $150,000 loss from this event alone,” she said. “The total projected loss of revenue over the four months of March, April, May and June from donations, events and program revenue is $286,000.”

The pandemic has hurt the Keys’ animal population in several ways, she said. “The unfortunate side effect is loss of income for pet owners and how that relates to their ability to care for their pets’ needs. Another side effect is the result of the moratorium on performing spay/neuter for community cats.”

Ms. Fox said the facility will reopen during Phase 2 with reduced hours and restrictions.

At Palm Beach County Animal Care & Control in West Palm Beach, Community Outreach Manager Elizabeth Harfmann is still marveling at the help her shelter has received from rescue partners and the community.

“That iconic photo went worldwide,” she said. “The kennel this photo was taken in is still empty, which is amazing as it has never happened since the building was opened in 1992. We still have 17 dogs in the adoption program and 15 cats in need of placement. Available pets can be viewed online at www.pbcgov.com/ snap.”

The average shelter population this time of year is 250 to 300 animals, she added. Summer is peak season for dogs, and kitten season is in full swing. The maximum shelter capacity is 500 animals, not including livestock.

None of the shelter’s employees has been sick, but some workers at high risk went on administrative leave. Kennel numbers are the lowest ever and the facility is functioning with a skeleton crew.

“We have 120 paid employees to run the shelter and all services we provide the community,” said Ms. Harfmann. “In addition, we have a dedicated team of 100 active volunteers/fosters who typically help us out; with the exception of fosters, our regular volunteers have not been able to come to the shelter to help due to the pandemic restrictions.”

The shelter is currently appointment-based, with no spay/neuter surgery or low-cost vet services available. There has been a huge shift to online services, including adoptions. Some changes have been so unexpectedly successful that they will likely become permanent.

Ms. Harfmann said the crisis has forced employees to be creative and flexible. The shelter briefly offered drive-thru vaccines, which worked out so well she plans to continue the service when operations resume. The shelter also has an outside “kiosk” for stray drop-offs.

Though the shelter has taken several Corona-related owner surrenders, intakes in general have been quite low.

“People want to do good, and pets bring a lot of joy,” she noted. “The community has come together. Even though we’re isolated and separated, they have rallied. Our partner organizations have really stepped up.”

Several weeks ago, for example, nine dogs were transported to a rescue in New Hampshire. All nine have been adopted.

As for what the future holds, it’s all up in the air. The shelter will reopen following state guidelines, probably beginning with offering spay/neuters by appointment, plus internal services, first.

In other parts of Florida, shelter officials report similar changes, impacts and concerns.

In Collier County, Jon Foerster, director of community affairs for Humane Society Naples, said his shelter remains open in a limited capacity. The shelter has 75 full-time employees and can hold up to 200 animals. Most animals were adopted or put into foster care before the stay-at-home order. With its clinic operating in a limited capacity, the shelter has lost an important revenue stream. Like other facilities, HSN plans to phase in a full reopening, starting with adoptions by appointment. A return to full operation is not expected until the end of the summer or later.

“The long-term ramifications of the COVID-19 pandemic are unclear as of now,” Mr. Foerster said.

The shelter currently has approximately 31 employees and 250 volunteers, with space for up to 180 dogs, 100-plus cats, and four stalls for livestock.

When the shutdown was announced, DAS received a huge outpouring of support from the community and was able to send almost all available animals to foster homes in order to limit visitors to the facility.

Ms. Somerville said shelter officials are concerned that the coming months will see an uptick in owner surrenders as more members of the community are affected by COVID-19.

In Lee County, Gulf Coast Humane Society, a private nonprofit animal welfare organization in Fort Myers, remains open on a limited basis, while Lee County Domestic Animal Services has closed its adoption and lost and found centers. LCDAS is still taking strays but its clinic is open for emergencies only.

Both shelters have felt the financial impact of the crisis, but say no employees have been sick.

“We rely on fundraising events, and those have all been cancelled,” Ms. Galloway said. “Then with the economic uncertainty, donations are down. That being said, folks have really been amazing sending us pet food donations for our mobile food pantries.”

At Suncoast Humane Society in Englewood, CEO Maureen O’Nell said her shelter is open in a limited capacity, by appointment only, with most animals in foster homes.

The shelter has experienced a 70 percent revenue loss due to the closing of its thrift stores, and most of its 42 employees, who handle everything from animal care, adoptions, maintenance and clinic duties, are furloughed.

“We don’t anticipate changes related to the pandemic, but there is also a lot that is unknown about what ‘business as usual’ is going to look like,” she added.