Images of an ISOLATED ISLAND

Photo-book tells the story of COVID Spring in Key West 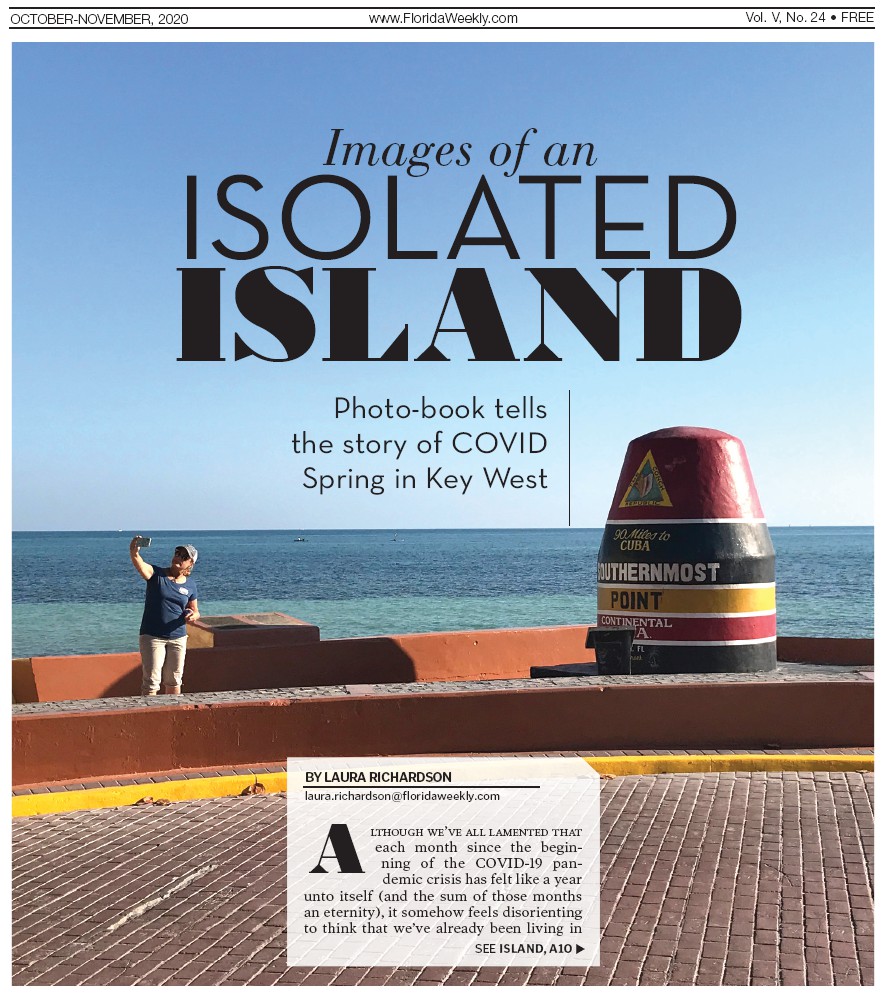 ALTHOUGH WE’VE ALL LAMENTED THAT each month since the beginning of the COVID-19 pandemic crisis has felt like a year unto itself (and the sum of those months an eternity), it somehow feels disorienting to think that we’ve already been living in this dystopian, nonfictional universe for upward of six months — half of the year gone, lost to Zoom meetings and binge-watching and bread baking.

And while the first months of the crisis may seem like a distorted dream from where we now sit, a soon-to-be-published photo-book, “Isolated Island — The Key West COVID-19 Spring of 2020,” will bring that unprecedented moment in time back into sharp focus through a collection of remarkable images shot by more than 25 area photographers.

“Isolated Island” initially was conceptualized by Key West-based businesswoman and photographer Roberta DePiero, who, during the early pandemic days, captured photo ops of the island’s stillness during her daily bike rides. She soon noticed that other photographers were doing the same and the idea of a group photo-book fundraising project began to percolate. 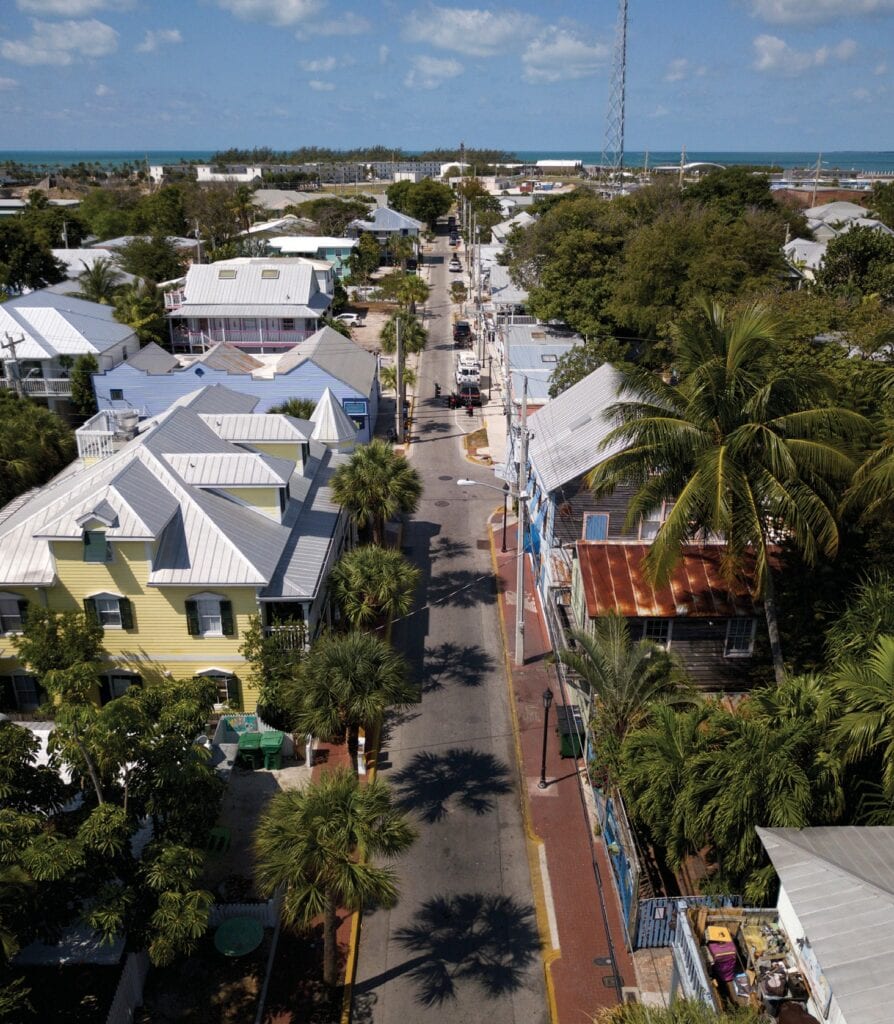 “Friends kept telling me I should do a book of my photos that I was posting on Facebook,” Ms. DePiero said. “I noticed on Instagram and Facebook that other photographers were taking photos and posting as well — some were even of shots that I had taken myself but didn’t post. So I started to noodle the idea of a book.”

Ms. DePiero tapped local photographer and publicist and former collaborator Carol Tedesco (the two published “After Life: Images from the Key West Cemetery” in 2014) to bring her idea to life. Ms. Tedesco, like Ms. DePiero, had turned to photography to combat the banality of pandemic life.

“In the very early days of the pandemic, I became deeply immersed in troubleshooting the Florida Department of Economic Opportunity’s torturous and labyrinthine unemployment system on behalf of self-employed gig workers, including myself,” Ms. Tedesco said. “The system was, and continues to be, a situation that puts this state’s highest leadership to shame. My photowalks were breaks from an effort that consumed just about every hour of every day for months.” 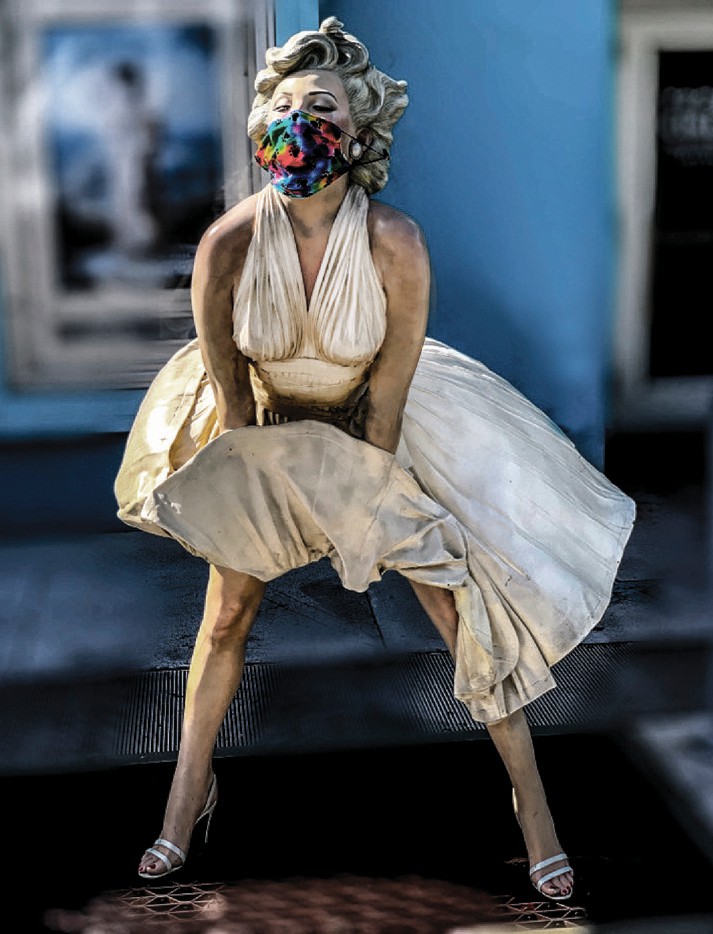 It didn’t take the women long to realize that they weren’t the only ones using photography as an outlet during the pandemic. In mid-June they began reaching out to fellow Florida Keys photographers, inviting them to share images taken during the COVID- 19 spring, which Ms. DePiero and Ms. Tedesco defined as beginning March 1, when Florida’s first COVID-19 cases were announced, through June 1, the day after the Florida Keys quarantine checkpoint initiated on March 27 was dismantled. Ultimately, over 25 area photographers contributed photos to the project.

“One of the most rewarding parts of this project was the enormous generosity of the contributors, some of whom are dealing with their own livelihood issues during this very challenging time,” Tedesco said. “I was not at all surprised by their generosity, but extremely grateful since our local photographers are among the ones who get hit on continuously to donate for local fundraising causes. The only photographers that we invited to participate and who declined were those not out actively shooting during the Key West COVID-19 spring of 2020. And, of course, there is Eric Grahl, proprietor of Egad Inc. Graphic Art & Design, who has put in countless hours on the books design and layout, and Kathy Russ, who very generously contributed her text editing skills.” 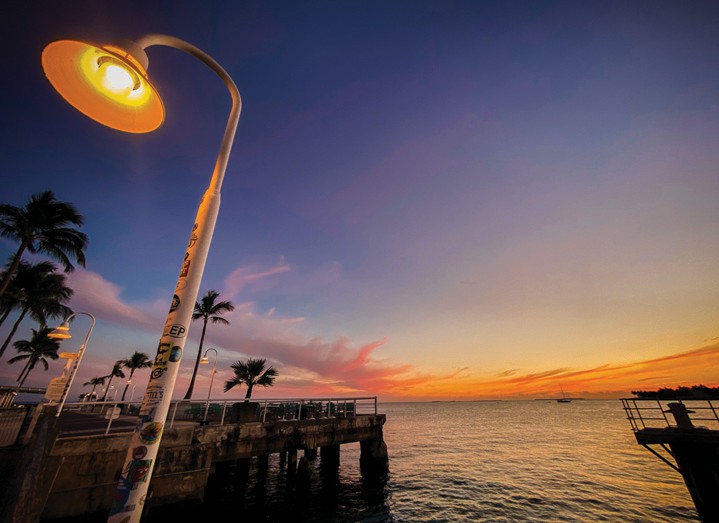 The photo-book presents each photographer’s images alongside their own words, which gave each photographer the opportunity to provide a narrative of their background in Key West and, specifically, their pandemic experience.

“For me, the most rewarding part of this project was to see all the photographers’ biographies, which we asked them to write in the first person and tell us about their time,” Ms. DePiero said. “So they are telling their own story of their time here.”

“There is so much an image can convey that words cannot,” Ms. Tedesco added. “And then, an impactful image paired with the right words has the power to become so much greater than the sum of its parts.”

For many of the photographers involved in the project, including Ms. DePiero and Ms. Tedesco, having the islands all to themselves provided a familiar landscape to photograph under unfamiliar circumstances. “There were certainly things I noticed during the shutdown that I had never noticed before, like on Southard Street at Five Brothers,” Ms. DePiero said. “Above their sign is a rooster. I drive down Southard all the time to go downtown. Never saw that rooster before. I finally asked them when they put it up and was surprised to learn it had been there a year and half already. I also noticed the quietness and calm over the island.”

“One thing I became hyper-aware of was our natural environment,” Ms. Tedesco said. “It felt so surreal and its beauty was incredibly magnified — similar to the heightened awareness of beauty one experiences after narrowly escaping death. I also became hyper-aware of contrast: the contrast between those who were able to fare with reasonable ease under the circumstances, and those who were rapidly thrust into desperate circumstances. One thing I observed, and photographed, were the incredibly long lines at the food distributions. People’s inability to access their unemployment benefits was creating an enormous strain on the usual emergency food distribution organizations.”

These latter observations spurred Ms. DePiero and Ms. Tedesco to turn their photo-book project into a fundraiser for Florida Keys residents in need. In the book’s foreword, Key West arts advocate Rosi Ware writes of the early pandemic days, “Many of us exalted in the newfound peace and clear blue waters, the cacophony of bird song and masses of butterflies, whilst others worried about putting food on the table and paying the rent.”

And when it comes to helping Key West residents put food on the table and pay the rent, local charity Sister Season Fund is arguably the most heavily leaned upon local charitable organization. So when Ms. DePiero and Ms. Tedesco gave the photographers the chance to vote for the not-for-profit that would receive money from the book, the Sister Season Fund was the obvious answer.

“Key West is a beautiful, creative, uplifting — and very expensive — place to live,” Ms. Tedesco said. “Even before the pandemic, the United Way of the Florida Keys ALICE (Asset Limited, Income Constrained, Employed) Report reported that 54% of Florida Keys families with children were already living below the federal poverty line. Sister Season fund provides a safety net for tourism industry workers who find themselves in dire straits due to illness or emergency. One of the most important services they provide is rent support to help prevent homelessness.” “With no tourists here and the governor shutting down the bars, a lot of our workers were totally out of work,” Ms. DePiero said. “Deemed ‘nonessential’ and with no income, they either had to figure another way to make money to stay here or move. Sister Season Fund is set up to help those who work in all tourism-related professions with rent and utility support and the fund’s board has been fabulously keen on making the most of its potential to provide relief for those in the community they serve. And everyone involved with our project is donating their time and talents, so all funds raised above the printing cost will support Sister Season’s mission to prevent homelessness and provide assistance for Key West’s tourist industry workers, a mission that is especially crucial now due to the impact of COVID-19.”

And though COVID-19 has had a tremendous impact on Key West and its residents, organizations like Sister Season, coupled with the island’s long-established bootstrapping mentality, enable the community to bounce back time and again.

“I think Key West’s unique resiliency in the face of natural and public health disasters stems from our isolation from the mainland, but it’s also in the fiber of the island,” Ms. DePiero said. “Key West has gone through so many changes, from being the richest city in the world to the poorest, devastated by hurricanes and now this second pandemic. Key West survived yellow fever by doing exactly what we did this time. We brought tourism here with the WPA and again in the late ’70s. It is the internal strength of each of the citizens that helps us be resilient along with our One Human Family attitude — neighbors helping neighbors.”

“Isolated Island” initially was seeded by a $1,000 Awesome Foundation Key West grant and private and public donations, but those wishing to contribute toward the cost of printing this numbered, limited edition collector’s item can do so now at www.sisterseason.com, where book orders can also now be placed. Those ordering by Oct. 31 can take advantage of a preprint special of $49 per book. Beginning Nov. 1, the price will be $74.99. Books are expected to be available for pickup, delivery or shipping on Nov. 1 or shortly thereafter, with pickup locations to be announced. Sister Season Fund will alert all buyers when the books are available for pickup or delivery.