How to lose a comedy contest in a few easy steps 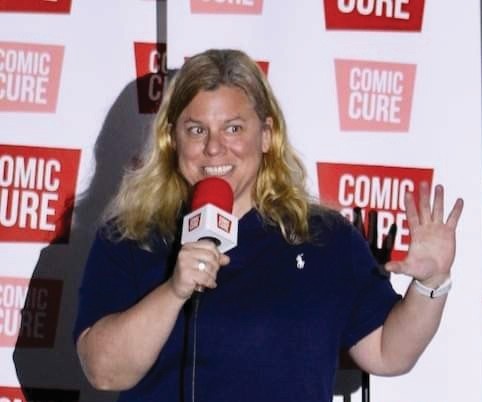 So, it turns out I’m not one of “Florida’s Funniest Females,” as one Bocabased comedy festival let me know. Maybe I should not have told that joke about a serial killer putting my head on a stick.

Let’s back up a bit.

Three years ago, locals Joe Madaus and Anne Walters created Comedy Key West. It was a pop-up comedy club that quickly landed a headquarters at the Bottlecap. They let me take the stage one night and I was hooked.

I still can’t believe I became one of the regular stand-ups. My gratitude to Joe and Anne and booker Tom Dustin grows larger each time I grip the cordless microphone to sling some jokes.

Comedy started as a side hustle and evolved into therapy. So when a comedy festival beckoned with a contest, I decided to take a shot. Stephanie Kaple and I made the cut of 16 women from across the state who would compete.

Kaple, a pal and an exceptional comedy writer, prepared as if she were up for a Nobel and did her competition sets repeatedly on stage. I ran my set over a few weeks at home and for a couple pals. But when I performed at the Bottlecap, I preferred telling jokes that weren’t “late-night TV clean,” as the contest required.

Kaple was right. She placed as the runner-up, hailed as the second funniest female in Florida. The winner would be a lesbian. That’s my thing, lady! There were four lesbians in total. Who knew?

We got three minutes to impress the judges and the audience, which also got to vote. Audience voting makes me feel like I’m in the Hunger Games. Five finalists were chosen to immediately perform five-minutes sets.

Not me. Maybe I was the 12th funniest female out of the lot. It was a wonderful event benefiting charities and I met some impressive comics. Key West represented and went home with one finalist.

I learned tough lessons: Stick to the plan. Don’t change jokes midstream. Don’t get psyched out when another comic uses your exact same opening line.

“I know what you’re thinking,” I like to open with. “You’re thinking, ‘Polo shirt, khakis, sensible shoes … she looks straight!’” It usually draws laughs and sets up jokes about my family’s bafflement at my gayness. Getting called sir. Being chased by straight women.

Yeah. I panicked. “I can’t say that now,” I babbled to Kaple. Like a cat who forgets everything he knows about the world and darts into traffic mindlessly, I changed the whole opening.

We decided I should go with another opener: “Hi, straight people! What am I? At Publix?”

I got decent laughs the rest of the time. But when I stepped off stage, I knew I’d blown it. Like that cat in the street. In contrast, Kaple was a dream on stage — confident and accessible to the crowd with wicked funny jokes about Hello Fresh, keying a neighbor’s car and deciding to torment her friends by hosting a “destination funeral.” Cheers to her.

But no one seemed to know what to tell me. “I’ve seen you be funnier,” a friend of Kaple’s confided. “You didn’t bomb,” an attending friend assured me. Two strangers told me it’s difficult to present oneself in three minutes. All of these sounded like condolences. And all of them could have waited a few days. Ouch!

“Shake it off!” someone texted from the audience. Eh! I shook it off. Eventually. Kinda. I congratulated the winner as if we had both clashed in “Gladiator.” I returned later that week to Key West and the Bottlecap and slayed a Fantasy Fest-drunk crowd.

Pals were supportive and reminded me that maybe everything doesn’t revolve around me. “Ohhhhh,” I said. “Keep forgetting that.”

What about that head-on-a-stick punchline? “My mom can finally tell her friends, ‘I met a man! … And it’s serious!’” ¦