How Fantasy Fest could look in 2022 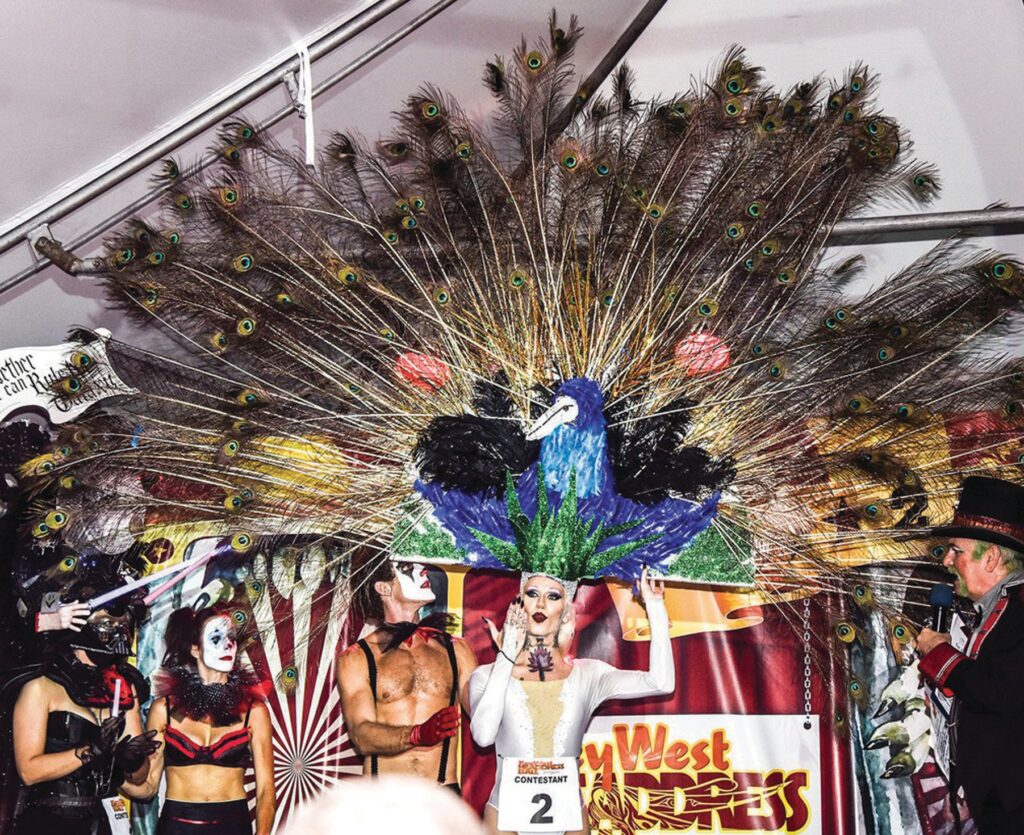 Costumes for potential Fantasy Fest Royalty can be multilayered and quite elaborate. COURTESY PHOTO

Fantasy Fest continues to face disruptions in light of the ongoing pandemic. For the second year in a row, marquee events during the weeklong celebrations have been canceled or indefinitely postponed.

Even the separate royal campaign and fundraising juggernaut of AH Monroe, which has raised millions for health and housing needs, was called off hours before kickoff. The momentary pause has provided residents with the chance to consider the evolution of the festival and campaign. Are there sweeping changes or tweaks that would satisfy our balance for growing creative needs and local industries?

I love Fantasy Fest! The parade is probably my favorite day of the year. It’s my own personal holiday. I live for interacting with the crowd and seeing the joy on people’s faces. I can’t see it evolving because it is and always has been just pure joy for me, my friends, and this community. As far as the royal campaign? It’s remarkable that people put so much time and effort into raising all these funds for those in need. We are such an amazing community. I don’t think people realize how all of these silly, fun, outrageous events change people’s lives and allow them to live in a place without fear of who they are or how they can survive.

The biggest drawback of Fantasy Fest to me is the huge number of day-trippers bused down from the mainland on Saturday for the parade. They set up camp all along Duval Street very early, taking up the entire front row of the parade route making it hard for the people who have paid for hotel rooms to watch the parade. They mostly bring all of their own food and drinks, therefore not contributing to the local economy. They leave behind a tremendous amount of trash and the dozens of buses pollute the air as they run their engines all day long. I think we have somewhat addressed this but perhaps taxing the bus companies or enforcing paid parking in a designated area outside of Key West could help. We could charge charter buses an entry fee just like cruise ship passengers. At least they’d be contributing in some form rather than being a costly nuisance.

As the 2018 Fantasy Fest Queen and supporter of AH Monroe, I am primarily concerned about the future of the Royal Campaign. “The Royals,” as we call the former Kings and Queens, are fiercely protective of AH Monroe. That is why we each worked so hard during our own campaigns to raise funds. While I understand and support the decision to cancel the Royal Campaign this year, it did result in major disappointments for the current candidates and their teams. I would like to see those four people receive some recognition for all that they have already done and perhaps some special consideration if they choose to run again next year. I also support the agency’s decision to be more inclusive and incorporate a few select nonprofits to join in the fun and fundraising. I was looking forward to that this year. I hope that will continue in the future campaigns.

I just came from the Florida Realtors Convention and it offered a hybrid model. There were in-person events for the people who felt like doing in-person and people could join virtually, if they felt more comfortable. We had more participation that way. I think that translates to a lot of things, including Fantasy Fest. A hybrid event would be fantastic. I understand AH Monroe is health-oriented, so in-person may not be the way. A virtual event that could reach more people is the way to go for the royal campaign and get people involved around the country.

I would make Fantasy Fest more family-friendly and market to a new audience. Put the emphasis back on the creativity and not (the Players Ball) and such. The masquerade march makes it more cost-friendly and inclusive. Encourage a wider range of local artists to participate. Do you want to make money and force actual penalties for nudity and openly sexual acts that are performed during Fantasy Fest? That’s one way to increase revenue not only for the businesses but also for the city and county. It’s time to bring in some of this fresher artistic talent, while keeping the wisdom and lessons from those that have proven fiscally successful.

For our group, which has grown from five to 75, the Fantasy Fest Parade is the culmination of hands-on creativity. We start with a core idea, which continues to bloom and grow as the months of production progress. No idea is too big. No detail is too small. Our collective goal is the roar of the crowd. Every year we try to go bigger, cleverer, and more creative than the year before. While we long for storage or a workspace someday, we believe that there is always room for more feathers, sequins, lights, and glitter. Fantasy Fest isn’t about what’s been done before—beads on a flatbed — it should be about what hasn’t been done yet. We always strive to bring back height and I’d really enjoy the challenge of moving parts if we had a place to build and experiment. It’s sad there aren’t places like (warehouses or workshops) available for people to create — where things won’t get wet, stolen or tampered with.

It would be nice to have more of a live presence on social media. People all over would be able to see the beautiful costumes, headdresses, and events. It would also be nice to have a virtual tour of vendors and the candidates running for Fantasy Fest King and Queen. We are in an age of technology with events happening around the globe. This is one way we can stay connected and feel that we are still one human family at a time when we have been divided on occasion.

A bigger, better Plan B

I spoke with AH Board President Christopher Elwell on Coronation Night after Hurricane Irma in 2017, when the King and Queen campaigns were suspended for nearly a month because a majority of Key West evacuated. I told him that the very first Fantasy Fest King and Queen were decided at a fundraising party — a one-night event. The candidates ran around the party, trying to raise as much money as they could. At the end of the evening, the totals were counted and the ones who raised the most were crowned King and Queen. Of course, it’s evolved into a much bigger animal today, but having a Plan B like a fundraising one-night-only gala, would be a simple and less grueling solution, should a crisis occur that ceases normal campaigning. I’d also like to find a way to incorporate more local charities into the mix like 2020’s Community Wins solution. They’re slowly starting to — this year, Aqua Idol was to include a multiple charity split. It would bring more candidates into the mix, more money for charities, and keep the tradition of Key West Royalty alive.

You can’t dictate the theme to (Fantasy Fest). But, why not include the community more in choosing a theme? There are very creative minds out there who can submit stuff to Fantasy Fest. What Fantasy Fest can do is take the top three and have the town vote similar to the Bubbas Awards. Then the town feels like it’s involved and will spend money on promotion. Allow every event that happens underneath—tutu, red party—do a twist of the main theme. If in 2020 the theme was just The Roaring 2020s instead of The Roaring 2020s and Future Fictions, we could have done a Prohibition or steampunk party. Each event could have had a version of the roaring ’20s. But when the theme is so abstract, it’s lost. ¦

— Grant Portier, owner of Poké In the Rear