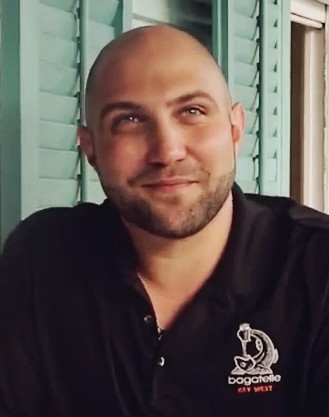 You might guess from the style and presentation that the award-winning Bagatelle and Nine One Five restaurants are connected.

Still, many may not know that one name in particular unifies both, plus First Flight Island Restaurant and Brewery: Damian DeAngelis.

He is a modern success story out of the Key West food and beverage gauntlet. It’s impressive to steadily run one establishment here. But three? And three widely frequented ones at that. In this interview, DeAngelis talks about steadily advancing through the industry, his rationale for acquiring some of the best known island eateries, and creating his increasingly popular and upcoming “Gatsby”-themed New Year’s Eve celebration.

What was the most memorable meal you had on the island when you first moved here?

DeAngelis: When I moved to town, I was only 21 years old, very new to the restaurant scene, and by no means even close to a foodie. So, what I remember most is just being overwhelmed by the amount of good fresh food, especially seafood, that was available. New food I hadn’t heard of, but is now almost commonplace 19 years later. Things like mahi-mahi, swordfish and conch fritters. It was just so fun to try new things, especially items I knew were from the Keys waters. It really inspired me to get out on the water and explore. I was quick to get dive certified when I moved here. There was just so much to experience. 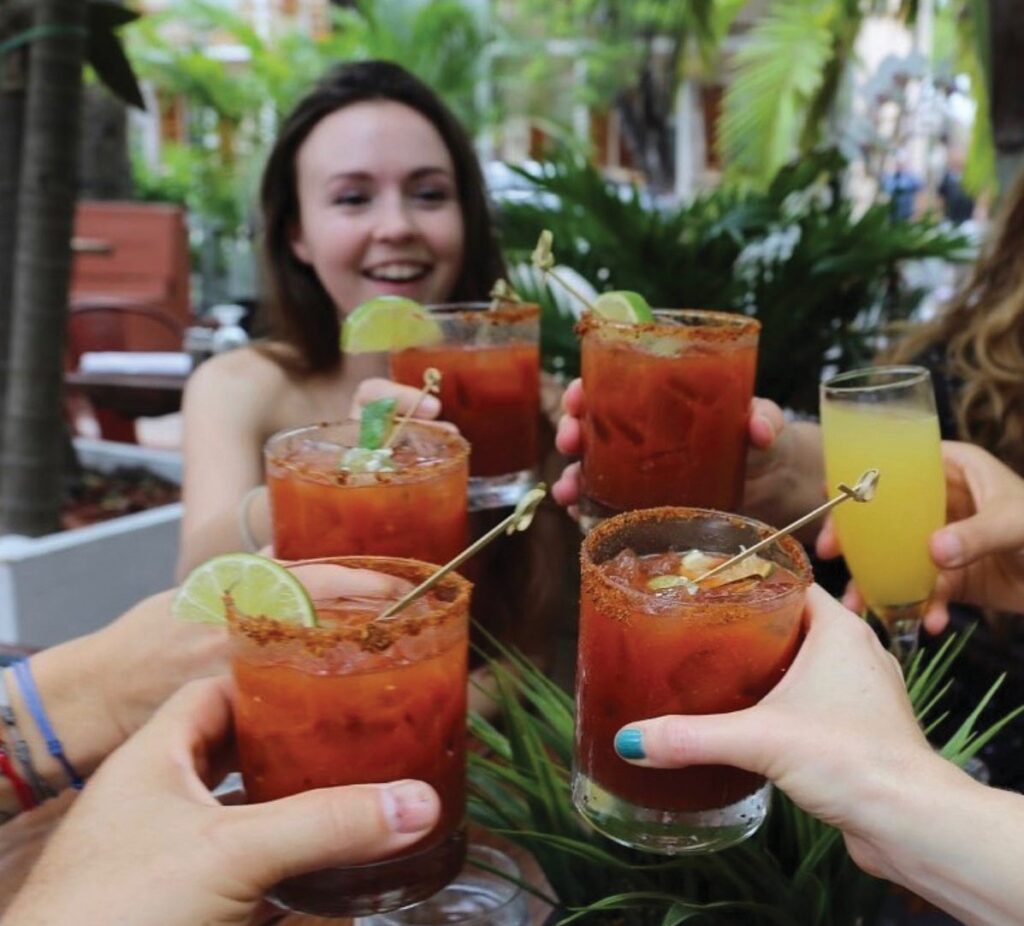 Patrons raise a glass at First Flight, situated in the original Pan Am building in Key West.

What prompted the move? How did you make it work early on?

DeAngelis: That’s a fun story really. Myself and three friends got an old RV back home in New Hampshire. We did a little work to it — changed the tires and spark plugs, packed up, and decided to head as far south as we could. So, down Route 95 all the way to U.S. 1 and ended up in Key West a few days later.

What was supposed to just be a quick few weeks turned into a four-month trip. All four of us lived out of the RV and found odd jobs in Key West. My first job was renting jet skis. What a perfect job for a young kid from New Hampshire. I had never even ridden a jet ski before that. 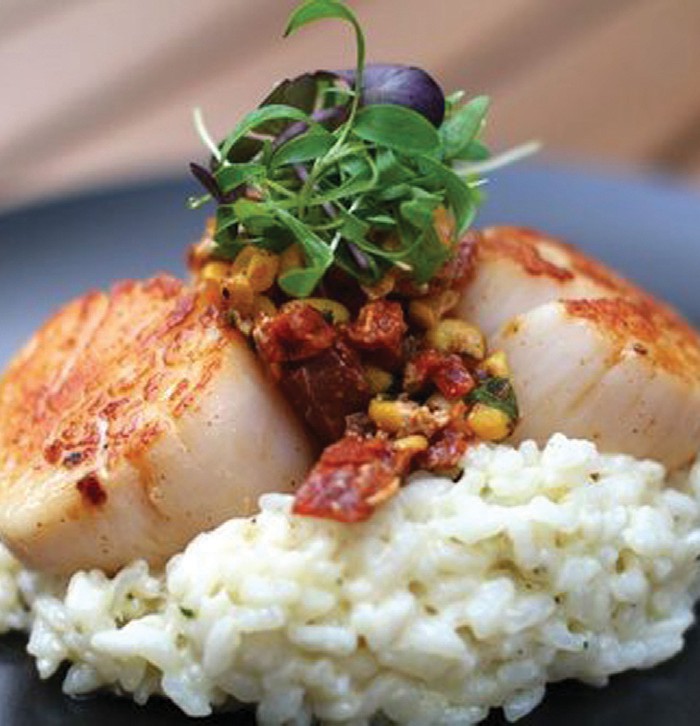 After the four months in the RV we decided to take it back to New Hampshire. It wasn’t even a year later that three out of the four of us decided to make the permanent move back down and see what Key West had to offer.

At what point did you start thinking about working in food and beverage? What were your favorite spots back then?

DeAngelis: After taking the RV back to NH, then deciding to officially make the move to Key West, when I returned, my jet ski job was no longer available. I had no interest really in getting a food and beverage job. However, I was young and needed some money. So, I saw a brewery on the corner of Whitehead and Caroline Street, which I now own. Back then it was called Kelly’s Caribbean. 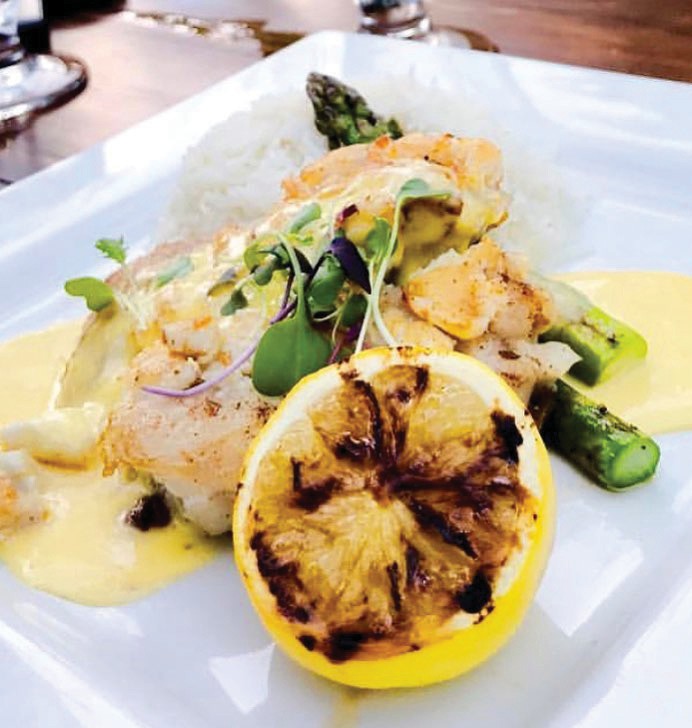 They took me in as a green server, totally new to the restaurant business. I fell in love! And quickly excelled to bartender, then manager.

My friends and I were still so new to the restaurants, so we liked the casual atmospheres. We liked Caroline’s Café, right on Duval. Jack Flats for sporting games and good bar food. There used to be an Irish restaurant called Finnegan’s Wake. That was a great hangout, too.

How difficult was it to make the jump from manager to owner here? Brick and mortar business owners in particular often talk about how challenging that process can be in Key West.

DeAngelis: The process to acquire your own place in Key West is definitely not easy. But if you are determined and put you mind to it, anything can be done.

After running the food and beverage program at the Southernmost Hotel for about seven years, I realized it was time to move on. I was confident in all I had learned and was ready for a place of my own. I was lucky enough to get some word of mouth insight that Bagatelle was available. 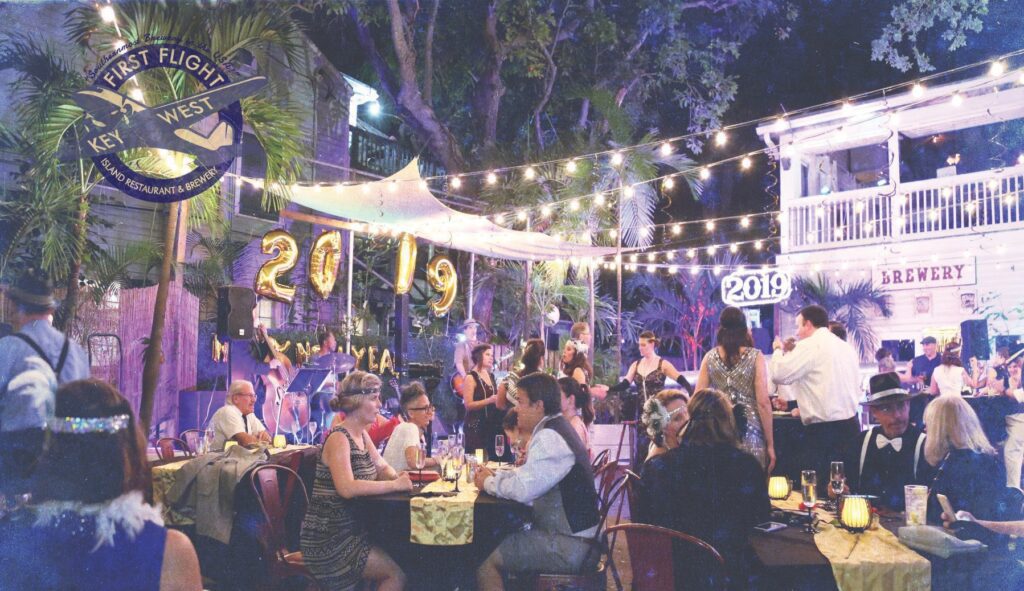 Again really anything can be done. I have a great friend who is also my business partner, Tom Boles. He and I reached out to Bagatelle ownership, and through a few months of back and forth negotiations we were able to strike a deal.

As the operating partner, once I was in there, I knew there was a lot of work ahead. Buying a restaurant isn’t cheap, especially in Key West. So, there was a lot to lose for sure. But hard work, focusing on quality food and beverage as well as upgrading décor, advertising, and of course exceptional customer service [made] Bagatelle a quick success.

Is opening a restaurant or small business in Key West anything you would advise someone to do today given the past few years?

DeAngelis: Easily said. Absolutely! It won’t be easy. There are staffing issues, real estate is expensive, and food costs are higher than they have ever been. But, if someone feels confident and they are following their dreams, I would never want someone to hold back.

How did you decide that one restaurant was not enough? What came next?

DeAngelis: It just kind of came naturally. I had been running Bagatelle for about two years. I had a great management team in place. I knew if something came up, I would be able to dedicate time without Bagatelle suffering. I had heard through word of mouth that Nine One Five may be available for purchase. I called the owner Stuart Kemp. It took a few months, but we were able to work out a great deal. I also felt like Nine One Five was a great fit, complementing Bagatelle without competing directly.

That brings us to First Flight. How much of a departure is it from the other two restaurants? Is it the one you always had your eye on?

DeAngelis: I wouldn’t say any of the restaurants cause a departure from the others. But it, too, is a great complement to the trio. I definitely have always loved the First Flight property, from way back when I worked there. I also have a natural connection, with it being the first property I ever worked in the restaurant industry. So, yes it has always been on my radar for sure!

Were you ever at serious risk of losing one or more of your restaurants during the pandemic and subsequent shut downs? How did you keep your businesses afloat?

DeAngelis: The onset of COVID was without a doubt the toughest and scariest time of my 15-plus years running restaurants with the shut down and so much unknowns. When will we reopen? How long will the roadblock at the top of the Keys stay in place? Will we ever have mass tourist events again and so on. So, of course along with those thoughts, comes how much can we withstand before considering closing for good. But, luckily, Florida bounced back quick. My restaurants have a pretty solid reputation so, once the doors were open, guests were there and ready to dine. We kept the businesses afloat by just being smart. Running limited menus with limited staff so we could reopen with cost controls. We then grew our staff and menus as we saw volume increase.

Why develop First Flight into a New Year’s Eve destination?

DeAngelis: My team and I came up with that concept. Key West has an abundance of great parties. Where you can stand shoulder to shoulder. Or in the street with a drink in a plastic cup.

But there really is not a party, where you can dress up, feel exclusive and have a throwback style formal New Year’s Eve party to ring in the new year. We thought that with the history of Pan Am in the ’20s and the layout of our property with the two-story balconies and the large garden, let’s bring a roaring ’20s Gatsby-style party to Key West. Where the guest list is limited to allow plenty of elbow room. Space for guests to dress up and feel special. As well as excellent food and beverage, like oysters and filet mignon.

Then we thought, let’s add a throwback band and décor, and have ourselves Key West’s only Gatsby party. On top of that, guests are a few steps away from Duval to keep the party going after midnight should they choose.

Additionally, with the history of Pan Am, we thought, we needed to drop something at midnight. So, we had a local artist design a replica Pan Am plane that we attach to a lift and land at midnight. It all came together to create a one of a kind party!

Any particularly memorable moments from past NYE events at First Flight?

DeAngelis: Lots of great memories! We have a photo booth, so there are lots of fun people taking pictures. We put a ‘stewardess’ in the plane when it lands and that’s really fun. But the best memory is definitely the very first year we did it. I got a call from CNN and they wanted to feature us on the newscast. So, I waited with the news anchor watching the TV as Anderson Cooper introduced us! We then got to show the world First Flight’s very first Gatsby party!

The Atlantic or Gulf side of Key West? Both are beautiful. Gulf side if boating or joy riding. Atlantic for fishing.

Favorite local cause? Sister Season is great! It supports the service industry when they fall on hard times like an injury causing [unemployment].

Best advice for new residents of the island? Enjoy and explore. So much to do in this beautiful town. Don’t get stuck at the same old watering holes.

Dish you crave the most from New Hampshire? Lobster! Nothing beats fresh Maine Lobster. ¦

— Interview has been edited and condensed for clarity.

One response to “How Damian DeAngelis took Flight in Key West”