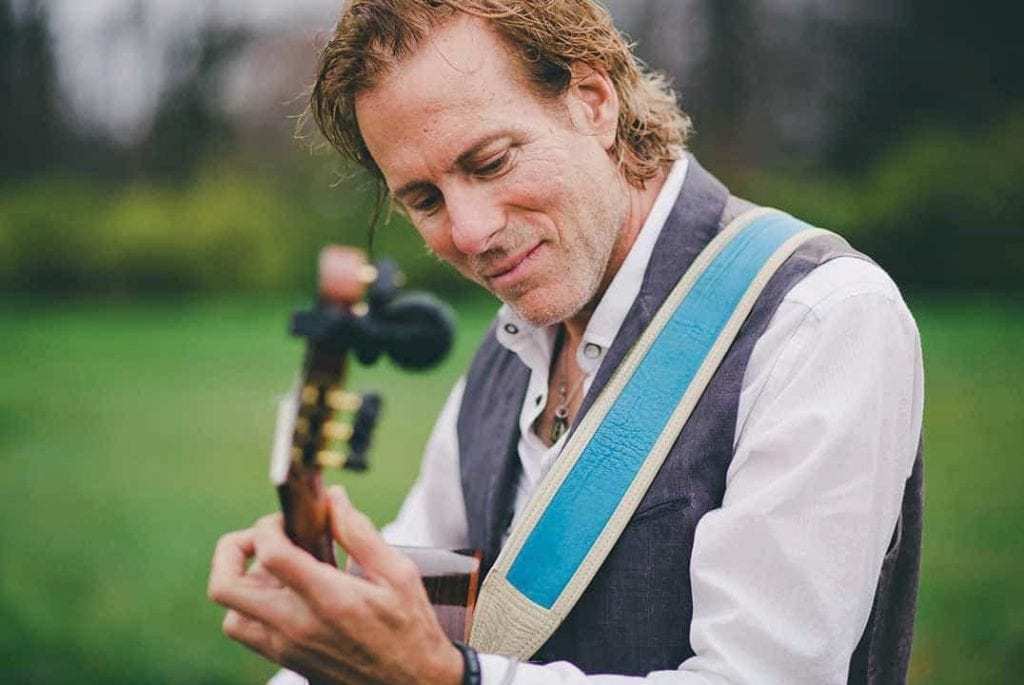 When guitarist and songwriter Peter Mayer isn’t playing sideman to Jimmy Buffett, he fronts his own band and releases his own albums. Mayer, who has survived the music biz for more than 30 years, loves both roles.

“I get to make Jimmy sound as good as possible and that’s really fun for me,” said Mayer, 61, a St. Louis, Missouri-bred musician who has called Nashville home for 20 years. “But there’s nothing like being in front, singing the songs you wrote, meaning it and once in a while getting people to light up and say, ‘That made a difference to me.’”

Mayer is lead guitarist for Buffett’s Coral Reefer Band and has played with the creator of trop rock since 1988. But Mayer has his own band, more than a dozen albums to his credit and, in 1999 with his brother, started a yuletide tradition to share through a special Christmas tour.

Mayer’s Christmas tour, “Stars and Promises,” which is marking its 20th anniversary this year, will make a stop at the Key West Theater on Dec. 3. “The band I travel with is incredible,” Mayer said. “We don’t do pyro, but it’s a fantastic band.” 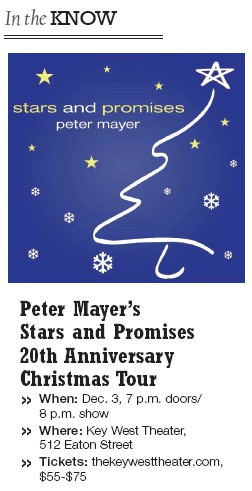 Over the years, he and his seven-piece band have played a mix of the traditional — “Have Yourself a Merry Little Christmas,” “Angels We Have Heard on High” and “O Come O Come Emmanuel” — along with his originals.

Mayer is one of those people who get misty-eyed about Christmastime, seeing it as a time of hope and reflection. “It may sound cheesy and sappy,” said Mayer of the holiday season. “But there’s something about that time of the year when people are willing to take a look at their lives and see what they can give to others.”

Mayer has a storybook-like childhood tale about his father that inspired one of the tour’s songs, “A Junkman’s Christmas,” an original composition he and his band will perform as part of the special holiday show. “When I lived in India, it was 110 degrees at Christmastime and my mother would set up huge Scotch pine,” Mayer said. “It was just a magical time. Many kids love Christmas for that part of it. I love the music, too. The music was evocative. Peace on Earth. It took root in me.”

“A Junkman’s Christmas” comes from Mayer’s memories of growing up in India from birth to age 8 while his parents were Lutheran missionaries. One year, a 4-year-old Mayer, one of eight children, tore open a present. Then he burst into tears when he realized there weren’t more gifts awaiting him.

His father sprung into service, running into his office and sifting through odds and ends. “He grabbed some trash, like an old lighter,” Mayer said. “He just started forming little toys and tools. He wrapped them in newspaper and gave them to me. It’s one of my happiest memories of my father.”

As Mayer tells his audiences, his father grabbed a typewriter ribbon and made a toy. He made pipe cleaners into little figures. And then he brought them to his children, saying they were presents he had “forgotten” about.

Mayer said the story grew into a life lesson. “It’s been a theme in my life: nothing is too far gone, broken or used to be of purpose,” he said.

In 2018, Mayer turned the story and the lyrics to the song into a children’s picture book, “A Junkman’s Christmas Eve.” For “Junkman,” the band has been known to use household items as instruments, such as a saw, a piece of wood and water bottles.

Mayer is Christian and he says some of that will come out during the performances. But the show is definitely for everyone of all faiths or none, he said. “We worked hard to make it an inclusive time where people can just come and be uplifted, in contrast to what the world is going through,” Mayer said. “We wanted to provide people a chance to get off the streets and the ‘Black Friday’ blood running through their veins and just get into the season in some other vehicle of hope or peace or joy. In that sense, it is spiritual.”

Mayer said this is the first time he has brought the Christmas tour to Key West and is excited to play the Key West Theater, which he called “a storied theater everybody plays.” “We never get that far south,” Mayer said. “This year, we’re doing it.”

Mayer lived in Key West for three months in 1992 and is fond of the island. “It’s a cool and complicated place,” Mayer said of Key West. “It’s like, dealing with the growth it’s gone through in 10, 20 years.”

Before Nashville, Mayer spent 35 years in St. Louis, where he broke into the music business. He studied theory and composition and went on to teach jazz guitar as a faculty member at Webster University. In 1988, he released his first album for Warner Brothers Records with the group PM. The record sent a single, “Piece of Paradise,” to No. 8 on the Billboard charts.

The same year, Buffett was putting together a band for a new album and his management team had heard of PM. Buffett snapped up Mayer as his lead guitarist. “Jimmy was going through a time in the ’80s where he needed a transition,” Mayer said. “We just lost our record deal. That one album turned into 30 years.”

Mayer admires Buffett as a musician and a businessman. “Jimmy is not only a great entertainer but a great songwriter,” he said. “He’s got incredible musicians in that band. Jimmy’s smart. He just goes out and has fun and makes a great amount of money. He does it smart.”

Mayer has been playing guitar since he was 12. Now he’s the father of a 30-year-old guitar player, Brendan Mayer. Having his son follow in his footsteps gives Mayer mixed feelings. “It’s a thrill, but it also makes my stomach go sick every time I think of the business and how raunchy it can be,” said Mayer, who recalled the rough days of being stuck in a van with bandmates eating Taco Bell.

But Mayer says playing music is a calling. “If you get that call, you find a way to make sense of it,” he said. He credits his friends and family for his career’s longevity. “Friends who kept saying, ‘Don’t waste this, don’t give it up,’” Mayer said. “When I made a stupid decision or got off track, they’d get me through.”

Mayer received the call as a kid and he says it has persisted through the decades. “It’s the call that keeps you having to come back to it,” Mayer said. “A tone or a lyric gets you and you’re like, nothing makes me feel that way.” ¦

We are all in this together and we are all watching — togetherRead a bookFriendships in strange places, Looney Tunes, lucky grandmas and more on tap