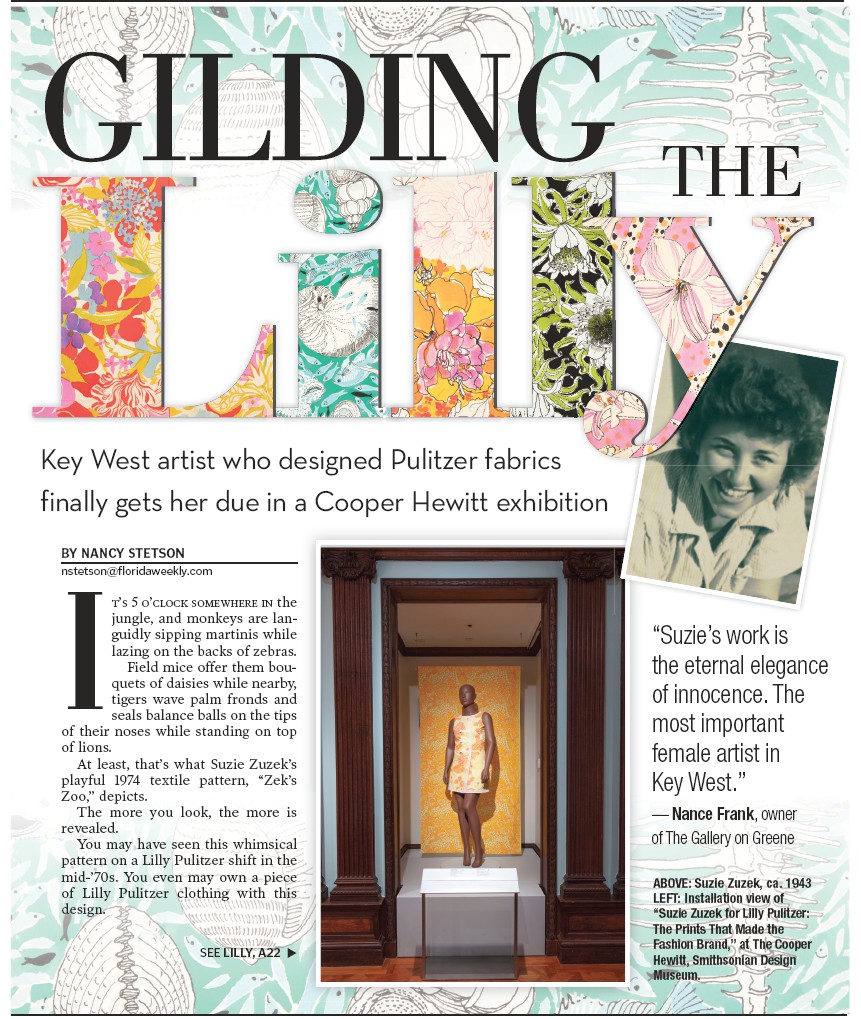 IT’S 5 O’CLOCK SOMEWHERE IN the jungle, and monkeys are languidly sipping martinis while lazing on the backs of zebras.

Field mice offer them bouquets of daisies while nearby, tigers wave palm fronds, and seals balance balls on the tips of their noses while standing on top of lions.

The more you look, the more is revealed.

You may have seen this whimsical pattern on a Lilly Pulitzer shift in the mid-’70s. You even may own a piece of Lilly Pulitzer clothing with this design.

But you can see the original in “Suzie Zuzek for Lilly Pulitzer: The Prints That Made the Fashion Brand,” an exhibit of the late Florida artist’s textile designs, running at The Cooper Hewitt, Smithsonian Design Museum, in New York City through Jan. 2.

There’s also a detail of the painting in the show’s accompanying book, “Suzie Zuzek For Lilly Pulitzer: The Artist Behind An Iconic American Fashion Brand 1962-1985.” 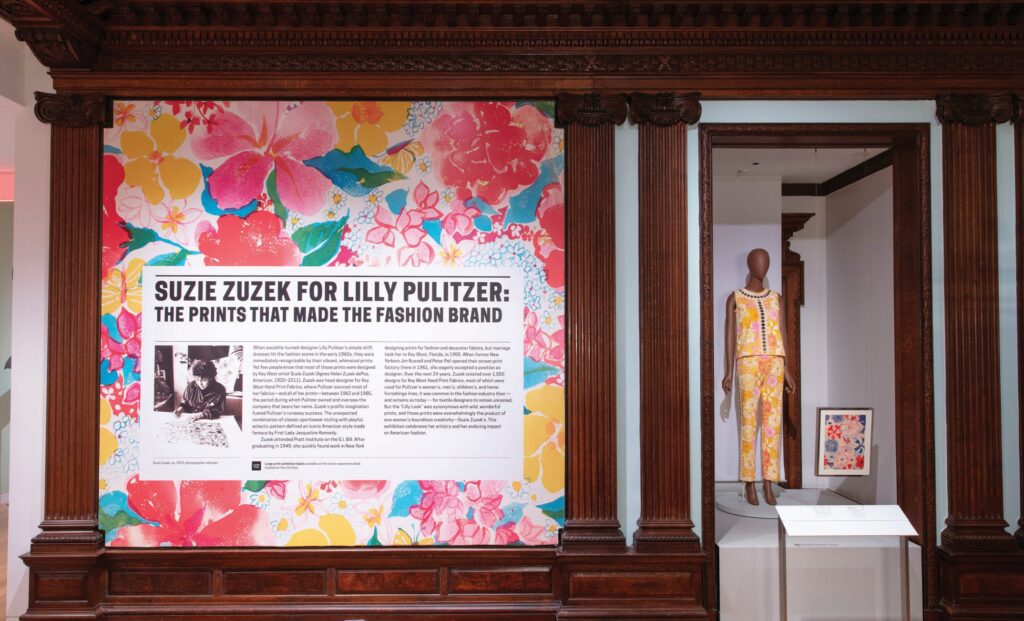 Installation view of “Suzie Zuzek for Lilly Pulitzer: The Prints That Made the Fashion Brand.” PHOTOS BY MATT FLYNN/COURTESY OF COOPER HEWITT, SMITHSONIAN DESIGN MUSEUM. ALL ZUZEK DESIGNS © THE ORIGINAL I.P. LLC

The Key West textile designer, who died in 2011, is finally getting her due with a major exhibit and an accompanying coffee table book with essays by Susan Brown, associate curator of textiles at the museum, and fashion historian/ author/curator/appraiser Caroline Rennolds Milbank.

Zuzek was the artist who designed the textile prints for Lilly Pulitzer’s high-society resort wear, creating the myriad designs and patterns from 1962 to 1985.

The designs are whimsical and playful and include zebras, owls, penguins and tigers, radiating suns and lush tropical flowers, penguins, puffins, and pandas.

With pattern upon pattern and bright colors, they are instantly recognizable from across a room, yet closer inspection reveals intricate detail. A paisley print, for example, is actually the curved bodies of penguins, or a group of walruses. 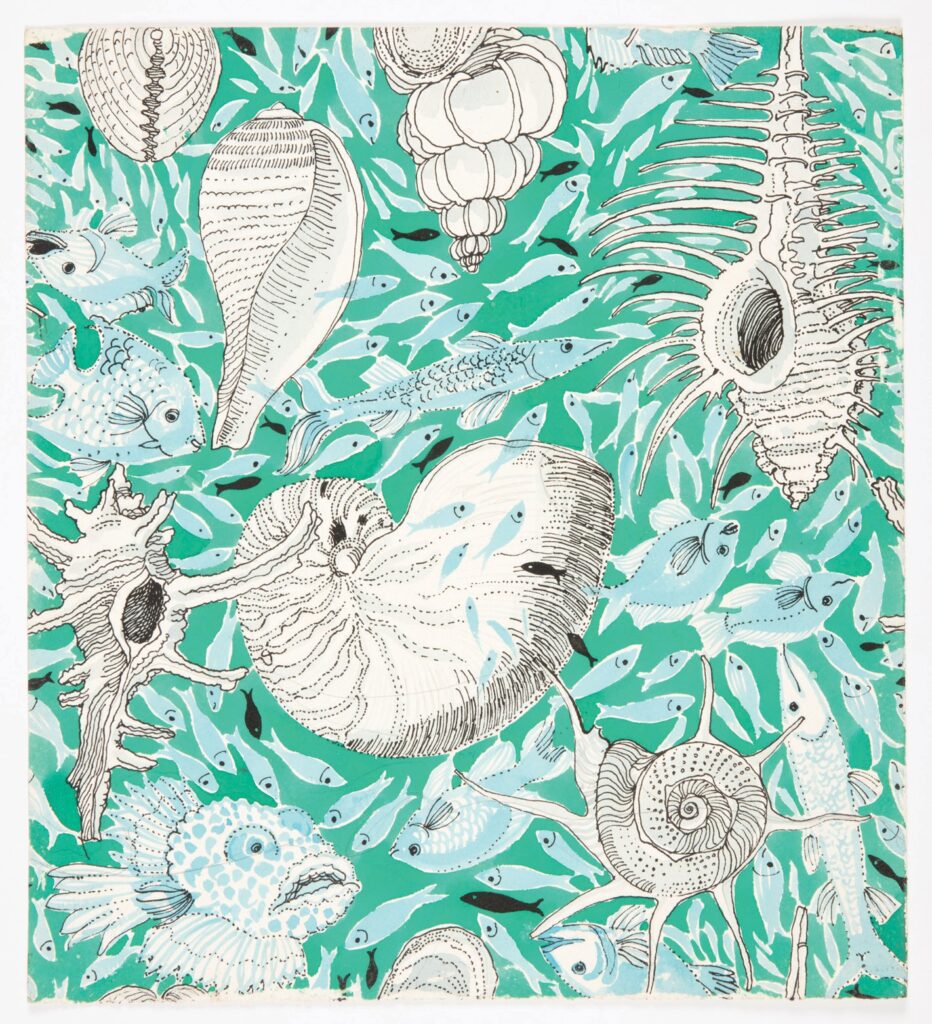 And these unmistakable designs represented “the Lilly Look” as well as the time.

Men and children wore Lilly Pulitzer in addition to women. The designs decorated shifts, sundresses, blouses, skirts, robes, pajamas, swim trunks, suit jackets, and jeans. They were even on pillows and cushions, and spinnakers for sailboats. The socialite who defined the look for preppies was called “The Queen of Prep.”

A glimpse at genius

But it’s enough to give viewers a glimpse of her artistic genius.

“It was charming and beautiful,” she says. “Ethereal. There is great joy in looking at her work. 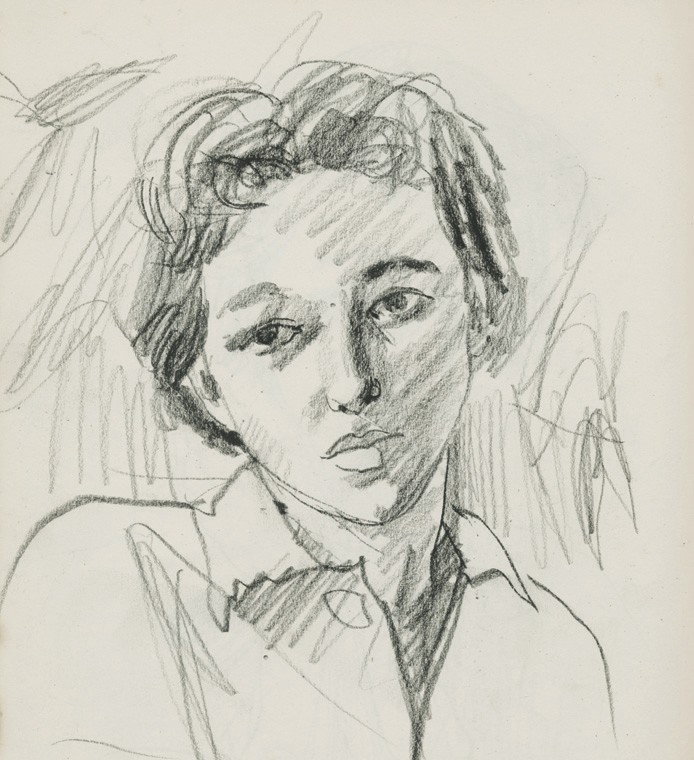 “Suzie’s work is the eternal elegance of innocence,” she adds, declaring her “The most important female artist in Key West.”

Five of Zuzek’s designs are in the permanent collection of the Metropolitan Museum of Art and 10 are in Cooper Hewitt’s.

Ms. Frank, who sells other works by Zuzek in her gallery, was 10 years old when she first saw the artist. Born and raised in Key West, she was at Bottle Beach with her mother, an art collector, who pointed out Zuzek.

“We were digging up bottles, and Suzie was digging up shards to put in her sculpture,” she recalls. “My mother took me to her studio to show me what she was doing with these broken shards. It was the first time I realized what an artist was. It was incredible.”

The two developed a friendship and when Ms. Frank was an adult, she opened an art gallery right behind Zuzek’s home.

“I saw her every day for 20 years,” she says. “I made it my point to go over there. It was like walking into the looking glass. There were thousands of glass shards and bottles full of shells, works of art hanging everywhere, in every corner, on easels. It was amazing, it really was. It was going down the rabbit hole.” 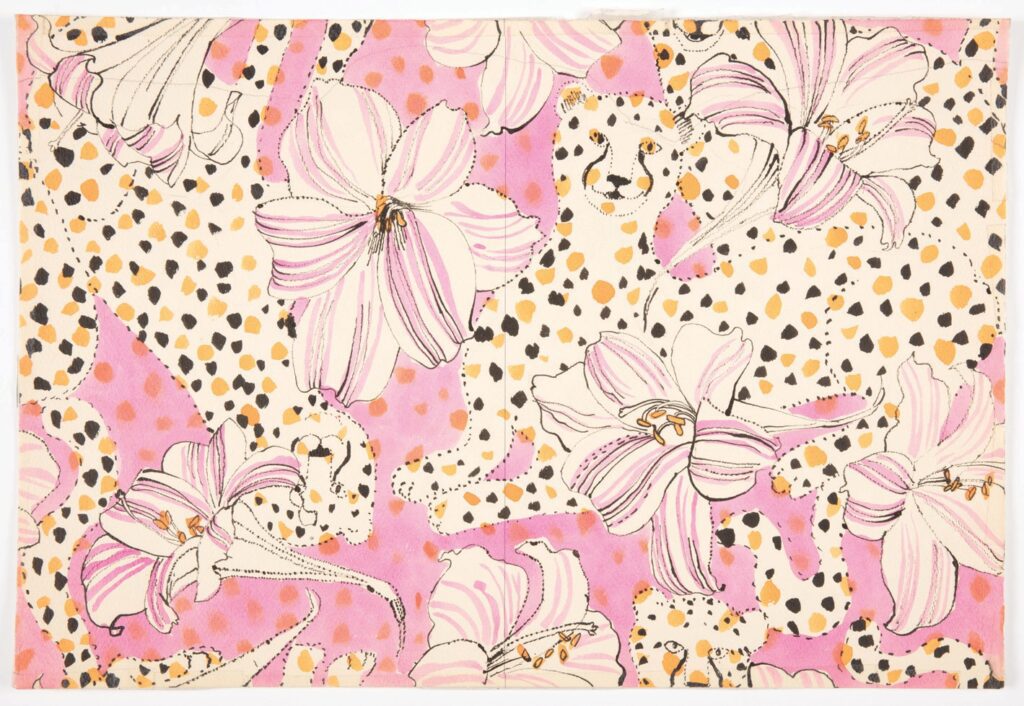 Zuzek is an important artist, Ms. Frank says, and she’s glad she’s finally getting the recognition she didn’t receive during her lifetime.

She’s not sure what Zuzek would have thought about the current attention, though.

“She was excruciatingly shy,” she says.

That lack of recognition wasn’t just due to Zuzek’s shyness; individual textile designers were not typically recognized by name. And the founder of the company, Lilly Pulitzer, perpetuated the impression that she designed the colorful patterns herself. She even had her name, Lilly, printed on every item, sometimes hidden in the images.

But it was Zuzek who was responsible for designing the fabrics that were the foundation for the socialite’s signature look that Ms. Brown calls “distinctive, collectible and fun. 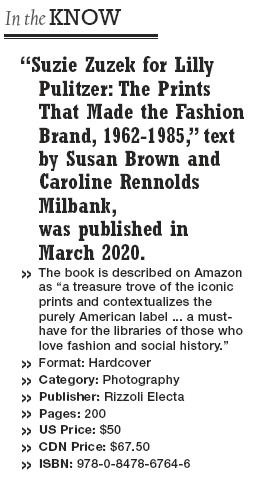 “What makes this story so compelling is that ‘the Lily Look,’ was defined, from the very beginning, by the prints. And those prints were designed almost exclusively by one person — Suzie Zuzek,” Ms. Brown said in a recent lecture to the National Arts Club.

“Suzie’s legacy was being held captive by the (Lilly Pulitzer) brand, who never mentioned her,” says Becky Smith, a co-founder of the Suzie Zuzek Project and The Original IP with Meg Shinkle, an organization whose mission is to save, conserve, catalog and champion Zuzek’s work from 1962 to 1985.

“People identified Lilly with the prints, and Lilly went along with it,” says Ms. Smith. “That line was very unclear back then in the 1960s-1980s. As Susan states, this is part of the issue with textile designers; there’s a textile designer, and the person who gets all the credit is the fashion designer. But what’s different in this case is that one woman, Suzie Zuzek, created this look with her art and her creative soul over the course of a quarter-century, 1962- 1985. And that separates it, really, from most other fashion designers.”

Pulitzer, who opened her first store in Palm Beach, did not dissuade people from thinking she designed her own fabric. It wasn’t until the end of her life, in 2012, that she admitted to Ms. Smith and to Zuzek’s daughter, the artist Martha dePoo, that “The fabulous success of the ‘Lilly Look’ would not have been possible without Suzie’s whimsical and magical creations. She constantly amused me, not only by the genius of her art but also by the sheer numbers of designs she created. I couldn’t wait to see what happened next.”

History and a future

Zuzek, who lived in Key West with her three daughters, worked at the Key West Hand Print Fabrics, a downtown screen-printing studio and retail shop. Before moving to Florida, she had studied textile design and commercial illustration at Pratt Institute in Brooklyn on the GI Bill. She graduated at the top of her class in 1949 and spent three years designing fabrics for drapery and dresses for the New York textile firm Herman Blanc.

It was in Key West that Pulitzer discovered Zuzek’s work. She ordered 300 yards of prints and then, upon returning home, called and upped the order to 3,000 yards. She immediately became their biggest wholesale customer.

Lilly Pulitzer’s clothing was ubiquitous and well-known, but no one knew Suzie Zuzek’s name.

In 1984, Pulitzer filed for Chapter 11 bankruptcy protection, but retained her trademark name.

According to Ms. Smith, Lilly Pulitzer Rousseau sold the archive of copyrighted prints and the Key West Hand Print Fabrics building in 1985 in her company’s bankruptcy. Pulitzer sold her trademark name only — “Lilly Pulitzer” 13 letters — years later in the mid-1990s to Sugartown Worldwide.

But they didn’t purchase any of Zuzek’s designs that had originated and created “the Lilly Look” for 23 years.

Ms. Smith first met Zuzek and Ms. dePoo in 2007. When Zuzek died in 2011, Ms. Smith created a small retrospective of the artist’s work at the Armory in Key West.

“The story was going to end there, for me,” she says. Then she learned that Zuzek’s artwork hadn’t been sold and was still intact.

“I spearheaded the private group to save it and buy it,” Ms. Smith says. “Why go to all this trouble? Because it might have been lost forever. When you see this art — and it was one woman’s creative genius that put this whole archive together — you have to decide, do you help an artist who really helped create a brand? Her legacy was being held captive by the brand, who never mentioned her. Do you help her, or turn a blind eye?

“I felt it was an important American archive in fashion. Millions of people recognize this art, but few attribute it to Suzie. And copyrights of two-dimensional works of art are protectable. So we did all the legal due diligence, and saved it, closing in 2016. The archive had never before been cataloged. We spent the next several years cataloging it and conserving it to museum standards, ensuring that it will be around for future use.”

The work — including more than 2,500 original design drawings — is now housed in a temperature-controlled art storage facility in St. Louis. Ms. Smith will not say how much the group of St. Louis investors paid to purchase the work.

“It’s nothing short of amazing,” she says. “I think there are 100 or so prints in the book. That’s just a fraction of what she created. We are so happy we were able to save not only the entire archive of copyrights and art — prints and drawings — but also Suzie’s legacy.

“The true story had never been told from beginning to end; it took a while to be able to understand how best to tell this fascinating story. We decided that we would be able to take our time and wanted to save (Suzie’s work and legacy) so that it’s around for the next 60 years.”

The group, in the future, will look into monetizing Zuzek’s work.

“There are many Zuzek designs that have not been used,” she says.

“It’s a process,” she says. “There are steps. We feel like we need to be able to do what’s best for the archives and for Suzie’s legacy for every point on the journey. Realistically, we were very happy to save (her work.) And now that the Rizzoli book is out, the story is being told for the first time.”

And the story is an incredibly fascinating one, she says. But the reality is different than what people had previously been led to believe.

“You’re given a story, and it’s like a fairy tale,” she says. “But wait — we’re introducing a new character. Now the story’s different, it’s a little unsettling. They think they know the story, as it’s been fed to them by Sugartown. But you need to step outside of the proverbial box and take a look at the designs. That is what has been saved. The paintings and designs and Suzie’s legacy. It comes full circle.”

And the heart of the matter?

“We want everybody to love Suzie Zuzek.” ¦

2 responses to “GILDING THE LILLY”