Getting around Key West 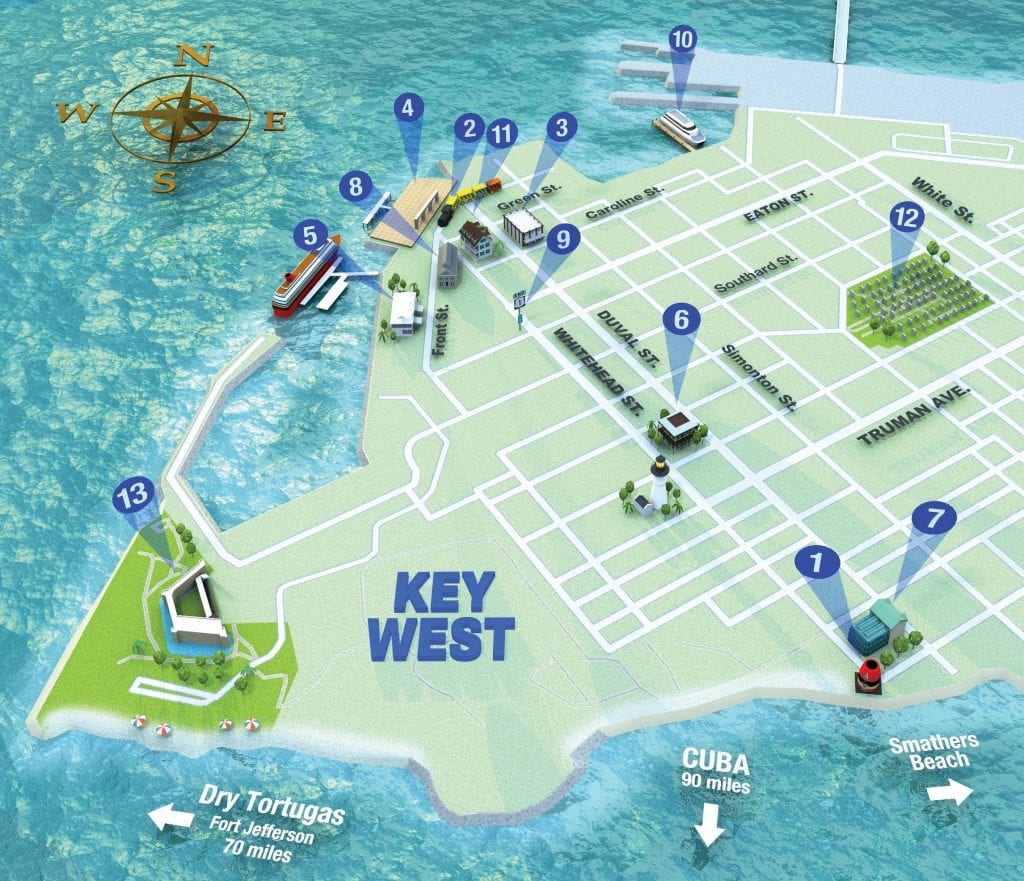 1. Southernmost Point The corner of South and Whitehead streets www.southernmostpointwebcam.com The city of Key West erected this concrete buoy in 1983 to denote the southernmost point in the continential United States.

7. The Key West Butterfly & Nature Conservatory 1316 Duval St. 305-296-2988 or 800-839-4647 www.keywestbutterfly.com More than 50 butterfly species from around the world and 20 exotic bird species coexist in this climate-controlled, glass-enclosed habitat that includes waterfalls, flowering plants and trees.

200 Greene St. 305-294-2633 www.melfisher.org Exhibits include treasures from the Spanish galleons of 1622 discovered by Mel Fisher and his crew.

9. Mile Marker 0 Sign 490 Whitehead St. (corner of Fleming Street) U.S. 1 begins here in Key West and continues 2,369 miles north up the East Coast before ending in Fort Kent, Me. Stop here to commemorate your visit to Key West with a photo next to the iconic Mile Marker 0 sign.

12. Key West City Cemetery Bordered by Angela, Frances and Olivia streets and Windsor Lane 305-292-6718 www.historicfloridakeys.org Stop by the sexton’s office near the entrance at Passover and Windsor lanes and pick up a map that includes a free walking tour.

13. Fort Zachary Taylor State Park and Beach At the ocean end of Southard Street and bordering the Naval Reservation. 305-295-0037 www.Fortzacharytaylor.com “Fort Zach” is known to locals and tourists alike as one of Key West’s best beaches. In addition to the expansive beach, the 54-acre park has nature trails, bike paths, picnic tables and grills and Historic Fort Zachary Taylor. Enjoy the beautiful view of the Atlantic Ocean and the Key West Shipping Channel. ¦