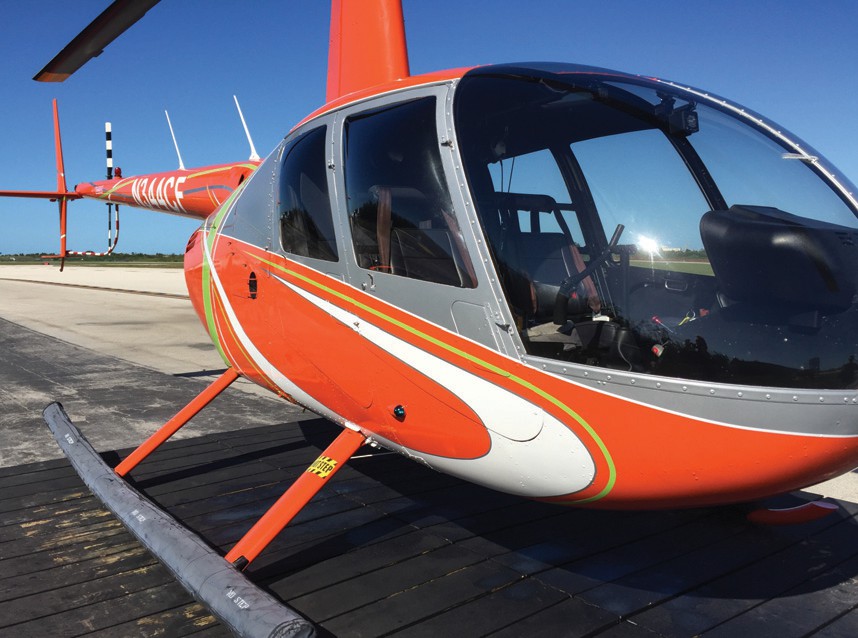 It’s an early morning and the sun ripens the day. Late spring rises, the remnants of an irate winter long dissipated. Plants and trees playfully twist and turn, a slight breeze moving through the neighborhood. A towering maple reaches for the white-flecked blue sky, its branches swaying melodically. Atop, double samara twitches, peers downwards and shuffles its propellers. Light shimmers across the samara, the shadows beckoning it to jump. The branches creak as a frightened gust of wind hustles through them, forcing the samara from its season-long mooring.

“It’s whirligig time!” our mouths shout in unison as the maple seed helicopters its way to the earth. We scramble away, laughter singing our delight, the helicopters twirling en masse; ah, the innocence of spring gently floating among the crisp air.

I have always been intrigued by flight. It’s probably on most kids’ memories as they rustle through their free time — climbing trees, leeringly standing guard over your house to watch the birds fly, Dad skittling along the beach urging the kite to soar, his legs churning the sand, tossing the kite higher or gently swishing paper planes across the lounge, coercing your projectile to take flight longer than your brother’s attempt. We also wistfully imagine ourselves jumping into the air and letting gravity release its power over us. 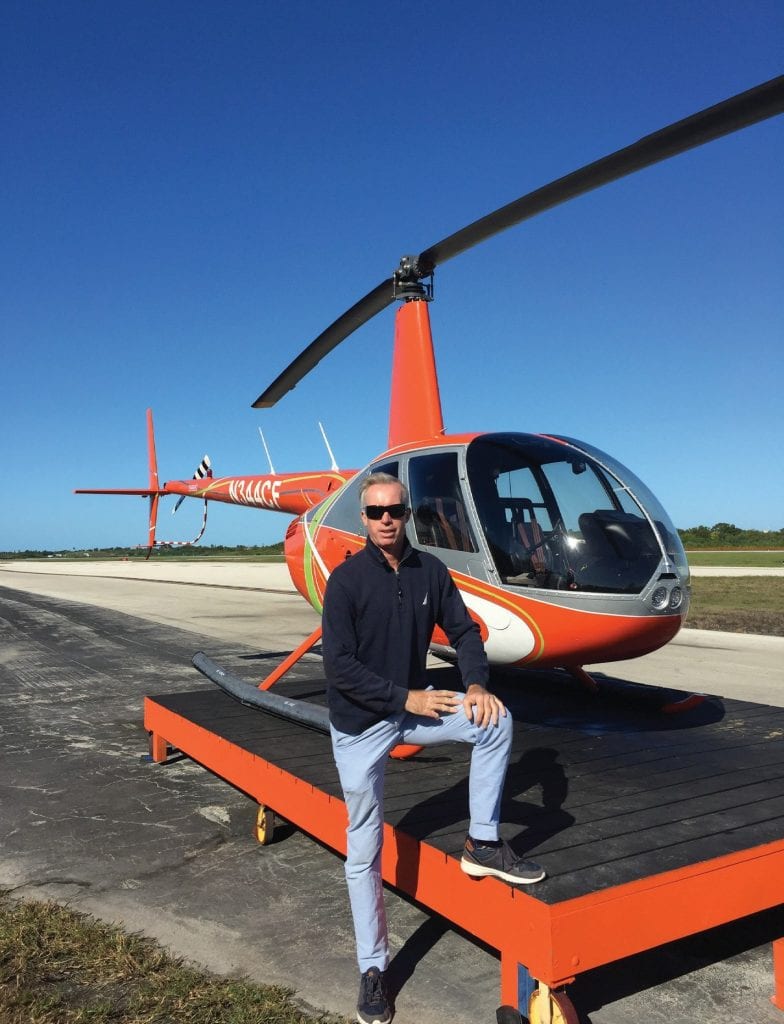 Your intrepid reporter next to Air Adventures’ whirligig. COURTESY PHOTO

But now we have conquered its heavy burden and brought flight to our forefather’s dreams. Today, my dream of “whirligiggin’” landed me in the seat of the Air Adventures Helicopter Tour company and a flight Leonardo da Vinci would have cut his ear off for.

Wayne, our pilot for the 20-minute flight, greeted me along with the two other passengers from Austria. Born close to the shores of Lake Michigan in Chicago, Wayne calms you with his cordial smile and unquestionable warmth of personality. Walking us to the Robinson R44 helicopter, he explains how he crossed the roads of youthful indecision to arrive at his vocation. “I was actually going to school for business and marketing and was sitting in economics and had one of those light bulb moments that really I wasn’t cut out for it,” he reveals. “And I knew then I should have been flying a long time ago.”

The Robinson R44 is a 4-seat single-engine helicopter with a semi-rigid two-bladed main rotor, a two-bladed tail rotor and a skid landing gear. From a distance it seems flimsy, almost toy-like. But approaching it, one is taken aback by its classic design elegance. It’s an adult toy, not one for the fainthearted, liable to squeeze your financial pocket of its contents. An investment of over $360,000 will fill the toy box with something enticingly extravagant, sleekly bold and jovially entertaining. And I was about to don the jacket of being co-pilot, like Dominic was to Stringfellow Hawke. (Now I’m testing your age…)

I queried Wayne further about his unabashed love for helicopters. “I used to watch an old 1980s TV show, Magnum P.I, as a kid and kind of knew all along that that’s what I wanted to pursue.” Somewhere in the world right now, Tom is twirling his wise colored mustache, his tight corduroy pants twisting his mouth into that splashy Selleck smile.

Safety is of top priority and Wayne guides us through the dos and don’ts before we hop in. Pointing to the rotor blades, his voice throws caution to their menace and warns us to keep our distance. An obvious one I thought, but common sense nowadays runs scantily clad, shoeless and without traction in a technology-driven world.

After the dress down in safety, I was led to the co-pilot’s seat. Clamping down on the seat belt, the cockpit space seemed claustrophobic but the bubble-style bay windows in front stretched the eye, comforting my edginess. Wayne initiated contact with the spark plug, the engine fueled into life, the blades jolting into action. Like awakening to our abrasive alarm clocks, the helicopter needs a few moments to actualize its surroundings before it’s thrilled to jump out of its bed. It must have been a long slumber for the chopper, as our anticipation of flight was sullied by a sluggish engine.

With the blades frenetically stirring the necessary winds to raise the helicopter from its comfort on the ground, the force lifts us vertically. To anyone who hasn’t experienced this motion, it’s similar to absolutely nothing. Well, perhaps a Six Flags vertical bungee ride, sans the morsels from throwing up.

The engine drums a soothing percussion as Wayne maneuvers the helicopter east. My curiosity offers Wayne a moment to respond to my questions about the helicopter company. “It was started by Peter Closi,” he states. “He was a camera operator in the helicopters for the news up in Orlando. From that experience, he decided to open up his own business and brought it down to Key West.”

“And how many years ago?” I query. “Five years ago,” he responds. “This is his first big aviation company and now he’s starting his first seaplane company in Clearwater.”

We bank south toward Fort Zachary Taylor, the churned water from the ubiquitous jet ski tours painting the ocean with streaks of white. On this brisk day I notice what can only be Northern folk crowding the shores, their stoic bravery outshining their early winter tans. As we cruise past the southern part of the island, Wayne fills my mental inbox with some details of the company’s tours.

“We have an hour-long tour which takes you up to the Seven Mile Bridge,” he says. “We typically hug the south side of the islands there and when we turn back, we follow the north end. It takes about 25 minutes to get there.”

At a height of around 300-500 feet, we are entertained by the finest views. Sunset Key and Wisteria island, the plethora of sailing vessels churning their engines and bank accounts, floating cumbersome hotels anchored in wait for their gaggle of passengers, Fleming Key and beyond. Cloudless, the sky’s clarity reaches out and mesmerizes us. The sun’s tentacles dance a brilliant light show across the waters, sparkling up the ocean’s smile.

Heading toward the flats of the Gulf of Mexico, we are told to be on the lookout for sharks and turtles. Dusky brown shallows are sliced through by the deeper channels and this is where one can view the kings of the aquatic food chain.

“The lemon sharks and nurse sharks are prominent in this area but today with the chilled air and water, they might have moved on to warmer waters,” Wayne states. “I have seen about a 9-foot lemon shark before.”

Pelicans, those mischievous-looking clowns of the Keys, glide under us, along with other parts of nature’s circus. Cormorants and egrets flap into gear, their wings launching them as our shadow follows in pursuit. A slew of mangroves dot the waters with blankets of green, adding depth to our canvas. Silence affirms our feelings; it is in the quiet brilliance of Mother Nature that we are spared words.

Wayne stirs my gaze. “If we see some wildlife and we want to have a better look, I’ll drop us to a couple hundred feet to take a peek.”

We scan the shallows for darker, slithering shadows, as signs of sea life. With our speed of about 100 mph, the trip covers a vast area of the flats and channels. Today we were assigned just a few brief visuals of rays and a juvenile nurse shark.

Wayne veers the 1,450-pound empty weight whirligig east, affording views of the Special Forces Underwater Warfare Operations school at the tail-end of Fleming Key. A nondescript white building oversees the land, glancing upwards as we cruise above it.

With our designated time dwindling, we approach mainland Key West, the runway appearing to the north. Wayne radios in our presence and we gently levitate lower. With the helipad nearing, he nudges the bladed beast ever so effortlessly to his right. As we hover above the machine’s nest, I reflect on my thoughts.

We live in a most spectacular part of the Universe. Utopia resides within the kaleidoscope of deep, vibrant colors emanating from the Florida Keys. Perched high above our island, in a helicopter expertly guided by Wayne, one is placed onto a podium, a seat from which to catch your awe. Here we are perfectly insignificant as Nature conducts her magnificent orchestra. Music to our ears and sublime notes to our hearts.

Rise up, be lofty and float like a whirligig atop the island. It is sure to bring you close to Nirvana. ¦