Fishing in the Keys

Though the residents of the Florida Keys have a reputation as being hardy stock, weathering everything from natural disasters like Hurricane Irma to the worst hangovers known to man — Fireball is not your friend — there are two little words that typically strike crippling, ocean-avoidant fear into the hearts of any local worth his or her Florida Keys sea salt: Lobster Season. The dreaded time of year is upon us when the hordes of lobster hunters descend on our precious island, invade our pristine waters and jet home with their coolers full of Key West’s crustacean aquatic bounty.

Although we fully support the hunt (and we won’t lie — we’ve certainly tickled our fair share of lobsters out of their hidey holes), if you want to avoid the crustacean-crazy crowds there are millions of other creatures that call Key West’s oceanic ecosphere home — we’re talking about the innumerable sea-borne delights best enjoyed sautéed in a little white wine and butter and served simply with a lemon wedge and a cold glass of rosé. And in the dead of summer here in Key West, sometimes the only way to beat the heat is to pick up a rod and start fishing. Thankfully, there are infinite fishing options to please every pescatarian sportsman looking to catch supper. 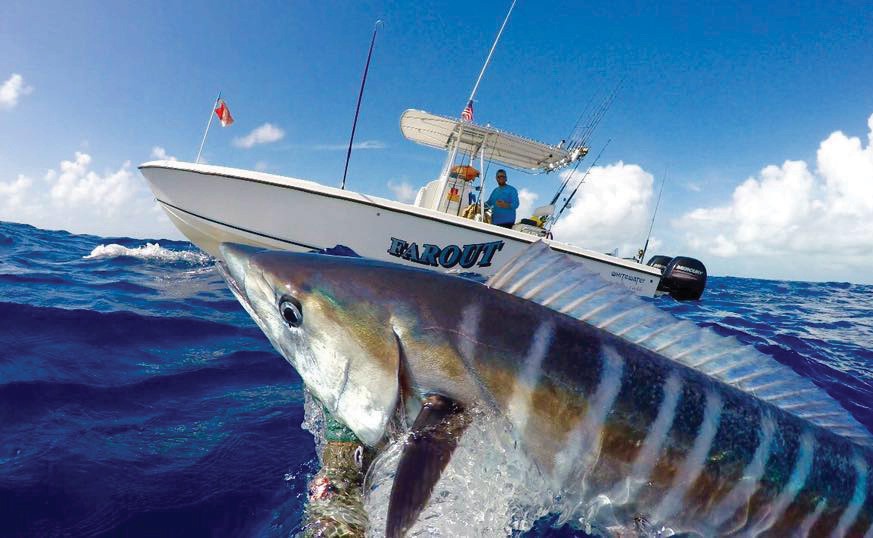 Capt. Chris Mendola of Far Out Charters on his flagship watercraft (with a fishy friend). COURTESY PHOTOS

While plenty of places across the globe claim to have “The Best Fishing on the Planet,” Keys residents back up their claim with a literal pu-pu platter of fish species thanks to Florida’s proximity to the third largest barrier reef on the planet. Each year, thousands of tourists from the farthest flung corners of the world travel here to try their luck at fishing our reefs, flats, wrecks and deep water. The dreaded three-day lobster miniseason aside, summer in the Keys means there’s never a bad spot to set down your anchor (or, if you’re partial to skin diving and spearfishing, to jump into the water) and bring up something tasty for dinner.

Whether you’re set on deep dropping for queen snapper or choose to hit the wrecks for some light tackle grouper hunting, it’s the perfect time for amateurs and angling pros alike to try their luck in the famously fertile waters surrounding our island. We reached out to some of the Keys’ best charter companies to find out what you should be trying to catch this summer and the best way to do it.

Even Ozzy Osbourne knows Compass Rose Charters is a great choice for fishing in Key West.

In the dozen years that Capt. Chris Mendola, owner of Far Out Charters, has been taking his clients out fishing, he’s developed a niche for himself: Mendola is the person you call when you want to catch a swordfish. The notoriously difficult-to-land billfish is known for its magnificent appearance, its flaky white flesh and for being one of the best fights in the ocean — that is, if you can get a-hold of one in the first place.

There’s a common misconception that the best way to catch one is by going out at night, says Mendola, that can deter some anglers who aren’t keen on skipping an evening at Sloppy Joe’s in favor of waiting in the dark while being tossed around by the choppy waters of the gulf. But far less important is the time of day one puts a line into the water than the depth a line is dropped to — up to 2,000 feet, to be specific. It’s a tricky, technical kind of fishing, requiring heavy lead weights, particular types of belly bait, special permits, tiny strobe lights and a precise method of drift catching that utilizes the natural current to avoid tangled lines. You’re not going to stumble upon this kind of fishing when you’re casting a few lines off the White Street Pier. 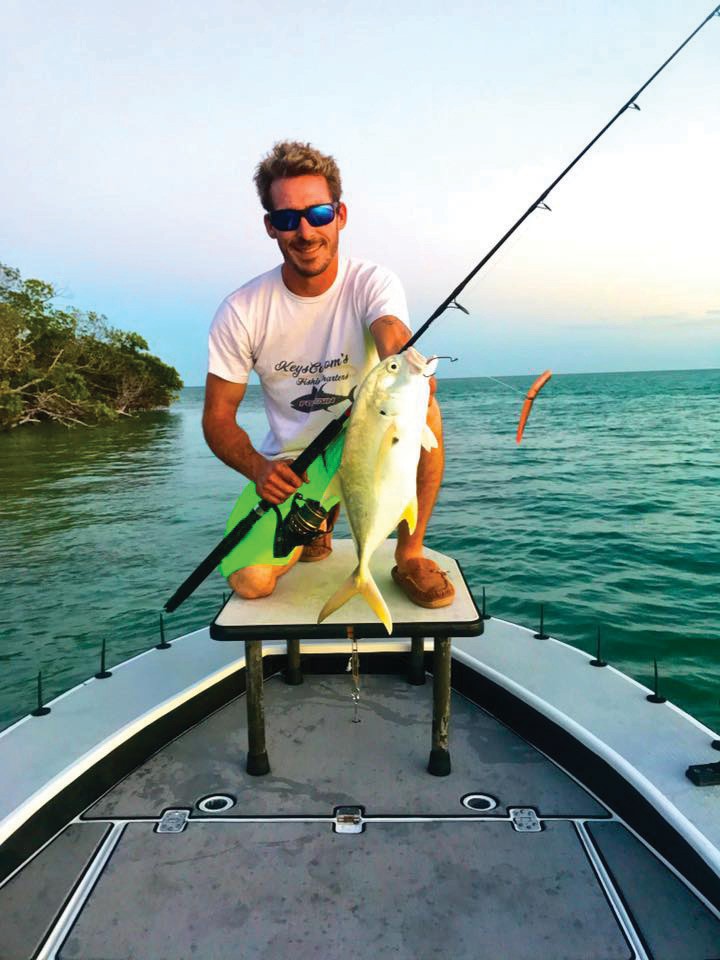 Mendola keeps his boat outfitted with top-of-the-line electric assist rigs, giving his customers the option to battle their prey manually towards the end of what can sometimes be a very, very long fight. But the work is, according to any sport fisherman worth his weight in tuna, well worth the fight. The bite of a swordfish is subtle, not drastic; it takes a trained eye to spot it, which is where going out with a qualified guide comes in handy. Since it can take a few hours, it’s a great fit for anglers who have been out on the water enough that the shock of pulling something — anything! — off the reef has worn off, and who are looking for something more challenging. 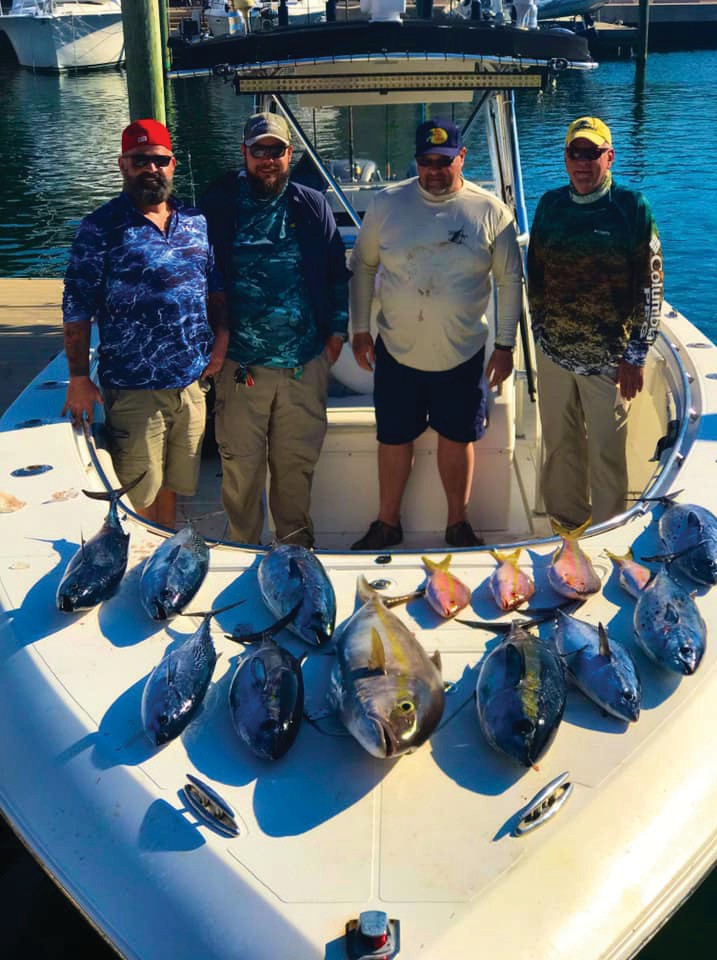 It’s the same thirst for adventure Mendola possesses that also drew Capt. Justin Jennings Annarino to start his own charter business, Keys Custom Fishing Charters, in 2016. Although Annarino has his hands full with his Stock Island-based automotive business, Keys Custom Automotive, he now spends many of his days focusing on the fun, casual side of living in the Florida Keys, mixing activities like snorkeling, eco tours, sand-bar hopping and dolphin sighting into his fishing charters.

For Keys Custom Fishing Charters, the summertime is a great time to explore the vastly different underwater worlds that surround Key West. It’s the diversity of both species of fish and types of ecosystems that sets Keys fishing apart from the rest of the world, with access to shallow patch reefs, inshore channels and deep water Atlantic fishing never more than a few miles away from one another. 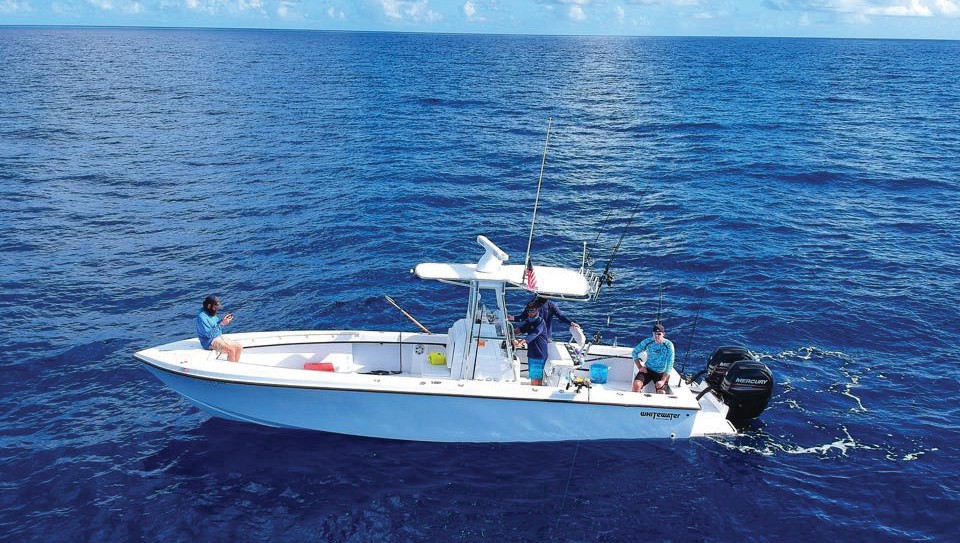 Local charter companies delight in showing off the bounties of the waters surrounding the Florida Keys.

Though Key West is a notoriously expensive and difficult place to run a business, Annarino’s team is small and tight-knit, with a decidedly boutique approach compared to the cattle call-type charters that many tourists find themselves stuck on during their vacation. Keys Custom Fishing Charters doesn’t have a booth on Duval manned by tawny teenagers hawking jet-ski trips; its business is based on word-of-mouth referrals and repeat clients looking for a deeply personalized fishing experience.

Much like Capt. Annarino, Capt. Mike Weinhofer takes an exceptionally individualized approach to his charters on his shiny vessel, the Compass Rose. A lifelong fisherman with angling in his blood, Weinhofer moved to Key West in 1990 and has become one of the foremost experts in local light tackle fishing. Whether you’re an experienced angler or a novice looking to impress your Instagram followers, he can customize a trip out to the myriad reefs and wrecks both offshore and inshore. 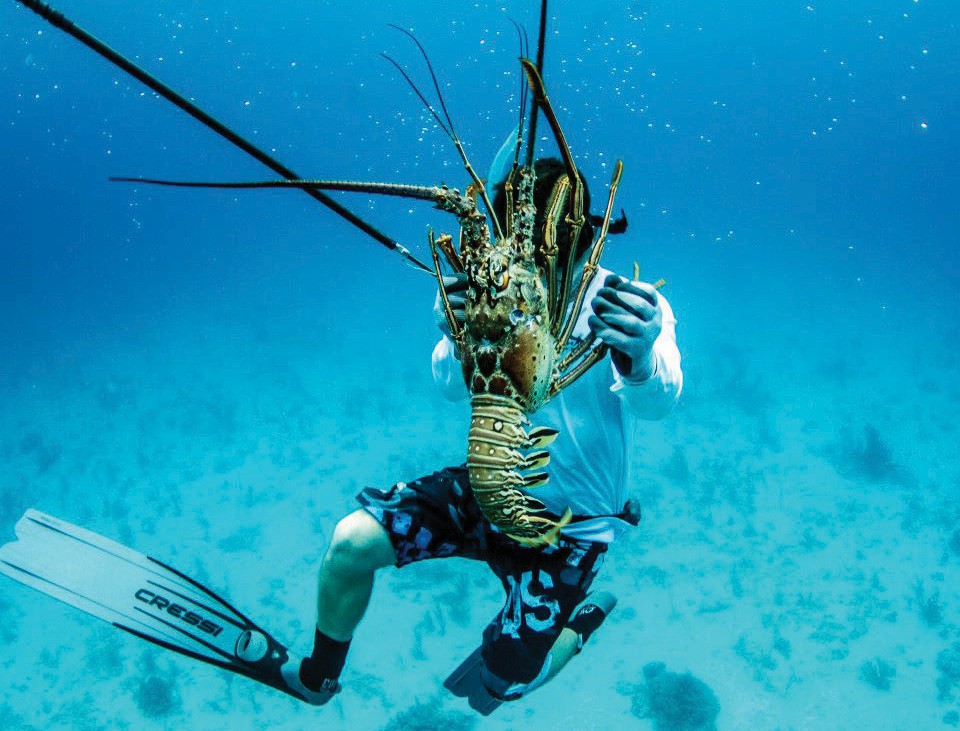 Catching lobster in the Florida Keys is easy when you’re with a professional guide. COURTESY PHOTO

And although Compass Rose Charters is named after the flagship craft, Wein- hofer has five more boats for whatever type of fishing suits your fancy — from the serenity of the flats to high-intensity tarpon and everything in between. Looking for a trip that will make your heart race? On the Compass Rose’s Sunset Shark trips, you’ll have the opportunity to hook lemons, bulls, blacktips, hammerheads and more. Just make sure you keep your hands to yourself.

If it’s a long day of sport fishing you’re after, look no further than Wild Bill Sport Fishing. Capt. Art Duplessis has 23 years of experience fishing the waters of both the Atlantic and the Gulf of Mexico for just about every species of fish out there, including sailfish, marlin, king mackerel, grouper, tarpon, barracuda and wahoo — in fact, one of Duplessis’s mottos is, “If it swims in more than four feet of water, we’ll find it!”

A self-described fishing fanatic, Duplessis is relentless in his mission to ensure that his guests are comfortable, have fun and — most importantly — catch fish. Every excursion on the Wild Bill is completely customized to the group’s fishing desires, so rest assured that your trip with Art will deliver on all of your aquatic expectations.

For those new to the sport, summertime is the ideal time to engage in reef and wreck fishing, as the rewards — in both excitement and the diversity of catches — can be impressive. Throw in a guided tour of the back-country wilderness and you’ve got a recipe for a uniquely memorable day. And while the well-stocked flats around Key West offer practically guaranteed success year-round, it’s during the summer when flats fishing reaches its explosive peak, with great opportunities for anglers of all levels to fight bonefish, permit and tarpon.

For those more experienced sport anglers, summer in the Keys is the best time to try for those famously fun-to-fight (and delicious) pelagic species, such as mahi-mahi and wahoo. And if it’s a drawn-out battle you’re after (and you’ve already snagged a swordfish or two), now’s the time to get out onto the water and try your luck at hooking a blue marlin, whose tremendous strength offers an awesome fight for anyone lucky enough to snare one.

No matter what types of activities you choose to engage in, summertime in the Keys typically means you’re in for days of blisteringly hot sun, punctuated with the occasional afternoon thunderstorms that often knock out the power for a little while. It doesn’t take much for the island to flood, but those particularly dedicated drinkers can rest assured that kayaking to the Green Parrot will put you right alongside a group of seasoned locals, for whom the phrase “rain or shine’ takes on a very literal meaning.

But, temperamental weather aside, there’s really no better time to visit the Florida Keys with fewer crowds and more active ocean life, it’s the perfect time to spend a few days cooling your face with an ocean breeze or two. Load up on the SPF, pack twice as much water as you need (no, beer does not count as water no matter what your frat brothers say) and get some lines in the water. Dinner tastes infinitely better when it’s freshly caught and hard-fought, anyway. ¦