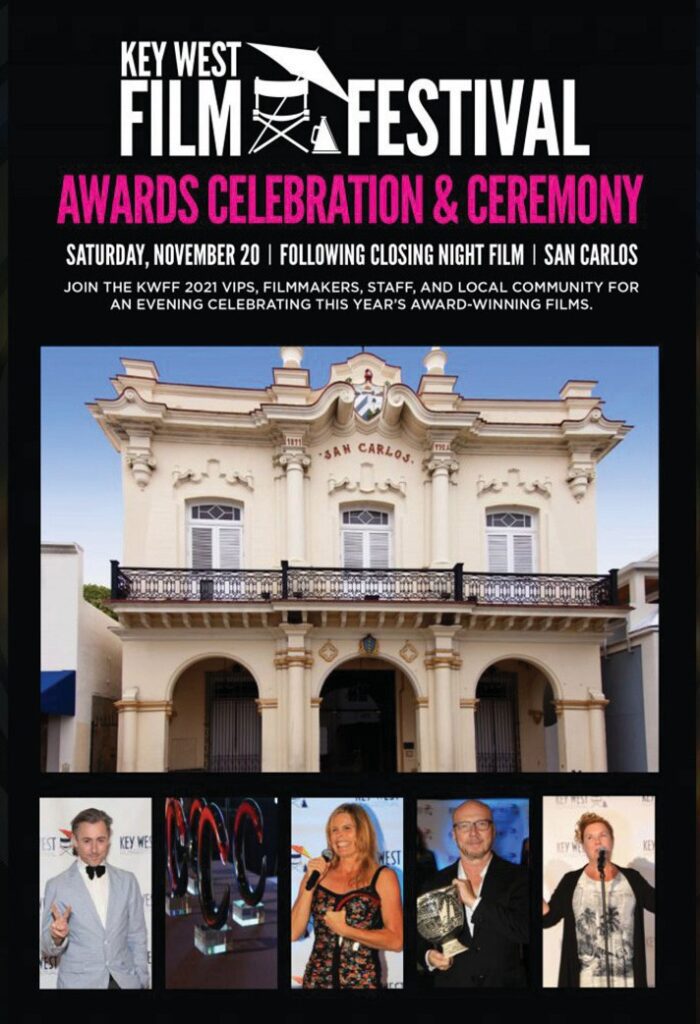 Key West Film Festival Director Michael Tuckman takes pride in pulling off an in-person meeting of the minds for cinephiles on the island in 2020. And he’s keeping some of the modifications made along the way.

“Being all outdoors in 2020 — the only festival post-pandemic to happen entirely in person last year — opened our eyes to the amazing world of outdoor screenings.”

Naturally, there will be more oceanside viewings and affairs in the mix. The festival returns this month (continuing through Nov. 21) for its 10th edition with films, documentaries, and shorts featuring Benedict Cumberbatch, Penélope Cruz, and even one unlikely team’s path to compete at The World Wine Blind Tasting Championships. There is a broad and inclusive body of work to be viewed by all with categories ranging from the Florida specific to productions emphasizing the LGBTQ+ community.

Tuckman spoke to me about bringing audiences back to the screen after a year that shook up our consumption of film and television. 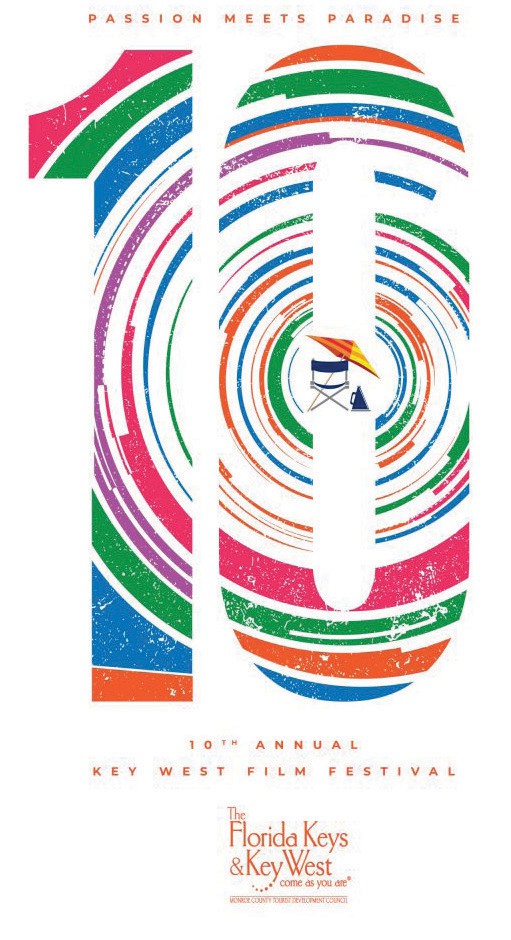 “The film festival’s goal each and every year is to create such a community where friends and strangers alike can be awed, inspired, and amazed.”

Panel discussions, after-hours parties, awards, and the occasional celebrity run-in for film aficionados remain in play. Here is a brief conversation with the festival director himself on all you can expect.

What is the most important objective of the festival having returned after the disruption of the pandemic?

Tuckman: It’s really simple  — bring audiences back together again to create a community – to celebrate shared cultural experiences. We’ve all consumed so many films and series these past 18 months, but we haven’t been able to share that with others. The film festival’s goal each and every year is to create such a community where friends and strangers alike can be awed, inspired, and amazed. Bringing that back this year is more important than ever. 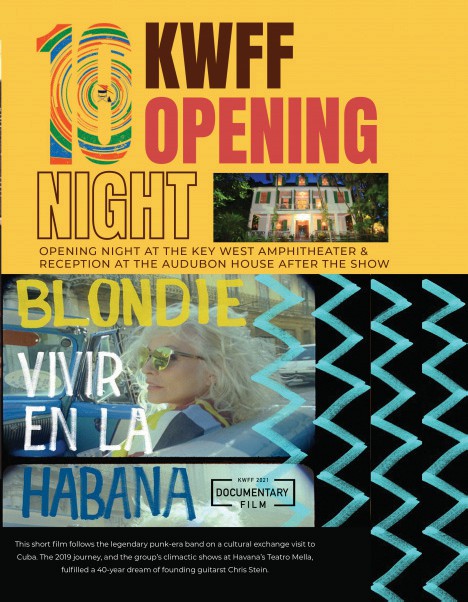 A poster announces the festival’s opening night at the Key West Amphitheater with a reception at the Audubon House. KEY WEST FILM FESTIVAL / COURTESY IMAGES

Are there any big changes taking place since 2019 and 2020’s modified showings?

Tuckman: Like the rest of the world, we’re not pretending that the last 18 months didn’t happen and things are 100% normal now. So, it’s not like 2021 will be just like 2019. But, being all outdoors in 2020 — the only festival post-pandemic to happen entirely in person last year — opened our eyes to the amazing world of outdoor screenings. We’d have never imagined opening night at the Key West Amphitheater, but we’ll be doing that for the second year in a row, again with a music-themed film. And we’ll have other outdoor screenings at The Perry Hotel. ComingC back indoors allows us to once again show the most acclaimed films of the season. But we also want to allow for safety and comfort zones, so we’ll be using larger venues like the Key West Theater and San Carlos Institute to allow for more space between patrons.

What are some of this year’s big features and is there an overarching theme?

Tuckman: I’m really trying hard to think of a previous year in which a majority of the films we are playing are some of the highest-profile awards titles of the year — Jane Campion’s “The Power of the Dog,” starring Benedict Cumberbatch, Mike Mills’ “C’mon C’mon,” starring Joaquin Phoenix, Richard Jenkins, Amy Schumer and Beanie Feldstein in “The Humans,” and Penélope Cruz in Pedro Almodóvar’s “Parallel Mothers,” to name a few. Also, some major titles with less name recognition like “Red Rocket,” from Sean Baker, director of “The Florida Project,” who we will be honoring in person with our Golden Key Award and Florida-born filmmaker Clint Bentley’s “Jockey,” starring Clifton Collins Jr.

I mean, it’s an embarrassment of riches. And that’s not even including our other selections, which bring about the best in documentaries. Kenny G, anyone? LGBTQ films and international cinema. The overarching theme continues to be bringing the best cinema in the world to Key West before it can be seen anywhere else.

What about some of your lesser publicized selections from newer filmmakers?

Tuckman: Oh my, where do we start? Two years ago, we had the pleasure of honoring Tom Skerritt on the 40th anniversary of the release of “Alien.” Lo and behold, we’re showing a film from a first time director called “Alien On Stage,” about a community stage production in Northern England of “Alien.” The town does a musical as a fundraiser each year with the parts being played by bus drivers, toll collectors, and sets made by local craftsmen. It’s right up your alley if you loved Christopher Guest’s “Waiting for Guffman,” except this one is 100% real life! Another film not to be missed from new directors is the inspiring “Blind Ambition,” about Team Zimbabwe’s quest to compete at an international wine tasting competition. They are all refugees from the strife in Zimbabwe and currently living in South Africa, but are able to compete at the world’s most prestigious event. Bonus! We’ll be having a wine tasting after the screening. Not to be missed.

How about the events attached to this year’s screenings?

Tuckman: It’s not KWFF without the events! We’ll have our opening night reception at the Audubon House once again and are very happy to be returning to Key West’s First Rum Distillery for a party Friday night. New this year is a special marina-side event at The Perry Hotel on Thursday night. We’ll be putting together a series of envelope-pushing film shorts and welcoming the filmmakers to town that night. This follows a special 20th-anniversary screening of “Moulin Rouge,” which will be a sing-a-long hosted by Key West’s own Epiphany.

Is there a single spontaneous encounter or get-together at the festival in recent years that stands out?

Tuckman: KWFF has always been about creating community. For five days, we bring film lovers and filmmakers together and create a great community of the two mixing. One that I haven’t seen at other festivals. Two years ago, it was only natural that a late-night karaoke party would break out on closing night. There are few national treasures like Bobby’s Monkey Bar and the local dive bar was packed by 1 a.m. with the likes of “Boys Don’t Cry” director Kimberly Peirce belting out tunes, joined by director Trey Edward Shults crooning “Don’t Stop Believing,” and even one filmmaker using a mic outside the bar as she doesn’t get near smoking. It was so spontaneous, and the regulars at Bobby’s made it even more special, singing along as this tsunami hit them. ¦