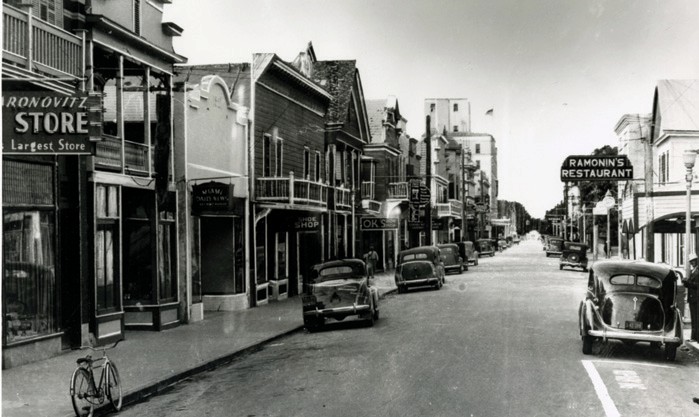 A photograph taken during the late 1930s shows the 600 block of Duval Street, looking north. This image and others form part of the Custom House Museum’s exhibit, “The History of Duval Street: The Longest Street in the World.” KEY WEST ART & HISTORICAL SOCIETY

You may know it as a hub for the seemingly endless party that at times is Key West.

But Duval Street is the most recognized street in the Florida Keys.

It also is the subject of an exhibition.

The Key West Art & Historical Society has opened “The History of Duval Street: The Longest Street in the World,” an exhibition honoring the island’s main thoroughfare staged in the Bryan Gallery at the Custom House Museum.

Curated by Cori Convertito, the exhibition features images, objects and artwork dating from the 19th century to the present day representing several of the people, buildings and events connected to Duval Street.

Duval is whimsically nicknamed “The Longest Street in the World” because it runs from Gulf of Mexico all the way to the Atlantic Ocean.

And it’s home to architectural gems such as St. Paul’s Church, The Strand Theater, the San Carlos Institute and the Southernmost House and also has hosted such bars and restaurants as Sloppy Joe’s, the Bull & Whistle, The Chart Room, Shorty’s and Delmonico’s, among others.

“The pulse of the island, both historically and presently, beats from this particular street. When the military established themselves in Key West, they did so on the northern end, near the deep water port,” Ms. Convertito said in a statement. “From there, Duval grew in length and importance to wreckers, spongers, cigar manufacturers, tourists and residents.”

A few of the remarkable objects that will be on display include a 100-foot section of the “Sea to Sea” Rainbow Flag that was spread 1.25 miles from the Gulf to the Atlantic in 2003 and a silk menu from a luncheon held at the Russell Hotel in honor of Ulysses S. Grant’s visit to the island in 1880. Intaglios illustrating several Duval Street buildings created by Cuban-American artist Mario Sanchez also will be on display.

“So much of our island’s heritage is connected to that one-and-a-quarter mile thoroughfare,” Ms. Convertito said. “By mounting this exhibition, the society hopes to enlighten visitors on the historical importance of Duval Street that extends well beyond its bars and restaurants; we must honor the people, the buildings and events that shaped our story.”

“Duval Street: The Longest Street in the World” launches with an exhibit opening on 5-7 p.m. March 19. Social distancing and masks will be required in order to adhere to local and CDC guidelines. The exhibition runs until August and is sponsored by the Helmerich Trust and the Florida Division of Cultural Affairs.

The Custom House Museum is at 281 Front St.