The founder of the KEY WEST MERMAID FESTIVAL explores the island’s magic. 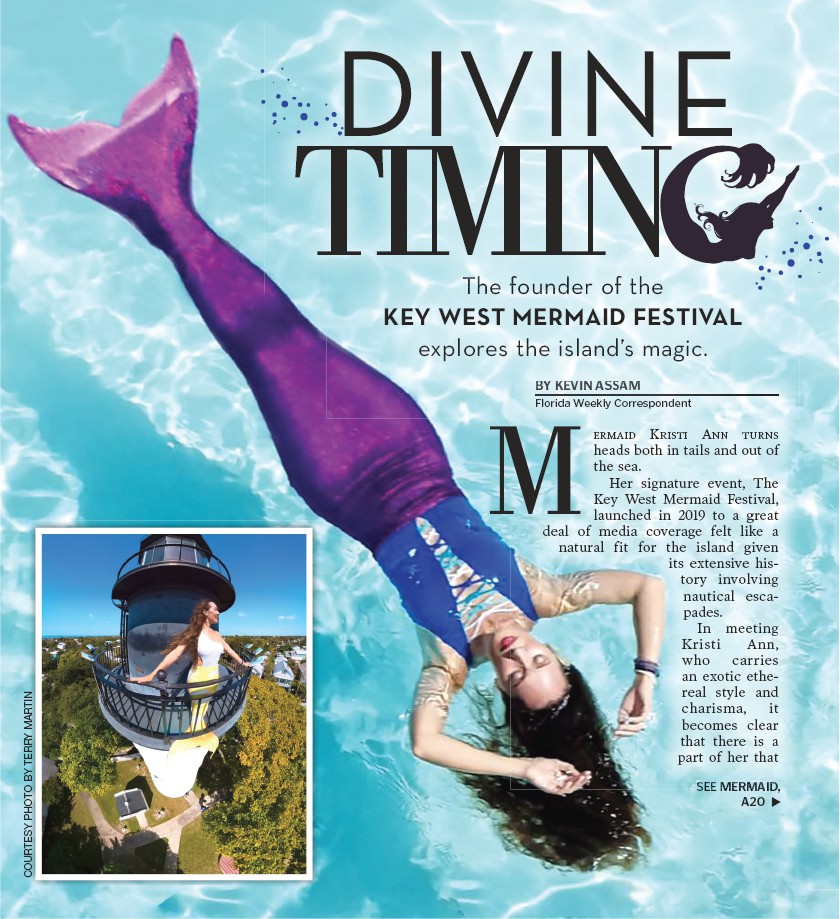 MERMAID KRISTI ANN TURNS heads both in tails and out of the sea.

Her signature event, The Key West Mermaid Festival, launched in 2019 to a great deal of media coverage felt like a natural fit for the island given its extensive history involving nautical escapades.

In meeting Kristi Ann, who carries an exotic ethereal style and charisma, it becomes clear that there is a part of her that really believes in the existence and significance of some variation of mermaids. In learning to swim before she could walk and running an appropriately themed boutique for several years, she certainly commits to the lifestyle of being one of South Florida’s most popular professional mermaids. An admission that usually elicits some surprise or bemusement from those who ask about her occupation.

Ahead of her upcoming festival, Kristi Ann and I talked about the enthusiasm of the media, exploring new roles, and the magic of Key West.

How long have you been obsessed with mermaids and aquatic lore? 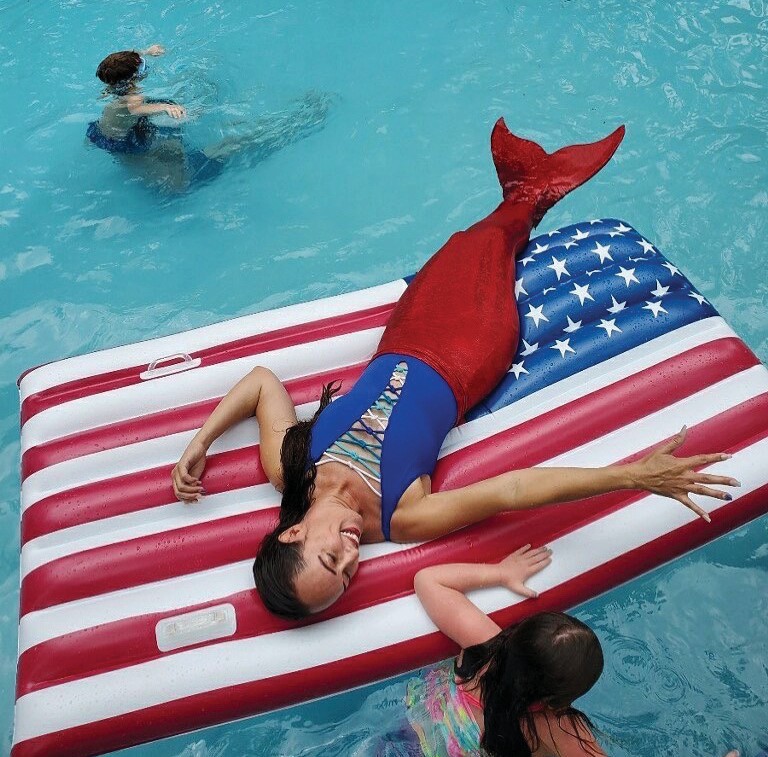 Guests can swim with the mermaids during this year’s Key West Mermaid Festival. COURTESY PHOTO

Kristi Ann: Wow, that’s a great question. I actually get asked that so much, but never get tired of telling my story. I learned to swim before I could walk or talk, but my earliest memories of playing mermaid in the pool, canal, or open ocean was with my sister Tally Ann at the age of 4. But I’m sure it was much earlier, being raised in a family of commercial fishermen and ocean lovers on the island.

What sort of child were you trendwise? Did people quickly follow on to your style or interests?

Kristi Ann: I was always very different in my way of thinking and appearance. Always a little bit extra! Although at times I could be very shy, it was never with speaking my mind when asked, performing, or in the way I dressed. I noticed this about myself at a very young age. Without knowing what it was as a child I would have to say yes. At the age of 3, my mother put me in dance classes, and in my own way, I would want to wear a big red bow in my hair, or fun-colored shoes, and accessories. It wouldn’t be too long before the other little girls would do and wear the same things. 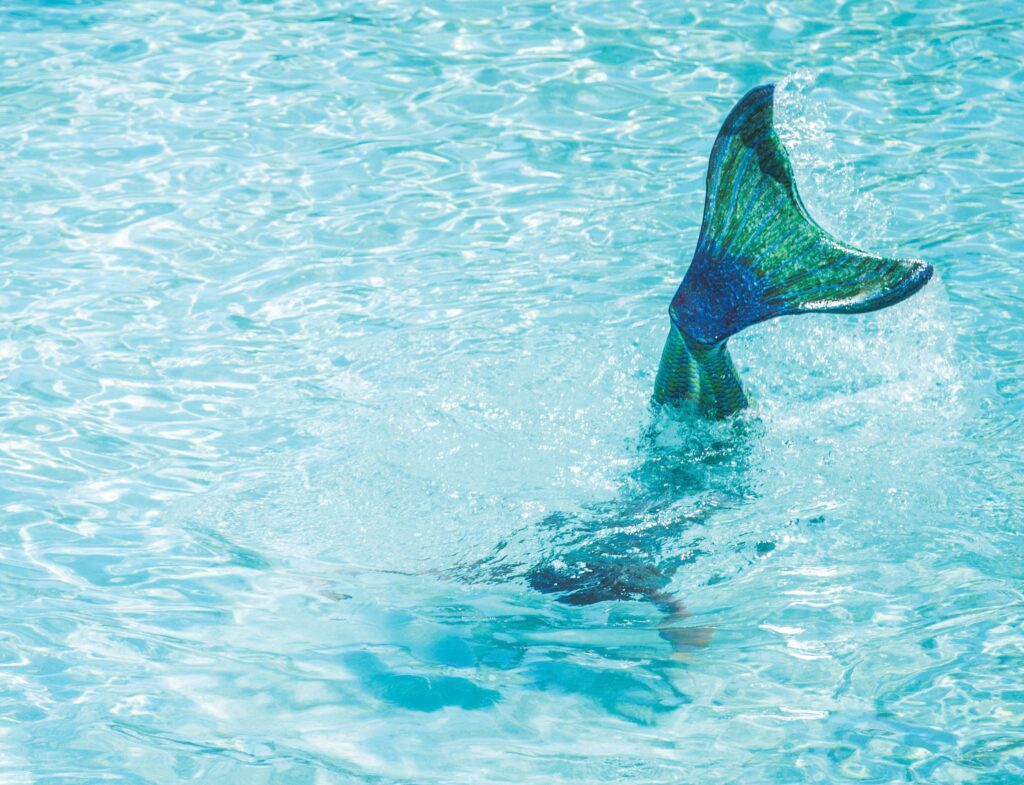 Did you feel a bit of role-reversal in launching a festival that already had communities or “pods” of professional and cultural mermaids in other parts of the country?

Kristi Ann: No, I did not. At the time, I had the very first mermaid boutique on the island, selling lots of treasures. The highlight was the swimmable mermaid tails you could purchase. When my family and I contacted Fin Fun Mermaid for the first time they did not sell wholesale. But with a retail buyer background I convinced them this would be a great idea. And so it was! I also knew very little about the mermaid movement. In 2013, that was happening around the globe, and gaining lots of popularity and attention.

I had met other women who had similar interests [who] approached me at my boutique in 2015 — the year I expanded and moved to a bigger location across the street. My store would attract mermaids at heart. Besides playing mermaid as a child, and some conversations with other mermaid enthusiasts, this was very new to me. I was just going off of my passion for the love of everything mermaid. But one thing for sure was I knew I wanted it to be different than what was out there at the time. This was not hard at all because everything done in Key West is extremely unique, especially when it’s done for the first time.

Let’s talk about your experience as a buyer and boutique owner. How did that help you curate the aesthetics and look of the festival? Plus, merchandise.

Kristi Ann: My experience as a buyer really did help with the product and development of the overall look of the festival, as far as different media platforms go, and festival swag. Retail is definitely a strong factor in the festival and has helped tremendously since I have been in retail since I was 14. My experience with my family as wedding and event coordinators was definitely key to the success.

My background with product and development influenced many decisions when it came to creating the vision that would translate to the collective. Right down to the colors that were chosen for the festival. I wanted it to have a feminine yet masculine appeal with a hint of a traditional vintage seafaring look that would appeal to everyone. This is best represented in the three colors I choose for the festival: navy, aqua, and vintage gold. I wanted people to take a step back in time when the island was a place of mystery, wonder, prosperity, and magic. Even the conch shell on the logo, if you notice, she’s blowing it the opposite way. A mermaid with all of her magic would be able to make music in the most natural way possible with the greatest of ease. One of my favorite comments I get often is “the conch shell is facing the wrong way.” It always puts a smile on my face. It reminds me that a little mystery is always fun!

Were you surprised by the amount of media coverage your inaugural festival received?

Kristi Ann: Oh yes, I am still in shock! It all started with a call from NewmanPR to tell me that a writer from The New York Times Travel was going to reach out for an interview. Then from there it was one call or email after another from different household name publications and magazines.

What’s the No. 1 thing you recommend at the festival for a first-time attendee?

Kristi Ann: Our “Meet the Mermaids” kickoff party on July 1st at Havana Cabana is always pretty stellar in my opinion. I love watching all of the local volunteer mermaids and those that come from all over the country get reacquainted or meet for the first time. It’s almost as magical to watch as it is the kids’ faces when they see the mermaids.

Are you implementing any major changes to the festival this year?

Kristi Ann: We are going back to the Truman Waterfront Park and added an extra day for a Salty Saturday and Sunday with an ocean full of vendors to showcase their treasures. We are also having a block party with our friends at Shots and Giggles to benefit the lovely humans at Reef Relief hosted by a new nonprofit to wash up to the island: Krewe Of Thalassophiles. We are also implementing one more new collaboration, but you’ll have to swim over to our site to see the schedule of events.

Are you planning any particular partnerships for your 2022 festival?

When you launched The Mermaid Festival [2019] did you imagine a years-plus hiatus would be right around the corner?

Kristi Ann: I had no idea of what 2020 was going to hold. At the time, I was still trying to process how a poor plan that was executed, had made so much publicity, even international news, for a first-time festival. I’m not sure what was, and still is the biggest shock for me—having all of the support from my hometown, it being such a success, or pulling it off! [Laughs]

You made the decision to close your boutique on the heels of the pandemic. Talk about good timing.

Kristi Ann: My five-year lease at the mermaid boutique was up for renewal, and I found myself at the end of January 2020 having to make a decision. I had outgrown my shell and had so many exciting opportunities that had presented themself due to the success of the festival. It would have been extremely difficult to be away from or even to navigate the boutique with my new adventures. I decided not to renew.

This came as a shock to people close to me, because as usual, when making life-altering decisions, I did not talk about it. I just did it! So, I had until the end of the next month in February, and yes, as divine timing would have it, the pandemic happened the following month. Being the type of person that works hard to follow my intuition—if it feels right and positive for me — I have never been one afraid of change or taking a leap of faith. One of my new serendipitous moments [is] my own radio show “Triple Aqua,” on Party 105.7-FM, and voiceover acting just to name a couple examples.

What’s up next on your list of things to launch or try?

Kristi Ann: To be honest with you Kevin, if it feels right, I am always ready to dive into a bigger ocean whatever adventure that may be.

Best semi-private spot to lie on the beach? Definitely the beach at The Reach, after all, it is the only real natural beach on the island.

An island conspiracy you’re convinced is true? The island is definitely haunted, but not in a bad way. And mermaids exist [laughs]

Does a blacklist exist of people you will never work with? I feel that people do change, however, there are some lessons I do not want to learn again. The inside joke is I like to call it a “Motivator’s” list. A blacklist sounds very negative.

How high or low are you on the coconut telegraph? [Laughs] Who’s to say? I suppose it depends on the day.

Where are your sun and moon in your astrological chart? I’m a triple Aquarius sun, moon, and rising!

Interview has been edited and condensed. ¦

One response to “DIVINE TIMING”